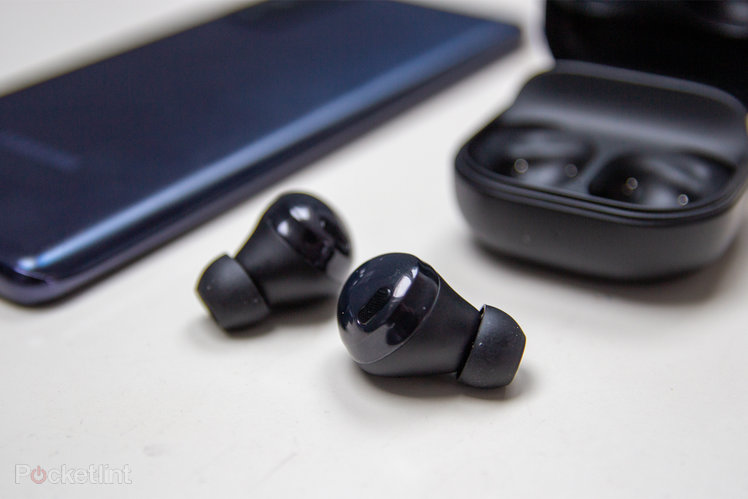 Samsung has been slowly expanding its range of headphones, leveraging the AKG brand that it acquired as part of the Harman deal in 2016.

For true wireless headphones, that’s seen the Galaxy Buds, Buds+ and Buds Live launched in recent years, with the latest Buds Pro joining the family at the top of the pile.

The Galaxy Buds Pro refine the design we’ve seen from Buds in the past; these in-ears are a conventional shape, unlike the Buds Live which had a more beans-like shape that slipped into the ears. 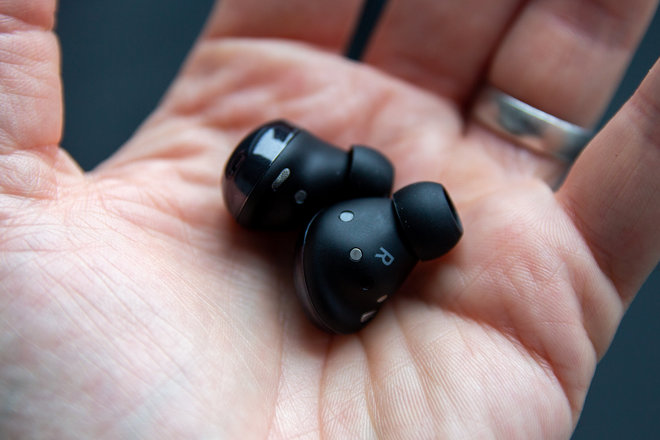 Instead, the Pro offers an oval silicon tip, with three sizes in the box, allowing you to get a good seal within your ear. The body of the Buds Pro is compact too, so each ‘bud mostly sits within the concha of the ear, with minimal protrusion.

That means the ‘buds don’t stick out much – there’s no dangly bits or anything else, which we like – and the look is rather more subtle than some true wireless headphones which want to make a statement through style.

That’s not saying that the Buds Pro isn’t stylish, just more practical rather than showy, although the glossy finish attracts fingerprints and that means constant cleaning is needed. There’s an IPX7 rating, meaning protection is provided from sweat or rain, which is good practical protection for everyday use – and higher rated than the Apple rivals, the AirPods Pro.

There are no buttons on the Buds Pro, with Samsung instead using touch-based surfaces. That can mean that you’ll accidentally touch and get an action – like your music stopping – when you’re just trying to put the headphones in or adjust them. The downside of that slightly more compact body is that getting these ‘buds perfectly seated in the ear is more of a challenge than with headphones that are a little more substantial.

If you think that Apple is the only brand that can instantly recognise a pair of headphones nearby, you haven’t been paying attention. As soon as you open the case of the Galaxy Buds Pro, you’ll get a notification on your Galaxy device asking if you want to pair – so it’s literally just a tap away and couldn’t be easier.

Samsung will also allow seamless switching between Galaxy devices, again à la Apple, but both Galaxy devices must be running One UI 3.1 – so that’s going to limit the experience slightly, unless you’re a big Samsung fan with up-to-date kit. You can of course connect to any other Bluetooth devices you want, but the native Samsung experience is going to be a little better. 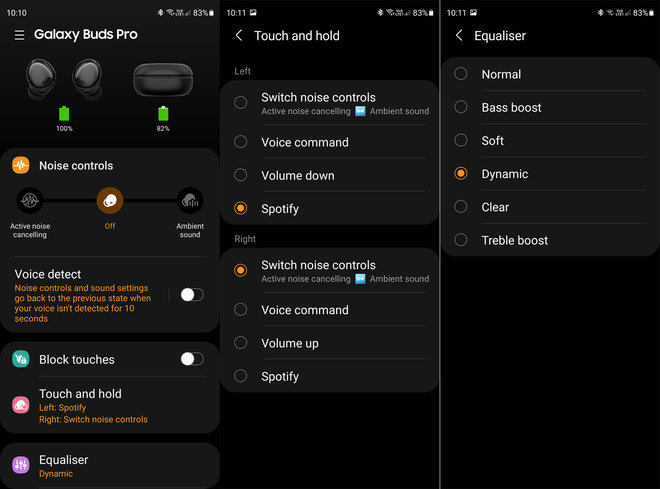 To get the most out of the Galaxy Buds Pro you’ll need the Galaxy Wearable app. This is quick to detect and manage Samsung devices. Compared to Jabra’s Sound+ app, for example, the experience is a little slicker, demonstrating Samsung’s long experience.

The Wearable app is important because it is the key to the customisation and control that the Galaxy Buds offer. That includes setting the level of active noise cancellation (ANC), engaging the various smart options on offer, updating the firmware of the headset (which can bring performance updates) and customising the touch controls.

There are left and right touch surfaces which can be customised to a degree, but you can only customise the long-press action, choosing from noise control mode, voice control, volume, or to launch Spotify (and only Spotify). You can only have one of those actions on each side, because the single-, double- and triple-tap actions to control music and calls are the same on both sides.

We’d like a little more customisation, because if you opt for on-headphone volume control, you can’t have anything else. 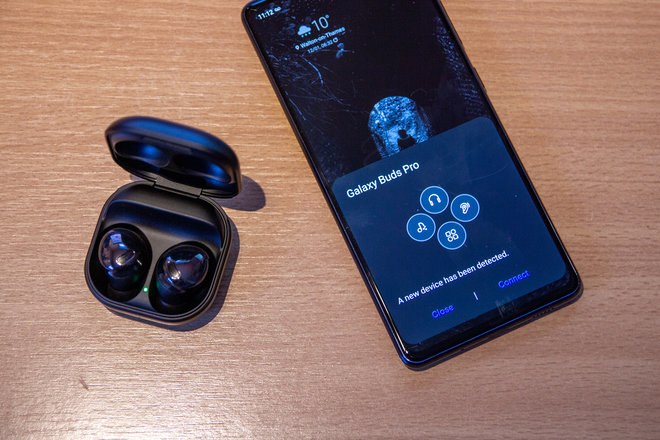 There are some smart options however, the auto mode switching perhaps being the most interesting of all. We’ve seen similar before from the likes of Sony, which can detect when you’re walking and increase the ambient noise allowed in so you feel less cut off from the world around you. But here, Samsung will switch to ambient mode when you start talking.

It’s an interesting option, because it means you can walk up and ask for a coffee at your local cafe, then your music level drops a little and ambient sound is allowed in so you can talk to the barista without having to touch your headphones. Again, it’s a practical option for those using the headphones in daily life.

The downside of this option is that if you cough, belch or start singing the words to a song, you’ll trigger that switch which can be irritating. Alternatively, you could mind your manners and not burp in public…

There’s a lot of tech in the Buds Pro, designed to improve the listening and calling experience. There are two mics on the exterior, an internal mic, and what Samsung calls a Voice Pickup Unit. These things are designed to monitor the level of noise both outside and inside to power the active noise cancellation, while the Voice Pickup Unit is designed to more accurately detect voice and make sure it comes over clearly.

Sadly, the active noise-cancellation isn’t great and having got a good fit in the ear and having tested it with a number of backgrounds – aircraft noise, passing traffic, or just someone else talking in the room – it’s clear that it’s not as effective as some rivals. Where the Jabra Elite 85t delivers a blanket of silence, Samsung’s offering just doesn’t. 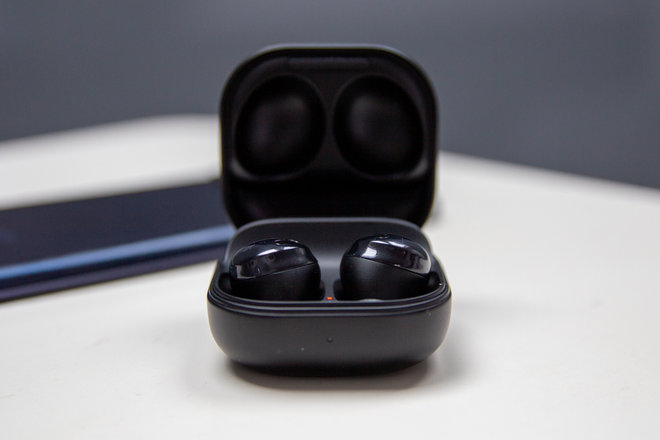 Samsung also uses tones to reflect the mode you’ve switched to, so you’ll have to learn to recognise that – we’d much prefer it if the headphones just said “ANC” or “ambient” to reflect their status, like you’ll find with, say, a Bose product.

But Samsung’s efforts around voice calling work really well. Flipping that comparison on its head, the background noise-cancelling on calls is great. That means that if you’re making a call alongside a busy road, the person on the other end won’t hear that car driving past, they’ll just hear your voice. Against those Jabra headphones, in this instance, the Samsung offering is much better.

The sound quality is actually very good too. The pairing of an 11mm ‘woofer’ and 6.5mm tweeter meaning these ‘buds can handle bass precisely without crushing the rest of the soundtrack. There’s a nicely neutral sound that’s easily adjusted using the equaliser (EQ) within the Galaxy Wearable app – and while this isn’t totally free form, it will let you shift the bias to your preference. 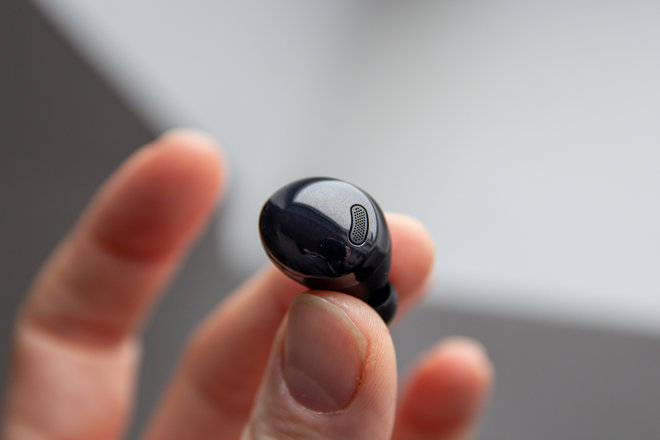 Samsung has also highlighted the wind noise reduction measures it has taken on these headphones. Thanks to the lower profile in the ear and the tech solution to filter out noise, these headphones will sound cleaner on windy days than many rivals.

When it comes to battery life, the more compact size of these headphones shows in the overall endurance. You’ll get 5 hours of listening on a single change, with up to 18 hours thanks to the recharging of the case – and this is what to expect when using ANC.

That boosts to 8 hours use (28 hours including the case) when not using ANC, which is a much more competitive figure and certainly gives these headphones better endurance than the likes of the AirPods Pro.

Charging the case is either via USB-C or via Qi wireless charging. That means that if you have a recent Samsung device offering Wireless Powershare, you’ll be able to charge your headphones from your phone on the move.