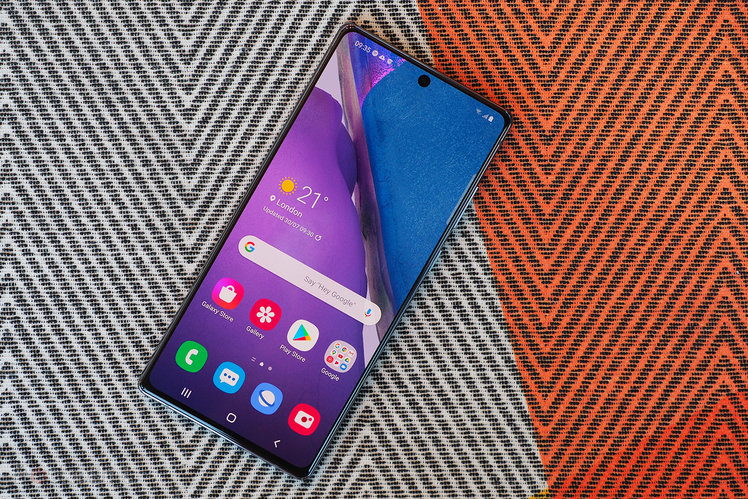 It could be easy for the Galaxy Note 20 to be brushed aside under the sheer specification boasting of the larger Note 20 Ultra model.

But you should take a moment to reflect upon what it is you most want from such a device – for the Note 20 still brings the S Pen stylus brilliance that defines this series, but at a lower price point than the Ultra because its camera and screen specs aren’t quite as high brow.

So, stylus seekers, is the Samsung Galaxy Note 20 the more sensible flagship choice? Or is its apparent absence of any big, new killer feature going to cost its appeal?

Although described as the ‘smaller’ Note – its 6.7-inch screen is a bit less expansive than the 6.9-inch one in the Ultra – there’s no escaping that this just isn’t a small device. Nor should it be; the Note has always been large, it’s pretty much the series that established the acceptance of larger phones (or ‘phablets’, to coin the term used back then – all nine years ago when the Note series first launched). 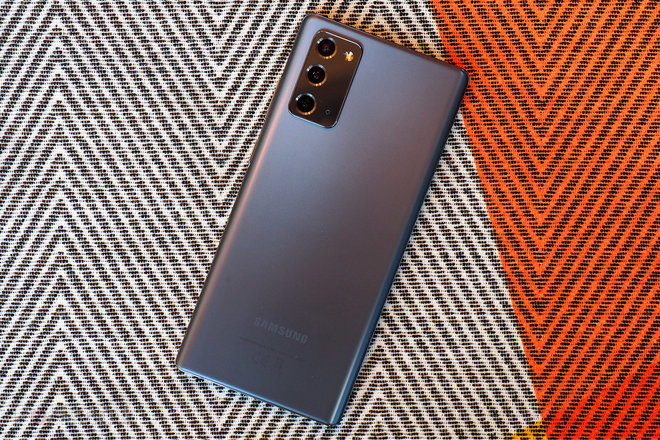 Funnily enough the Note 20 is actually a smidgen thicker than the Ultra version (8.3mm vs 8.1mm) – but you’d never know because the Ultra has a whacking great big camera protrustion, whereas this smaller Note is a much neater and more considered take on an otherwise similar design.

For 2020 the Note is going all ‘mystical’ – at least in terms of the marketing names for its colour palette of finishes. There’s a Mystic Green (which we’re yet to see), Mystic Grey (pictured – it’s not a dull grey by any means), and Mystic Bronze (shown in the S20 Ultra review – it’s more a rose gold to our eyes though). There’s no Mystic White or Mystic Black option here as you’ll find in the pricier Ultra.

There’s also no glass rear finish. Instead it’s what Samsung cringely is calling ‘glasstic’ – a sort-of-feels-like-glass-but-it-isn’t plastic. Having handled the Note 20 and the Ultra (the latter being Gorilla Glass 7 on the rear), we have to say the feeling of the Note 20 does a good job of feeling similar. Not the same, mind. So, in isolation, we doubt you’d feel like you’ve drawn the short straw. But why such a finish is necessary for a pricey flagship phone is the bigger question really. 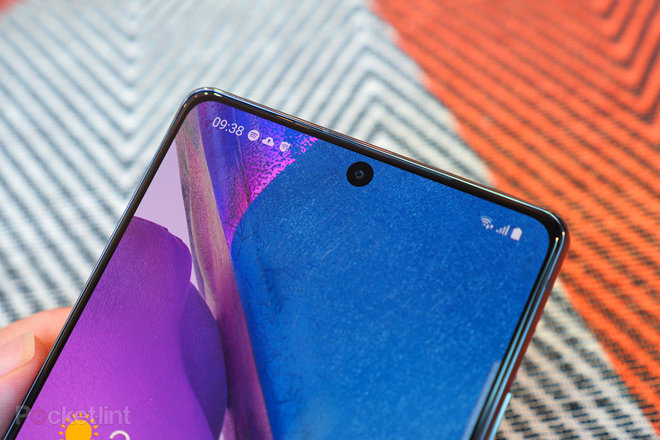 The Note 20’s 6.7-inch screen is a decent size in today’s smartphone world. It gets a whole lot right too. It’s Super AMOLED, so blacks are black and colours pop. It’s flat, so you won’t get any accidental presses. It’s really bright, too. Although the resolution is less than the Ultra’s, we doubt you’ll really notice – in part because, by default, the Note 20 series isn’t set to full resolution within its settings, based on the preview devices we saw ahead of the launch event. Oh, and the punch-hole camera is a little larger than we’d like.

What the Note 20 lacks, however, is a faster refresh rate panel. Samsung has stuck with a 60Hz screen here, which is behind the curve compared to the 90Hz/120Hz offerings of other flagships. It’s not a deal-breaker, because the smoother visuals from such a higher refresh don’t benefit everything – you’re more likely to notice it scrolling through Twitter than when gaming – but, again, this is a flagship device that’s lacking a now common flagship feature. We think this should be a 90Hz dynamic panel, which would be more in step with the series.

Tucked into the base of the Note 20 is an integrated stylus pen, which Samsung calls the S Pen. It’s got inductive charge technology, so you’ll never need to worry about the battery within – the phone handles that part for you. 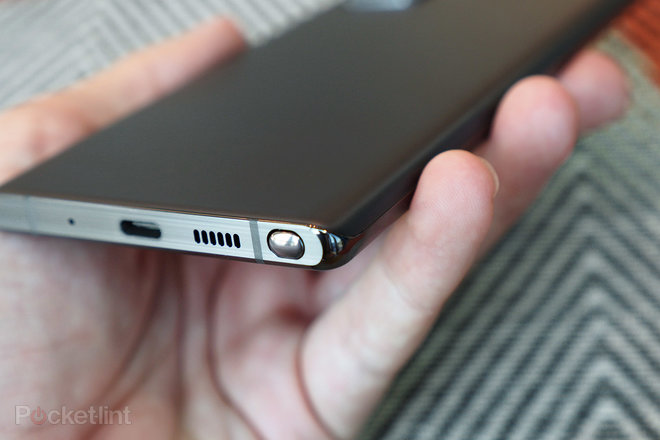 For 2020 the S Pen is even more responsive in combination with the Note 20, with a 47 millisecond latency – which is said to be a 40 per cent improvement over its predecessor. It’s not nearly as snappy as the Note 10 Ultra‘s 9ms latency though.

It also expands on the Note’s biggest gimmick: Air Gestures. With the S Pen in hand you can wave it about in the air like a magic wand to get the phone to perform certain tasks. Or you can try – you’ll often fail and need to repeat a gesture again. As we said of these gestures in the past, they’re gimmicky. The idea might be solid, but the delivery is not.

But where the Note 20 really shows its strength is with Samsung’s Notes app. This is bread and butter stuff for this device, but it’s a critical point of difference to what so many competitors can’t do well: handwriting uptake, recognition and conversion into useful formats. For 2020 there’s auto-straighten to tidy things up, a new folder system for organising, and a Microsoft partnership means OneNote, Outlook and more will be directly supported with Notes from later in 2020. 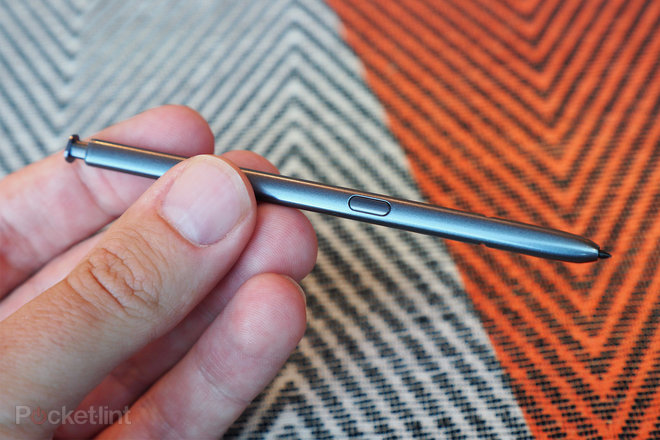 As we said of the Note 20 Ultra, the smaller Note 20 delivers great core stylus features and controls – and that’s the main reason to buy this device over any another.

The camera unit on the rear of the Note 20 arranges the triple lenses in a nice and uniform fashion – importantly on a bump that doesn’t protrude excessively, unlike the massive one on the Ultra model. The Note 20 is a much neater design and we prefer it for that. 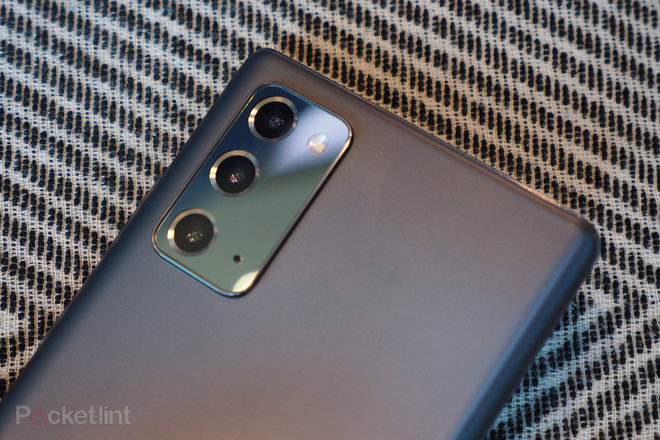 However, the Ultra has the more significant zoom, higher megapixel count, and a better laser autofocus system. But we don’t think this ‘normal’ Note 20 should be disregarded as a result.

For starters its zoom lens has a 64-megapixel sensor at the receiving end, capable of 3x optical zoom (or you can extend to 30x hybrid/digital zoom – not the far-fetched 100x ‘Space Zoom’ of the S20 Ultra, which was overreaching and then some). That’s a lot of resolution to play with, which works well for both optical and digital zoom purposes.

Then the resolution drops for the main sensor, which is 12MP, as is the separate wide-angle camera with its twice-the-field-of-view perspective onto the world. 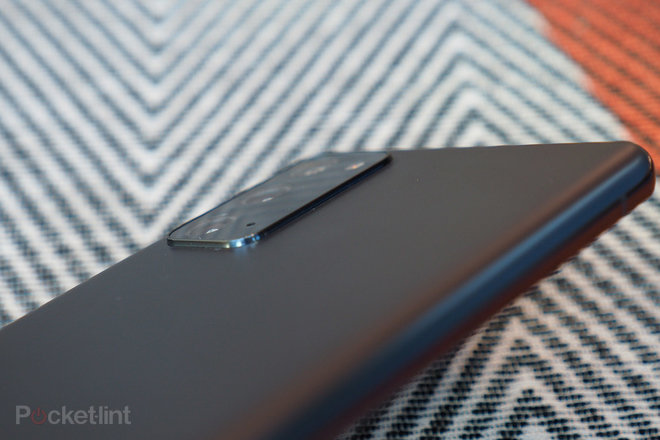 We’ve only had a brief play around with this camera system, so can’t deliver final comment on just how well it will perform in various conditions. We’ll be diving into much more detail after obtaining the phone for a full review.

Behind the scenes the Note 20 very much delivers on its flagship promise – and it’s very close in specification to the Ultra model. If you’re in the USA then it comes with the best available chipset for a mid-2020 launch: the Qualcomm SD865+. For those of us in Europe we get Samsung’s equivalent top-end Exynos, the 990. The 8GB RAM is nothing to shake a stick at either. 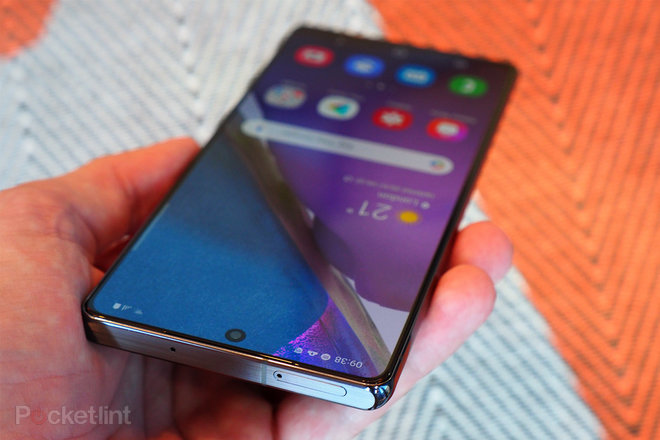 Our initial experience with the Note 20 has shown it to be fast and fluid. Loading apps, taking notes, switching between screens and stylus – it’s all super smooth here.

The battery capacity, at 4,300mAh, is considerably increased upon over the previous Note 10 model (3,500mAh) – which is a good job, as we just didn’t find that phone to last quite long enough based on our original expectations. The fast-charging tech remains the same as the last generation though – it’s still 25W – but that should be plenty for most people to not have to tap their feet while waiting for a top-up. 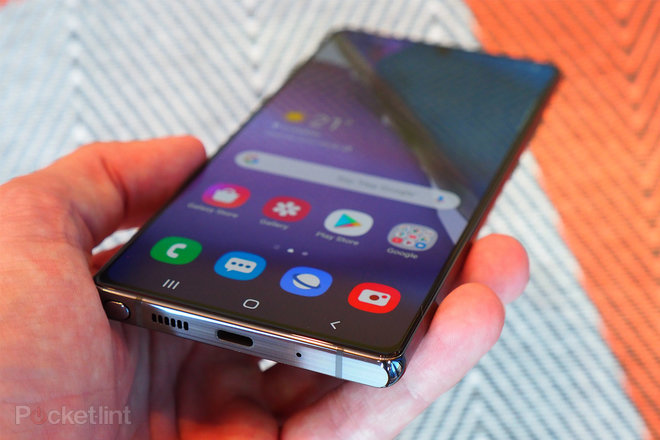 While all Ultra models come with 5G connectivity as standard, the ‘normal’ Note 20 comes in both 4G and 5G options – which we think, given the current climate, is the absolute right move to take. As few live in 5G network areas and aren’t likely to be rushing into cities and such hotspots in the immediate future, a 4G handset simply makes a lot more sense for the cost savings.

Which comes to a final point – the Note 20’s price. It starts at £849 / €949 for that 4G model. It’s not far off the four-figure asking price, so it’s certainly not cheap, but as stylus-toting phones go you’ll struggle to find anything that can compete (save for the pricier yet Ultra).