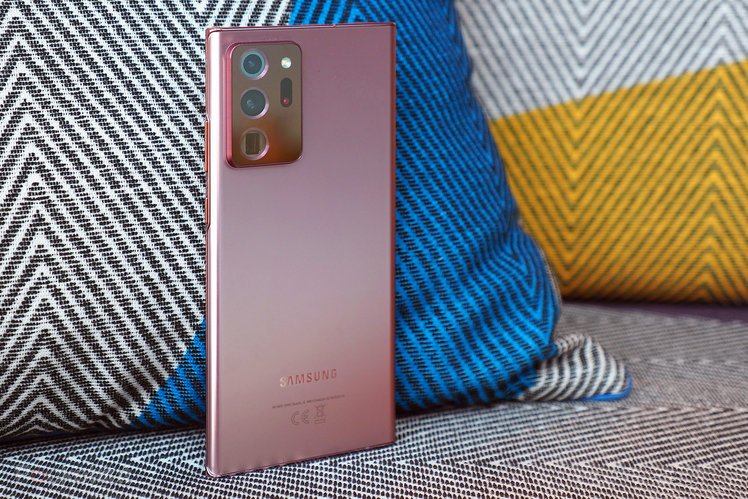 The Samsung Galaxy Note series is almost a decade old. Within that time-frame the stylus-donning handset has brought forth plenty of new technologies – such as curved screen and edge control – which have, perhaps unsurprisingly, become the relative norm in smartphone land.

As a result the Note 20 Ultra – the 2020 flagship in Samsung’s Galaxy stable – was touted as “just another Note” long before even being unveiled, given the lack of any real killer new feature to lure the punters in.

Rather than take the cynical view, however, we can see why that’s actually positive sentiment – because the Note 20 Ultra is ticking all the right boxes in a now established format that its competitors are keen to emulate. But not one has managed that task to date.

So is the Samsung Galaxy Note 20 Ultra the ultimate flagship for those seeking a handset with an integrated stylus? Or is its apparent absence of any big new feature and focus on expanding some gimmicky features (Air Gestures, we’re looking at you) going to cost its appeal?

As you might have gathered from the Ultra name, there’s also a ‘normal’ Note 20 – which is a little smaller in stature, cuts back on some of the higher-end finish options and camera setup, and manages to slot in under the four-figure asking price (not that it’s cheap by any means).

But back to the Ultra. Which, for 2020, is going all ‘mystic’ – as there’s Mystic Bronze (pictured), Mystic Black (it’s very black), and Mystic White (very white – but not available in all regions, so Samsung tells us). The bronze is more peach/gold in our view, but that’s long been a colour of appeal in recent years. There’s no flashy, ultra-shiny, rainbow-like or fluorescent finishes this time around – which is probably for the best. 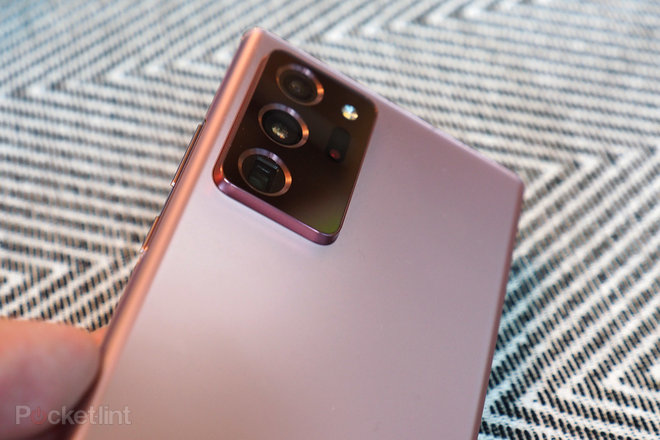 Samsung says the rear – which is coated in Gorilla Glass 7, just as the front is – has a new ‘textured haze’ finish, which helps to cut down on fingerprints and smudges. This bronze finish does reasonably well in that regard, but the black version doesn’t survive the fingerprint smear challenge quite as well it must be said.

Being Ultra by name, this Note is ultra by size. Its 6.9-inch screen sounds relatively humungous, but it’s not unwieldy. We had thought that the Note 10+ was a bit too wide, having lived with that in 2019 for some weeks, but that’s just the new normal – as the Note 20 Ultra shares exactly the same 77.2mm width.

The Ultra’s screen gets a whole lot right too. It’s Super AMOLED, so blacks are black and colours pop. It’s got curved edges, but these don’t suffer from excess contrast fall-out from what we’ve seen so far. It’s really bright, which is almost becoming a Samsung trademark. There’s plenty of resolution (it’s not maxed out by default though) and even a dynamic refresh rate. 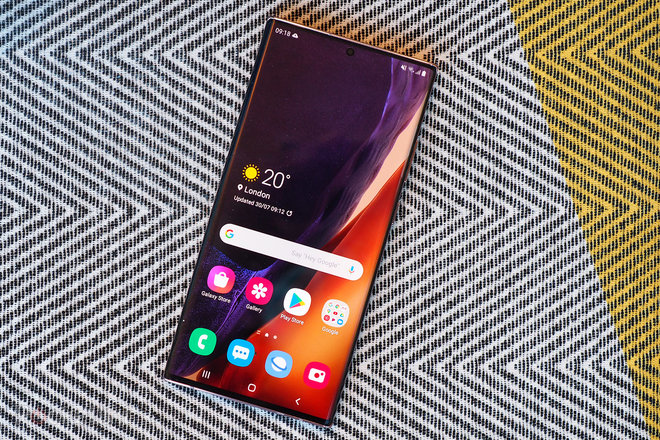 The maximum refresh is 120Hz, meaning 120 cycles every second. This helps create smoothness when, say, scrolling in a social media app. It’s also beneficial for higher frame-rate games, if your eyes are astute enough to tell the difference. Want to save battery? Stick to the 60Hz option. It’s also a curiosity that Samsung doesn’t enable 120Hz full time – it’s dynamic only, i.e. the software will determine whether it’s 12Hz, 30Hz, 90Hz, or whatever it deems necessary for optimum performance – so we’ll have to see how this works with various third-party apps in practice.

We’ve mentioned width already, but it would be amiss to not address the elephant in the room: the Ultra’s rear camera unit protrusion. It’s huge. There’s an excuse for this: the Note 20 Ultra’s main body is slimmer than its predecessor, therefore it’s generally more comfortable to hold and not as heavy overall. But as a result you have a hulking-great camera unit popping out from the rear.

Tucked into the base of the Note 20 is an integrated stylus pen, which Samsung calls the S Pen. It’s got inductive charge technology, so you’ll never need to worry about the battery within – the phone handles that part for you. 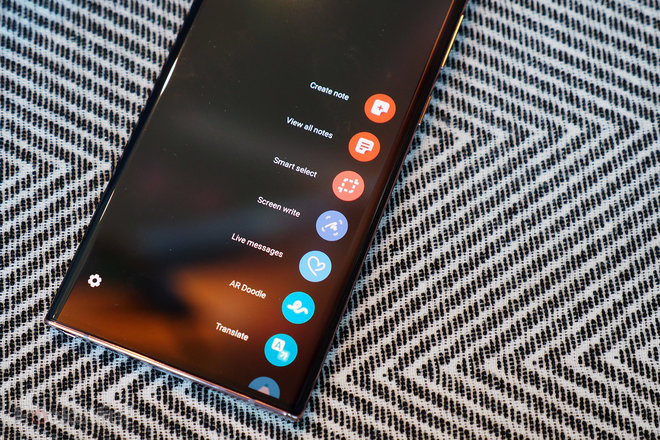 For 2020 the S Pen is even more responsive in combination with the Note 20 Ultra, with just 9 millisecond latency, which makes for a near-immediate response when scrawling notes, doodles and whatnot onto the screen. Despite the stylus being small, it’s easy to use, fast and efficient.

It also expands on its biggest gimmick: Air Gestures. With the S Pen in hand you can wave it about in the air like a magic wand to get the phone to perform certain tasks. Or you can try – we’ve often failed and needed to repeat a gesture again. We don’t think many people will use this feature – stick to the physical points of contact instead – which is far more reliable. The idea is solid, the delivery is not.

But where the Note 20 Ultra really shows its strength is with Samsung’s Notes app. This is bread and butter stuff for this device, but it’s a critical point of difference to what so many competitors can’t do well: handwriting uptake, recognition and conversion into useful formats. For 2020 there’s auto-straighten to tidy things up, a new folder system for organising, and a Microsoft partnership means OneNote, Outlook and more will be directly supported with Notes from later in 2020. 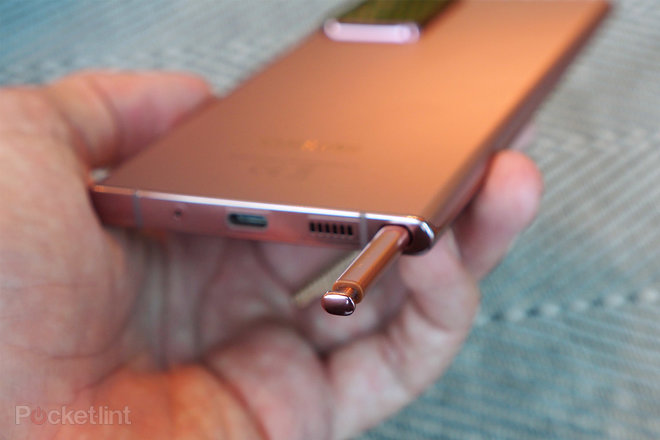 The Note 20 Ultra delivers great core stylus features and controls – and that’s the main reason to buy this device over another, such as a Galaxy S20.

Speaking of the S20 series, the Note 20 Ultra has picked some of the headline-grabbing features from the S20 Ultra too. For starters there’s a 108-megapixel main sensor – but in the Note Ultra this is used as the main sensor, not as the primary zoom sensor. 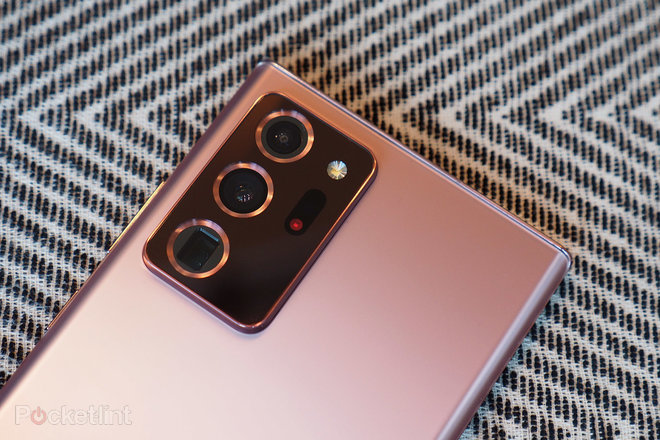 For zooming a new 12-megapixel sensor is on board, capable of 5x optical zoom (or you can extend to 50x hybrid/digital zoom – not the far-fetched 100x ‘Space Zoom’ of the S20 Ultra, which was overreaching anyway).

A wide-angle camera delivers twice the field of view of the main sensor, also delivering a 12-megapixel resolution.

While there’s great potential in these three cameras – the 108MP main is physically massive and uses pixel combining for improving results, for example – we’ve only had limited time at Samsung’s London KX store to briefly explore how they function. We’ll be diving into much more detail when obtaining the phone to see whether real-world practicality is high up the list.

To the side of those three cameras – which are arranged horizontally on the rear – there’s also a laser autofocus system that’s only found in the Note 20 Ultra. It’s super-fast to respond and should deliver speedy re-focusing in live video – which is also something we’ll be testing more thoroughly when we have the handset on test. 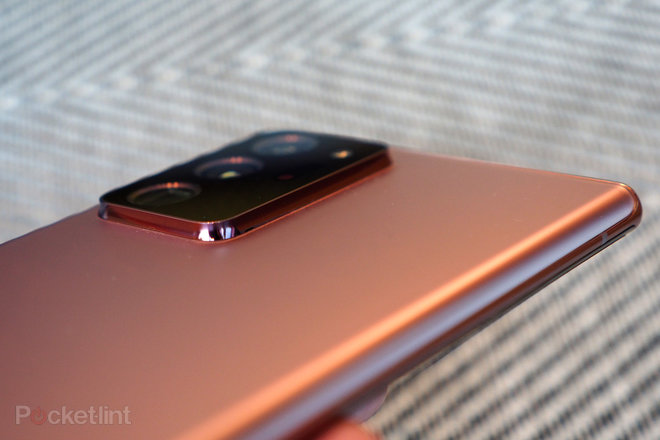 But before we close out this section of this review, we have to come back to the design of the camera unit. The rear protrusion is really massive. Sure, the main body of the phone is slimmer than the previous Note device – but we think a slightly thicker body to hide that camera lump wouldn’t be a bother for us, plus it could be used to squeeze in yet more battery capacity, as one practical example.

The standard Note 20’s camera arrangement is far smaller, because its feature set isn’t quite as high grade – but that only makes the Ultra’s arrangement that much more, um, eye-catching. That said, we thought the Apple iPhone 11 Pro Max‘s camera arrangement was ugly when that launched, but that’s not stopped it from being hugely popular. That’s probably the general thought process: it’s forgivable if the results are superb, right?

Behind the scenes the Note 20 Ultra very much delivers on its name. If you’re in the USA then it comes with the best-available chipset for a mid-2020 launch: the Qualcomm SD865+. For those of us in Europe we get Samsung’s equivalent level Exynos chipset, the 990. The 12GB RAM is nothing to shake a stick at either. 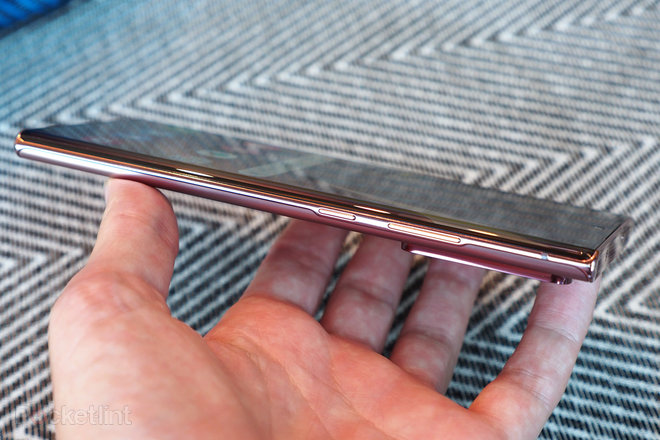 Our initial experience with the Note 20 Ultra has shown it to be fast and fluid – a combination of refined software, that adaptive refresh rate, and the display just looking so outright striking. Loading apps, taking notes, switching between screens and stylus controls, it’s all super smooth here. How some more hardcore apps and loading considerable numbers of them will affect performance we’ll be testing in the future.

The battery capacity, at 4,500mAh, is slightly up on the previous Note model. It’s a relatively large capacity, but with so many features in this powerful device it’s anyone’s guess how that’ll perform. The fast-charging tech has actually decreased in speed too – it’s 25W, down from 45W maximum – presumably in order for Samsung to preserve battery life longevity and provide a longer-life experience.

Interestingly, despite an entry 256GB storage (UFS 3.1), there’s also a microSD card slot to expand upon that (something which the standard Note 20 doesn’t offer). 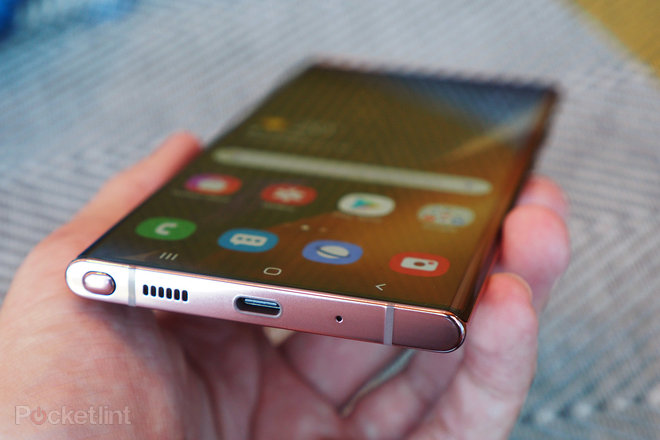 All Ultra models come with 5G connectivity as standard, whether you like it or not. We don’t think 5G is necessary in the current climate’s limited access to city-focused areas – and the premium you’ll pay for it isn’t appealing.