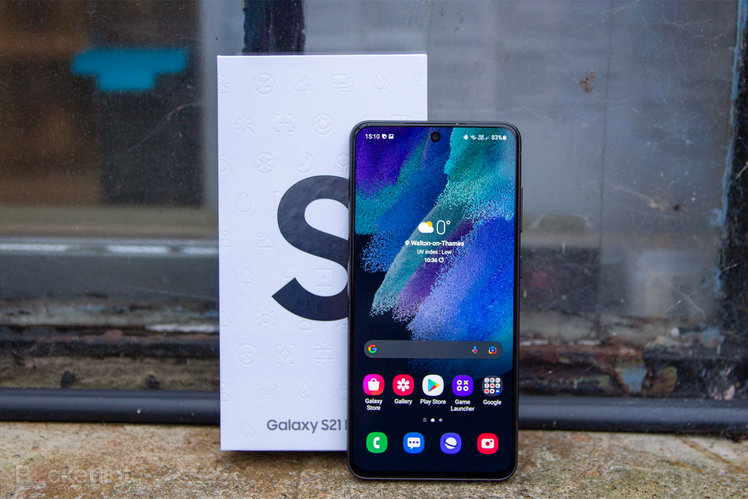 Samsung seems to have adopted the FE – ‘Fan Edition’ – as a good thing, using it as a method of bringing another device to market with more aggressive pricing, once flagship models are out of the way.

As with the Samsung Galaxy S20 FE, the Galaxy S21 FE arrives as if popped out of the S21’s mould, with a cheaper price, a few tweaks here and there, but very much the same experience.

Thing is, the timing of the arrival of 2022’s Fan Edition raises a few questions: the S21 models aren’t much more expensive, while the Galaxy S22 is due to launch in February, so does this delayed handset hold any worth? 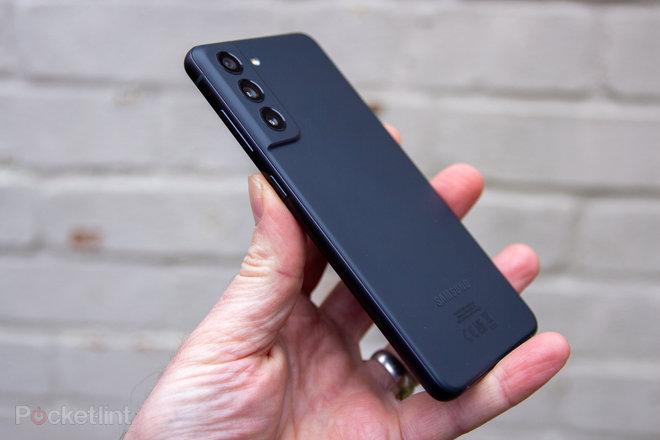 The other minor difference is that the Galaxy S21 FE is pretty much flat on the rear, whereas the S21 models curve slightly into the frame on the trailing edge. Given the size of the S21 FE, this doesn’t make much of a difference – indeed, we like the symmetry of its design.

The S21 FE will come in four colour options – Olive, Graphite, Lavender, White – so there’s not the same massive variety that there was for the S20 FE, but we suspect the Graphite (which is really just ‘black’) shown here will be the most popular. 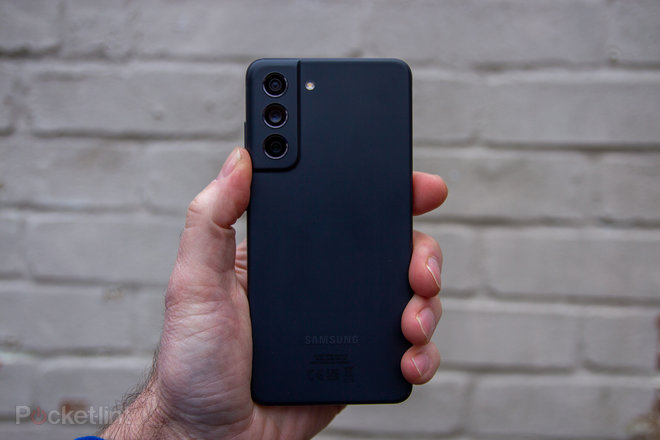 It’s a good-looking phone, despite having a plastic back, but it still feels solid and the matte finish is welcomed.

To give some protection, there’s an IP68 waterproof rating – so it can be fully submerged in up to 1.5m of water – while the display is covered with Gorilla Glass Victus, which is the top grade from Corning and should help keep scratches off. There’s no factory-fitted screen protector and after a couple of weeks of use we’ve seen a scratch on the display, so a case is well worth considering to keep it looking its best.

With a 6.4-inch display, the Samsung Galaxy S21 FE slots in-between the two smaller Galaxy S21 models. It’s a flat display, with a single punch-hole camera that’s centre aligned at the top of the panel. 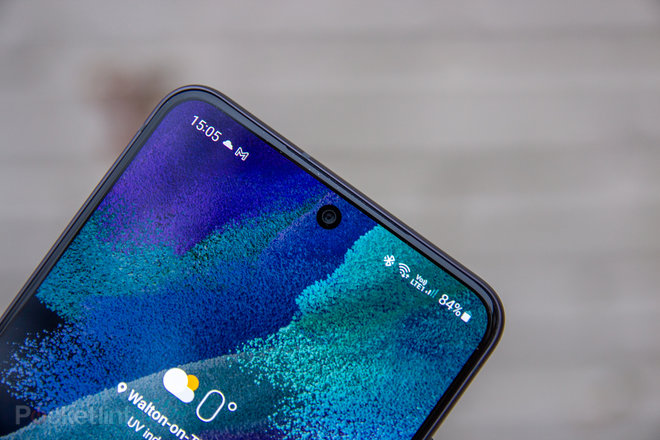 As is customary from Samsung it’s an AMOLED panel – or ‘Dynamic AMOLED 2X’ as Samsung calls it – with the choice of 60Hz or 120Hz refresh rates. This doesn’t offer the same adaptive refresh rates offered by the Galaxy S21 models, not that that seems to make a huge difference in use.

But it does carry that AMOLED look that’s so favoured in smartphones, with deep blacks and vibrant colours. On the flip side it can ramp up the brightness to cut through reflections, so it looks good pretty much all the time.

One of the changes compared to the previous version of this phone is a slight reduction in the width of the top bezel. 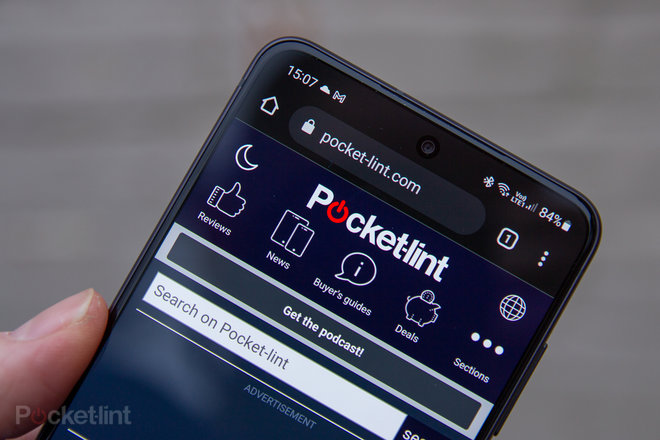 Another one of the interesting things is that Samsung ships the FE with on-screen navigation as default, meaning you have to switch to Android’s gesture navigation in the settings if you would rather use that. The narrow bezel at the bottom of the phone makes gesture navigation a little more fiddly than some devices we’ve used – and occasionally we’ve found ourselves scrabbling to swipe out of an app with the S21 FE not registering what we’re doing after a few attempts.

There’s also an in-display fingerprint scanner, which is generally a good performer, quick to register prints and quick to unlock, so we have no complaints on that front.

True to form, Samsung launched the Samsung Galaxy S21 FE saying that it was powered by a 5nm octo-core processor, rather than specifying the details. Again, it’s a device that might have Qualcomm Snapdragon in one region of the world, but Exynos in another.

Either way, the S21 FE performs like a flagship device. It’s fast to open apps and smooth moving around the user interface. At this size, it’s pretty compact for a flagship-grade device too.

We don’t think it’s the best for gaming, as Samsung’s gaming additions don’t seem to be quite as well considered as some competitors. Despite disabling navigation gestures in the Game Booster settings, a swipe in from the edge will see the system bar (the bar at the top) reappearing. In a game like Call of Duty Mobile, it’s constantly appearing at the top when you don’t want – and that’s a distraction. But, generally speaking, this device has no problem offering a premium experience in the most demanding apps.

There are choices to be made for RAM and storage – 6/128GB or 8/256GB – although that lifts the price, making it very close to the S21 proper. There’s also no option for microSD storage expansion, which there was on the previous device, so that’s a loss you’ll feel on the storage front. 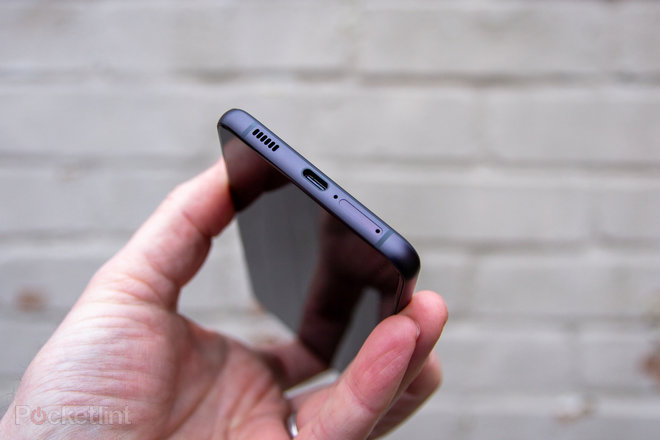 The battery is a 4500mAh cell with support for 25W wired charging and 15W wireless charging. These aren’t the fastest rates out there and there’s no charger in the box, so if you want faster charging, you’ll have to head out and buy a compatible charger.

Battery life has generally been good enough. Samsung isn’t renowned for longevity from its devices (the brightness of the display often has a pretty big impact on battery) but this phone will see you through a typical day. That said, there’s no shortage of competitors out there will bigger batteries at lower prices.

There’s a fairly predictable collection of cameras on the Galaxy S21 FE: the main camera is Samsung’s Dual Pixel 12-megapixel sensor with an f/1.8 lens, which we’ve seen on a lot of Samsung phones and it’s similar to the Galaxy S21 and S21+

One change is the telephoto lens, which here uses a 12-megapixel sensor rather than the 64-megapixel sensor on the Galaxy S21. One of the details you miss with this switch is that there’s no option to shoot 8K video here, not that that really matters right now.

In function the Galaxy S21 FE is a comprehensive camera offering with plenty to satisfy smartphone photographers. There are no junk lenses here – no depth or low-res macro nonsense – they all pull their weight. The zoom is useful, but at the 30x digital option you’re left with a pretty mushy image, so you’re better sticking to way less than maximum to get the best results.

Across the cameras you can see Samsung’s user interface (UI) working hard to give you a better shot. Whether that’s the stabilisation options on the far end of the zoom, or the HDR (high dynamic range) on the front-facing camera – which will snap a picture of you and then take that over-exposed white sky and return it to blue – the aim being to give you photos that look good.

At times things are a little richer than in real life, but that means what might have been a dull photo gets a little pop – and we can’t complain about that too much. As far as overall performance goes, the Galaxy S21 FE is close to the S21 models we saw earlier in the year, with things like portrait mode putting in a solid performance. The same applies to low-light photos: while we’d pick the Google Pixel 6 over the S21 FE for such situations, you can still get great results from this Samsung.

The front camera is 32-megapixels in resolution. We can’t really understand why Samsung is opting for more megapixels on the front camera. There’s even the option to shoot at full resolution and we can’t see why anyone would seriously want to do that. But the front camera will give you a decent selfie – and at the lower resolution output, by default – and is pretty smart with edge detection to give you that bokeh portrait effect if that’s what you’re after.

The software loadout of the Samsung Galaxy S21 FE is up to date, arriving with Android 12 out of the box. Samsung has also done well with updates over the past generation of phones, which bodes well for the future of this device in the coming years. 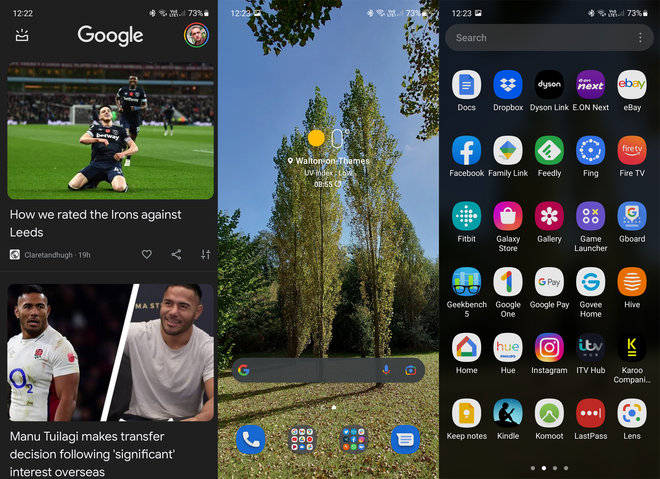 We’ve long been fans of Samsung’s software offering, as it provides plenty of options for customisation, including some lifted from Android’s new Material You offering, where you can easily change the colour palette to match the wallpaper.

Samsung’s One UI remains one of the most comprehensive reworkings of Android and years of Samsung phones have led to this point. While other brands talk about the options and customisation they offer, Samsung has often had something in place for some time – with a wide range of integrated features boosting the offering for those sticking to the Samsung ecosystem. That means even more seamless operation with things like Samsung’s Galaxy Buds headphones or its TVs.