Rumors suggest that Samsung will launch its next Galaxy S flagship earlier than other years, which means that we will most likely start getting tons of new rumors concerning the Samsung Galaxy S21 or S30 series. The latest leak may be the biggest one we could expect before the new flagships are launched. It includes every important spec and feature, months ahead of the phones’ launch.

According to the latest information posted by the guys over at Android Police, the new Samsung Galaxy S21 series will include three devices with different display sizes and a couple of interesting features. We will start with the base model of the Galaxy S21, which is codenamed O1. This device is said to come with a 6.2-inch FHD+ LTPS display with a 120hz refresh rate. Inside, we will get a Qualcomm Snapdragon 875 in the US version or an Exynos 2100 in the device’s international version.

The Galaxy S21 Ultra will have a 5000mAh battery, and it would work with One UI 3.1 based on Android 11. Its camera is expected to feature a 12MP Ultra-Wide sensor, a 12MP main, and a 64MP telephoto. This would also be the variant with the most color options, as it will be available in Phantom Violet, Phantom Pink, Phantom Gray, and Phantom White.

Next up, we find the Samsung Galaxy S21+, codenamed T2. This device will share the same processor, software, and camera setup as the entry-level version. However, it will feature a larger 6.7-inch display, a 4800mAh battery. It will be available in three color variants: Phantom Silver, Phantom Black, and Phantom Violet. 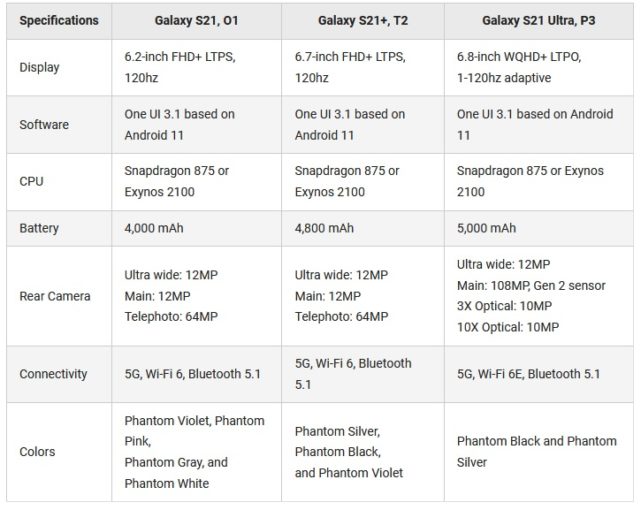 Finally, the Ultra variant of the Samsung Galaxy S21 is expected to arrive with the largest display of them all, as it is said to feature a 6.8-inch WQHD+ LTPO display and an adaptive 1-120Hz display. The new Galaxy S21 Ultra will also include a 5,000mAh battery and a powerful camera that includes a 12MP Ultra-Wide sensor, a 108MP Gen 2, a 3x optical 10MP, and a 10x optical 10MP camera sensor, which could be the strogest optical zoom system available according to @IceUnicerse. Now, color options are limited, with a Phantom Black and a Phantom Silver to choose from.

Another feature that will be present across the board is 4K/60fps recording, and the cameras will be able to switch automatically between 30fps and 60fps depending on lighting conditions. 8K at 30fps is also available, replacing the 8K at 24fps featured in the Galaxy S20 series. The guys at Android Police confirmed the design of the Galaxy S21, and they also claim that they have confirmed all the information in this leak through multiple sources.