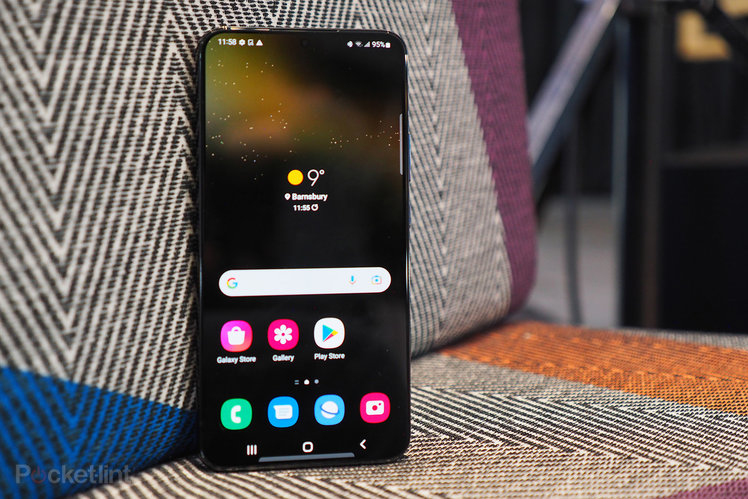 Samsung’s flagship Galaxy S series line-up for 2022 delivers three different phone sizes: the smaller 6.1-inch S22 model, the mammoth 6.8-inch and curved screen of the S22 Ultra (complete with integrated S Pen stylus) and the flat-panel 6.6-inch S22+. Given this Plus model’s place in the trio, it might well sit in the ideal sweet spot for many people.

Much like we said about the smaller S22, the S22 Plus is all about subtle refinement, moderately shrinking the handset’s screen size and overall scale compared to its S21+ predecessor, while tweaking the camera arrangement, too.

Do those changes help this mid-positioned flagship stand out from the other two S22 models in the trio and, indeed, the recent release of the S21 Fan Edition model? Or does it feel as though the S series has plateaued and has little new to offer in the way of killer features?

Sometimes you have to go back to go forwards. After a spate of handsets expanding their scales and bending their screen edges to greater extremes, the Galaxy S22+ shuns that way of thinking. That’s because this Plus model is actually a little ‘minus’ compared to its S21+ predecessor, shrinking the screen size from 6.7- to 6.6-inches.

That panel size – and the fact it’s a flat screen here, as the corners and edges don’t bend around the phone to try and look all fancy for no real reason (like the S22 Ultra) – ought to give the Plus model immediate appeal to those who want a sensible balance of scale.

Moreso than the panel size’s reduction, however, is squashing of the physical dimensions by a few millimetres here and there compared to the S21+. That has resulted in a squeeze on the S22+’s battery capacity, though, which is reduced by just over 6 per cent overall. That’s not really the general trend of smartphones, and, while the hardware is increasingly efficient year on year, demands are only on the increase when it comes to the battery. 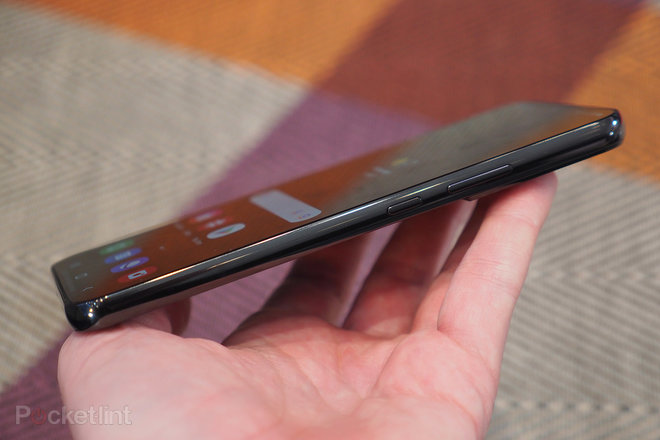 Otherwise, in terms of design, you could look at the S22+ and assume it was the S21+, albeit a whisker smaller. However, that doesn’t mean the same plastic rear as before – it’s glass this time around right across the range. There’s recycled plastic inside, while an aluminium frame make-up the core, all dressed up in an attractive style, which is available in four colour options (the black photographed here, perhaps the least interesting of the lot). We do think the colours, which are altogether less bling, make the camera unit appear even better integrated, too.

There’s quite an edge around it due to the flat nature of the screen, we’d say, and some might find it a little less comfortable than gripping something with curved edges. That being true, if you’re using a case, you’ll likely never notice that subtle difference.

We’ve handled all manner of phones over the years, with manufacturers experimenting with aspect ratios, curved edges, and differing scales. The Galaxy S22+ seems like a voice of reason in among all that testing and experimentation over the years: it’s like a handset that says, “Hey, this just works”, delivering a flat panel, fast refresh rate, and a scale that’s large but manageable in one hand without needing an overly long aspect ratio to counter for anything. 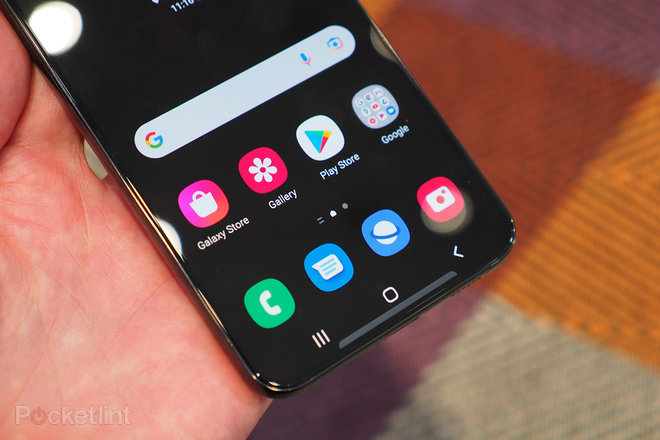 That said, the Galaxy S21 FE hasn’t long been available, offering a 6.4-inch panel – so if you’re after something a tad smaller, without venturing down to the base S22 scale, then there could be appeal there, as well. It does beg the question as to why Samsung has so many S series handsets, especially when the Fan Edition model arrives so late it almost overlaps with the next-gen release proper. Anyway, the choice is there, and choice can be a good thing.

If you’re looking for bigger still, then we wouldn’t rule out the S22 Ultra’s appeal, which, at 6.8-inches, is even larger, but it is a curved edge panel and thus feels really different to hold. Flat seems largely on-trend, as curved displays can cause issues with accidental touch, contrast and colour fall-off towards those extremities – all things to consider when choosing your next phone.

Flat isn’t the word that we’d use to describe the visual experience offered by the Galaxy S22 Plus, though, even if it is a more boxy feel. The use of AMOLED display technology and a decent resolution ensure the delivery of punchy colours and crisp detail. That said, there are no additional pixels here to compensate for the larger screen real-estate compared to the base S22 model. Having handled all three S22 models, however, we can confidently say you won’t look at any and think they lack. 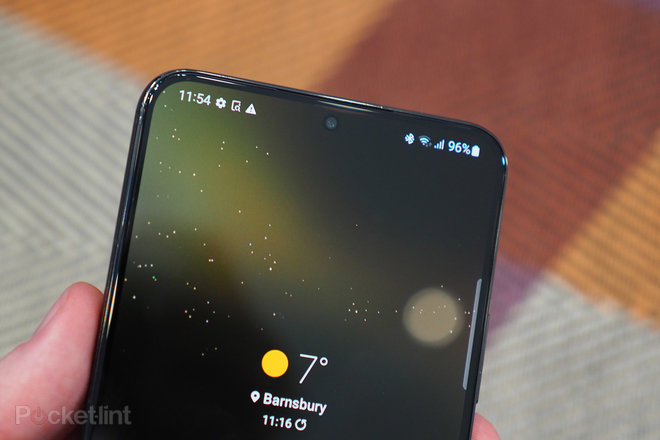 Samsung also hasn’t gone overboard when it comes to the refresh rates, offering a dynamic 120Hz panel, so the S22+ can automatically adjust whether it’s refreshing that screen 10 times every second or up to 120 times – it all depends on whether the content needs that additional cycling to appear visually smoother.

Samsung’s phones have long led the way in displays, and stepping out into bright sunshine shows off the great peak brightness that’s on offer to cut through reflections. Samsung does tend to sit on the bright side, which means content looks great, but this does also has an impact on the battery life. It’s easy to knock down a little, but we’ve frequently looked at the phone first thing in the morning and thought it was just too bright.

Speaking of battery, the 4,500mAh cell on board here has slimmed down a little. While Samsung is convinced that the optimisation of this device counters that slight shrinkage, there are plenty of devices of this size with larger batteries. In practice, you’ll find that it performs well enough and it will get through a day without causing any concerns – as long as you’re not hammering it with Call of Duty Mobile, of course.

There’s also 45W wired and 15W wireless charging to cover all bases, but there’s no charger in the box. Is that a big deal? It’s a divisive issue, but with any number of devices now coming with a USB-C charger, it’s likely that your laptop or tablet charger might power this phone. Still, if you want the fastest charging rates, you’ll need to use the right charger, although we’re still some way from the much more impressive charging offered by other brands. Samsung might feel like it’s lagging behind in that regard, but much depends on how you charge your phone and how often you find you need it to be recharged really quickly. 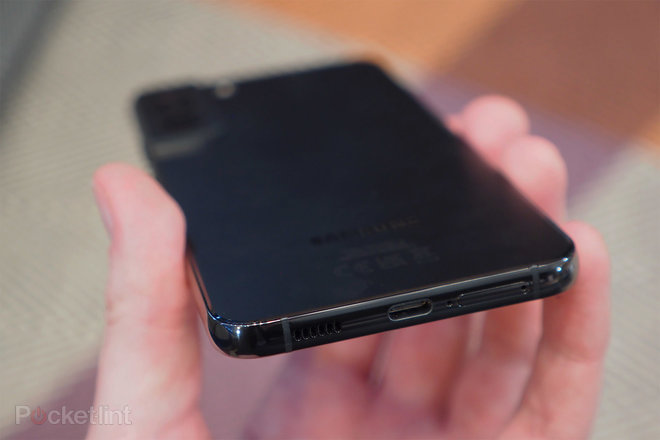 Samsung has deployed its own Exynos 2200 processor in the S22 series in all but the USA and China – these regions get Snapdragon 8 Gen 1, instead. That’s no surprise, as Samsung has been doing this for years. Every year there’s an argument about which is best, of course, and it’s usually true that there are very few practical differences.

The Exynos 2200 in our review sample has been smooth and fast, delivering a flagship experience, but not with any real noticeable difference from the last generation of devices. They might be faster on paper and in benchmarks, but, in practical terms, the experience is very close.

In terms of software, you’ll find Google’s Android 12 operating system with Samsung’s One UI 4.1 interface over it. Samsung is also promising four generations of updates for the software, so you can buy the S22 safe in the knowledge that it’ll serve you for at least its expected term with all the latest security and features through updates. 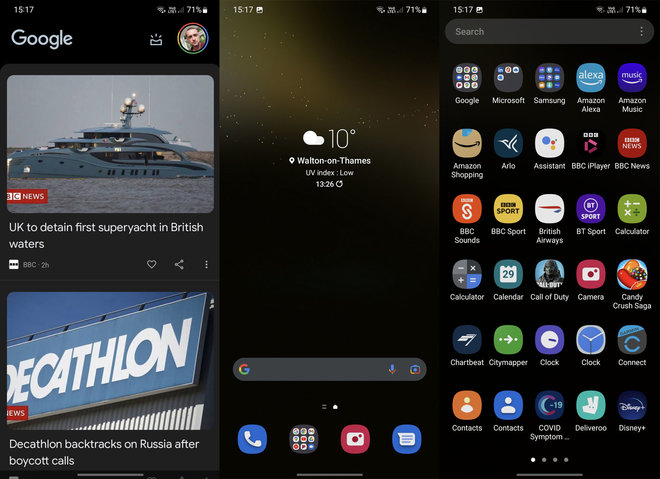 That means the experience here is essentially the same as the other S22 devices, as well as the S21 devices, which have also been updated. Samsung’s software remains one of the largest reworkings of Android and there are loads on offer here, which we’ve covered in an extensive Galaxy S22 tips and tricks.

There is room for improvement: the apps tray that opens vertically and then scrolls horizontally is an affront to logic, and Samsung’s duplication of apps remains, even when there’s no benefit. The Samsung keyboard and browser, too, just seem like a barrier to progress – it’s time to move on Samsung – let’s put all that effort into improving the user experience, perhaps?

The S22+ and S22 have identical cameras, so there’s no difference in this department. It’s a whole different deal compared to the Ultra, however, which has a totally different camera design, more lenses, more resolution and, ultimately, more capability. 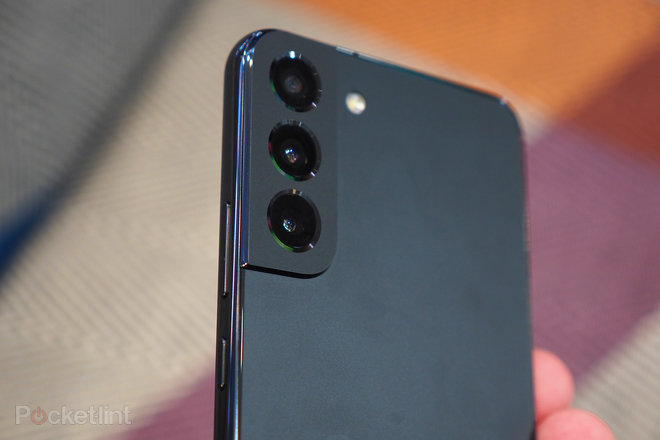 Anyway, as we said of the S22, the Plus asserts its flagship nature in the cameras department by including a proper zoom lens and foregoing any of the throw-away stuff that so many manufacturers seem to be plonking into phones these days – so there are no-nonsense, low-resolution macro or depth sensors to find here.

Instead, Samsung keeps it fairly straightforward by offering a main camera, ultra-wide, and zoom lens. That’s the same arrangement as in the earlier S21+, but with the resolution shifting. The S22+’s use of a 50-megapixel main sensor moves the resolution to the main camera, rather than plonking it in the zoom lens, as was the case with the S21+.

The experience hasn’t changed a huge amount, it’s just that Samsung is now using the main sensor for more – previously it couldn’t shoot 8K, hence why the S21+ had a 64-megapixel zoom sensor. This now means that you can also shoot a 50-megapixel photo in native resolution from the main camera – rather than the default 12-megapixels.

But how does this all really change the S22+’s camera operation? Not dramatically, really. The Samsung Galaxy S22+ still produces great images, there’s some bumping of the saturation to make skies bluer, but, generally speaking, it’s easy to get great looking photos with whichever camera you’re using.

The ultrawide is great, the zoom will offer that 3x optical and holds onto details as you zoom in a little, but, when you arrive at the 30x digital far end of the zoom, it’s pretty mushy, so best avoided where possible. There’s the option to remove unwanted people or objects in photos, but you have to dive through the menus in Samsung’s Gallery app to find this. It works pretty well, so we have no idea why Samsung doesn’t elevate it to make it easier to find.

Samsung talks up night mode on this phone, and it will indeed turn night into day – but that isn’t the party trick it once was, with many offering similar performance at this level. The front camera is decent – and we like the wider-angle option it offers – but it can be a little noisy in shadows.

The big appeal for us is how straightforward everything is. Pick up the S22+, quickly load the camera app, point, pinch, tap, just shoot how you want. There’s optical stabilisation in the right places, decent autofocus, and a night mode that’ll automatically kick in as needed without you needing to think. It’s just more cohesive than many out there – although the likes of Google’s Pixel 6 Pro will more than put Samsung to task.