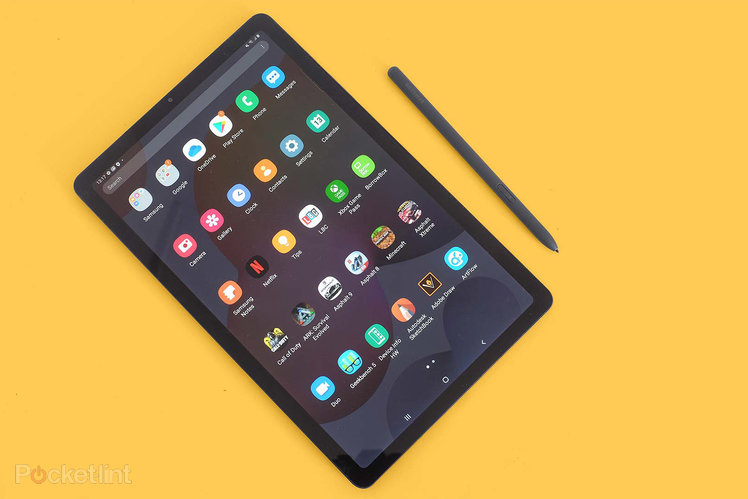 Until recently there were very few good affordable non-iPad tablets. Now there’s a bunch. So there’s a good chance you’re reading this wondering if you should buy a Samsung Galaxy Tab S6 Lite, or the company’s Tab S5e, or the Tab A 10.1. Or, y’know, go the other way entirely and get an Apple iPad.

There’s a good chance a Samsung Galaxy S6 Lite is the right choice. It can do almost everything the full-fat Tab S6 can, because it comes with a clever S-Pen stylus for sketching. This makes the Lite the most versatile tablet you can get at this kind of price point. Great as the Tab S5e is, it does not have a stylus included. And to get an iPad with a stylus you have to spend more, plus you’ll get a tablet with only half the storage of the Samsung (unless, again, you pay more).

What’s the catch? The Samsung Galaxy Tab S6 Lite has an LCD screen rather than a more contrasty OLED. And the iPad has more games, and more power to play them. But, all in all, much of that won’t matter. Let us explain all…

The “Lite” part of the Samsung Galaxy Tab S6 Lite’s name undersells this tablet. It looks and feels just about as good as any out there. 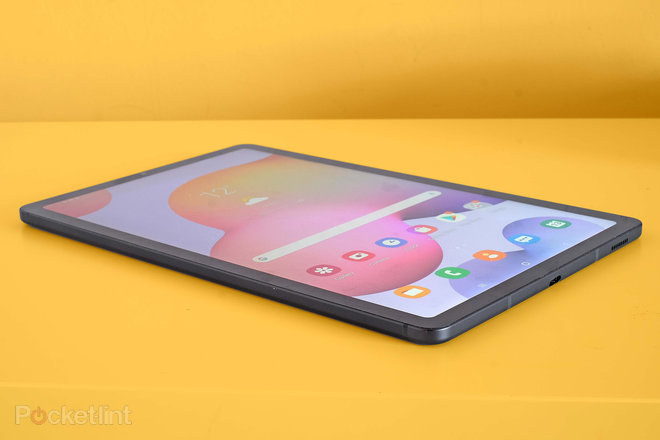 Its back and sides are smooth aluminium, without the chunk of plastic seen in the cheaper Galaxy Tab A 10.1. The Lite’s display surrounds are much smaller than those of a 10.2-inch iPad. And, at 7mm thick, the Lite is thin (and, funnily enough, quite light too). Sure, the Galaxy Tab S6 is thinner still (at 5.7mm), but why would you be shopping for a Lite if you have already been spoilt by its older brother?

Like virtually every higher-quality tablet, the Galaxy S6 Lite is still largely a boring-looking slab-ette of glass and aluminium. There are a few nice touches, though. The corners of the display border are curved. It gives the front a soft, friendly look. And the border thickness is near-identical on all four sides.

The Samsung Galaxy Tab S6 Lite has good speakers too. These are stamped with the Samsung-owned AKG brand, and there are two drivers. They sit on the top and bottom – well, they do with tablet held portrait – designed to give you a stereo sound field when you sit down to watch a movie. 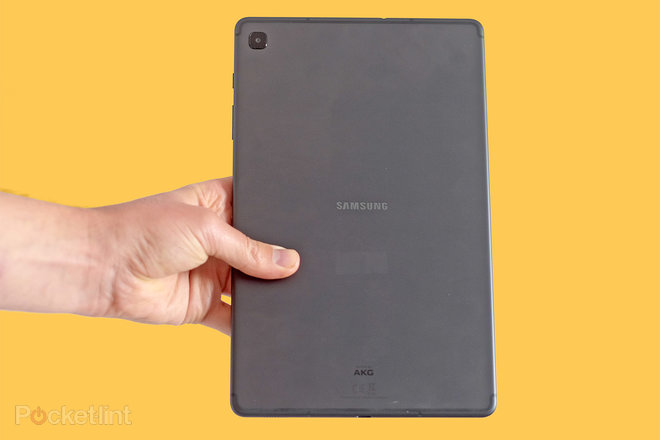 These speakers may not be quite as good as the quad array of an iPad Pro, but they are better than those of the standard iPad. They are beefy enough to give the engine roars of Asphalt 9 enough power, and make watching a movie when in the bath a real pleasure (buy a bath plank if you want to do that, though, as the Samsung Galaxy Tab S6 Lite is not water resistant).

There’s no fingerprint scanner either, but the Lite does support face recognition for password-free secure unlocking.

The Samsung Galaxy Tab S6 Lite seems a lot like the older Tab S5e until you look at the included S-Pen. For starters, Samsung’s last mid-range tablet did not include one. 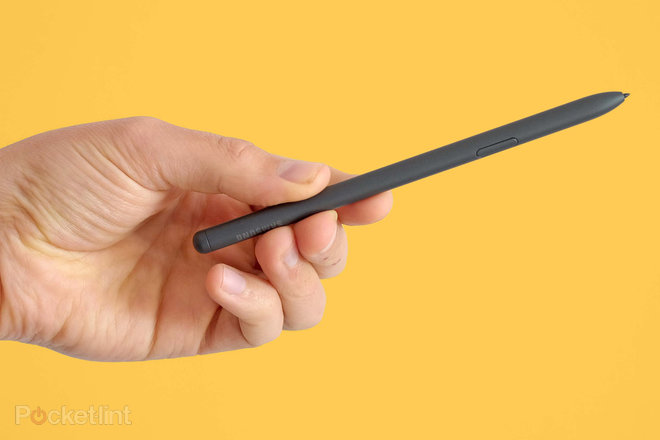 This is a classic-style graphics tablet stylus, one that can only interact with the tablet when the tip is a centimetre or so from the screen. At this range you can press the button on the barrel to take notes, doodle on the screen or capture parts of the display as an image.

You can use the Tab S6 Lite’s S-Pen to navigate the interface, to handwrite instead of type, but the main draw is, well, drawing. The tablet does not come with any pre-installed art apps, but it doesn’t need them when excellent apps like Infinite Painter and ArtFlow are there on Google Play Store.

The drawing experience in these is excellent. Samsung’s new S-Pen stylus feels natural – press harder and the line drawn by your virtual pencil or brush becomes thicker or darker – there’s palm rejection support so you can rest your palm on the screen, as you might on the sketchpad, and pressure sensitivity is just as advanced as the pricier Tab S6’s stylus. 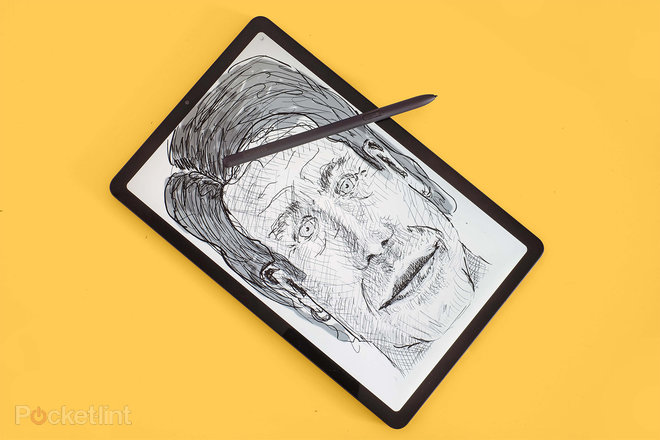 Writing and drawing are also better than with the original Tab S6’s S-Pen. Samsung claims latency has been reduced (this is also affected by processor power) but the shape is also superior. You can see the nib more easily as you draw, and the shape and texture of the barrel are great.

There’s no slot in the Samsung Galaxy Tab S6 Lite to store the pen, though, but it does cling onto the side of the tablet with the help of a magnet. Samsung also sells a Book Cover case, which has a slot in its spine for the S-Pen. This case can also prop up the screen, in classic folio style.

How does the new S-Pen compare with the best of the Apple Pencil? Move the S-Pen back and forth quickly over the screen and you’ll see a slight lag as the drawn line catches up. But even Apple has only eliminated this in the iPad Pro, and it is slight enough not to impact the feel of drawing in almost all cases. 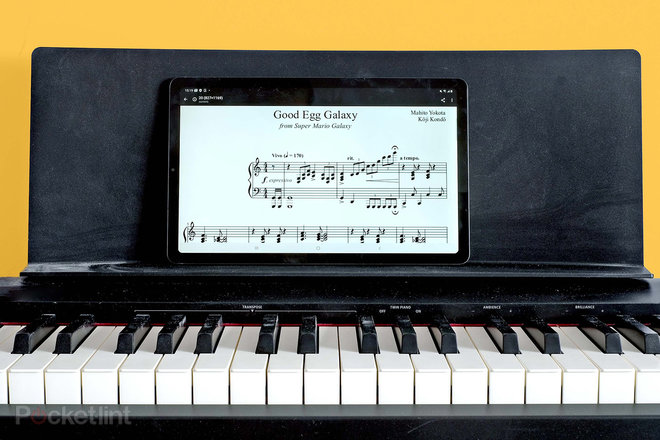 The Samsung Galaxy Tab S6 Lite is one of the best somewhat-affordable tablets for getting creative. An iPad is still far better for music, though. Garageband is included with iPads (which isn’t available on Android anyway; there are Android alternatives, like FL Studio Mobile, but nothing on Google Play has quite the same mix of ease of use).

“Samsung’s more affordable tablet gains an S-Pen” is the big story of the Tab S6 Lite. But we lose the Galaxy Tab S5e’s OLED screen as a result.

This is a 10.4-inch 2000 x 1200 LCD panel, one that’s less sharp and contrasty than the last middle-pick Samsung tablet. The lower resolution is fairly clear from the outset, and it makes text appear softer than on a higher-end tablet. Not that it looks bad, you’d need to have the two side by side really. 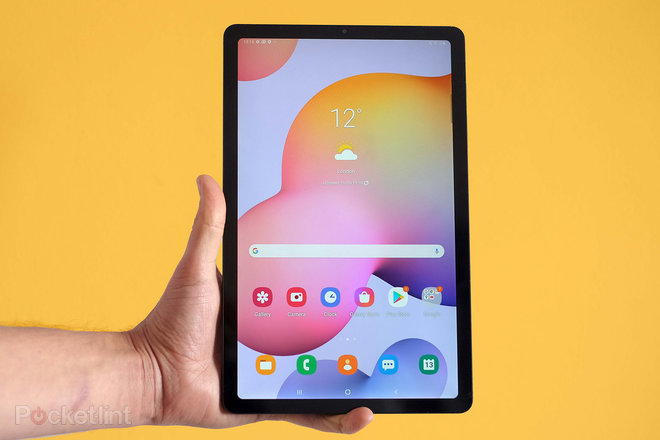 The Lite does have one important benefit over the iPad 10.2. Samsung uses a laminated screen, where layers of the screen are fused together. It makes the screen image appear closer to the surface, so more vital looking.

Colour saturation is good too. And while we missed the perfect blacks of Samsung’s traditional OLED tablets when watching a movie at maximum brightness, films and games still look excellent on this screen.

The Tab S6 Lite is already certified for Netflix HD streaming too, although it does not support HDR (high dynamic range). Try to stream an HDR YouTube video and you’ll only see the standard dynamic range (SDR) version.

There are also limited display controls. You can’t alter the vibrancy of the display colour, most likely because this isn’t a wide colour gamut screen like the non-Lite Galaxy Tab S6.

A lack of colour controls is a pretty minor difference between this tablet and the more expensive option. DeX is a more major one. Because the Galaxy Tab S6 Lite doesn’t have it.

DeX is part of Samsung’s software that makes Android look and feel more like a laptop interface. It’s important if you want to use a Samsung tablet as a laptop replacer. And the Samsung Galaxy Tab S6 Lite is not really designed for this job. Not only is DeX missing, there’s no official keyboard accessory either. 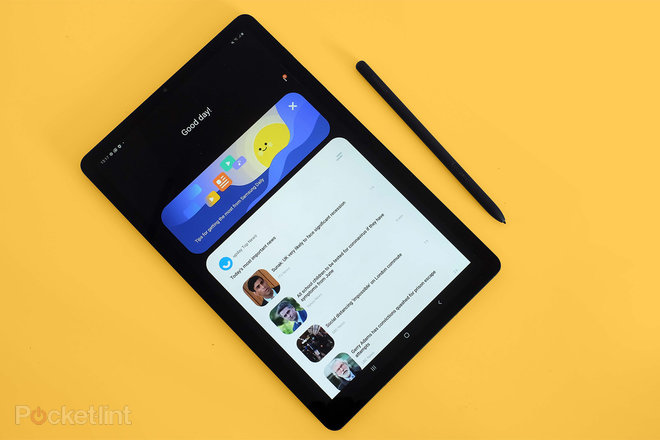 It frankly wouldn’t make sense for Samsung to tweak the full-fat Galaxy Tab S6 keyboard for this tablet anyway, given the asking price is about half that of the Lite’s overall list price anyway.

The message is the Samsung Galaxy Tab S6 Lite is a tablet, not a laptop. But if you’re desperate you will find Bluetooth keyboard cases for it online.

DeX aside, the software looks and feels just as it does on other Samsung tablets and phones. You have your homescreens and a paginated app drawer, plus Samsung Daily – the last a bonus home screen that offers a news feed and “cards” of other info from services like TikTok and Spotify.

Google’s Android 10 is the software under the Samsung user interface layer, which runs perfectly well. There are far fewer laggy moments than in the Samsung Galaxy Tab A 10.1 and, curiously enough, at times it even seems to run better than the Galaxy A51 (a Samsung phone uses the same CPU). 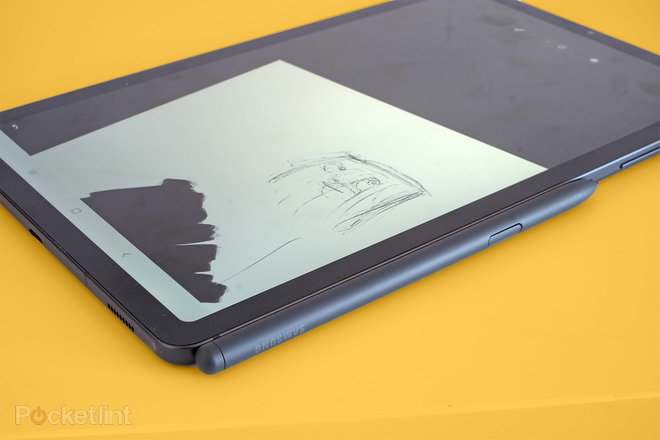 We’re talking about the Exynos 9611, a Samsung chip roughly comparable with one of the more popular mid-range Qualcomm processors. This is paired with 4GB RAM and 64GB storage. That may not seem all that generous when lots of phones have 128GB space, but it’s far less likely to get clogged up with photos in a tablet.

Samsung has a history of scraping by with the just enough power, which becomes obvious when you try to play one of Android’s top-end games. Sure enough, the Samsung Galaxy Tab S6 Lite’s graphics chipset is not as punchy as the iPad 10.2’s A10 Fusion CPU/GPU.

However, we’re mostly very happy with its real-wold performance. We played through the first two tournaments in Gameloft’s Asphalt 9, and only saw a few obvious hiccups. Every now and there’s there is a split-second slow-down as the on-screen action suddenly heats up. And the rain effect in one of the Scottish tracks caused more prolonged frame-rate drops. 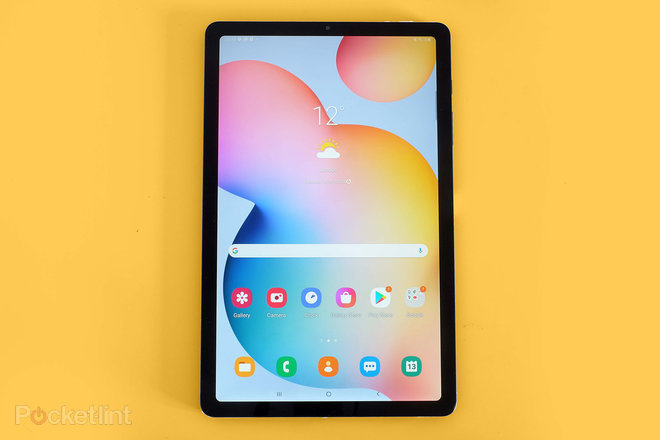 Ark: Survival Evolved does not run well at “Epic” graphics level either, a setting you can comfortably use in the top-end Galaxy Tab S6. However, stick to “Medium” and it runs well enough.

How about PUBG and Call of Duty: Mobile? Both run very well. A mid-range processor is enough for satisfying results at least.

Battery life is excellent too. The Samsung Galaxy Tab S6 Lite has a large battery capacity – just like the non-Lite Tab S6. 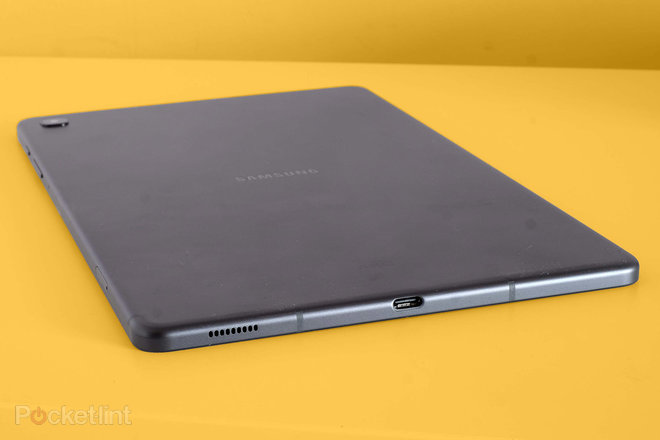 Playing Aspahlt 9 for 35 minutes took just eight per cent off the battery meter, suggesting it’ll last for up to around seven hours of pretty punishing gaming. Three hours of YouTube video streaming took a further 30 per cent off, so a full charge should last a little under 11 hours.

Samsung says the battery should last 13 hours, which seems perfectly plausible if you play a video stored on the tablet itself, rather than streaming, and lower the brightness a bit. Still, that’s probably not how most will actually play video onthis tablet.

The Samsung Galaxy Tab S6 Lite has two cameras. One on the front, another on the back.

Its rear camera has an 8-megapixel sensor and f/1.9 aperture lens. Samsung used the same sensor in the ultra-wide camera of the Galaxy A90 5G.

If this were the main camera of a phone, we’d call it terrible. But in an affordable tablet it’s… well, it’s still only just acceptable. 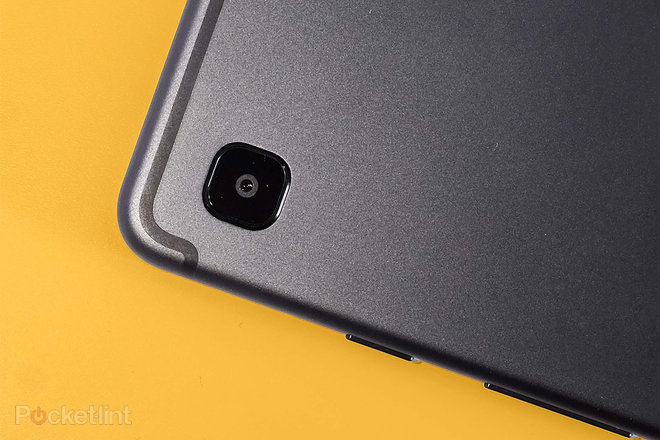 The Tab S6 Lite can take pleasant enough shots in daylight when there’s not too much light variance in the scene. Try to shoot an image with a bright clouded sky and darker foreground and the tablet falls over. While the clouds may look well exposed, the foreground is left a near-silhouette.

Whatever dynamic range enhancements the tablet’s processing uses are not enough. This may improve with software updates, but don’t expect miracles.

Want to shoot video? There’s no 4K mode, just 1080p and 720p. And image stabilisation is not particularly effective. As ever, if you have a half decent phone it will almost certainly do a better job for photos and video than a tablet.

The front camera is perhaps more important. It has a lower-end 5-megapixel sensor. Again, your phone selfie camera may well be a lot better, but the Samsung Galaxy Tab S6 Lite will beat an awful lot of laptop webcams for video chat.

Samsung clearly didn’t put too much fo the Tab S6 Lite’s budget into the cameras, as the hardware is the same as the cheaper Galaxy Tab A 10.1’s. The Samsung Galaxy Tab S5e has better cameras, which may be worth consideration if you do not care about the S-Pen stylus.