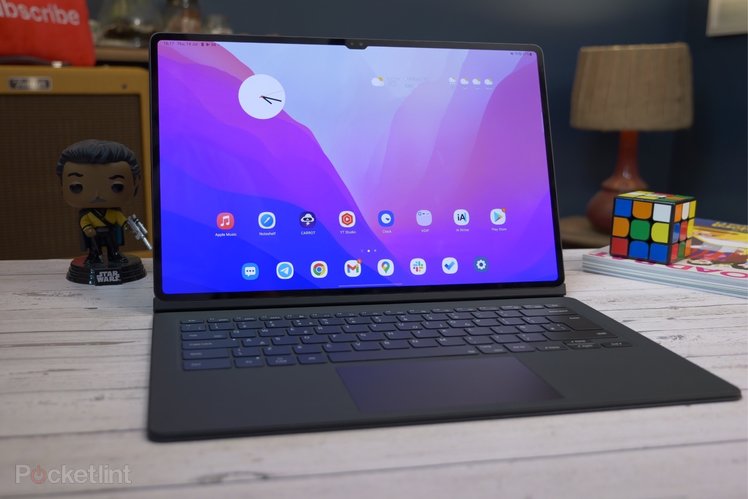 Not content to plod along with just offering larger-sized tablets like the standard Galaxy Tab S8, this model ups the ante with a 14.6-inch display.

It’s a bold move, and one that means Samsung now delivers, on paper, one of the biggest and baddest Android tablets on the market.

With its gigantic platform, is it capable of delivering a solution to a problem so far unanswered by the industry leader Apple?

We’ve put the Tab S8 Ultra through its paces in order to find out.

For most tablet-makers, the primary design aim is to deliver a device that you can hold in one hand and tap on the display with a free finger from the other. Unless you’re watching videos, of course, in which case you hold it two-handed or rest it against something.

The Tab S8 Ultra, however, isn’t really designed to be an easy device to hold with one hand. The large, 14.6-inch long aspect ratio display forces it into being a size that’s actually quite cumbersome to hold. Hold it vertically and it just feels far too tall. Hold it one-handed in landscape, meanwhile, and it feels unwieldy and unbalanced. 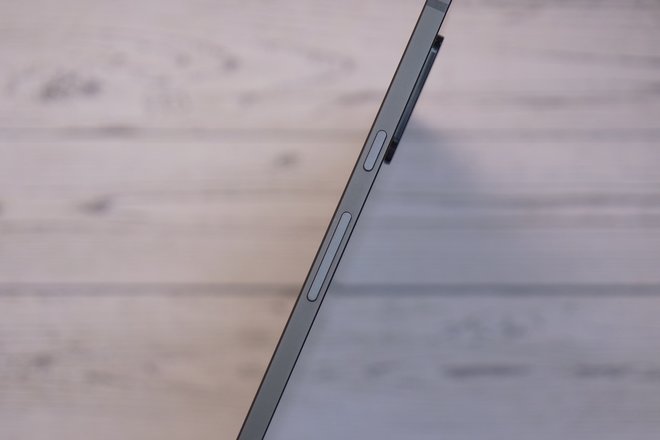 By any comparison, it’s big. With its near-15-inch display demanding space, the tablet is nearly 5cm longer than the 12.9-inch iPad Pro – and only 6mm narrower. This almost necessitates the optional keyboard cover and S-pen stylus, but, on the other hand, makes it a fantastic media device for watching your favourite hit TV shows (more on this later).

However, there are two other models for those who want a more standard tablet size: the Tab S8+ has a 12.4-inch display, and the Tab S8 we mentioned up top features an 11-inch screen. For those not wanting a big, laptop-sized device, these two tablets would be better choices.

As we say, the size and shape of the Ultra mean it’s encroaching more into 2-in-1 laptop territory than traditional, casual tablet use. So it makes absolute sense that Samsung also offers a snap-on magnetic keyboard cover/folio. With this attached, you get a full-sized keyboard, a trackpad and a little silo covering the S-pen while it’s magnetically attached to the back of the tablet.

This particular element is actually quite smart from Samsung. The strip of glass that extends out of the camera unit along the rear of the tablet also acts as a window for wireless charging and hides a magnet. With it, you can keep your S-pen attached to the back while also simultaneously charging it. 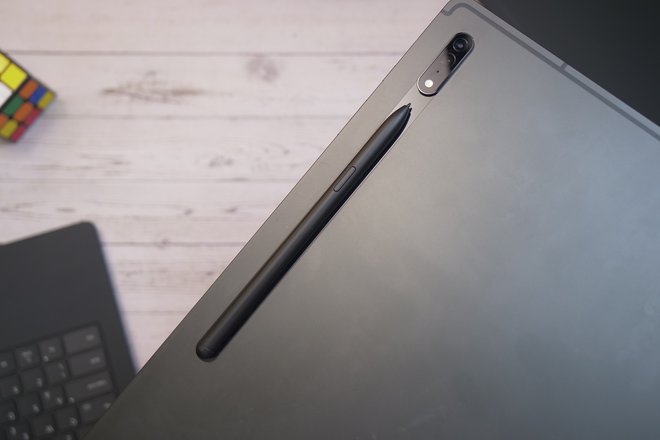 That’s not the only element of the design we were impressed with.

Despite being a very tall and quite heavy device, it’s ridiculously slim. At just 5.5mm, it’s one of the thinnest tablets on the market, and it feels sturdy, too, thanks to having a casing and frame made from aluminium. The display’s bezels are impressively narrow, also, giving you a screen-to-body ratio of 90 per cent.

As mentioned, the experience of using it as a tablet is very different to using it with the keyboard cover attached. In the latter mode, you can almost convince yourself you’re using a laptop. It commands that much space on your desk, and features a proper keyboard with big keys spread over about the same amount of space as you’d find with a 15-inch laptop. 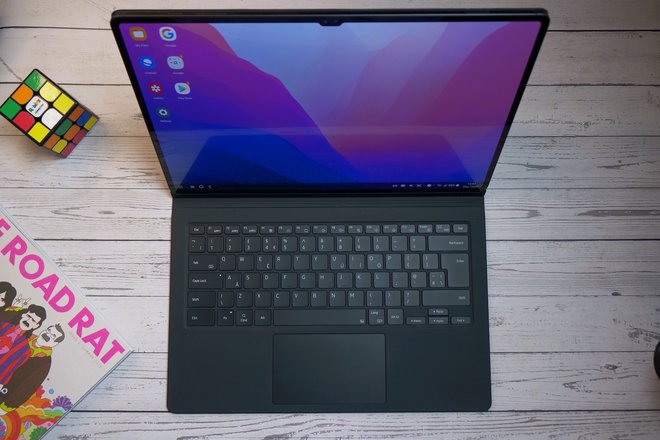 What’s more, with it running Samsung’s UI skin on top of Android 12, there are plenty of tricks to help make the most of the big screen. A key in that bag of tricks is DeX, Samsung’s user interface – originally designed for phones connected to external displays, which is essentially the same as using a regular computer.

This is where the big screen and big size start to become less of an inconvenience and more beneficial. It means you can genuinely get work done on this machine, whether that’s boring office-based online work or creativity. Apps like LumaFusion mean you can even edit video on the go, and the big screen combined with the stylus means it’s actually a very good experience.

The S Pen gives you that extra precision you need to edit video timelines.

Similarly, when you detach the keyboard from its cover case and fold the kickstand all the way back, you can use the tablet as an easel and canvas of sorts. You can sketch, doodle and create your next digital masterpiece. 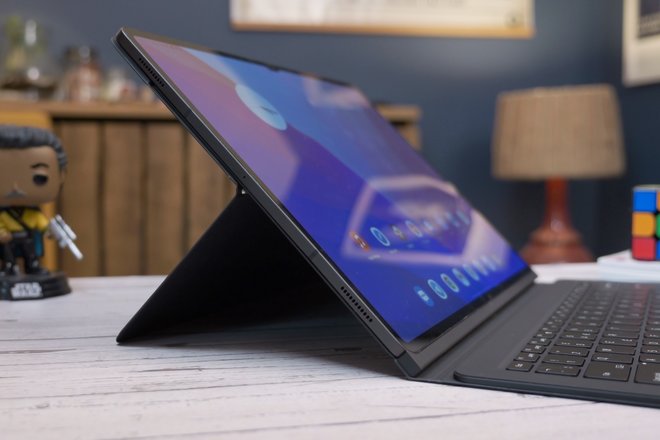 The only real downside of Samsung’s keyboard cover is that it’s not at all suitable for sitting on your lap. It’s far too unbalanced, and the kickstand itself is too thin to hold it up properly without wobbling. You definitely need to have it resting on a solid surface, like a desk or table, in order for the experience to be comfortable.

Other practical additions for everyday work include the in-display fingerprint sensor, which works relatively reliably but wasn’t needed all that often since we’d already set up the facial recognition. Instead, this uses optical sensors built into a tiny notch at the top of the display. Unlocking the table is much quicker and takes far less conscious effort.

Like the creative elements, another area the Tab S8 Ultra very much excels is in the media consumption department. Thanks to that big, bright display and the four speakers on the edges, you get a very immersive and expansive experience. 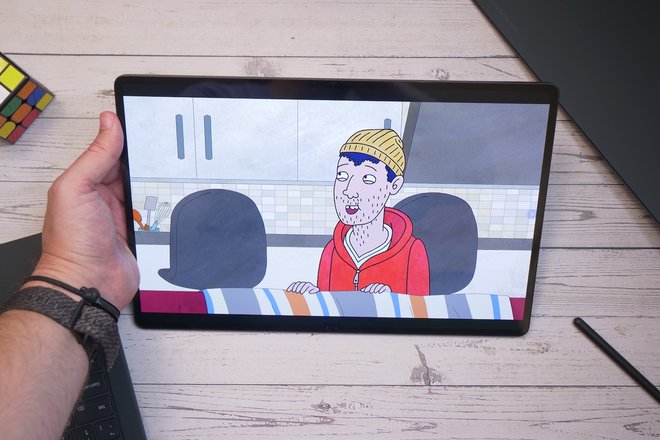 The resolution is a little unusual, being a 16:10 ratio display, but it’s on the right side of the QuadHD arrangement. Specifically, it’s an 1848 x 2960 panel, giving it a pixel density of around 240 pixels per inch. Not as sharp as some smartphones, then, but it’s around about what you’d expect on a tablet – especially one as big as this. For reference, the 12.9-inch iPad Pro is around 265 pixels per inch.

As a display, however, it’s fantastic. It’s big, it’s bright and the 120Hz refresh rates give the entire interface that gliding, smooth and sharp appearance as you navigate around the various layers of the software. And – as much as it makes the device cumbersome – its size and ratio make it really well suited to media consumption.

Load up a TV show or a movie and it’ll fill nearly all available space on the panel without any heavy letterboxing. Of course, you still get a little when you watch 18:9 or cinematic ratio movies and shows, but nowhere near as much as you’d get on a 4:3 display like the iPad. 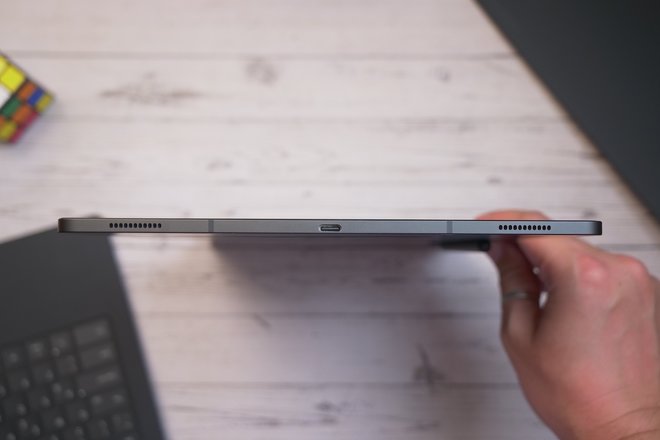 The fact it also benefits from HDR10+ support, and the high-contrast, bright Super AMOLED display also means you get punchy visuals. Lots of colours, lots of contrast and plenty of life.

This is only further enhanced by the aforementioned speakers built into the edges. There are four of them in total. They’re loud and feature well-balanced audio to help elevate media consumption. With that and the display combined, it’s become one of our favourite devices to sit in bed and watch Netflix and Disney Plus before bed.

In pretty much any measurable way, the Tab S8 Ultra is a speed fiend. The flagship Snapdragon 8 Gen 1 inside ensures that any apps or interfaces load quickly and effortlessly, whether it’s side-by-side split-screen multitasking or playing demanding games titles.

But there’s more to it than that. Even from a connectivity standpoint, it has everything you need to get the fastest experience now, and in the future. There’s a 5G model with a SIM tray to ensure you can stay connected to the fastest cellular networks available, plus it has support for Wi-Fi 6E. This is the latest generation of Wi-Fi, which enables lower latency and faster speeds than earlier iterations of Wi-Fi 6. 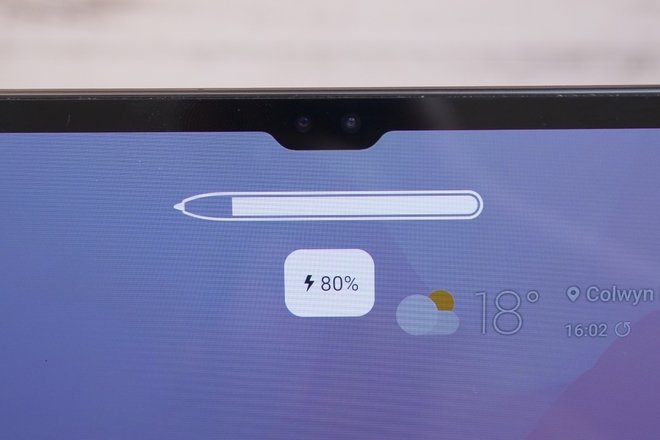 If, for instance, you have a Gigabit fibre connection at home or work, Wi-Fi 6E wireless routers ensure that you’ll get the best possible speeds and performance with the S8 Ultra. And if you don’t, you can rest easy knowing you’re future-proofed for when those arrive for you.

Battery life is similarly strong, comfortably lasting hours between charges. Of course, mileage varies a lot depending on what exactly you’re doing with it, but if most of its time is spent being a productivity machine and getting work done, it’s certainly more than capable of lasting a full work day. And, with 45W charging speeds, it can refill speedily enough, too.