When Samsung launched its foldable display smartphone back in 2019, it achieved the unthinkable by making glass bend without breaking. Tech enthusiasts would argue that the company used Infinity Flex display, which essentially uses Samsung’ Ultra Thin Glass technology to make the display fold and unfold, but in the eyes of the common users, it had made glass (something completely breakable), well, fold. Sure the first-gen Galaxy Fold did face a lot of hiccups, both in terms of technical challenges and buyers’ apprehension. However, over the years, Samsung has managed to create more and more trust on the foldable form factor and turn its foldable smartphones, which at the moment includes the Galaxy Z Flip and Galaxy Z Fold series, into more of a mainstream device. In this series, the company recently launched two new foldable smartphones — the Samsung Galaxy Z Fold4 and the Samsung Galaxy Z Flip4.

It has everything that a conventional smartphone offers, a big display, multi-camera setup, a decently long battery life and a core that can take the heat, and some more, like the new flex mode that let’s you turn half of the display into a large trackpad while using certain apps when folded or a more utilitarian secondary display.

Despite these additions, not a lot has changed in the Galaxy Z Flip4 smartphone. We will talk about all of that and more in the review below. So keep reading…

Design is one of the strongholds of the Galaxy Z Flip4 smartphone. The thing that I like about this phone the most is its compact form factor. You can easily fold the phone in half and store it in the back pocket of your pants or a tiny hide-away pocket in your bag without worrying about the phone occupying a lot of space or weighing down your attire. One of my biggest woes with the present day flagship devices is their big and bulky design that requires a noticeably large space to store. But the Galaxy Z Flip4 fixes that issue by morphing itself into a small box that fits in the palm of my hand. It’s also a lot lighter than some of its other Galaxy siblings. While the Galaxy Z Flip4 weighs 187 grams, the Galaxy Z Fold4 weighs 263 grams and the Galaxy S22+ weighs 195 grams. Sure it is not the lightest flagship around, but it does lean towards the lighter side of things. 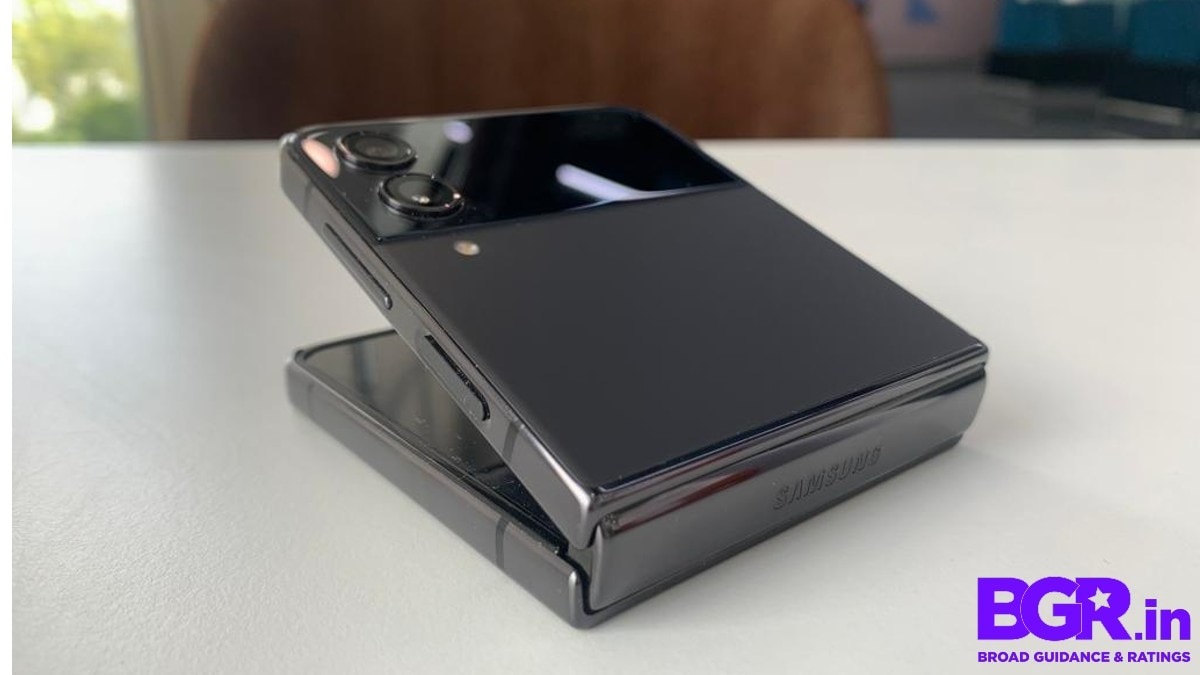 The overall impact of the aluminum case, Corning Gorilla Glass Victus protection, IPX8 rating and the ultra thin glass on the inside is that the Galaxy Z Flip 4 feels very durable and sturdy and not something that would easily break.

Now, let’s talk about the display. The Samsung Galaxy Z Flip 4 has a 7.6-inch 120Hz display on the inside with an aspect ratio of 22:9, which makes the phone slightly longer and narrower than the conventional smartphones. While it does take some time to get used to this longer display, viewing content on the screen looks like a breeze once you get a hang of it. Whether you are using the phone in the softer indoor lighting conditions or the harsh daylight sun, the phone manages to deliver bright colours and crisp details every time.

Then there is the matter of the crease. The Galaxy Z Flip4 does have a visible crease in the middle of the display. While Samsung has flattened it out a little compared to the third-generation model, it is still there and it is still visible. But it doesn’t exactly hinder the overall experience at all. 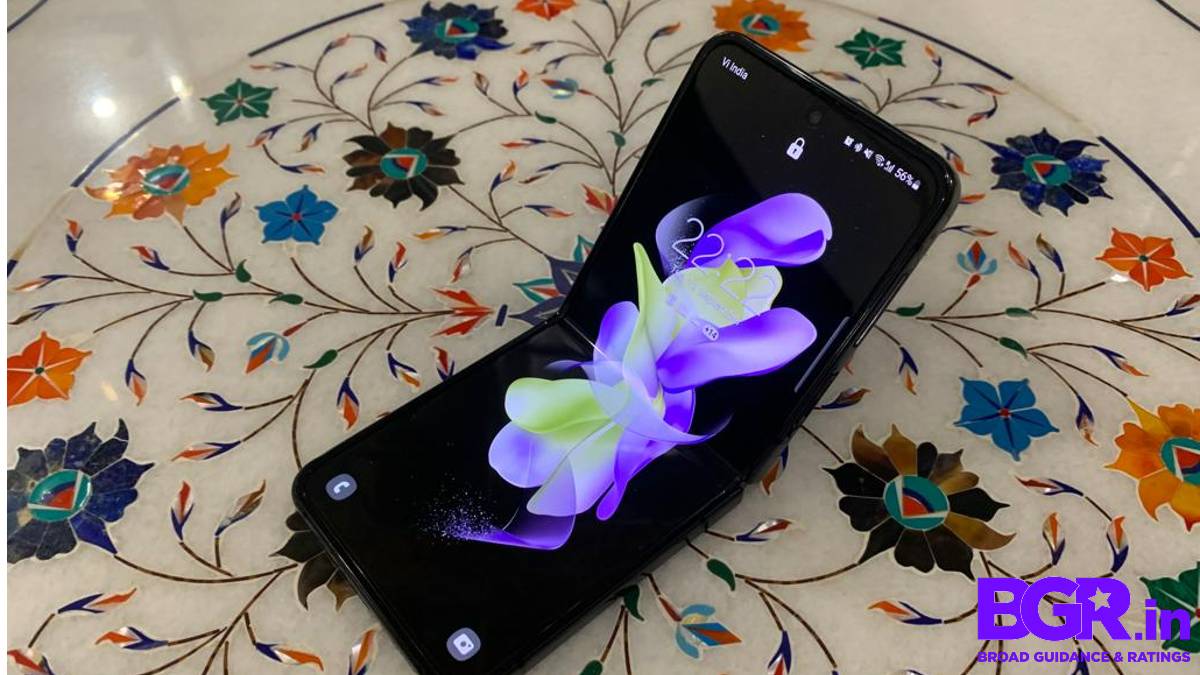 Beside a bigger display, you also get a smaller 1.9-inch display on the outside, which is limited in its capacity. In addition to clicking selfies from the rear camera, you can also control music, check weather, control alarm click, and use a timer. This year, the company has added additional controls giving the secondary display more functionality compared to the Galaxy Z Flip3. You can now send quick responses to text message, dictate a message, control the connected smart home devices, check your event calendar and notifications, check your steps count and call any one of your three pre-decided contacts from the secondary display. For anything other than that you will have to go to the main display.

When it comes to to cover display, I feel that Samsung is a step shy from unlocking its capabilities. In an ideal world, the cover screen should let users see notifications from all other apps that they are using, even reply to some of them in a word or two. But we are not living in an ideal world. And so, we will have to wait for another update (or may be another iteration?) to see the cover display be more functional.

Now, let’s talk about the cameras.

Samsung has not made major changes to the camera setup of the Galaxy Z Flip 4 smartphone. It comes with a dual camera setup consisting of a 12MP primary camera and 12MP ultra-wide angle camera at the back and a 10MP camera on the inside. This camera setup is exactly what you get in its older Galaxy Z Flip3 smartphone. Aside from the new Nightography feature, which the phone borrows from the Galaxy S22 series smartphones that was released earlier this year, Samsung has made little changes to Flip4’s camera. This is particularly disappointing as some of the company’s other flagship devices, say Galaxy S22+, offer a better proposition to photo buffs.

Despite this obvious lack in creativity, Samsung has managed to turn a somewhat disappointing upgrade into a more exciting one, all thanks to the phone’s form factor and the new Flex Mode. 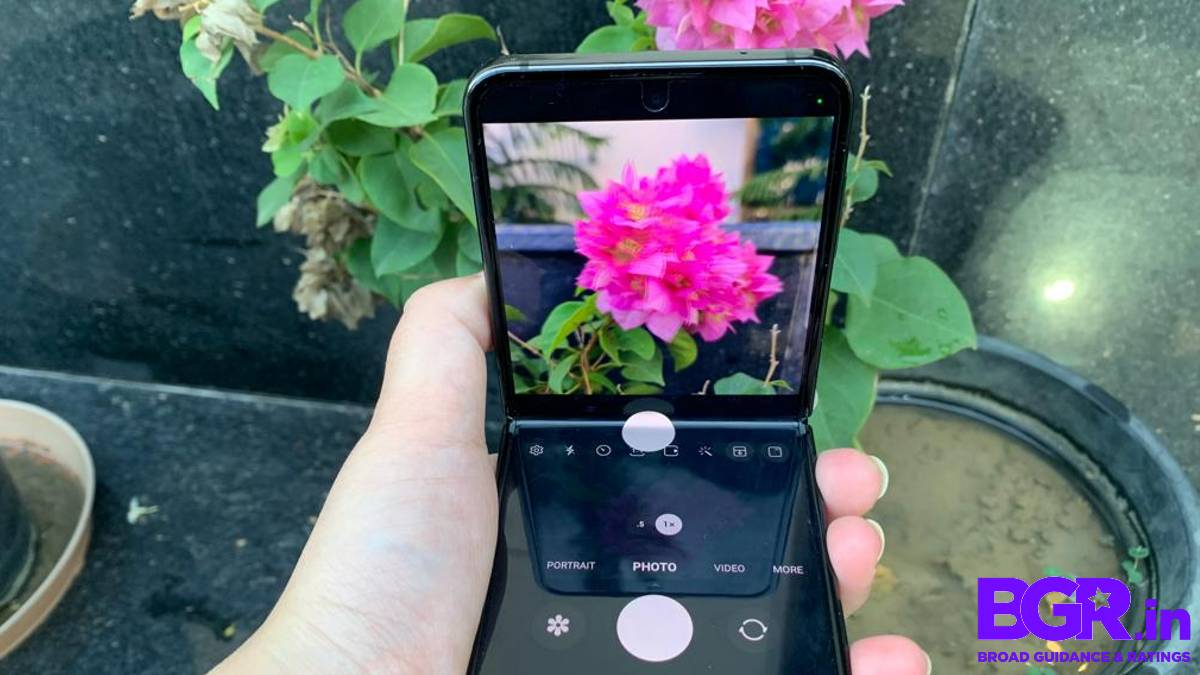 When folded in half (or at a 90-degree angle), there are two ways you can use the camera. One is using the internal camera while using the top half of the display for framing the shot, and the other is using the external cameras and framing the shot using the top half of the display. There is a third way of capturing images and videos as well. It involves using the external cameras and the secondary display as the view finder. The first two methods are ideal for those who use their smartphones for shooting videos, vlogs or otherwise, as the Galaxy Z Flip4’s form factor eliminates the need for using a tripod, which more often than not is a bit more complicated to use, especially when compared to this phone. The third way, on the other hand, can come in handy for if you are someone who shoots a lot of selfies. Though the cover display doesn’t give you much room to wiggle in the frame. While I am not a fan of clicking solo selfies, I do like using the front camera every now and then when a large or even a small group is involved. I also like using the front camera in the flexed mode when I am on a video call with friends and family, which I hate to admit happens a lot. It’s times like these that remind you why the Flip form factor works and why the combination of this form factor with the flex mode is Samsung’s smartest move in the phone’s camera department yet. 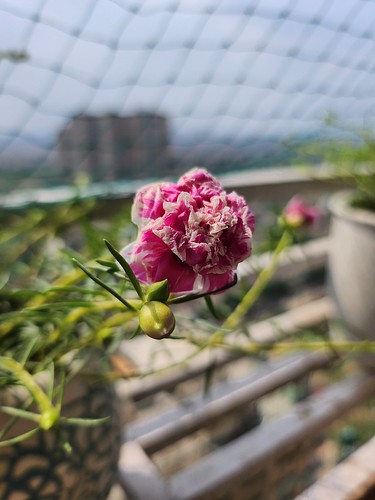 As far as the phone’s camera performance is concerned, it is consistent with Samsung’s flagship smartphones. There is ample depth and clarity in the images clicked using the outer camera but the colour is a bit over saturated, especially in the day light condition. However, there are moments of hits and misses. Meaning, while the camera does saturate the colours a bit more, there are moments when it manages to replicate colours accurately. In low light conditions, the phone produces sharp images ample colour, and clarity. The inner camera too captures fairly clear images in indoor light and low light conditions. Though I wish things were a tad bit better in this regard.

Coming to the performance, like a lot of flagship devices launched this year, the Galaxy Z Flip4 is powered by Qualcomm’s Snapdragon 8 Plus Gen 1 system-on-chip (SoC) that is coupled with 8GB of RAM and 128GB of storage space. While this processor offers minor upgrades over the Snapdragon 8 Gen 1 processor that powers the Galaxy S22 series, it’s track record so far has been stellar. This is true for the Galaxy Z Flip4 as well. The foldable (at this point it feels wrong to call it just a smartphone) offers a fuss free performance no matter what you throw at it. I have been guilty of using the Flip4 as an additional reading screen, watching OTT content and for making the phone sit through countless seemingly never-ending video calls, but not once did it slow down or stutter. However, it did heat up noticeably sometimes while I captured images and edited them thereafter. Other than that, the Galaxy Z Flip4 has been a fun companion.

On the software front, the phone runs Android 12L-based OneUI 4.1 operating system. It is smooth to use and it offers a bloatware free experience (almost). That doesn’t mean that the UI means all business. It does have some apps such as Smart Tutor, Samsung Members and Samsung Free, that I’d rather not have. But Samsung has kept the number of these additional apps on the phone limited. It has also made it easy for you to get rid of them should you get bored of worrying about the aesthetics. Overall, the UI is fairly clean, clutter free and largely customisable.

This is one aspect where Samsung has made significant changes. The Galaxy Z Flip3 came with a 3,300mAh battery, which was abysmal for any smartphone in the present era. In Galaxy Z Flip4, Samsung has bumped up this number to 3,700mAh, which makes the phone last for a day easily without needing a charge. Over the weekends, when my usage goes down significantly, the device worked without needing a charge for a day and a half. 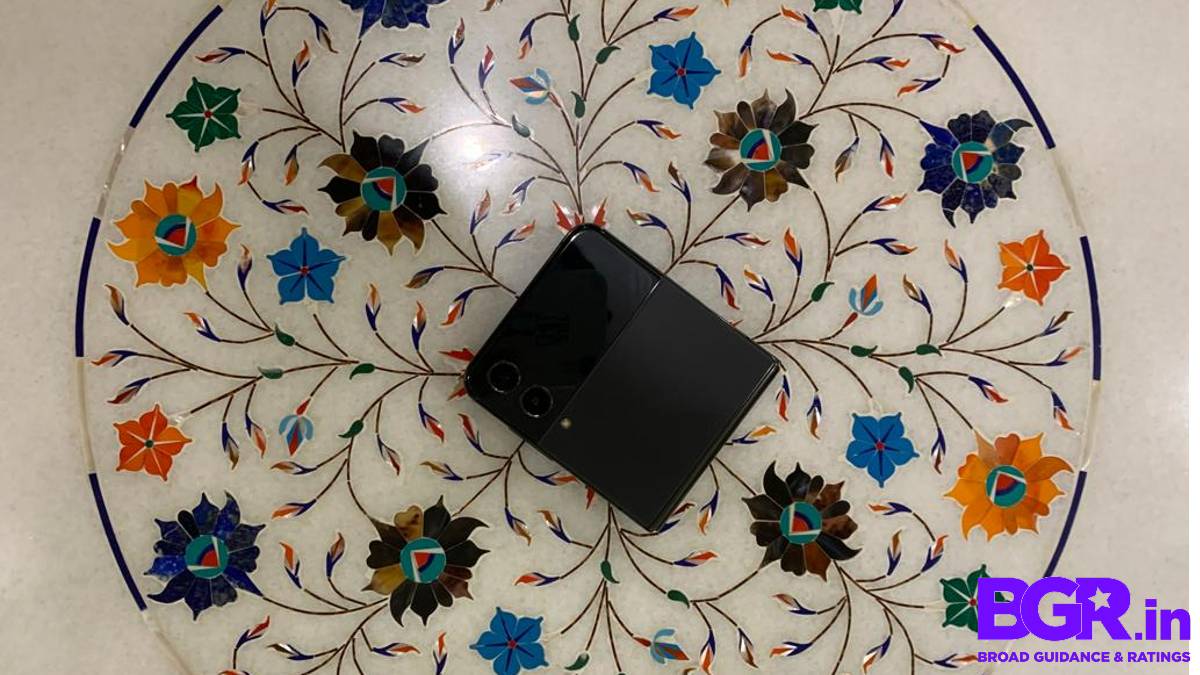 On the charging front, the charging cable included in the box charges the phone in around two to two-and-a-half hours. But plug this cable in a fast charger, the phone goes from zero to 100 percent in around an hour.

Should you buy Samsung Galaxy Z Flip4 or not?

The question isn’t if you should buy the Galaxy Z Flip4 or not, that’s a no-brainer. The real question is if you should buy the Flip form factor or not. And the answer to this is quite simple. Flip (form factor) and by extension the Galaxy Z Flip4 makes the smartphone smarter by offering a simple alternative for all the challenges that you face while using a conventional smartphone. What helps is that the phone is light and compact and it fits just about anywhere. It also helps that in a more flexed state, the two halves of the inner display can be used for viewing content (or as a view finder in case of the camera app) along with using the trackpad or using another app simultaneously. Sure, the Galaxy Z Flip4 has a long way to travel before it becomes the perfect companion. Making the cover display more functional, for one, would be nice. But until that happens, the Galaxy Z Flip4 is the smartphone that you need to buy.