When Samsung released the Galaxy Z Fold 2 last fall, we here at XDA absolutely loved it. It was a huge improvement over the original Fold, and proved that foldables are here to stay. But that’s not to say the device is flawless — we have minor nitpicks with the device that we hope Samsung can fix for the Galaxy Z Fold 3 coming later this year.

In the months since, Huawei has released a similar-looking foldable that has arguably even better hardware — but its China-only status and lack of GMS support means its appeal is very limited. This keeps the Galaxy Z Fold 2 as the best foldable phone for most people, and we can’t wait to see what the Galaxy Z Fold 3 brings along. Here’s our wishlist for the upcoming foldable, based on our extensive experience handling devices in this category since the birth of the category itself.

The point of a foldable is that it offers the user a larger screen experience in a pocketable package. The Galaxy Z Fold 2 mostly delivers, but it’s still slightly thick and heavy at 16.8mm and 282g. This extra thickness and heft isn’t a big deal when I’m going about normal daily activities wearing, um, proper pants, with a button and/or belt. But when I’m at the gym or hooping wearing basketball shorts, which are thinner, looser fitting, with only an elastic waistband, the weight of the Galaxy Z Fold 2 can begin sagging the shorts down on one side. The phone’s heft also tires the wrist after extended one-hand usage.

I would also like to see the Fold 3 fold in a flatter-folding design like Huawei’s Mate X2. This would not only make the Galaxy Z Fold 3 look better, but shave another few millimeters off the overall thickness of the device. 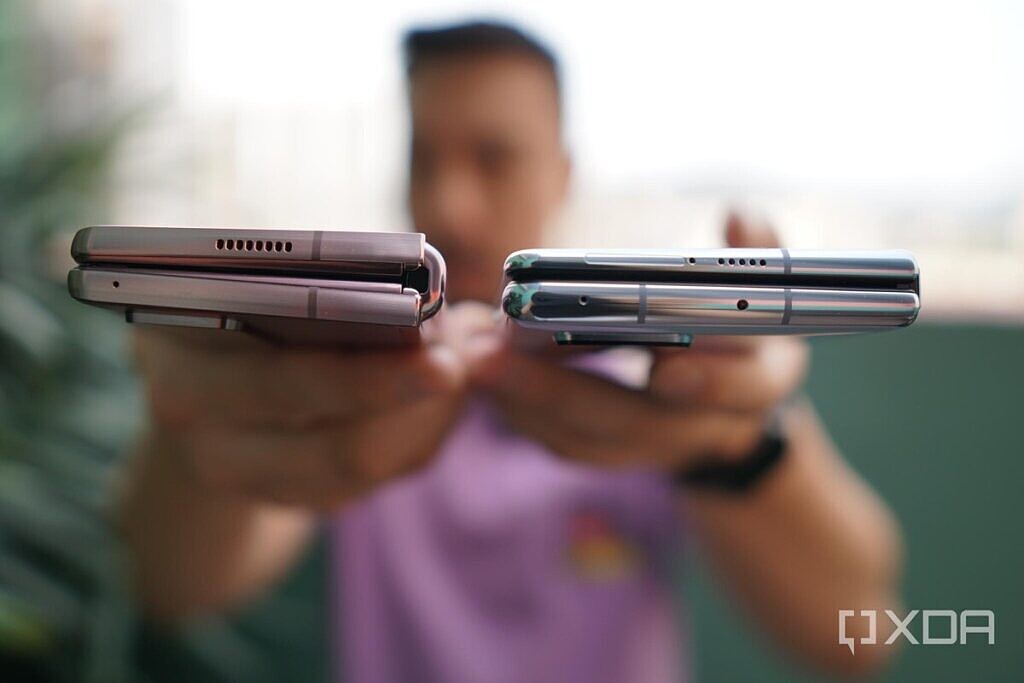 The Galaxy Z Fold 2 (left) has a noticeable gap when folded; the Mate X2 does not.

All of Samsung’s foldable phones up to this point did not use Samsung’s best possible camera systems at the time of release. The Galaxy Z Fold 2, for example, lacks the 108MP sensor and Periscope zoom lens that’s been a headline feature of the past three Galaxy slab flagships. 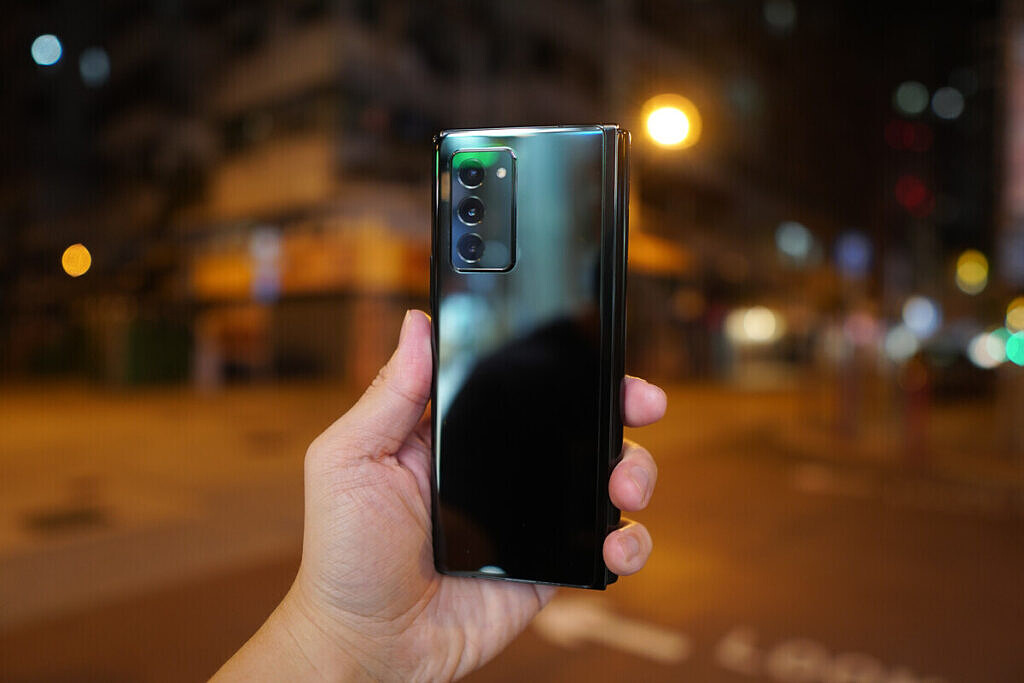 At the time I reviewed the Galaxy Z Fold 2, I forgave the device for using a “lesser” camera system because I figured it was physically impossible to fit a Periscope lens (which is thicker and takes up more space than traditional camera sensors) into a foldable device. But then Huawei threw that assumption out the window by doing just that with the Mate X2. 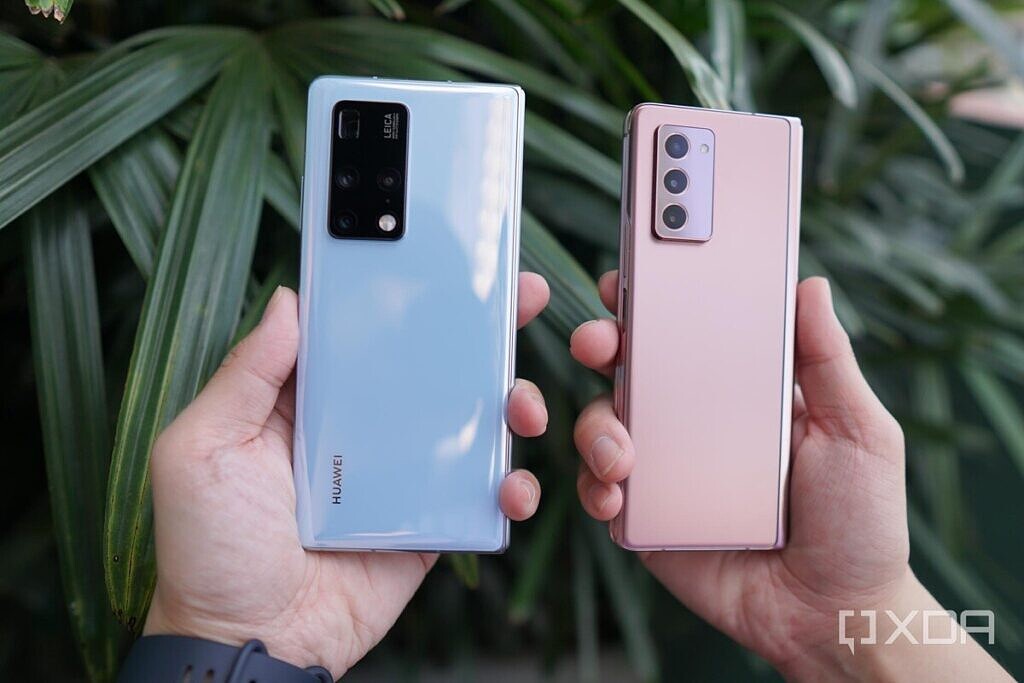 Now there are no excuses for Samsung — please put a Periscope zoom lens into the Galaxy Z Fold 3.

One major improvement Samsung made with the Galaxy Z Fold 2 over the original Fold was that it drastically increased the display area of the outside screen, which Samsung calls “cover display.” Most of that growth happened vertically however, as Samsung really just got rid of the huge forehead and chin bezels of the original Fold and did not increase the phone’s width all that much. That left the Galaxy Z Fold 2’s cover display with an awkward 25:9 aspect ratio, which is really tall and narrow.

Don’t get me wrong — I could still use the phone for most tasks, but if I need to do intensive typing, the keyboard does feel cramped; some apps also don’t display properly in such a tight fit. 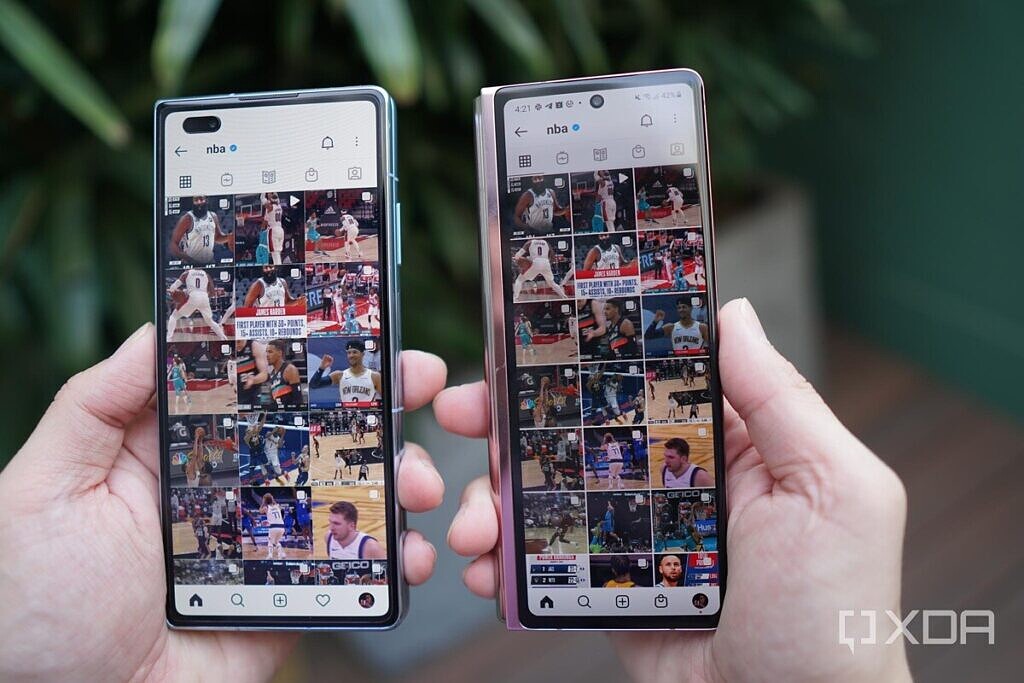 I would like to see the Galaxy Z Fold 3 widen the outside display to come closer to a more conventional aspect ratio. This has already been accomplished by the Huawei Mate X2, which has a 21:9 outside screen that makes the phone feel more like a conventional slab phone when folded.

There were rumors that last year’s Galaxy Z Fold 2 would support Samsung’s S-Pen stylus, but that ended up not being true. But with the Galaxy S21 Ultra gaining S-Pen support, and Lenovo’s foldable PC — the ThinkPad X1 — also supporting a stylus, it appears both the desire and technology are ready for Samsung to untether the S-Pen from the Note series and make it an ecosystem-wide Samsung accessory. 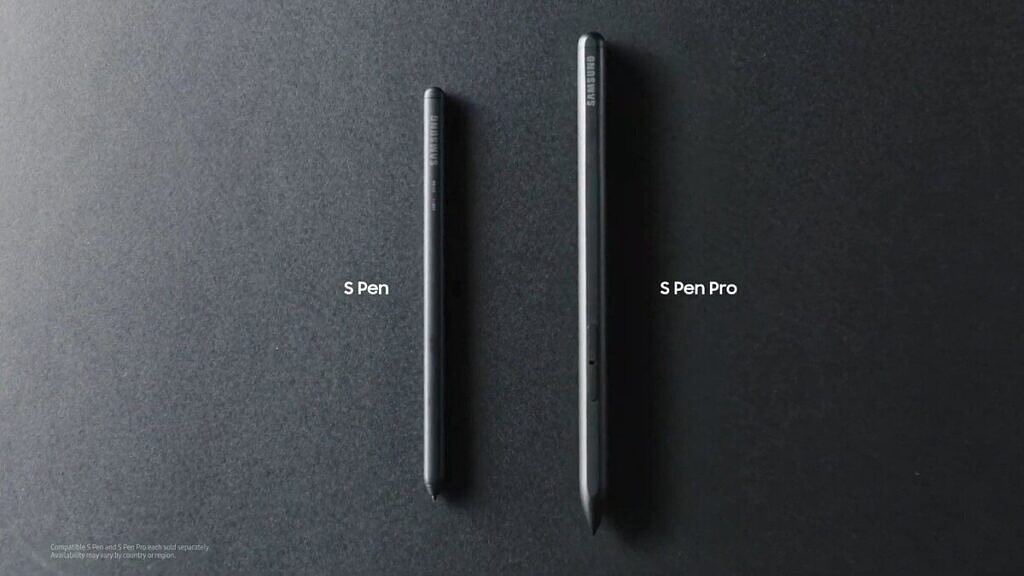 Get Rid of the Crease

Both the original Galaxy Fold and Galaxy Z Fold 2 displays have a rather abrupt and harsh vertical crease down the middle of the screen that, while not too visible by eye if looking at the “right” angle, is always noticeable by touch. The groove is so deep in fact, that it would disrupt a pen stroke for artists who value precision. Therefore, if the Galaxy Z Fold 3 is to support the S-Pen, it must reduce the crease.

The good news is, the technology is already there. Huawei’s Mate X2, Lenovo’s ThinkPad X1, and Motorola’s Razr 5G all have foldable screens that exhibit very little crease due to a folding mechanism that tucks the screen into a gap for a teardrop-like fold. 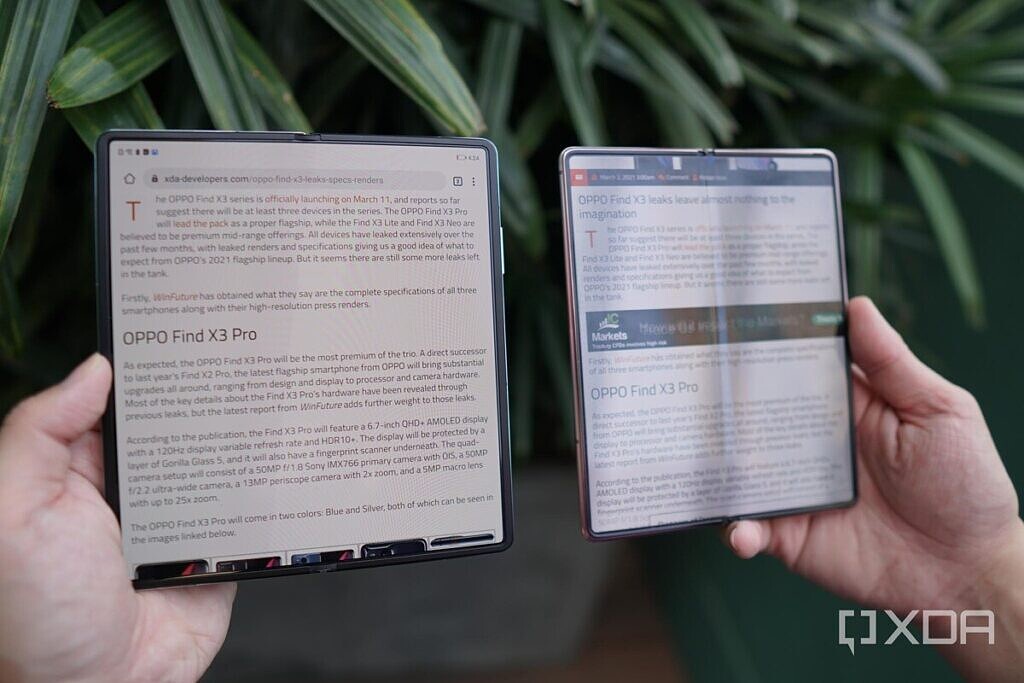 Samsung could consider this option to reduce the crease. However, going this route may make the hinge no longer able to stay open at any angle — a useful trick of the Galaxy Z Fold 2. Maybe the engineers can figure out a good middle ground somewhere. 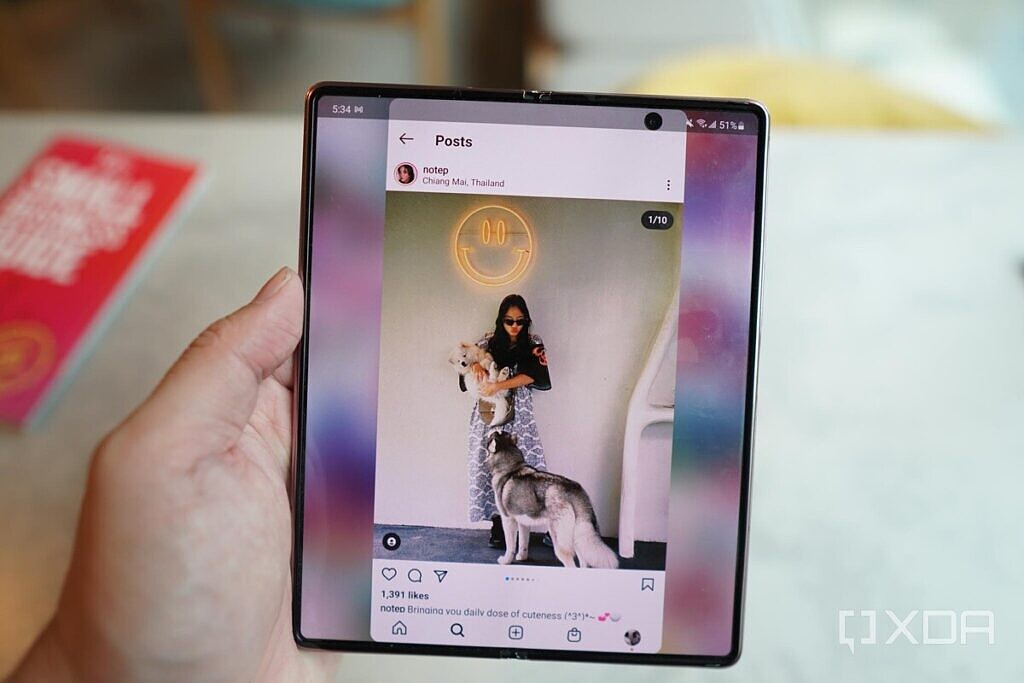 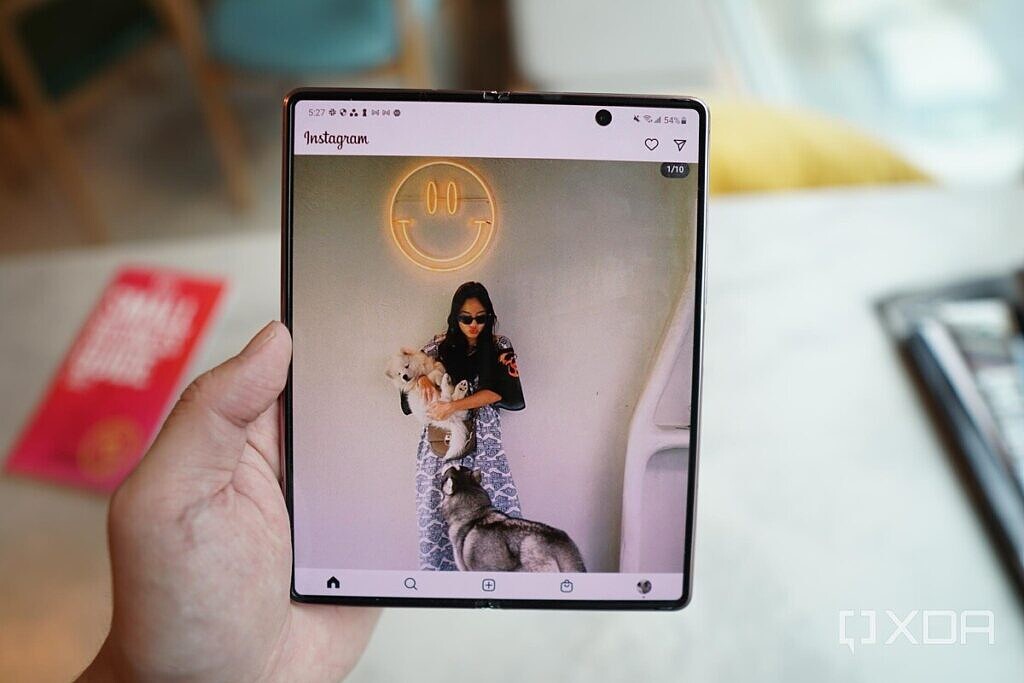 Sure, app makers can optimize their apps to fit into these folding screens perfectly — and Samsung’s first-party apps all do so — but it’s highly unrealistic to expect every app maker to do so, especially when the foldable market is still niche. This is a problem that will be here to stay for the foreseeable future. 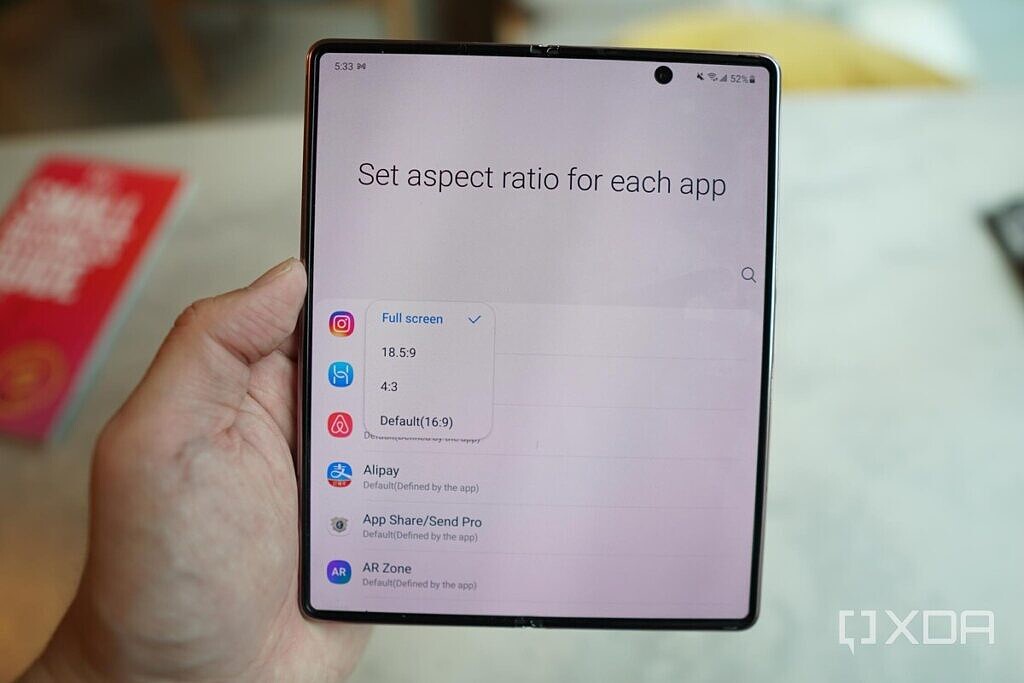 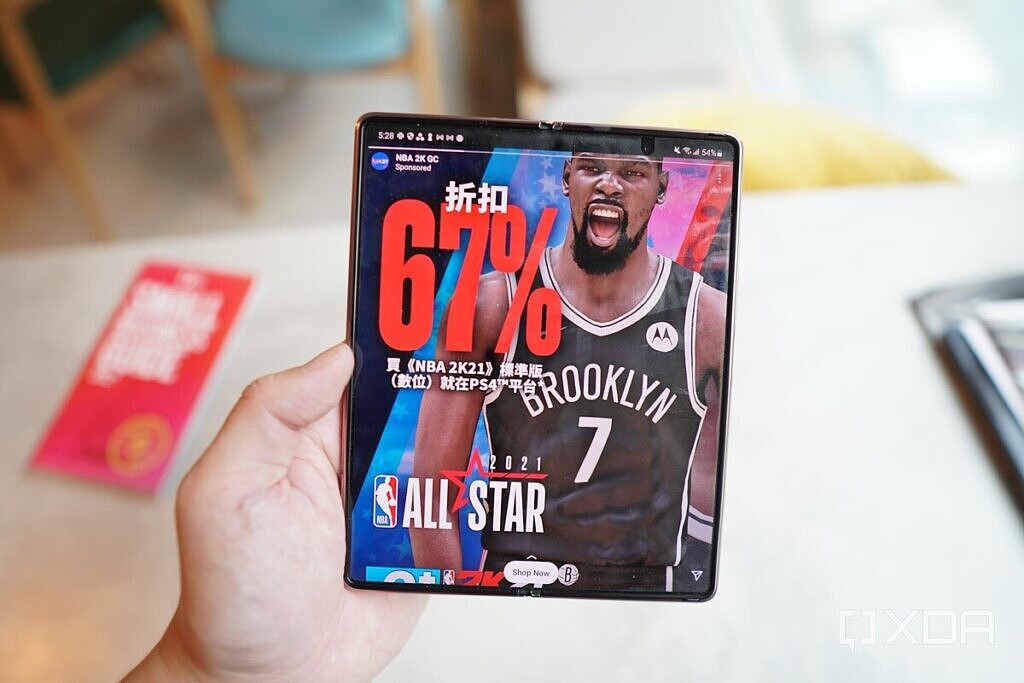 It’s not too big an issue on the Galaxy Z Fold 2 for most word-based apps. Chrome, when stretched out, is slightly odd-looking, but it doesn’t break performance or the experience. But photo-heavy apps like Instagram are trickier to handle. Distorting an image by stretching it is obviously not ideal, so Instagram on the Galaxy Z Fold 2’s big display must run either in letterboxed format, or a cropped format that chops off the top and bottom of Instagram Stories. I can cycle between either option via the Samsung Good Lock app, but shouldn’t Samsung build this functionality natively into the phone’s software instead of requiring an additional download?

Better yet, how about giving us the option to quickly swap between the three display options (letterboxed, cropped, stretched) in real-time? Maybe a pop-up button on the screen, a multi-finger gesture, or a shortcut toggle in the navigation panel? We see room for improvement here.

To some people, foldable phones are still synonymous with “fragile.” Personally, I think the reputation is no longer a fair assessment — I’ve used the original Fold, Z Fold 2, and Z Flip for over a year combined and all of them still work fine — but it’s understandable why some mainstream consumers are still wary, given the high profile failures of the original Fold’s early review units.

So for the Galaxy Z Fold 3, I would like to see increased durability of some sort. I know asking for IP68 water- and dust-resistance is probably highly unlikely for a foldable device. But how about a lesser IP rating, similar to those seen in earbuds, like IPX3 or IPX4?

If Samsung can’t provide a tangible “proof” of durability like an IP rating, then perhaps, it can give buyers more ease of mind by extending the warranty period from one year to 18 months or even two years? Samsung already seems quite confident with the Galaxy Z Fold 2’s durability, as it offers a 100-day return period, so further assuring customers that foldables are not fragile could go a long way in pushing this product category into mainstream acceptance.

What would you like to see on the Samsung Galaxy Z Fold 3?

Overall, I don’t want to make it sound like I have a lot of gripes with the Galaxy Z Fold 2 — it’s still my favorite phone of them all (the Mate X2 probably would have overtaken it were it not for the Google problem). But the above upgrades are reasonable to ask for, considering most have already been achieved by other brands.

With the Samsung Galaxy Z Fold 3 likely just half a year away, chances are most of the hardware changes have already been set in stone, so this list is purely hypothetical. If Samsung hasn’t already applied these changes, it’s probably too late to see them in the Galaxy Z Fold 3.

But Samsung, after all, is the pioneer of the foldable category, so their engineers likely have some tricks up their sleeves no one expects.

The post Samsung Galaxy Z Fold 3: Here’s what we want to see in Samsung’s next prime foldable appeared first on xda-developers.