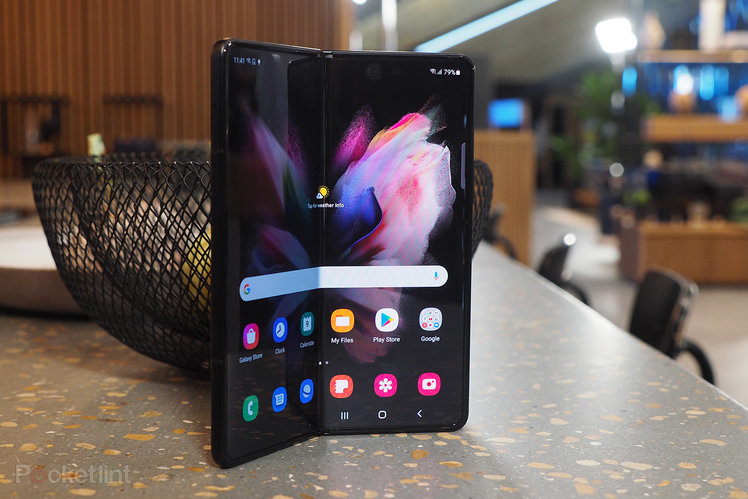 The Samsung Galaxy Z Fold 3 is one of those few’wow moment’ devices to arrive in 2021. Not because it’s a huge advancement over its predecessor – as it’s really not – but because that massive foldable screen is probably unlike anything else you’ll have ever seen. It’s like staring into the future.

Key to that display is the new under panel camera (UPC), which attempts to hide the selfie camera from view for an uninterrupted visual experience. It’s certainly representative of the Z Fold 3’s sheer ambition, despite not being entirely successful in its endeavours.

There are other tweaks in an attempt to make this third-gen device more enticing than ever before too: the asking price, while still massive – don’t gasp too loudly, it starts from £1599/€1799/$1799 – isn’t as large as its predecessor; plus there’s the addition of S Pen stylus support.

But is being ambitious truly enough to sell a foldable device over the current norm? We’ve been living with the Z Fold 3 for a full week to see if this is the future or simply an overambitious foldable flop.

If you lay the Z Fold 2 next to the Z Fold 3 you’ll see they’re not massively different looking. However, the newer device does streamline the camera arrangement so it’s smaller – although that now causes irksome ‘table wobble’ when popping it onto a desk or other flat surface – and the front display is actually a little less tall (it’s 24.5:9 aspect rather than 25:9 of the older device) but offers a 120Hz refresh rate too.

The bigger take-aways are, as we already pointed out, the under display camera (UPC) and the addition of S Pen support – but the stylus isn’t integrated into the device so doesn’t make as significant a change as you might think. There’s a new no-Bluetooth S Pen Fold Edition which, as its name suggests, only works with the Z Fold 3 (the S Pen Pro is also compatible, while being suitable for other supporting devices in Samsung’s range too). We’ve not been provided with the stylus, however, so cannot comment on its functionality.

In its folded position the Z Fold 3 is the slightest bit slimmer than its predecessor – at a neat 16mm on the folding edge; 14.4mm at the opposite end – but that’s hardly slim by any modern phone standards. It’s therefore a big wedge to hold in this ‘normal phone’ format.

The front panel is also marginally different to before, now delivering that 120Hz refresh rate and that 24.5:9 aspect ratio, so it’s shaved a millimetre off the overall footprint height. You won’t really feel that in the hand, though, but at least this main display fills the majority of the device’s front – something that wasn’t the case with the first-generation model. That said, the front display has an almost perplexingly small sense about it – it’s just a bit too narrow to really feel like an expansive flagship device in this folded sandwich format.

But the real reason to buy the Z Fold 3 is because of its massive foldable screen, featured within, which measures 7.6-inches on the diagonal when open, and delivers a high-resolution and 120Hz refresh rate too. Sound familiar? That’s because it’s essentially identical to the Z Fold 2’s offering. So it’s no bigger, no sharper, no better.

It’s supposedly better on account of one main reason: that under panel camera (UPC). Thing is, having at first been impressed by this hidden camera, it’s become clear over longer term use that it’s actually just as distracting – if not more so – than a punch-hole camera in certain scenarios. White backgrounds reveal a criss-cross mesh that’ll inadvertently catch your eyes, for example, so unless there’s ‘busy’ content covering it you’ll too often notice its presence.

As exciting as this massive screen is, it does still suffer from the inherent issues that plague any foldable device. As the OLED panel beneath needs to be protected – and obviously glass can’t fold, so that’s not a material option – this is achieved by using a plasticky coating to allow for all this bending and flexing. That works well, except plastic is reflective and so catches reflections far more than a well-made glass panel.

It’s also the reason why foldable panels often show a ‘crease’ across the fold, where the panel isn’t quite perfectly flat – which also rings true with the Z Fold 3, but as the face-on user of the device you’ll rarely ever focus on this (those viewing adjacently are more likely to see the crease catching reflections, but that’s not a realistic use-case, moreso the viewpoint of a curious observer).

But all this is part and parcel of owning a folding phone, as the pay-off is that humongous screen. Here it’s bright, it’s colourful, it’s been glorious for consuming content. It’s really approaching tablet-like in its scale.

After transferring our apps and digital life over to the Z Fold 3, we’ve found it to function every bit as smoothly as anticipated. It’s a massively powerful device, thanks to a Snapdragon 888 processor under the hood, alongside a meaty 12GB RAM as standard. That ensures running multiple apps, including those optimises for the larger screen, function with little delay and navigating between them is a breeze. 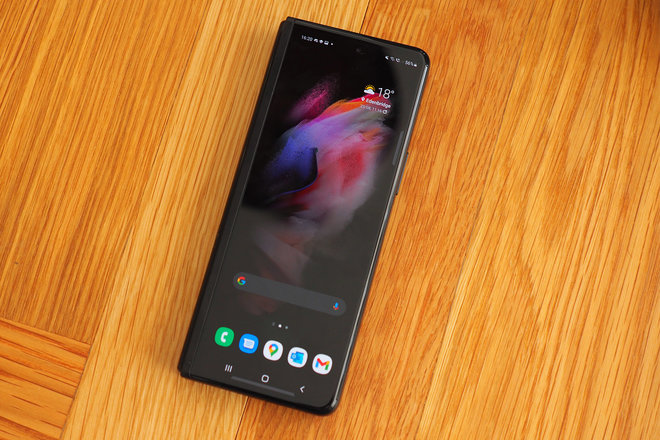 Just as we said of the earlier Z Fold 2, once you get used to this giant panel you’ll begin to appreciate its adeptness with different layouts in certain apps – Outlook, for example, is a split-screen experience with inbox on the left and preview on the right – which is why this ultra-unusual aspect ratio and real-estate makes a lot of practical sense.

When it comes to gaming that much larger aspect ratio is like a whole new view onto virtual worlds, too, with our favourite games revelling in the additional height that’s on offer here when playing in landscape orientation. There’s also Game Booster controls to ensure no unwanted distractions from other apps come into play, which is certainly handy.

Initially we wondered whether having the top-tier Qualcomm processor for 2021 would cause issues with overheating. But as there’s so much room for components to be spread out behind that giant display, we’ve not found overheating to be an issue at all. Even an hour at a time of playing South Park: Phone Destroyer hasn’t caused any problems with heat or battery-sapping behaviour. 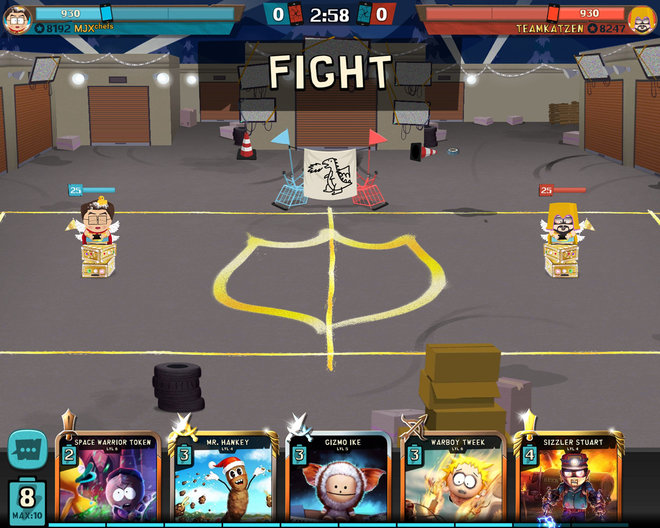 Battery life we’ve not found to be too sad overall. With typical use, including some gaming, around 12-14 hours of use will take us to the final 20 per cent of charge – which is just enough for a working day. That’s about right considering the 4,400mAh cell here and that massive screen.

Sadly, however, Samsung doesn’t include an actual wall plug in the Z Fold 3’s box. You only get a USB-C-to-USB-C cable (i.e. small fitting at both ends). Which, for us, isn’t very useful as we don’t have any spare mains plugs with a USB-C port type, they’re all Type-A instead (the larger fitting). Seeing as we write about tech and move into a new phone for review pretty much every other week, if we find that a problem, then most buyers will have a conundrum when it comes to charging.

Samsung hasn’t significantly pushed forward in terms of the Fold 3’s camera spec – as you’re getting a triple 12-megapixel offering, delivering a wide-angle, ultra-wide, and 2x telephoto zoom (with up to 10x digital zoom) – but they’re fairly decent cameras overall. 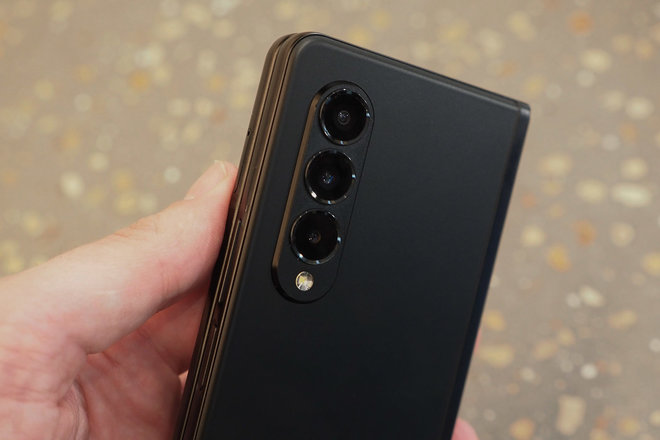 The big shift for this third-gen device is with the camera housing design. It looks much neater and tidier, in a smaller container, and doesn’t protrude an unsightly amount from the rear of the phone. It fits better into the Samsung family design overall. Still, we’d rather have seen some higher-resolution offerings in the mix this time around, to put the Fold up there with Samsung’s very best. This, surely, will be where the next-gen Z Fold 4 will step things up in 2022.

Anyway, back to the phone at hand. Using the Z Fold 3 to take pictures can at times feel a little strange, as the sheer scale of the unfolded phone makes it feel more like shooting with a tablet. That said you don’t have to have the phone unfolded, the same cameras are available in its closed position, too, but the image preview is a little small with a lot of the screen blacked-out in order to maintain the shooting aspect ratio.

The app is pretty straightforward to use, with savvy autofocus, face detection, and easy-to-use tap-to-focus that works really well whether focusing on near or far-away subjects. Swapping between wide, normal and zoom is available at the tap of a button, too, which is nice and easy.

All three deliver good results, showing that you simply don’t need the depth sensors, black and white sensors and whatnot that other makers are so keen to peddle. By keeping it simple, and the software experience strong, Samsung shows-off what’s possible with the core basics. The trio of cameras are relatively consistent in terms of results, too, which shows a job well done.

Samsung has also done a great job with low-light capture, either when shooting at night or just when there’s little lux available. The camera just seems to understand when you’re in a really low-light situation and kick into the appropriate auto night mode, continuing to deliver decent quality results. Sometimes the numerical values really aren’t what matters, it’s down to the results, as this foldable acquits itself well.