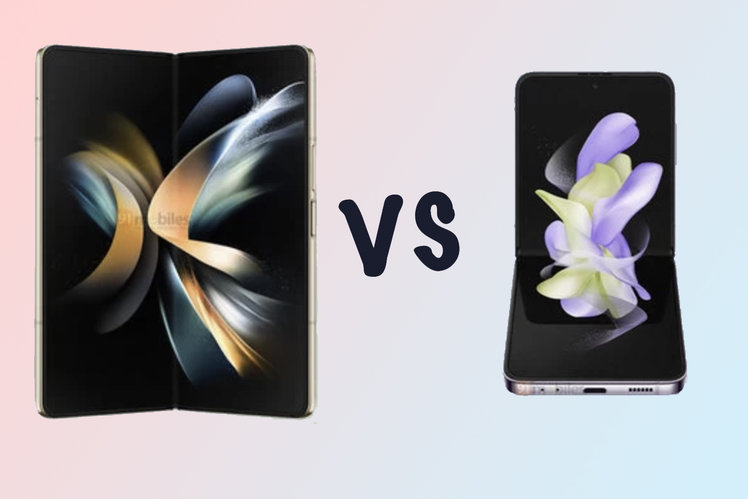 Samsung is expected to announce the Galaxy Z Fold 4 and the Galaxy Z Flip 4 during an event on 10 August 2022, alongside the Watch 5 and Watch 5 Pro.

How are the two rumoured to differ aside from their designs though? We’ve put their rumoured specifications up against each other to each other and which might be the right one for you.

The Samsung Galaxy Z Fold 4 is rumoured to be offering a very similar design to its predecessor. It is therefore expected to offer a book style design, with a vertical fold, an external display on the front and three camera lenses on the rear.

Based on the leaked renders of the device, the rear camera lenses may sit independently rather than in a housing and there might be an under display camera on the front screen to match the one on the inner display.

The Galaxy Z Fold 4 also might have an S Pen built in, though this is currently uncertain based on rumours, and it is thought to be coming in Gray Green, Beige, Burgandy and Phantom Black colour options.

The Galaxy Z Flip 4 meanwhile, will be a clamshell device folding device, with a horizontal fold instead, meaning these two handsets differ vastly in terms of design. The Galaxy Z Flip 4 is rumoured to have a dual camera with an external display next to it, taking up just over a third of the back.

On the inside, the Galaxy Z Flip 4 is expected to have a camera at the top of the display but it is not clear if it will be an under-display camera or a punch hole camera. Four colour options have been suggested and they are said to be called Graphite, Bora Purple, Pink Gold and Blue.

Both the Z Fold 4 and the Z Flip 4 are expected to have squared off frames and both offer IP water and dust resistance ratings. The Z Flip 4 is not expected to offer S Pen functionality.

The Samsung Galaxy Z Fold 4 is rumoured to be coming with a 6.19-inch external display and a 7.56-inch internal display. It’s expected to offer a ratio that delivers a pretty square screen when the device is unfolded and it is expected that both the inner and outer display will offer a 120Hz refresh rate.

Both the Samsung Galaxy Z Fold 4 and the Z Flip 4 are rumoured to run on the Qualcomm Snapdragon 8+ Gen 1 chipset. It’s said the Galaxy Z Fold 4 will have either 12GB or 16GB of RAM with potential storage variants of 128GB, 256GB, 512GB and 1TB.

Both devices are expected to be 5G capable and they are both expected to have physical fingerprint sensors rather than under display options.

The Samsung Galaxy Z Fold 4 is rumoured to be coming with a triple rear camera. There are some conflicting reports, but it’s thought this rear setup will be comprised of a 50-megapixel main sensor, 12-megapixel ultra-wide sensor and a 12-megapixel telephoto sensor with 3x zoom. On the front, it’s said there will be a 10-megapixel snapper, while the inside front camera is said to be an under-display camera and offer a 16-megapixel resolution.

The Samsung Galaxy Z Flip 4 meanwhile, is said to have a dual rear camera, though its specifications haven’t been detailed in rumours as yet. It’s possible it could be the same as the Z Flip 3 which would be two 12-megapixel sensors – one of which is a wide angle lens with f/1.8 aperture and the other is an ultra wide-angle lens with an f/2.2 aperture.

On the front, the Z Flip 3 has a 10-megapixel selfie camera with f/2.4 aperture, so the Z Flip 4 could offer the same.

The Z Flip 4 meanwhile, is rumoured to start at €1080, which is a little more than the Z Flip 3 cost in Europe. While UK and US prices haven’t been rumoured, if there is a price increase, we’d still expect it to be quite a bit cheaper than the Z Fold 4.

Both are rumoured to run on the same hardware, though the Z Fold 4 is expected to have more RAM and offer a more advanced camera system. It is also expected to offer support for the S Pen. The Z Flip 4 meanwhile, looks like it will continue to be a solid device like its predecessor, but aimed at a different audience to the Z Fold 4, and offer a cheaper price point too.

For now, nothing is confirmed, though we will update this feature as the details are confirmed on 10 August.