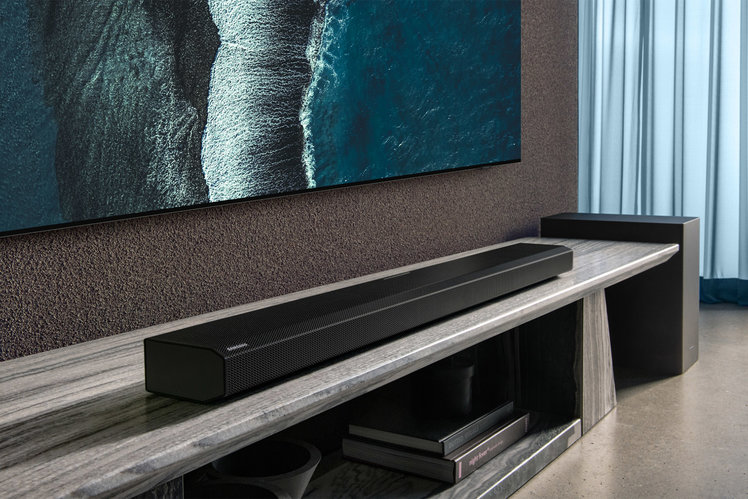 New this generation is the inclusion of Apple AirPlay 2, and optional wireless rear speakers with upward-firing drivers, allowing expansion to a 5.1.4-channel system. Owners of supporting Samsung TVs not only benefit from Q Symphony integration – which can use the TV’s speakers in addition to the soundbar for added immersion and height – but also SpaceFit Sound for optimised setup that automatically tunes sound profiles wherever your TV is setup in the room.

Are these small additional benefits reason enough to buy the HW-Q800A or would it make more sense to look at the HW-Q800T instead to save a few quid?

The Samsung HW-Q800A uses exactly the same cabinet as the earlier Q800T, retaining a sleek form-factor designed to fit under your TV without blocking the screen. It’s a sensible width, but can still handle larger screen sizes up to 65 inches. The overall look is stylish, with solid construction and a matte black finish.

There’s a metal wrap-around grille, behind which you’ll find three speakers at the front, and the Acoustic Beam holes along the top front edge – these are used to output sound so it appears to come from where the action is happening on screen, made possible by clever processing.

There’s a display located at the front right, which provides basic information, and a choice of stand- or wall-mounting, with brackets provided for the latter included in the box.

The included wireless active subwoofer uses a rear-ported enclosure and a side-firing 8-inch driver that Samsung claims can go down to 35Hz. It’s well made, with similar styling and a matte black finish. The sub should pair automatically with the soundbar, but if not there are buttons on both units for manual setup. 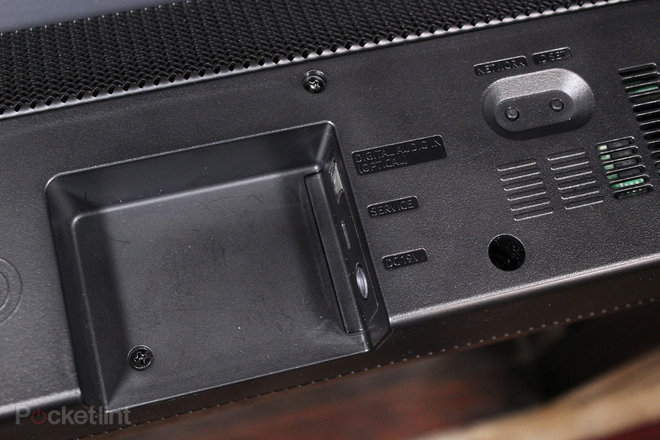 The Samsung HW-Q800A sports an HDMI input and an HDMI output that supports eARC, allowing lossless audio to be sent back from a compatible TV. The HDMI connections also pass resolutions up to 4K/60p and every version of high dynamic range (HDR10, HLG, HDR10+, and Dolby Vision).

The only other physical connection is an optical digital input, but there’s also Bluetooth, Wi-Fi, and the newly added AirPlay 2, allowing for agnostic music streaming from your network or third-party services. Bluetooth is paired using the dedicated button on the remote, while the Wi-Fi setup uses the Samsung SmartThings app via your phone/tablet.

There are basic controls centrally located on the top of the soundbar for on/off, source select, volume up/down, and far-field mic on/off. The included remote is the same zapper from previous years, but remains well-designed, comfortable to hold, and easy to use, with all the necessary buttons laid out in a sensible fashion. 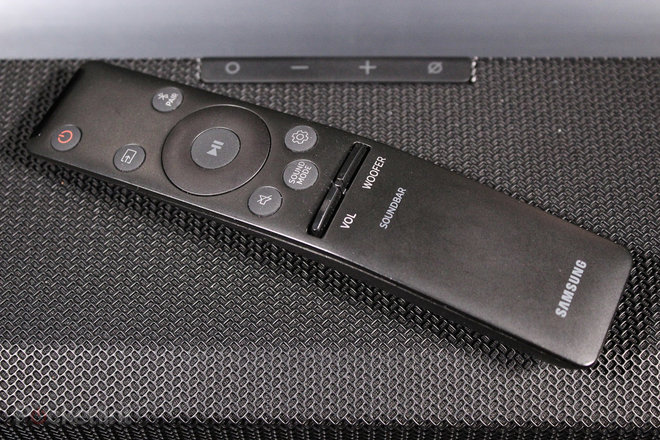 The SmartThings app isn’t just for setup, but also offers a degree of control. The slick and intuitive interface allows for changing inputs, adjusting the volume, choosing between sound modes, optimising the equaliser (EQ) and woofer, and selecting the advanced settings (voice enhancement, bass enhancement, and night mode).

Setup is straightforward, but a degree of tweaking is required when it comes to getting the centre and front height channels adjusted so the overall soundstage is balanced. The HW-Q800A doesn’t generate its own test tones, meaning you’ll need to find those yourself, and the levels work on the left and right channels simultaneously, which can be an issue in asymmetric rooms.

It would be better if you could set the left and right front heights independently, along with the surrounds and rear heights if you add the wireless rear speakers, and it would also be useful if you could set them using the SmartThings app rather than the remote and front display.

The sub is a powerful beast so you’ll need to dial the woofer setting back to ensure it doesn’t swamp the mid-range. As the driver fires sideways, avoid putting it in the right-hand corner of a room, or it’ll get boomy. Positioning towards the front, halfway between the ‘bar and wall works best, with this boom box generating more than enough low-end juice to handle sizeable rooms.

A built-in automated setup feature would be welcome at this price point, but if you own a compatible Samsung TV you can at least benefit from SoundFit. This uses the TV’s microphone and processor to analyse the sound reverberations in the room and adjust them accordingly to optimise the overall sonic performance of the soundbar.

The inclusion of Amazon Alexa makes this soundbar a fully-functioning smart assistant, allowing users to ask questions, listen to music or podcasts, and enjoy hands-free voice control. There’s a far-field microphone built into the soundbar itself, which can be muted for privacy, and thankfully Alexa interacts at a sensible volume (unlike in the Polk React, for example, where she’s very shouty).

The Samsung HW-Q800A decodes the Dolby Atmos and DTS:X object-based audio formats, and delivers both with an actual 3.1.2-channel speaker layout. This means it doesn’t need to rely on psychoacoustic trickery to create a sense of immersion, and if you take the time to setup the system properly, the results are often spectacular. 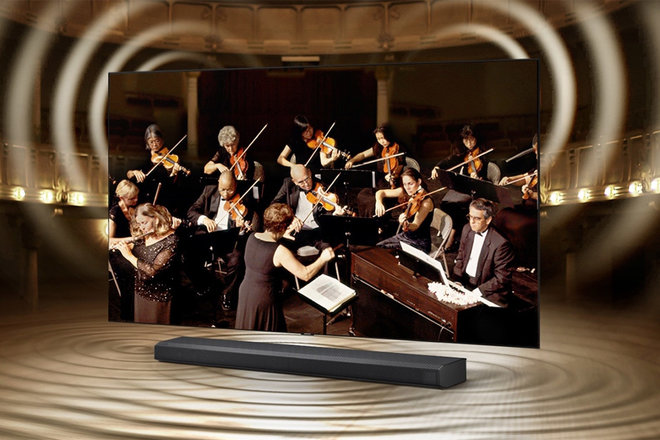 The effectiveness of the Acoustic Beam tech, which literally fires sound waves upwards to create the illusion of overhead channels, will depend on your type of ceiling – but the more reflective it is, the better the effect. Watching a dynamic object-based mix like the 4K disc of Midway reveals an expansive front soundstage, with precise placement of effects and plenty up top.

The subwoofer handles the low frequency effects with great skill, producing a foundation of bass on which the rest of the system is built. If you like plenty of subsonic impact in your movies, you’ll enjoy this particular woofer, which enthusiastically digs deep. It’s also well integrated with the ‘bar, smoothly crossing over with the mid-range drivers, and creating a cohesive overall soundstage.

The performance is energetic, with clear dialogue and a pleasing width to the delivery. The only limitation is that the soundstage is very front-heavy, due to the lack of actual surround speakers. However this can be addressed by buying the optional SWA-9500S wireless rear speakers that now include upward-firing drivers, allowing expansion to a full 5.1.4-channel configuration.

Samsung’s Q Symphony feature integrates the soundbar with compatible Samsung TVs, synchronising sound from both devices and utilising the additional speakers in the TV to create a more expansive and immersive front soundstage.

There’s also the Active Voice Amplifier which detects ambient noise, analyses the audio signal, and adjusts and amplifies the dialogue with respect to the other channels to improve intelligibility. So if you’re trying to watch TV while someone else is hoovering, for example, this could come in handy.

There are five dedicated sound modes, with the default Standard making no changes to the incoming signal. The Surround mode up-mixes the audio to take advantage of the additional channels, while the Game Pro enhances effects to create a more immersive gaming experience. For general TV viewing the Adaptive Sound is a great choice, analysing the incoming signal and automatically optimising it. Finally, Night mode compresses the dynamic range, so you won’t disturb the rest of the household during a late-night bingeing session. 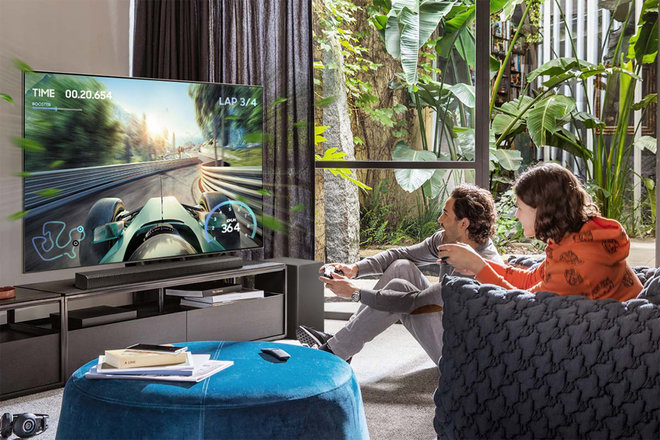 There’s a pleasing musicality to this system’s delivery, with the width producing some excellent stereo imaging, and the sub giving drums a driving beat. You can stream from a number of services too, including Amazon Music, Spotify, Deezer, TuneIn and Samsung Music, plus Apple Music via AirPlay.