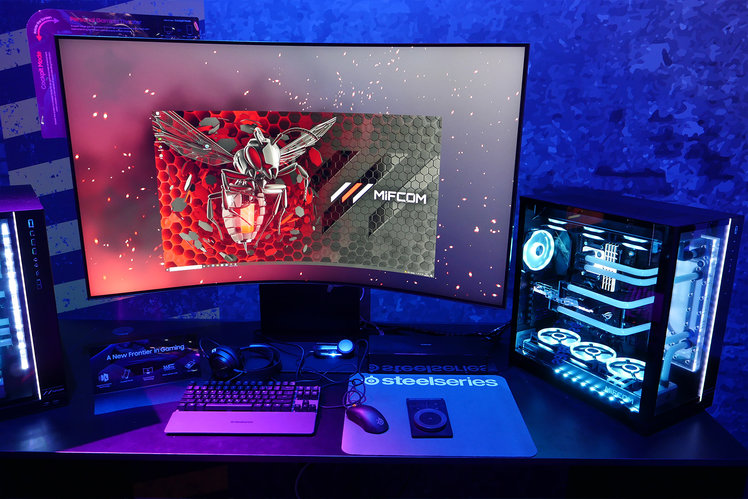 When Samsung unveiled the Odyssey Arc gaming monitor it looked a little bit like the endpoint of curved monitors – a screen so huge that it would basically become your entire field of view if seated at a desk.

It’s maximalist in its ethos and sitting down in front of it at Gamescom 2022 in Cologne (where Samsung launched the 990 Pro SSD), we were equal parts impressed and baffled. This is a superb gaming monitor in many ways, but an absurd one in some key regards.

For many a gaming monitor, design fades into the background in comparison with specs lists and features, but when you walk into a room with the Odyssey Ark in it, the design is pretty much the foremost thing in your mind.

This is a huge monitor – 55 inches by the diagonal, a size that most people would find impressive in a TV, let alone when it’s sat on a desk, and that makes it immediately appealing to a smaller niche of users than most screens.

You’ll need a large desk to accommodate this beast, that’s for sure, especially when you consider that you can have it in portrait or landscape modes and so need the space to allow for the swing between those modes.

The curvature is pretty significant, too, at 1000R, and between that curve and the screen’s sheer size, you’ll find that sitting a couple of feet away from it still leaves you completely consumed by the Odyssey Ark. 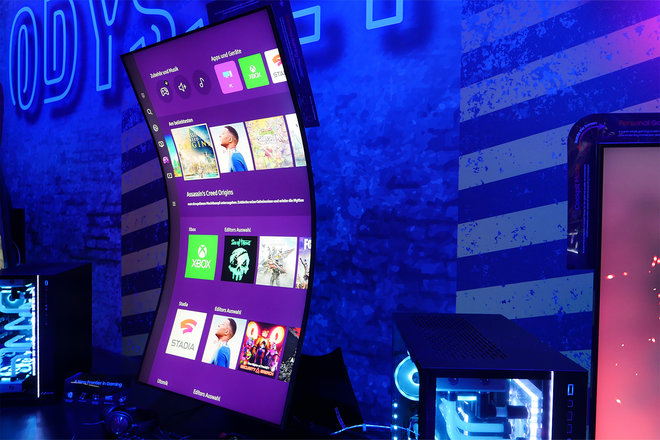 Moving between vertical and horizontal is relatively easy – you just extend the monitor to its maximum height and then swing it around, although its size means there’s a bit of weight to move there. On that topic, though, let’s talk practicalities.

Having a vertical monitor is nothing crazy, and can be really useful for some workflows while being able to swap between the two orientations is even better. However, when the screen is this big, things start to fall apart a little.

Sitting in front of the Odyssey Ark in vertical mode is like being in a flight simulator or an arcade racing cabinet – the screen looms over you thanks to its curvature, making looking up at its top literally a pain in the neck.

In this layout the Ark can accommodate three separate monitor spaces in a stack, each coming from a source of your choosing, so multitasking options are manifestly there, but we just cannot see how this would be preferable or more comfortable than two or three normal monitors arranged as you want them. Doing that even with high-quality HDMI 2.1 monitors would still almost certainly come in well under the Ark’s huge £2,599 or $3,499.99 price. 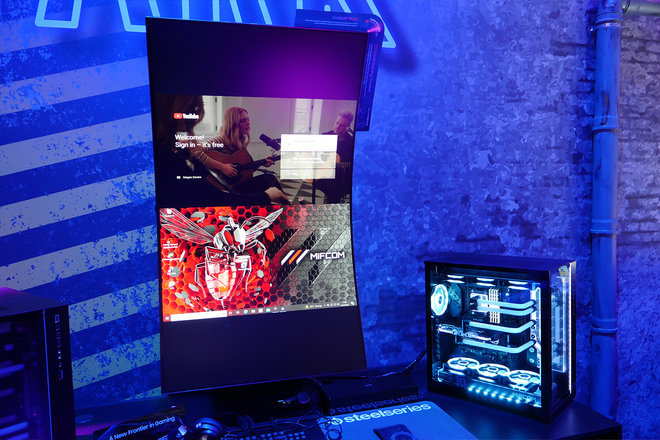 Moving between these different options on the Ark, selecting your modes and more is all done through the Ark Dial, a desktop controller that’s fairly sleek and cool, although slightly limited by its dial interface at times. It’s a great idea to have its controls brought forward and accessible, though, compared to the nightmare of fiddling with unseen fobs and buttons on the back of the screen.

If that’s a lot of hesitation about whether the Odyssey Ark makes economic sense, it’s fair to point out that on the face of it, the technical side of the display looked excellent in our brief time with it.

While we weren’t able to actually game, the Ark has a good enough refresh rate to be competitive at high levels, while its Quantum Mini LED backing made for really bright and vibrant image quality even in a really challenging lighting situation.

Brightness is a big part of that, along with an anti-glare coating that’s clearly putting in top-quality work. With HDMI 2.1 on board it’s clear that anyone who does pick up the Ark and hooks up either a next-gen console or a solid gaming PC to it will have an absolute whale of a time.