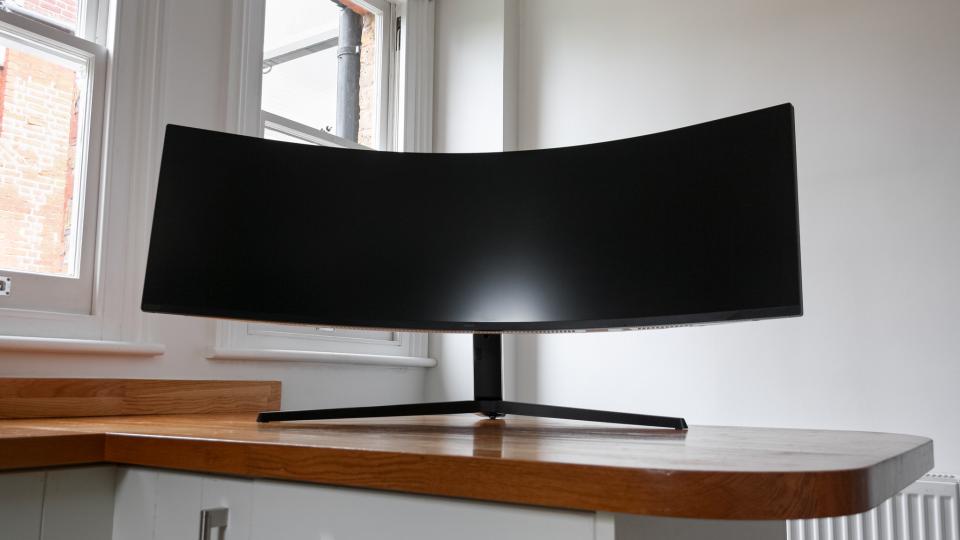 The Samsung Odyssey Neo G9 is a monster. Measuring 49in from corner to corner, it arrived on my doorstep in a box big enough to sleep in. Once I’d put the G9 together and heaved it cautiously onto my desk, the sheer size of the screen left me at a loss for words. At the time of writing, I have two other 27in gaming monitors in for testing, and the Odyssey Neo G9 dwarfs both by a vast margin.

On paper, this appears to be the ultimate gaming monitor. The Neo G9 is the successor to last year’s Odyssey G9, and while it looks quite similar at first glance, it has several industry-changing features hidden beneath its space-age white plastic exterior. This is the world’s first Mini LED gaming monitor and it comes with a wildly impressive-sounding HDR 2000 certification (although that in itself is another story). It’s also the first gaming monitor to make me exhale loudly through my nose after loading into a game. Put simply, if you can afford the astronomical price tag, the Samsung Odyssey Neo G9 offers an unparalleled gaming experience.

Samsung Odyssey Neo G9 review: What you need to know 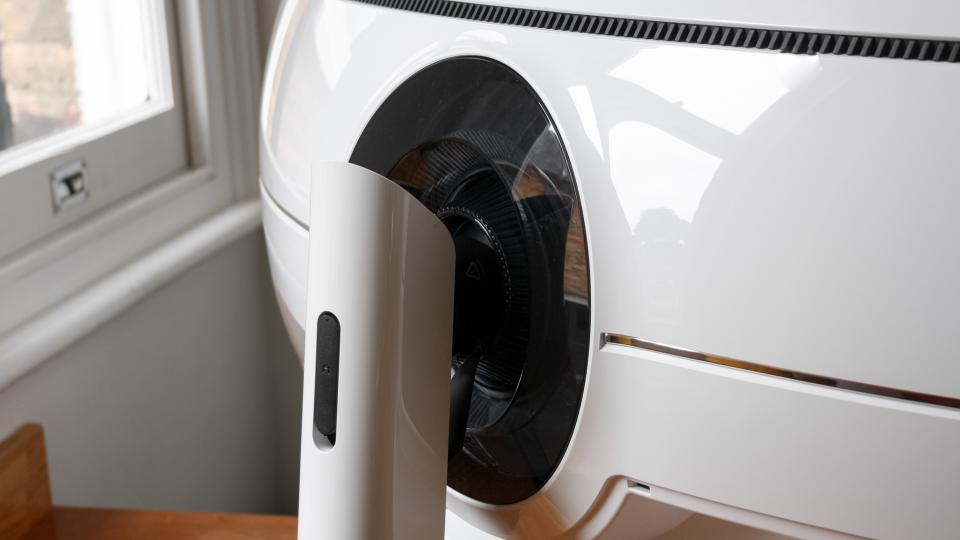 The Neo G9 has a VA (vertical alignment) LCD panel, backlit using Mini LED technology. This means the LEDs that form the backlight are up to five times smaller than normal (0.008in, compared to 0.04in), reducing the amount of backlight bleed and improving overall accuracy. Mini LED TVs are becoming more prevalent these days as an alternative to OLED, but this is the first time we’ve seen the technology used in the monitor industry.

This astonishing display is mounted on a stand that can be raised and lowered by 120mm, swivelled 15 degrees left and right and tilted backwards 13 degrees (that’s more than most monitors of this size, which is great). Fair warning: this is a large stand. The legs themselves splay out around 80cm at their widest, and the product itself is roughly 42cm deep with the stand attached. It does, however, have a hollow portion to run cables through, and Samsung provides a snap-on cover should you wish to hide the ports from view as well.

Speaking of which: the Neo G9 has exactly the same number of ports as its predecessor, which is to say precious few for such a behemoth of a monitor. On the rear you’ll find two HDMI 2.1 ports, one DP 1.4 port, two USB 3.0 ports, one USB-B port and a 3.5mm headphone jack. Sadly, you won’t find an HDMI 2.1 cable in the box: just a DP cable, power lead, USB-B to USB-A cable and assorted documentation. It’s also worth pointing out that although HDMI 2.1 is the gateway to next-gen gaming, the PS5 and Xbox Series X offer no super ultrawide support, so your picture will be horrendously stretched.

There’s precious little to match the Samsung Odyssey Neo G9 on the specs front, and even less by way of competition in the price department. At a wallet-busting £1,849, the Odyssey Neo G9 is £570 more expensive than its predecessor, the Odyssey G9, and far and away one of the most expensive monitors you can buy right now. 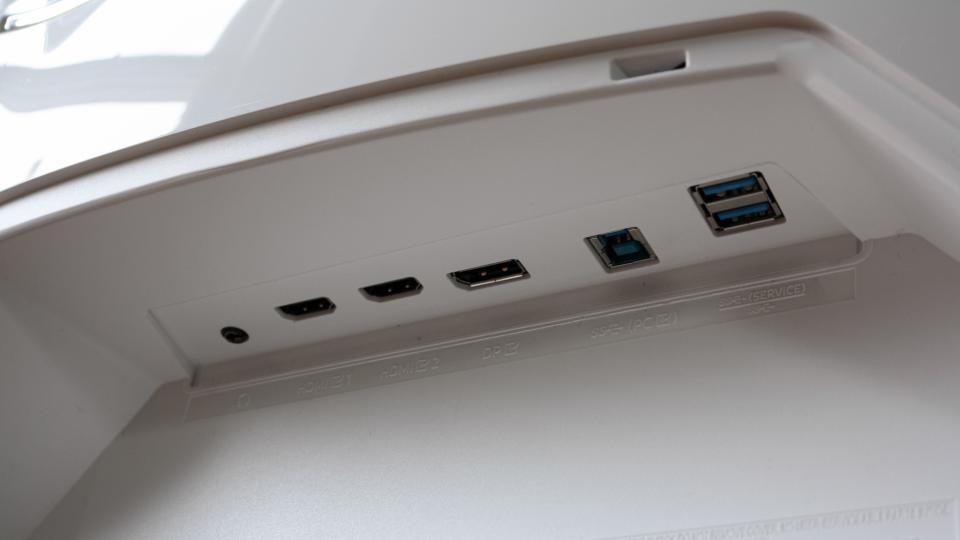 If it’s super ultrawide monitors you’re after, you could go for AOC’s AG493UCX, a 120Hz 49in 5,120 x 1,440 gaming monitor with an £800 price tag. Or the LG UltraWide 49WL95C (£1,050), a productivity monitor with an IPS panel of the same size and resolution but a refresh rate of just 60Hz. There are other similar super ultrawide monitors out there, but not one of them can match the Neo G9’s incredible HDR-ready panel, so to all intents and purposes this monitor sits in a league of its own.

READ NEXT: The best budget monitors to buy

If you’re undeterred by the humongous price tag, then be assured that the Odyssey Neo G9 is worthy of your attention. The Odyssey Neo G9 performs admirably in its default SDR configuration, although you’ll need to activate HDR in Windows 10 to really open the throttle and push the display to its intended limits.

Straight out of the box with dynamic brightness switched off, the Samsung Odyssey Neo G9 covered 99.6% of the sRGB colour gamut, and 91% of the DCI-P3 gamut. That’s roughly the same as our results from the Odyssey G9, as is the measured peak luminance of 453cd/m² and contrast ratio of 2,431:1.

It’s worth noting that with dynamic brightness engaged, the Neo G9 topped out at an impressive contrast ratio of 6,491:1. This is evidence of the Mini LED backlight at work.

In our tests, the default picture mode was the most accurate. The average colour variance (delta E) of 2.0 means that you’re unlikely to notice any wayward or unnatural colours – only colour errors above a delta E of 3 are humanly perceptible. You might hope for an even better figure given the price tag, but this is a solid result. Whether you’re watching films, gaming or using a web browser, the panel’s SDR performance is very good indeed.

Sadly, my ageing PC was never going to manage 240 frames per second at 5,120 x 1,440, but a quick look at the Blur Busters UFO test confirmed that the 240Hz refresh rate was functioning as intended – although you do have to enable it in the OSD.

Similarly, my response time tests produced nothing out of the ordinary. The Neo G9 has four response time modes that produce increasingly more ghosting as you cycle through them. The fastest, Extreme Motion Response Boost, produced what I would call an annoying amount of ghosting, but on the whole the monitor feels effortlessly responsive.

Mini LED technology makes the Neo G9’s backlight unique among gaming monitors – and the arrival of full array local dimming (FALD) on the Neo G9 completely eclipses the edge-lit local dimming found on the Odyssey G9. There are now a whopping 2,048 individual local dimming zones beneath the Neo G9’s panel, a vast improvement over the underwhelming 10 zones on the G9.

This allows the Neo G9 to reach blisteringly high luminance levels – I measured 2,200cd/m² on a 10% white window. As a result, anything you choose to play in HDR – I picked out Far Cry 5, Battlefield V and Star Wars Battlefront II as well as HDR sample videos on YouTube – looks absolutely stunning.

The Mini LED backlighting helps to produce impressive levels of detail from the brightest highlights to the darkest corners, and colours in HDR content look suitably rich and vivid. Star Wars Battlefront II was a particularly great example, with dark passageways streaked with sunlight giving way to neon blaster fire and gleaming lightsabers.

Whatever you decide to play, you’ll need to keep the Neo G9 in Dynamic HDR mode if you want the highest peak brightness. Standard HDR mode drops the maximum luminance to around 1,100 nits, so may be a good choice for darkened rooms and late night gaming.

The Neo G9 is a seriously heavy monitor. At 14.5kg including the stand, you might want to enlist the help of an assistant both to assemble the monitor and place it on your desk. Like its predecessor, the Neo G9 demands an enormous amount of space, so check the dimensions before you buy. In spite of its vast panel, however, I found that the Neo G9’s spindly stand left plenty of room for my PC speakers and other desktop essentials.

Assembly of the Neo G9 was slowed by the irritating absence of an instruction manual but proved pretty straightforward in the end. There’s no denying the impact that the ostentatious, futuristic rear panelling makes; my partner gasped audibly when she stumbled across the Neo G9 in our office. I think it looks pretty cool, personally, and it’s a particularly nice touch if your desk doesn’t back straight onto a wall.

It’s also an astonishing productivity monitor: the 1000R curve looks severe from behind but is perfect for keeping two full-sized windows side-by-side without hurting your neck.

Playing with the on-board settings is intuitive. The OSD is navigated via a joystick and button combo which never once confused me. You will need to learn the various possible combinations of features: HDR is unavailable when you use the picture-by-picture or picture-in-picture mode, for example, and response time/input lag controls are greyed out until you disable adaptive sync. My only issue is that changing a major setting (eg, switching colour mode) closes the OSD completely, meaning you can’t adjust these settings in a hurry.

The Odyssey Neo G9 lacks expected niceties such as USB-C ports, yet still has a ring of RGB “Infinity lighting” that circles the point where the monitor meets the stand. Sure, it’s lovely that it can react to what’s going on in-game (like Philips’ Ambilight TVs), but at this price we’d pick connectivity over LED lighting.

Minor moans aside, the Neo G9 is the best HDR gaming monitor to date. And it’s not just because of the eyeball-singeing brightness – the panel’s curve, high refresh rate, low response times and colour accuracy are all on the money. There’s no avoiding the enormous price tag, but it buys you truly class-leading performance. If you can afford it, and your PC can handle it, there’s nothing better on the market today.