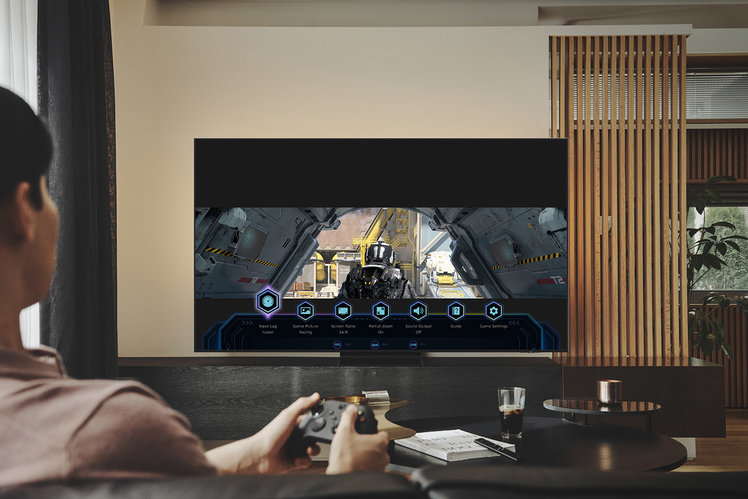 The Samsung QN95B is the company’s flagship Neo QLED 4K HDR TV for 2022, and not only incorporates a Mini LED backlight and Quantum Dot filters for brighter and purer colours, but also the latest Neural Quantum Processor for superior scaling and image processing.

The QN95B is available in 65-, 75- and 85-inch screen sizes. We’re reviewing the smallest of those, which is by no means small, the 65-inch QE65QN95B. Is it worth its lofty asking price if you’re going all-in on a home cinema screen this year?

The Samsung QN95B is clearly influenced by the company’s flagship 8K models when it comes to looks, with the same stylish Infinity One design. Presented as a minimalist slab that measures just 17mm from top to bottom, there’s an attractive brushed metal strip around the outer edge.

It’s a gorgeous piece of industrial design, with a nearly bezel-less screen, and speakers cleverly hidden away in the slimline chassis. The minimal depth is impressive considering there’s a full array direct backlight inside, and this TV looks particularly striking when wall mounted.

If you’d rather use the stand, it has a minimal footprint but provides solid support. Regardless of which approach you take, there’s only a single cable from the One Connect box to the TV, which makes installation easier and tidier.

The One Connect box houses four HDMI inputs, one of which (HDMI 3) supports eARC. All of the HDMI inputs are capable of handling 4K resolution at 120Hz refresh rate, VRR (variable refresh rate) and ALLM (auto low-latency mode), which makes this a great TV for next-gen gamers looking to take full advantage of their new consoles.

There are also three USB ports (two 2.0 and one 3.0), twin tuners for terrestrial and satellite broadcasts, a CI slot, an optical digital output, and an Ethernet port. In terms of wireless connections, there’s Wi-Fi, Bluetooth and support for Apple AirPlay 2. 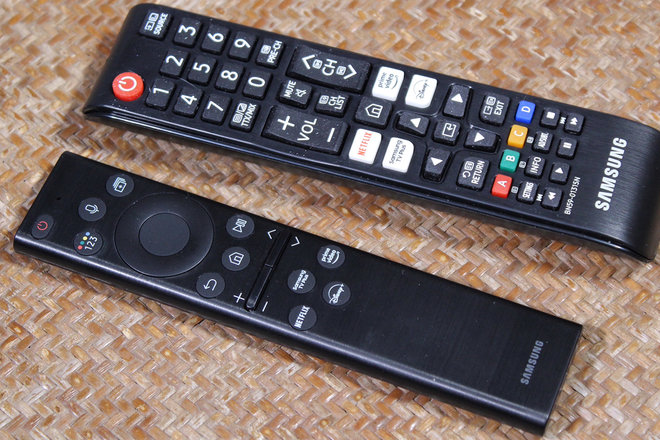 The included Solar Cell remote is ergonomic and eco-friendly, with a built-in solar panel that charges the batteries. It’s a sleek controller that works well, but you might want to keep the included standard black zapper handy for reasons we’ll explain in the next section.

The Samsung QN95B uses the newly redesigned Tizen-powered smart platform, which is something of a mixed bag. Gone is the launcher bar along the bottom, replaced by a full screen homepage where the emphasis is on presenting content and recommendations.

This is generally good, with a comprehensive selection of video streaming apps that includes Netflix, Prime Video, Apple TV+, Disney+, Now TV, Rakuten, YouTube, and all the UK catch-up services. All this content is presented in a sensible fashion, and the customisation and recommendation features are also very effective.

Unfortunately, the more prosaic functions like accessing the settings menu or selecting a different input now require multiple button presses, which quickly becomes tedious. There are also no direct access buttons for settings or inputs on the Solar Cell remote, which is why you might end up using the old-school remote more than you planned.

You won’t find the EPG (electronic programme guide) anywhere in the new smart system either, so if you want to check what’s on TV then you need to press the channel up/down toggle. It took a few days and a phone call to some contacts at Samsung to work this out, but you can thank us later.

Unsurprisingly there’s built-in Bixby voice control, plus the QN95B also works with Alexa and Google. You can even access Siri using AirPlay 2, while the SmartThings app allows for quick and easy setup, plus a degree of control if you don’t fancy using the provided remotes or your voice. 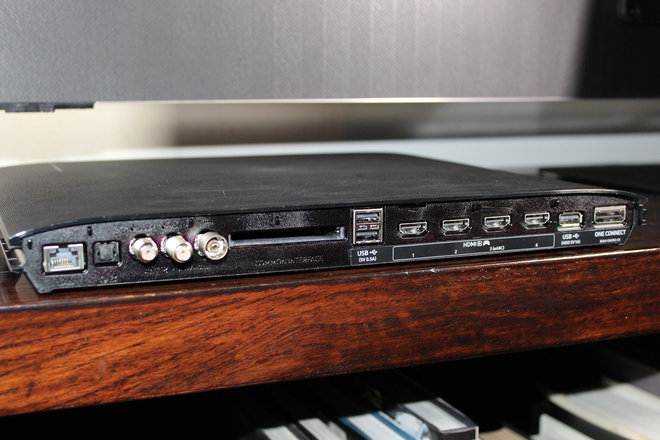 The Object Tracking Sound Pro moves the audio around the room in conjunction with the action on-screen, which results in a seamless and immersive sonic experience. The inclusion of onboard Dolby Atmos decoding is a welcome addition this year, combining psychoacoustic processing with all these speakers to produce an enjoyable object-based experience.

Samsung’s SpaceFit sound tech optimises the audio by analysing the acoustic environment, while Q-symphony integrates the TV’s speakers with supporting Samsung soundbars. However, the QN95’s sonic chops are so good that most people probably won’t feel the need for a soundbar at all. 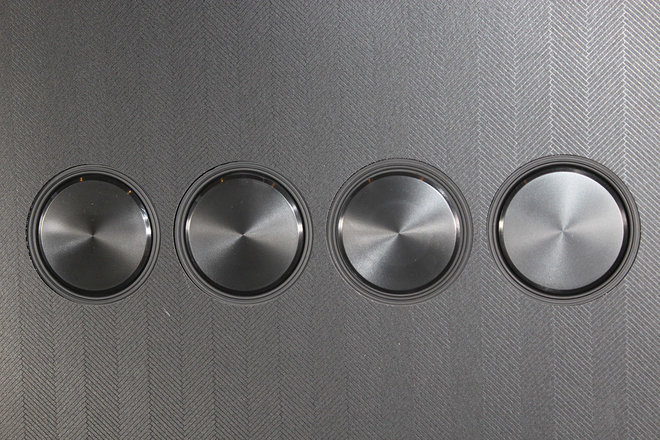 Finally there’s a multi-view mode that allows users to watch two different sources simultaneously. You can adjust the size of the two picture-in-picture screens, change their relative position, and choose which has audio priority.

The Samsung QN95B takes picture performance to the next level, with imaging that’s even better than 2021’s Samsung flagship (that’s the QN95A – if you’re wondering how A and B differ!). If you choose the Filmmaker Mode you’ll be rewarded with incredibly accurate pictures that retain the original artistic intent of the content creators.

The Mini LED backlight is composed of 40 horizontal and 18 vertical zones, giving a total of 720 independently dimmable zones. This is a slight reduction on last year’s model, although implementation of the local dimming algorithm appears to be better despite having fewer zones.

Ultimately, it’s not how many zones you’ve got but what you do with them that counts, and the QN95B delivers class-leading blacks that appear inky-deep. However, the definition just above black is also impressive, and once again an improvement over last year’s model.

The Mini LED light source is further enhanced with the addition of 14-bit HDR Mapping (which adds further detail to dark and bright scenes), whilst the Quantum Matrix Technology (which controls the Mini LEDs) is made even more accurate with Shape Adaptive Light control. 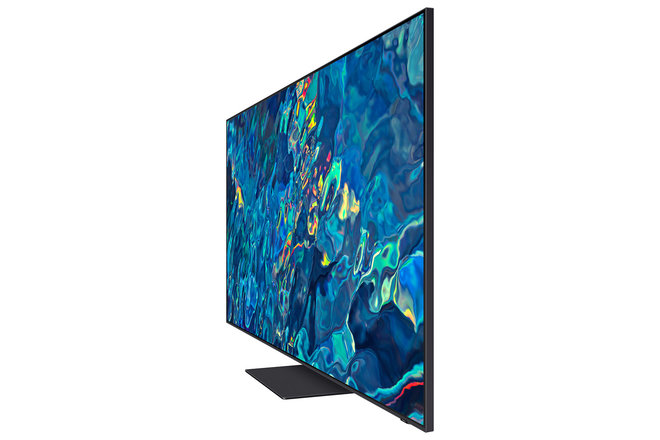 All of this picture wizardry is coordinated and enhanced by the 4K Neural Quantum Processor, which brings out all the details in an image and adds flawless upscaling. As a result, Full HD and even standard definition content can look almost as good as native 4K material.

The overall contrast is superb, and images are free of any blooming, even with very bright HDR content. The motion handling is also fantastic, and even with the Picture Clarity turned off the QN95B delivers impressive motion that appears to be a step up from last year too.

When it comes to high dynamic range the QN95B delivers some impressive measurements, hitting a peak brightness of over 2,000 nits. It also accurately covers the DCI-P3 colour space, which means most HDR content can be rendered without resorting to tone mapping. 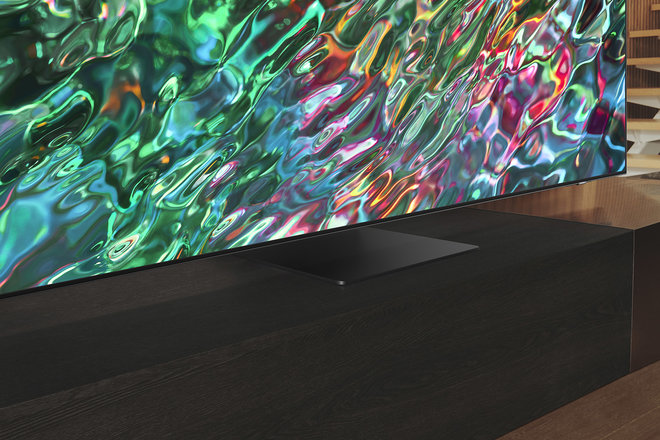 The QN95B supports high dynamic range in the form of HDR10, HLG (hybrid log-gamma), and HDR10+. Sadly Samsung still refuses to support Dolby Vision, but given the native HDR capabilities of this TV, it is debatable how much benefit the dynamic metadata format would add.

Regardless of which HDR format you’re watching, the images are simply stunning, with bright and punchy highlights, deep blacks, and vibrant colours. The level of detail in a native 4K picture will keep even the most demanding pixel-peeper happy, and any tone mapping is seamless.

The Greatest Showman is the perfect example, with its native 4K transfer delivering exceptional detail and plenty of pop. The saturated images make full use of the wider colour gamut, while the local dimming is excellent, with no obvious haloing or other unwanted artefacts. 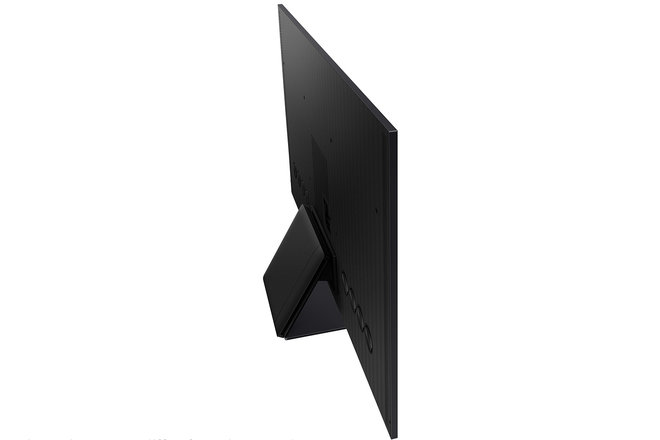 This is perfectly demonstrated by the flares and burning buildings in the nighttime village sequence in the film 1917. These look very bright against a pitch black sky, and this scene also benefited from HDR10+ dynamic metadata encoded on the 4K Blu-ray disc.

The QN95B offers a host of features aimed at next-gen gamers, including VRR for syncing the TV’s refresh rate with the console’s frame rate, thus reducing tearing. There’s also support for 4K 120Hz (and even 144Hz in some cases), plus AMD Freesync Premium Pro.

There’s ALLM for automatically detecting a console and selecting the Game mode, which results in a class-leading input lag of 9ms. There’s also Motion Xcelerator Turbo Pro tech, Game Motion Plus, and support for 21:9 and 32:9 ultra wide aspect ratios offered by a number of PC games. 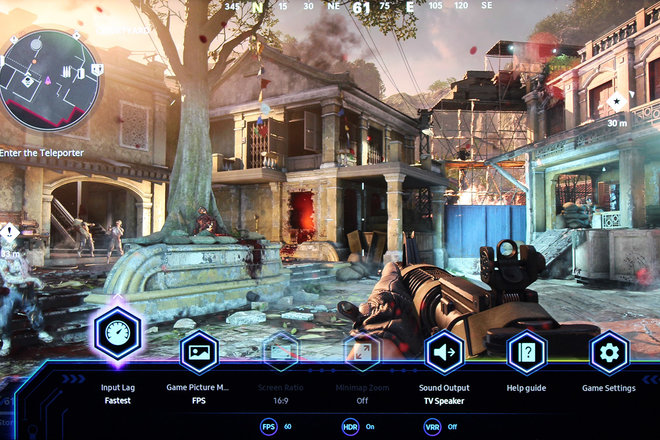 The Game Bar 2.0 hub brings all the game-related information and features together in one convenient location. It pops up automatically when a game console is detected, but can also be selected manually and includes HDR, frame rate, and VRR info, plus gaming picture adjustments.