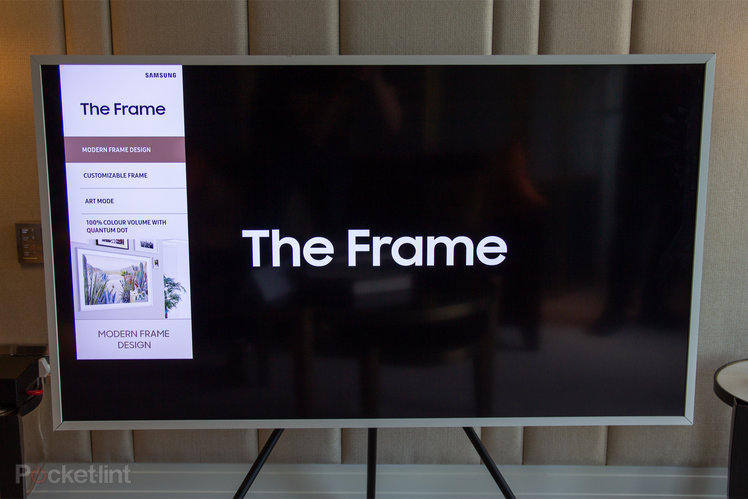 In 2017, Samsung showed off The Frame, the first step into a different family of televisions, which are now grouped under the umbrella of “lifestyle”.

It’s a collection of TVs including The Terrace, The Sero, The Serif and The Frame. Each aims to give you something slightly different, perhaps appealing to a slightly smaller market than Samsung’s mainstream TVs – but of this collection, The Frame feels like it has the most appeal.

Designed to blend in

When the concept of The Frame was first launched, it took advantage of Samsung’s slim design to allow a seamless wall mount rather like hanging a picture instead.

Indeed, the premise of The Frame remains the same, but slim TVs and practically invisible mounting is all the more common these days. What The Frame offers to separate it from other TVs is a slightly different duel LED illumination system (which we’ll talk about in a minute) and the customisable bezel. 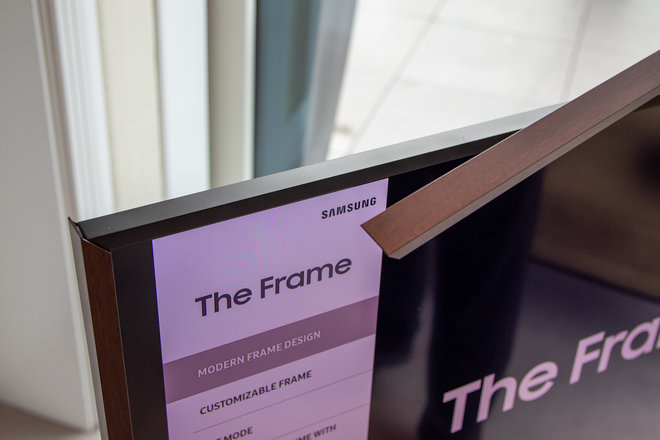 The bezel literally just connects via magnets, meaning you can switch the bezel of your TV to suit the room. It doesn’t have to be black or silver, it can be a range of different wood colours, so it can match furniture, contrast with paint colours, or whatever you want.

The changeable frames can be easily changed, they literally just pull away from the TV. There’s also a full My Shelf setup, giving you more customisation options for installation, while it also has a choice of stands, although it’s really designed for wall mounting.

The Frame comes in a full range of sizes from 32 inches all the way up to 75 inches, and its great that there are smaller sizes. This gives the potential to install The Frame in another room where you might not conventionally put a TV, so it’s a little more subtle, but still giving you access to all the latest smart features. 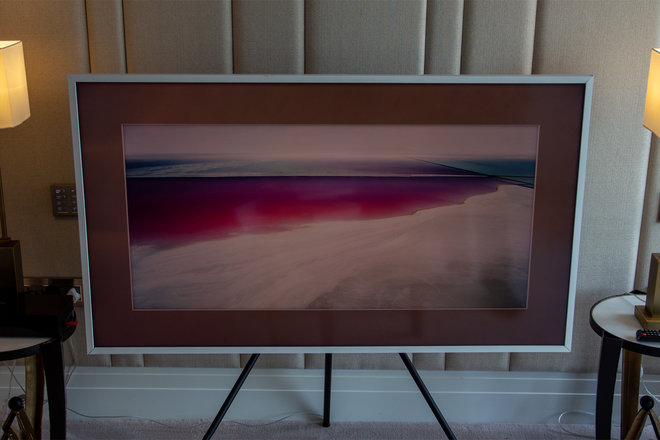 The thing to note about the 32-inch model, is that this model is a Full HD QLED, rather than 4K QLED of the larger models – it comes with a smaller OneConnect box and a shorter 2.5m One Invisible cable.

The TV itself is really just a monitor, with most of the brains are pushed over to the OneConnect box – a common feature on Samsung’s top televisions – with a single One Invisible cable running to the display itself which is pretty much invisible. Ok, so it’s not, but instead of having to worry about connecting a full array of cables to the back of the TV, it’s just one cable, making a subtle installation so much easier. 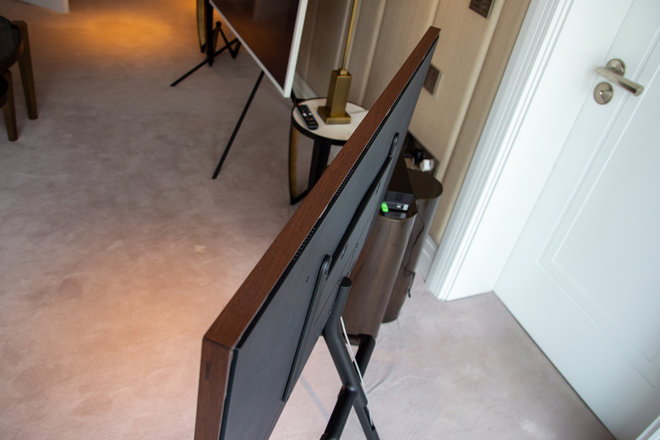 On the larger TV sizes (43-75-inch) there’s a 5m cable along with the larger OneConnect box pictured here. It is pretty, so you’ll likely need a cabinet to hide it in, but at least it helps keep the TV down to its slim 24.9mm thickness.

In terms of connections, as we’ve just mentioned these are all on the OneConnect box rather than the TV itself. The larger sizes get a full compliment of 4x HDMI including eARC, Ethernet and USB ports, so you can plug in any devices you want to play through the TV.

On top of the connections, as this is sitting on Samsung’s smart TV platform, you have access to all the streaming services through TV apps, so getting to your content is simple. It also supports AirPlay 2 and mirroring from Android devices, with Alexa and Google Assistant support too – so it’s the complete package. 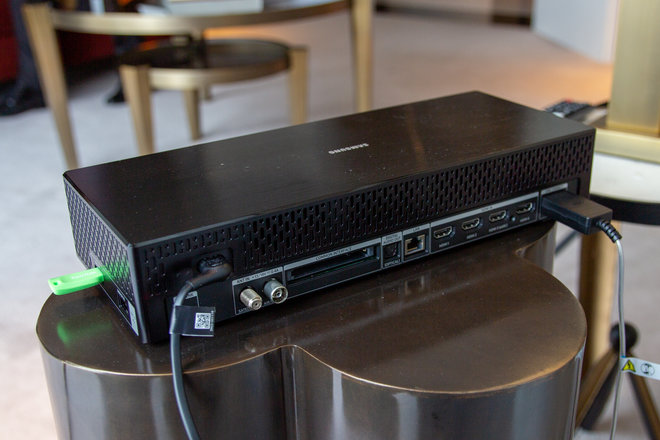 From the time we spent with the TV we didn’t get the chance to fully assess these speakers, but with the ability to connect a soundbar via the OneConnect box, it’s easy to expand the sound offering if you want more. 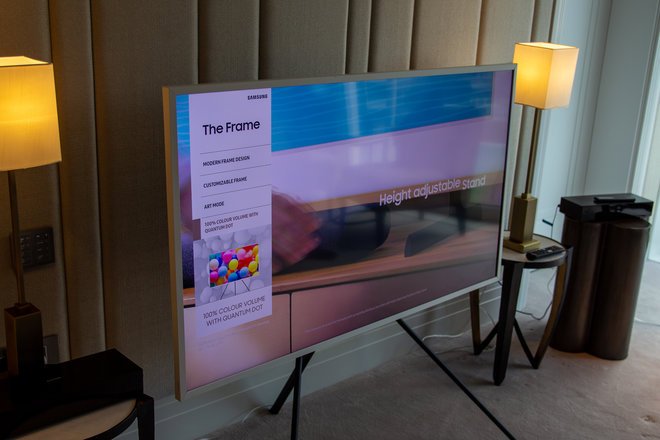 Turning to the display, it’s a QLED panel, again with the smaller model offering full HD resolution, but stepping up to 4K at 43 inches. It supports HDR10+, but there’s no Dolby Vision support.

The Dual LED technology is designed to give you a best of both worlds situation. It has the power to deliver a vibrant and engrossing image when you’re using The Frame to watch TV, but it will switch illumination when you move over to Art Mode. 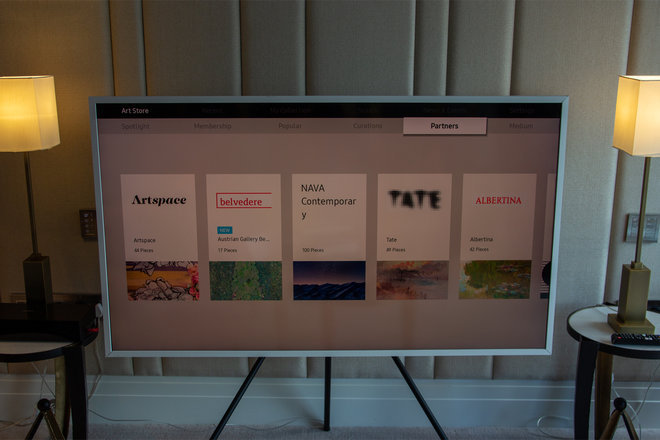 This is the thing that really stands this TV aside from others, in that it’s designed to showcase art when you’re not using it as a television. You can use your own images, but there’s also a range of free or subscription sources available through the TV so you can choose something to suit your taste.

With the switch in illumination, and an adaptive system to suit the ambient light in the room, the effect is really good. You could be forgiven for thinking that it’s artwork on the wall rather than a TV in disguise – it’s really effective.

Of course you don’t want your TV on all the time, so there’s a motion sensor that will detect when there’s no one there and it can turn off.