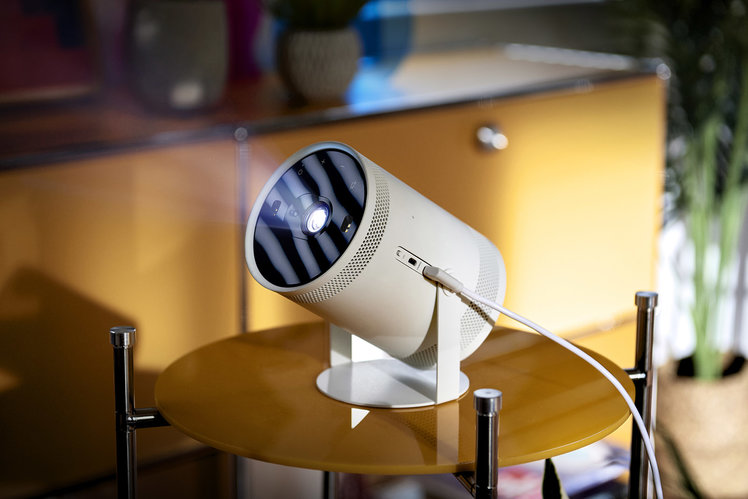 While Samsung is a giant when it comes to TVs, the Korean manufacturer probably isn’t the first name that springs to mind when considering a projector. This has changed in recent years, with Samsung entering the ultra-short-throw projector market with the impressive Premiere, and now the company hopes to achieve similar success in the pico projector market with The Freestyle.

What is a pico projector? It’s basically a small, hand-held projector that normally uses an LED light source. This type of projector can be quickly and easily setup, allowing images to be projected onto a wall or other convenient surface.

The Freestyle combines these key features with a built-in sound system and smart platform, allowing you to enjoy your favourite shows anywhere, while Smart Calibration can counter off-white surfaces for on-point colours too. But just how good is it?

The Samsung Freestyle certainly looks prettier than the average pico projector, with an attractive and aesthetically pleasing design that uses a compact form factor, making it highly portable and easy to accommodate in any environment.

The tube-shaped chassis is finished in matte white, and although lightweight, it’s also solidly constructed. This makes it easy to pick up and handle, while also being robust enough to be moved between different rooms and locations.

There is a 360-degree speaker built into the front of the chassis behind a holed array, along with a heat sink, invisible fan, and spiral air duct for cooling with minimal noise. On one side is a switch for activating the built-in microphone, a USB-C port for power, and a Micro-HDMI port for external devices.

The projector sits on a moveable cradle that not only provides stable support, but also allows the projector to be quickly and easily installed in any orientation from 90 to 180 degrees.

The Samsung Freestyle has a basic set of connections, but they should be sufficient to watch the majority of content. There’s a Micro-HDMI input for connecting external devices, and this supports version 1.4 features such as CEC, but can also handle HDR and eARC.

There’s also a USB-C port, although this is exclusively for the included USB power adapter. The proximity of the Micro-HDMI input to the USB-C port means there’s limited space, so when connecting an external device it’s best to use an HDMI to Micro-HDMI cable.

In terms of wireless connectivity there’s Wi-Fi 5 and Wi-Fi Direct, plus Bluetooth 5.2 and support for Apple AirPlay 2. This Wi-Fi connectivity supports the projector’s Tizen-powered smart platform, which includes streaming apps.

The projector supports the SmartThings app for Android and iOS, too, and this not only provides the same control options as the included remote, but also adds voice interaction via Bixby and Amazon Alexa using a built-in far-field microphone. 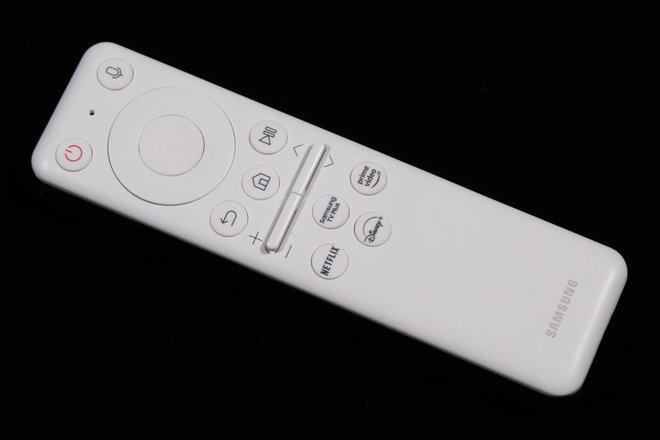 The included remote control is finished in white to match the projector, and uses an ergonomic design that makes it comfortable to hold, combined with an intuitive and simplified button layout that makes it easy to setup and control the projector.

The Samsung Freestyle is designed to be both portable and easy to setup, and it certainly achieves this goal thanks to automatic keystoning, levelling and focusing. You simply point the projector at the surface you want to project onto and The Freestyle does the rest. This generally works well, although there is the option to manually adjust the keystoning and focus if necessary 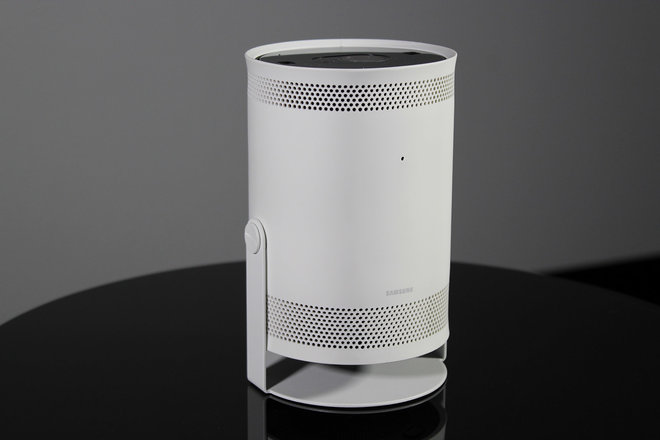 You can project at any angle, including upwards if you want a picture on the ceiling, and the size of the image is increased or decreased by simply moving the projector nearer or farther from the surface it’s projecting onto – creating an image between 30 and 100 inches diagonally. You can also scale and move the image internally if physically installing the projector is restricted.

The projector supports the SmartThings app, and there were no issues running the app and connecting with The Freestyle. It also made setting up this projector even easier, with the app taking you through the process and connecting to your wireless network with ease.

The Freestyle works well in operation and is generally very quiet. Samsung claims a noise level of 30dB, but we only measured it at 25dB from two feet away. The Freestyle is easy to operate, with a home page and menu system that’s intuitive to navigate. As a result you can quickly make adjustments in the menus or choose from the available streaming apps.

The Tizen-powered smart platform offers a number of key streaming services like Netflix, Amazon Prime and Disney+. The homepage is sensibly laid out, and all the features appear to work without any issues. There are also other smart features such as Samsung TV Plus, Samsung Health, Samsung Calm, and even a web browser.

In terms of other features there’s screen mirroring from a smartphone using either the SmartThings app or AirPlay 2, and if you have a supporting Samsung Galaxy phone there’s also Tap View. Compatible Samsung TVs offer TV Access, allowing users to stream live TV broadcasts to The Freestyle in another room via Wi-Fi. When the TV is on you can mirror content to the projector, when the TV is off you can control the TV content from the projector.

While the ambient mode allows you to project from a choice of 20 images or your own photos, thus jazzing up a room, the mood lighting option is a bit silly in our view. The idea of attaching the lens cap and turning an LED projector costing nearly a grand into a lamp seems a bit out-there, when you could just buy a lamp for a fraction of the cost. 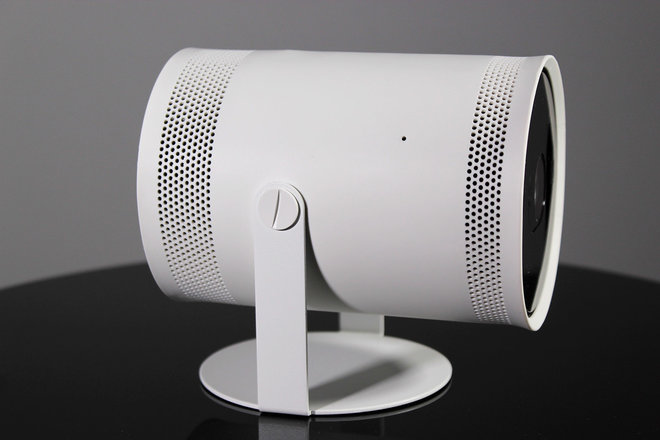 The Freestyle is compatible with external batteries that are USB-PD and 50W/20V output or above, although Samsung also offers an optional battery stand. There’s even an optional carry case, and skins for changing The Freestyle’s colour to match your decor.

The Samsung Freestyle uses single-chip DLP (digital light processing) with a Full HD resolution (1920 x 1080) and an LED light source. This has a claimed brightness of 550 lumens and a lifespan up to 20,000 hours. It also has better consistency over that lifespan, and won’t dim like a bulb. 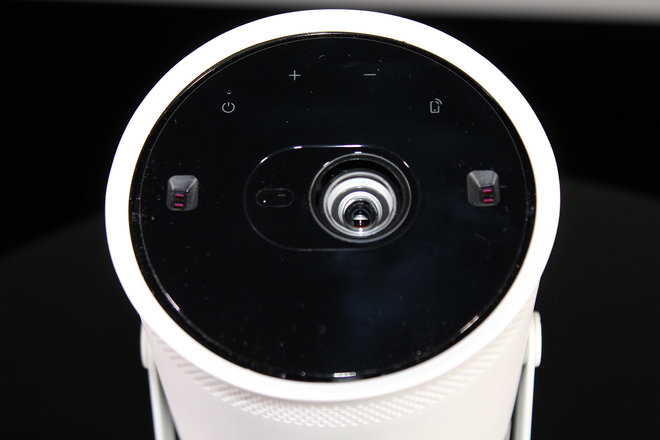 In general the picture quality is very good, with images that appear clean and detailed. The Freestyle is reasonably bright, but like any projector it will struggle in daylight. So to get the most out of its big images we suggest pulling the curtains or using it at night.

The Movie mode delivers the most accurate images out of the box, while the motion handling is excellent thanks to the use of DLP. However, The Freestyle also suffers from the usual limitations of DLP, with weak blacks and contrast, plus possible colour fringing (rainbows) for certain viewers.

Samsung’s new Smart Calibration feature enables The Freestyle to be quickly and easily calibrated with a supporting smartphone. Just follow the instructions and the feature will measure accurate images in a matter of seconds, making it very useful when projecting on to off-white walls, However, claims this feature can produce accurate pictures with coloured walls are highly optimistic. 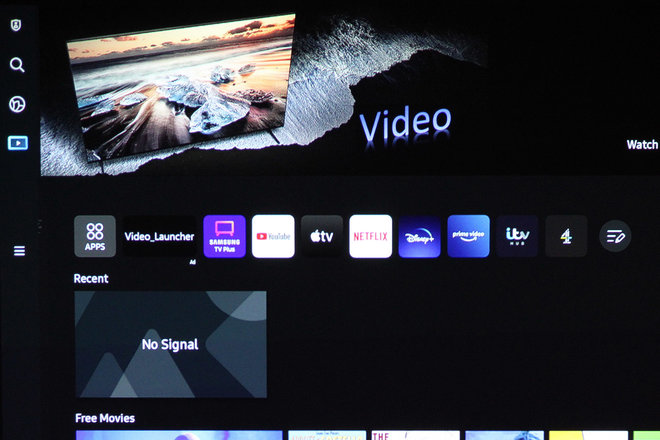 The Freestyle supports HDR10 and HLG high dynamic range formats, although there are a few caveats. Firstly, since the projector is limited to Full HD it obviously doesn’t support a native 4K (3840 x 2160) resolution, so content must be downscaled. Thankfully this appears to be done well, with no apparent artefacts to the image.

Secondly, any projector will struggle with HDR when it comes to brightness, meaning specular highlights are limited and the colour space doesn’t cover the full DCI-P3 colour gamut. However the tone mapping on The Freestyle is good, allowing users to benefit from HDR to some degree.

The Freestyle supports HDR and HLG via its internal apps (where appropriate), and it can support HDR10 via HDMI as long as the connected device is able to output HDR10 to a display that doesn’t support 4K. Watching HDR content does reveal images that appear to have a bit more punch compared to standard dynamic rangfe images, but the difference is minimal. 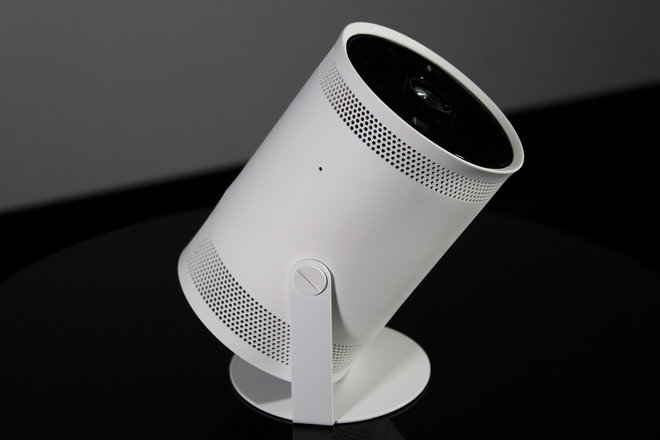 You can connect a gaming console to The Freestyle using the Micro-HDMI input, and while the projector doesn’t support most next-gen gaming features, it does have a game mode with an input lag of 44ms. This may be too high for serious gamers, but the lag will be fine for most people, allowing the Samsung to offer users a quick, easy and enjoyable gaming experience on an XL scale.

The Samsung Freestyle has its own built-in speaker system, which actually sounds surprisingly good considering its compact size. This is largely thanks to 5W of amplification, a 360-degree speaker configuration and two passive woofers. The speaker uses a compact low vibration installation that cancels out opposing forces, and as a result the projector sounds much bigger than it looks. 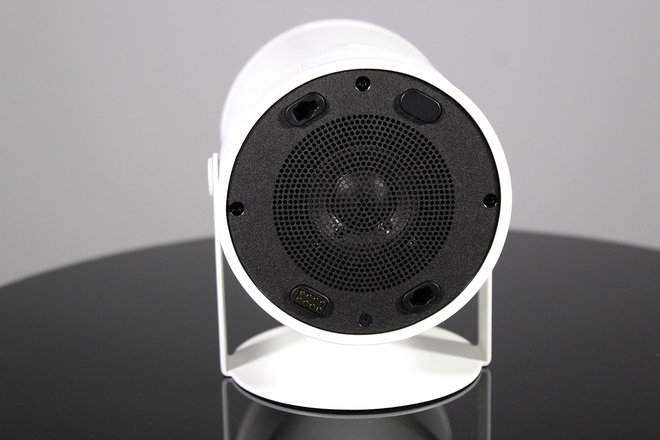 The audio spreads out from The Freestyle in all directions, so it can go loud without distorting or losing coherence. It’s never going to compete with a soundbar or similar outboard sound system, but for catching up on your favourite show it’s more than capable. The inclusion of HDMI-ARC means you can even send the audio from the built-in apps back to an external sound system.