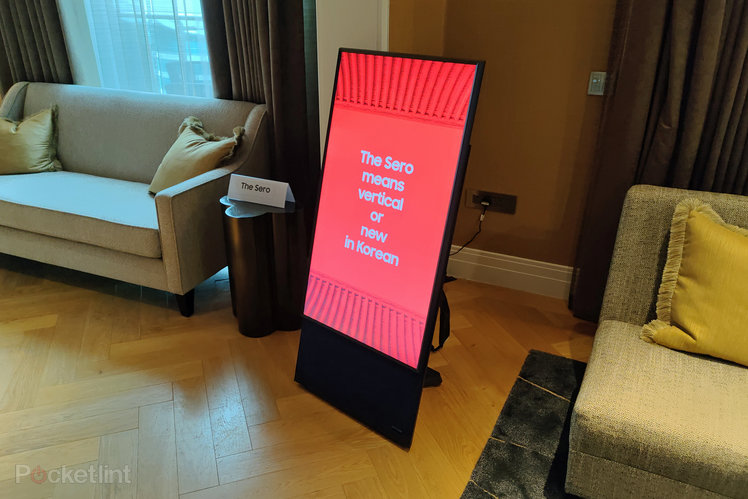 On top of a popular line-up of “normal” televisions, Samsung has another set of TVs it refers to as “lifestyle”.

They’re easy to spot because they have names that begin with The, rather than being a collection of letters and numbers – The Terrace, The Serif or The Frame for example.

The Sero is perhaps the most dramatic of these TVs, because it will rotate to give you vertical video, if that’s what you want.

The Sero was first announced in 2020 but continues its march in 2021. When we first saw The Sero it was hard to see it as anything other than a kneejerk reaction to social media and the fact that a lot of people are pushing out video on social platforms that are vertical.

Our initial response was that that was for fine for phones, but had little place on an actual television. But once you’ve seen The Sero and experienced it, that sort of harder stance might soften, or indeed, feel a little outdated. 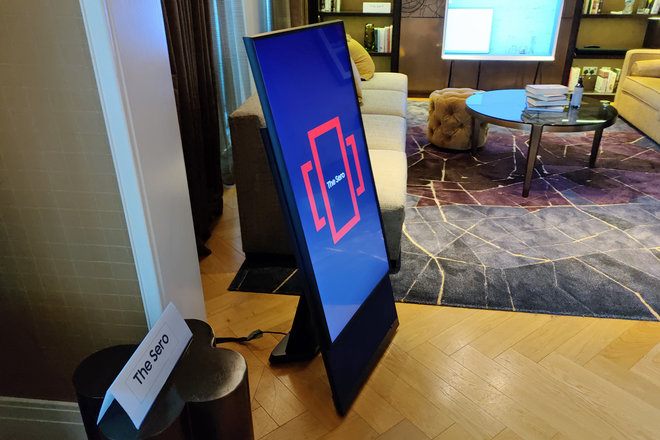 The Sero has a 43-inch 4K QLED panel that can rotate. To facilitate this, it’s set on a stand like a easel, leaning back. You can’t take it off, you can’t mount this on your wall, it stands on the floor. The stand is a dark blue, with fabric covering the bottom half where the speakers are.

You can, however, fit casters to the bottom of the stand so you can wheel it around and change its location in whatever room it is in, a nod to rather more unconventional watching than a normal television. At the same time, this screen is always leaning back at an angle, so that might make lower seating slightly less optimal when watching regular TV.

The rotation of the TV is pretty quick, but not so fast that it will whack someone round the side of the head as it moves. In all likelihood, you’ll be watching one type of content or the other, not constantly switching. That might be devouring Instagram Reels vertically, before deciding to watch the latest Marvel movie, rotating the screen and settling back to enjoy the action.

The stand also contains a 4.1 speaker setup, offering 60W of sound, a considerable lift over most televisions and again, a nod to the type of customer who might be interested in this entertainment piece as an all-on-one package.

To think of it as a replacement for a TV you have mounted on the wall might be a mistake, but if you have an empty room, you can see how choosing The Sero gives you a lot of versatility, once you throw off the notion of having a TV you watch, and a TV stand with all your devices to connect to it.

The Sero does have a full set of connections, including a tuner and 3x HDMI, with eARC, but it’s the wireless connectivity that’s likely to be more commonly used on this TV. That includes smartphone mirroring, so you can have the display of your phone on the TV – which is where the magic of having a vertical display is going to come to the fore.

While Android display mirroring is pretty easy – and we’d expect seamless interaction with Samsung smartphones – it also supports AirPlay 2 for Apple devices, meaning there’s lots of ways to get content off your phone and onto your TV. 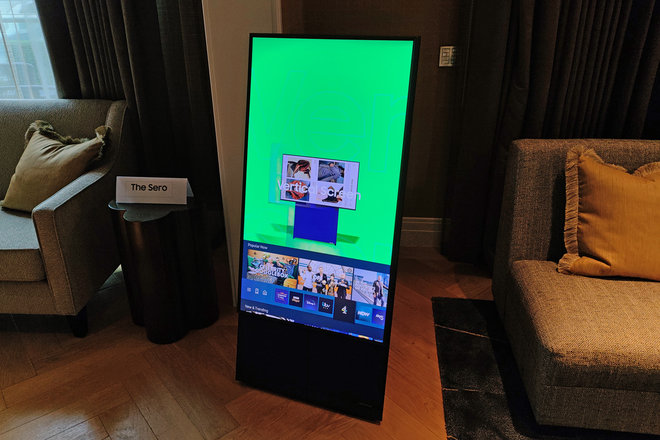 In the viewing that we had of The Sero we didn’t have the chance to test all these methods out in a real world context, so we can’t comment on how well they work, but Samsung tells us than when you’re mirroring, you can rotate your phone to get the correct aspect for the content and the TV will follow.

Whether you’ll use the physical connections will very much come down to how you want to set your TV up. With so many people streaming everything they watch, it might fall to Samsung’s smart platform to provide the entertainment rather than a traditional aerial.

If you plan to site the TV in one position then you could hookup your Xbox or other devices as normal, but if you’re using those wheels, that might just get in the way of your mobile TV ambitions. 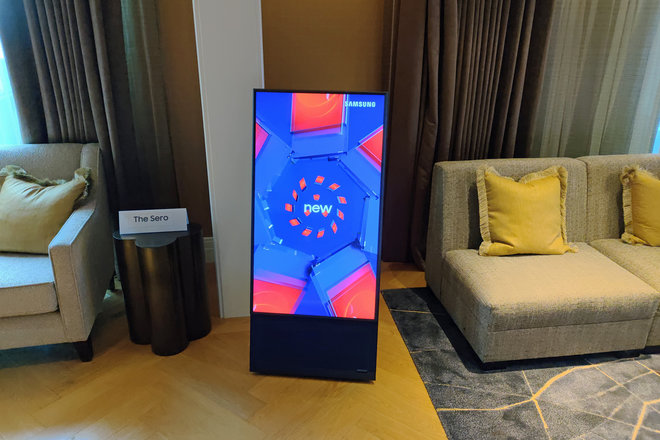 There’s only one size for The Sero and that’s 43-inches, which is pretty small by TV standards, but that also sees the price as not extortionately high. Indeed, it’s a typical price for a high-end TV, with added personality that you won’t get elsewhere.

Sitting at the heart of everything is a good Samsung QLED display, supporting 4K resolutions and with support for HDR, so everything will look great.