After launching the industry’s first 0.64μm mobile image sensor, the ISOCELL JN1, in June, Samsung has now unveiled the first 200MP camera sensor for smartphones. The new Samsung ISOCELL HP1 is also based on Samsung’s 0.64μm-sized pixels, and it offers ultra-high resolution in a small package.

The Samsung ISOCELL HP1 promises ultimate low-light performance, thanks to the all-new ChameleonCell pixel-binning technology. This allows the sensor to use a two-by-two, four-by-four, or full pixel layout depending on the environment. In low-lighting conditions, the ISOCELL HP1 can merge 16 neighboring pixels into one large 2.56μm pixel, offering an effective resolution of 12.5MP. The larger pixels help the sensor capture more light and produce brighter photos. 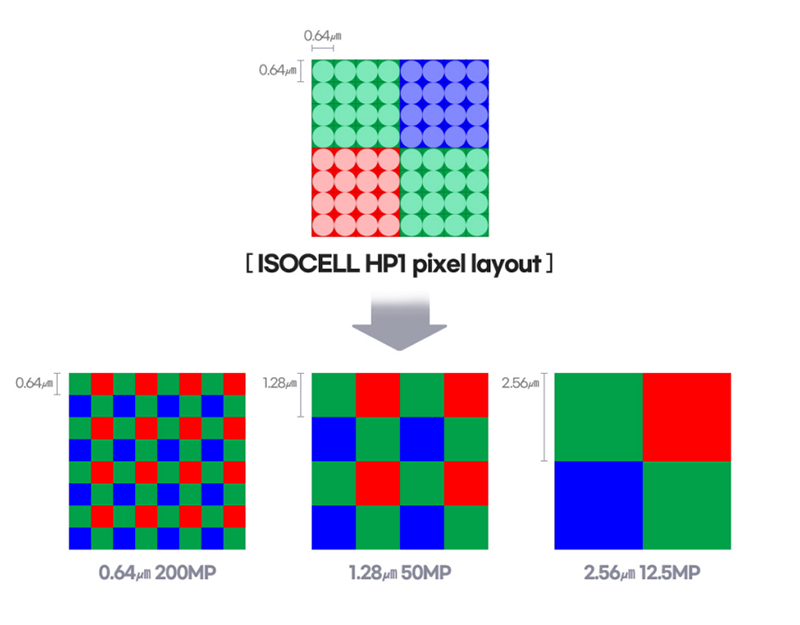 As far as video capabilities are concerned, the ISOCELL HP1 can capture 8K video at 30fps with minimum loss in the field of view. The sensor merges four neighboring pixels to bring down the effective resolution to 50MP, allowing for 8K video capture without any need to crop or scale down the full image resolution.

Along with the ISOCELL HP1, Samsung has also announced the ISOCELL GN5. It’s the industry’s first 1.0μm sensor to integrate Dual Pixel Pro — an all-directional autofocusing technology. According to Samsung, this technology “places two photodiodes, the smallest in the industry, within each 1.0μm pixel of the sensor either horizontally or vertically to recognize pattern changes in all directions. With one million phase-detecting multi-directional photodiodes covering all areas of the sensor, the ISOCELL GN5’s autofocusing becomes instantaneous, enabling sharper images in either bright or low-lit environments.”

The ISOCELL GN5 also uses Samsung’s proprietary pixel technology that applies Front Deep Trench Isolation (FDTI) on a Dual Pixel product for the first time in the industry. This technology allows each photodiode to absorb and hold more light information, improving its full-well capacity (FWC) and decreasing crosstalk within the pixel.

Currently, Samsung hasn’t shared any information on when we can expect to see these new sensors on smartphones. The company may offer the ISOCELL HP1 on its upcoming flagship Galaxy S22 lineup, but we don’t have any concrete evidence pointing towards that right now. We’ll make sure to let you know as soon as we learn more.