Seagate is introducing new flagships in their IronWolf lineup today on two fronts – the SMB/SME-focused IronWolf Pro, and the SATA SSDs line. On the HDD front, we have 18TB hard drives based on conventional magnetic recording (CMR) technology, while the SATA SSD line sees two new SKU sets – the IronWolf 125 and the IronWolf Pro 125 (joining the current IronWolf 110 and the NVMe-based IronWolf 510).

Given the premium nature of the 18TB capacity point, Seagate is launching the capacity only in the IronWolf Pro line (the vanilla IronWolf models top out at 16TB). The ST18000NE000 18TB Pro model is compatible with NAS units of up to 24 bays, and has a workload rating of 300TB/yr. It is a 7200 rpm 9-platter helium-filled drive, with a DRAM cache of 256MB (which seems to be half of what is offered by Western Digital in their Gold line of enterprise hard drives – the other 18TB choice in the retail market). The drive comes with a 5-year warranty and is rated for 24×7 operation, with a MTTF of 1.2M hours. 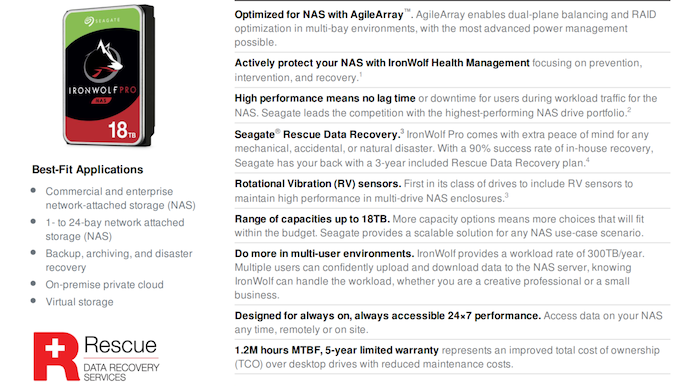 The average power consumption sees an increase from 7.6W for the 16TB model to 8W for the 18TB version. The drive does use TDMR technology for the heads, and we have reached out to Seagate for information on possible HAMR usage (Update: HAMR is NOT used in the IronWolf Pro 18TB).

The new SATA SSDs are 2.5″ drives with different optimizations for varying use-cases. The IronWolf 125 is meant as a capacity play – available in capacities ranging from 250GB all the way to 4TB. It comes with a 0.7DWPD rating, and no power-loss protection. On the other hand, the IronWolf Pro 125 has a 1DWPD rating, more over-provisioning (rated capacities range from 240GB to 3.84TB), and comes with power-loss protection. The Pro drives come with a 2M hour MTTF, while the corresponding metric is 1.8M hours for the non-Pro version. Both drives come with a 5-year warranty, with the Pro series including a 3-year data recovery service.

The new IronWolf Pro 18TB HDD is priced at $609 (compared to $593 for the equivalent WD Gold drive). Pricing for the different models in the IronWolf (Pro) 125 SSD series is available in the tables above. The main competition here is Western Digital’s WD Red SA500 series. Seagate does more product segmentation / firmware tweaking for the NAS SSD market, allowing consumers to choose a SSD tuned for their requirements.