Japan’s Sharp Corporation is a century-old brand known worldwide for many electronic products, particularly televisions. And while the firm also makes smartphones, it would not be an overstatement to say they are niche products, catering to collectors and enthusiasts rather than the mainstream. After all, Sharp smartphones are sold only in Japan, and even in its home country, they account for 1.77% market share as recently as May 2022 according to results from multiple research firms.

But in the Android space, in which mainstream releases are all becoming very good and similar, niche often means interesting. Sharp has, in fact, a history of pumping out very interesting phones with a lot of industry firsts, but the phones’ near non-existent international marketing and presence means they are often overlooked.

The same fate will likely befall the Sharp Aquos R7, a phone which comes packed with the same camera hardware that was garnering Xiaomi plenty of tech headlines the past few weeks. 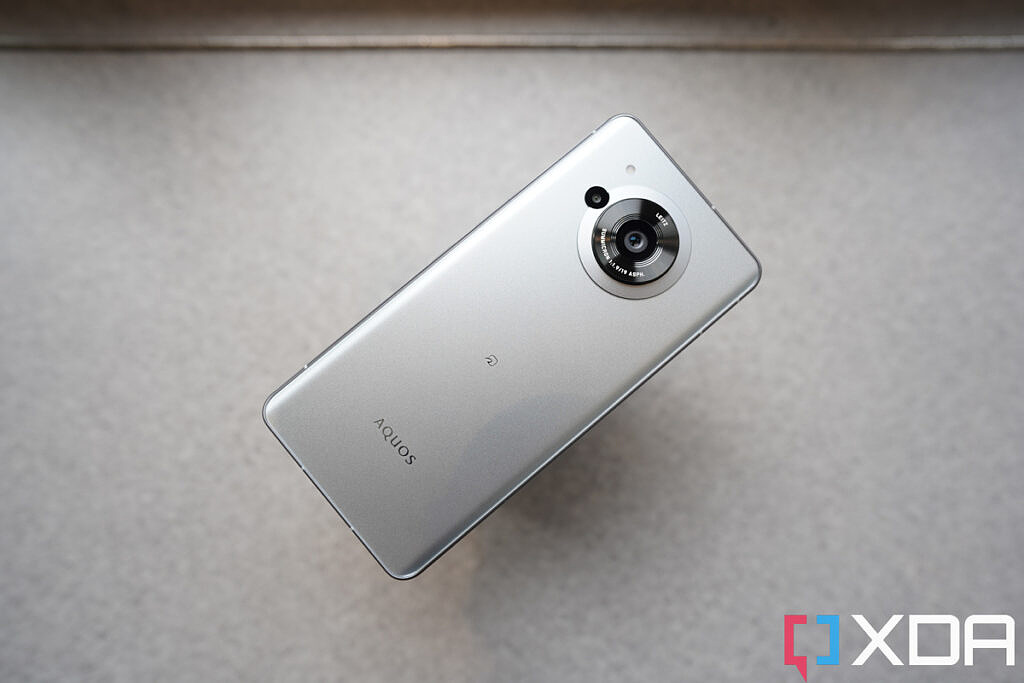 The Sharp Aquos R7 is available now but only in Japan. You can buy it straight up for ¥189,360, which converts to around $1400. Thanks to reporting by my colleague Timi Cantisano, we know that carriers in Japan are offering a 48-month installment plan.

The phone is available to import. I was able to get my hands on a unit thanks to Hong Kong importer Trinity Electronics. Considering how pricey the phone’s official retail price is, you’d have to expect to pay north of $1700 to get your hands on one. So … yeah, this is a niche phone. 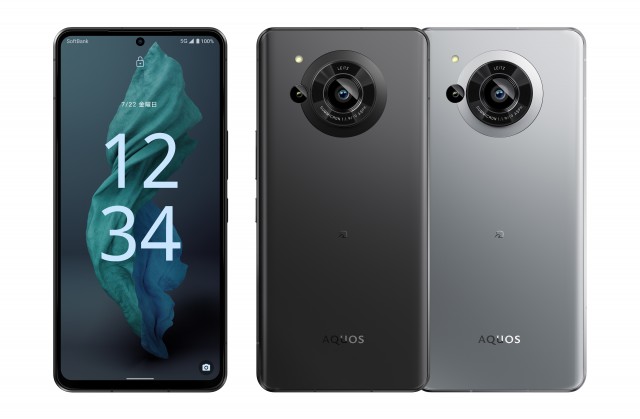 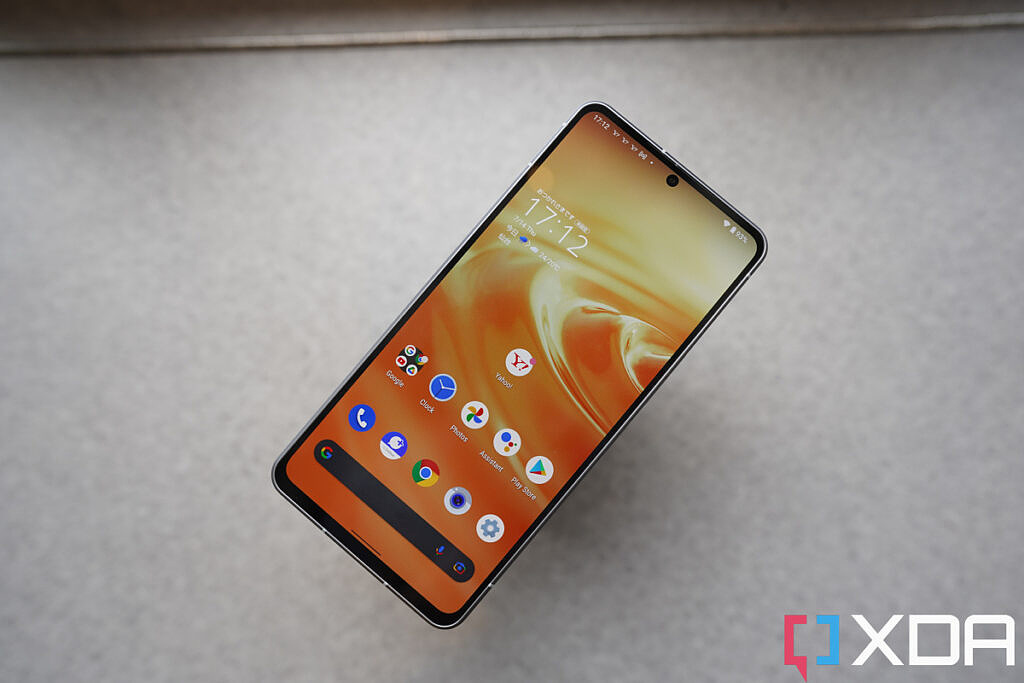 The biggest selling point of the Sharp Aquos R7, in my opinion, is its main camera: a 1-inch Sony sensor with Leica optics. Does this sound familiar? These are the same selling points of the Xiaomi 12S Ultra camera, which has been garnering praises in the tech media space, including yours truly.

Sharp’s camera, in fact, uses the exact same Sony IMX989 sensor — which Xiaomi said it co-developed with Sony, splitting the $15 million R&D bill. The fact that Sharp is also using this same camera should be more newsworthy, but as my colleague Timi Cantisano wrote last month, Sharp has a history of letting other brands take the shine for hardware innovations.

The cameras being so special deserves its own section, which we’ll get to in a bit. The rest of the phone is an odd mix of familiar and new. The 6.67-inch, 2,730 x 1,260 OLED panel uses Sharp’s IGZO (Indium, gallium, zinc, oxide) technology, which means the screen is layered with ultra thin-film transistors that offer lower power leakage. It also refreshes at a maximum of 240Hz. Yup — twice that of any modern Android flagship. 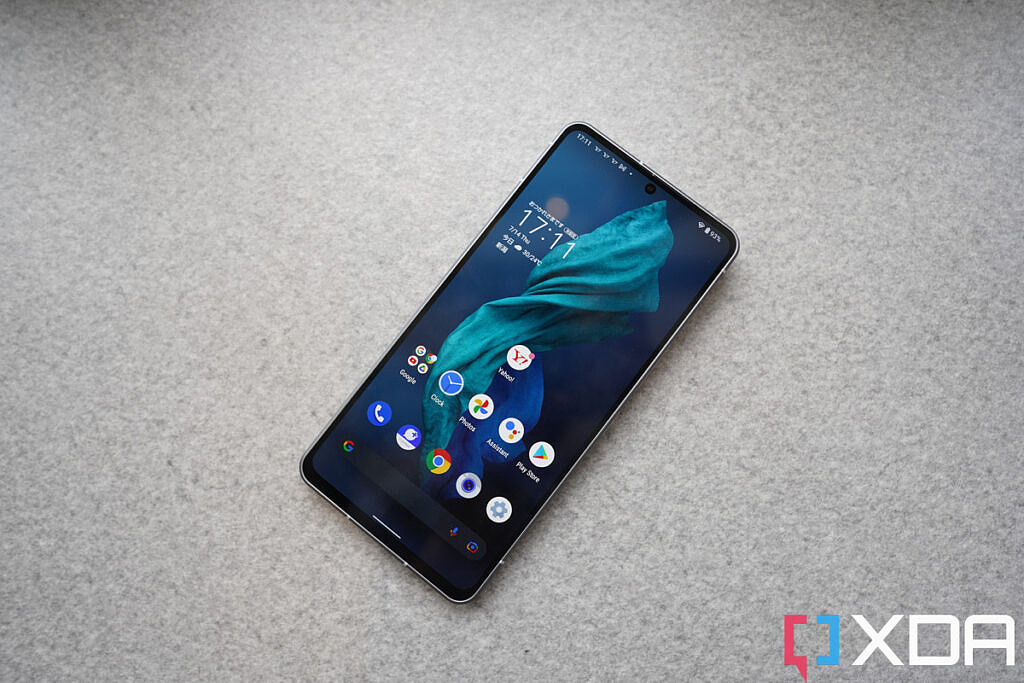 The screen definitely looks great, and animations are very fast and smooth, but I’d be lying if I said I noticed any area of superiority over a “typical” 120Hz OLED panel in a top Android device like the Galaxy S22 Ultra or OnePlus 10 Pro. In fact, Sharp’s panel doesn’t seem to get as bright to my eyes as the Galaxy S22 Ultra’s even though Sharp advertises a 2,000 nits “peak max brightness.” There’s also a bit of thin bezel that’s thicker than other 2022 Android flagships.

But the screen is entirely flat, which a lot of readers may like, and underneath it is Qualcomm’s 3D Sonic Max scanner, which is quite a bit of an upgrade over traditional optical in-display scanners or even just a typical Qualcomm ultra-sonic scanner (like the one used in the Galaxy S22 series). The scanning area is larger, allowing for the option of two-finger authentication, and it also scans a beat faster than other scanners.

A single piece of aluminum casing makes up the phone’s sides and back, and it’s a nice throwback to the smartphones of 2015 or so, before virtually every high-end phone went with a glass body. 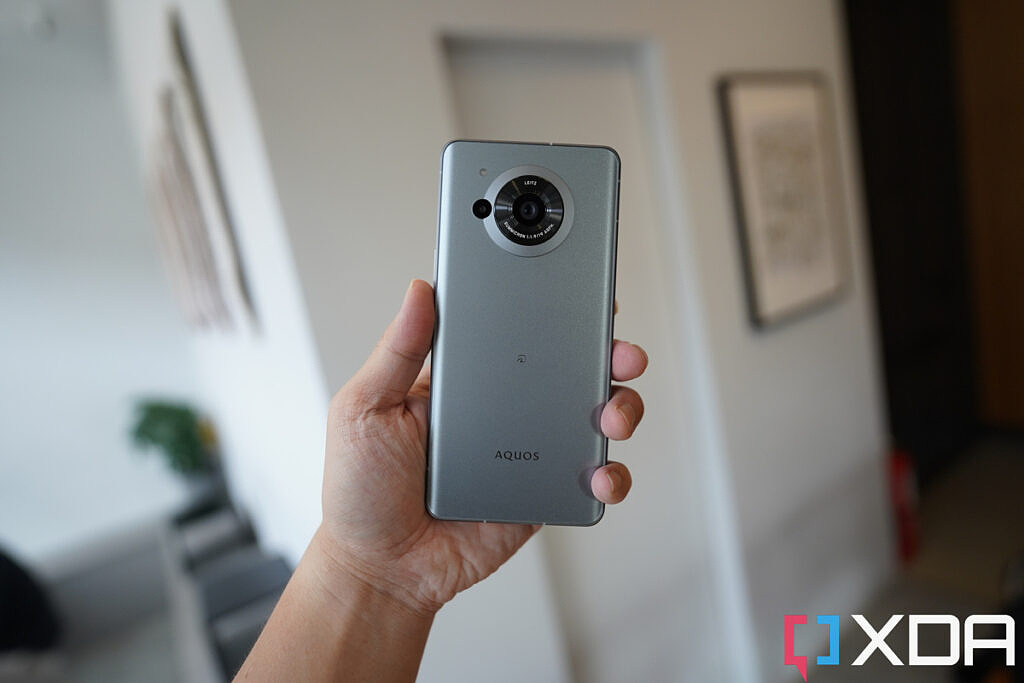 The sides of the phone are wide and flat, but unlike a recent iPhone, the corners aren’t sharp thanks to chamfered edges. It’s a comfortable phone to hold, with the 208g weight evenly distributed. Sharp’s tendency to zig where others zag is also apparent at the top, where the SIM tray is located, plus a headphone jack. 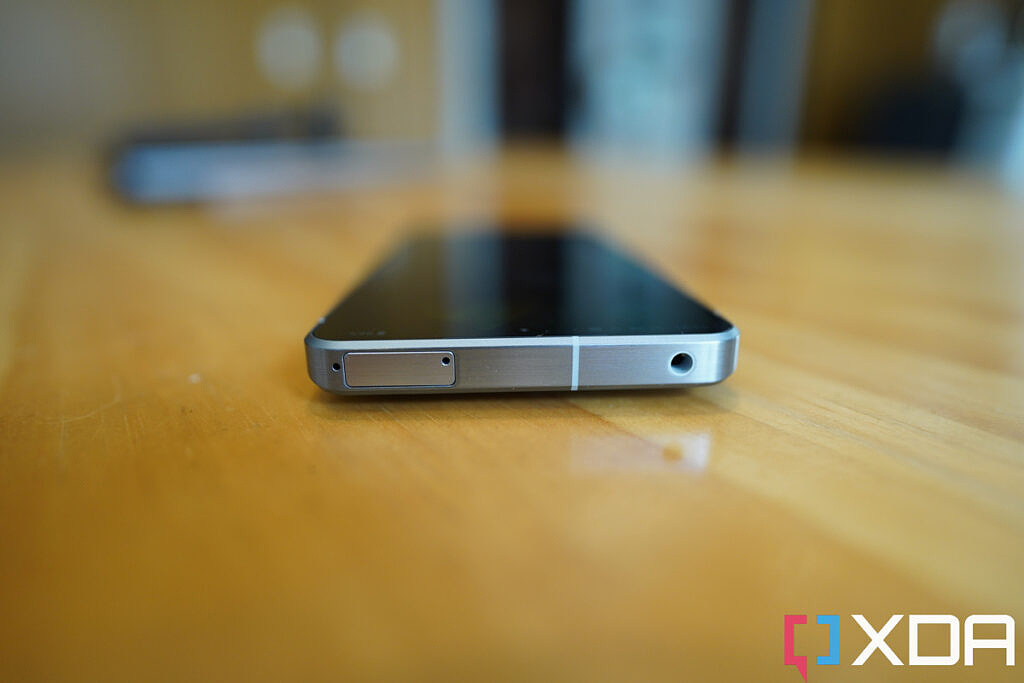 Inside the phone is a Snapdragon 8 Gen 1 (not the newer 8 Plus), and it comes with 12GB of RAM and 256GB of UFS 3.1 storage (there are no other memory configurations). 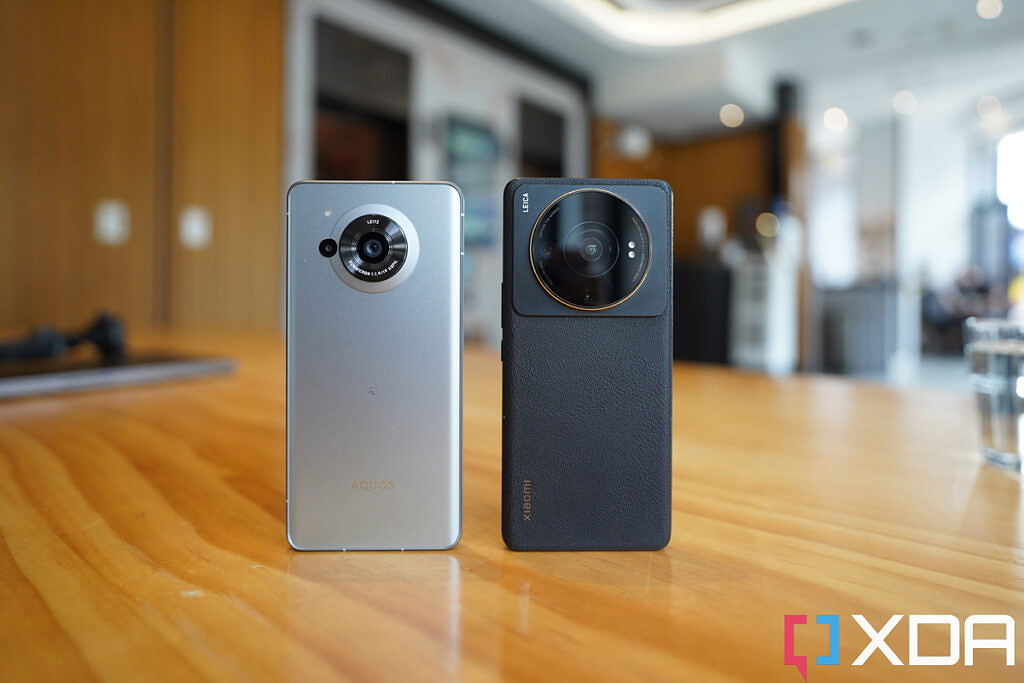 Let’s get to the cameras. The Sharp Aquos R7 has one camera on each side of the phone: the aforementioned 1-inch main camera, and a 12MP front-facing selfie camera. The omission of a secondary lens for ultra-wide or zoom photography is very unusual for a flagship, but I think by now we know Sharp phones are unconventional products. (That smaller lens you to the left of the module is merely a 1.9MP depth sensor that doesn’t really count as a real camera.

Although the Sharp Aquos R7 uses the same IMX989 sensor, Sharp actually crops into the sensor to use a smaller lens format, (thus this is why Xiaomi was still able to claim its phone to be the “world’s first”), and Xiaomi’s main camera has an extra layer lens (eight layers) to the Sharp’s 7P lens. Both of these lenses were designed by Leica (apparently), but Xiaomi’s lenses are newer and developed specifically for the Xiaomi 12S Ultra.

So there are some hardware differences, and of course, software processing is perhaps even more important than hardware these days.

I’ve snapped over 60 photos with the Sharp Aquos R7 alongside the Xiaomi 12S Ultra, and I can say that, when things go right for Sharp, its camera often exhibits all the awesome strengths of the Xiaomi 12S Ultra main camera: creamy bokeh, excellent light intake ability, and contrasty shots with deeper shadows for that Leica look. 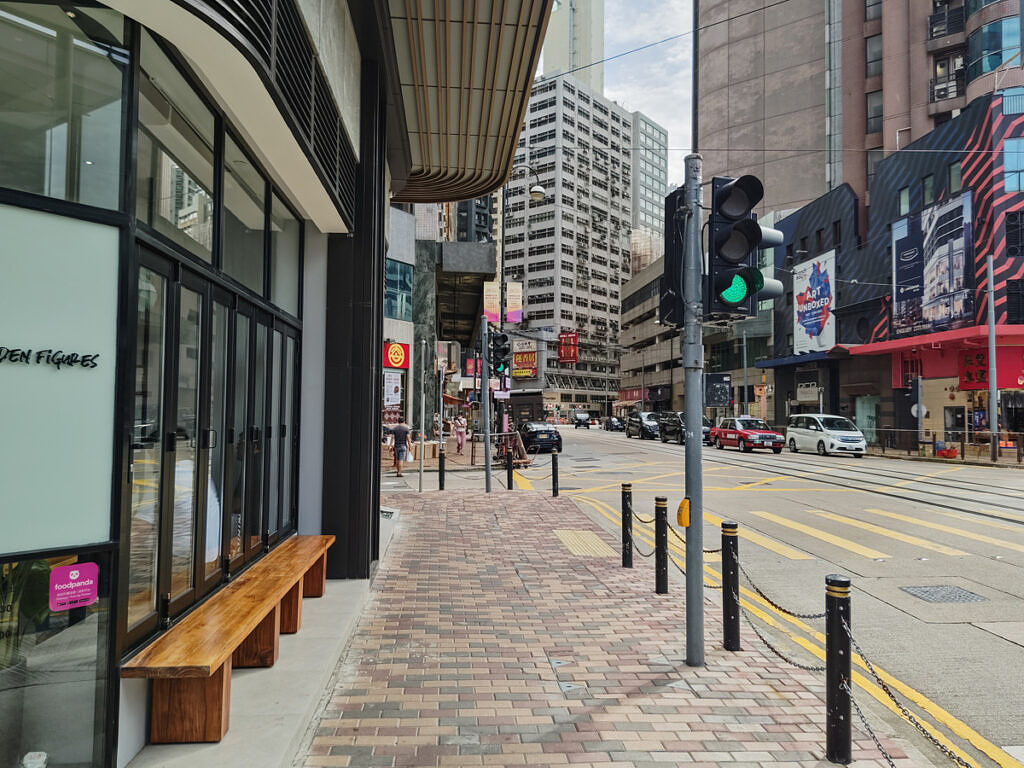 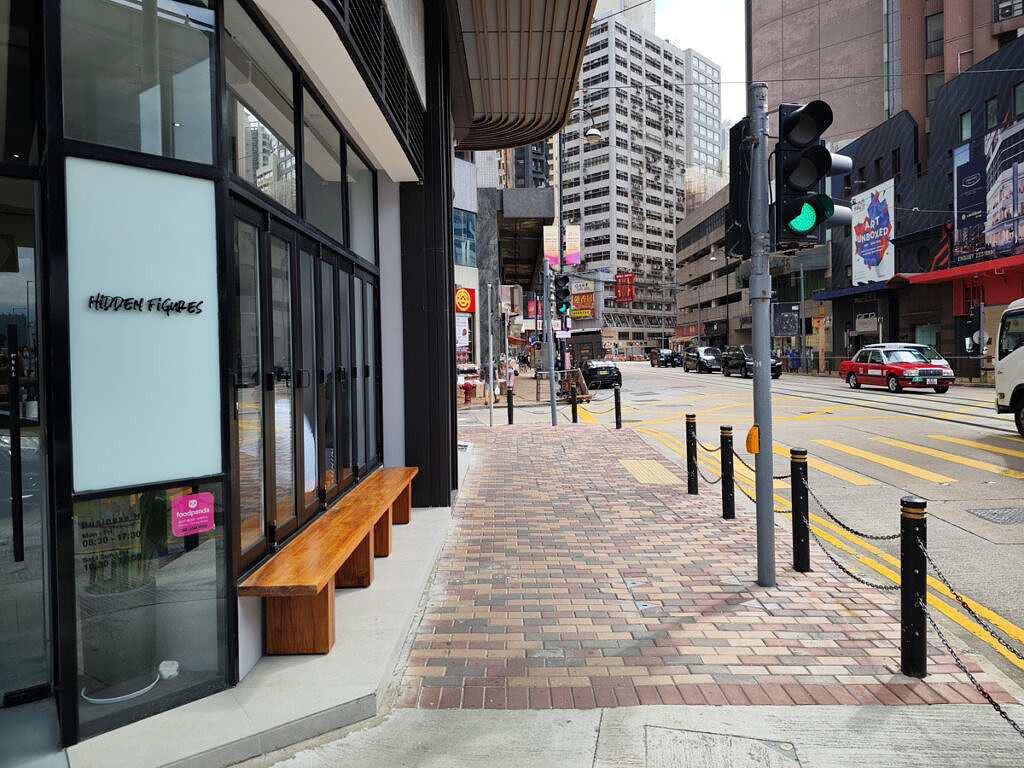 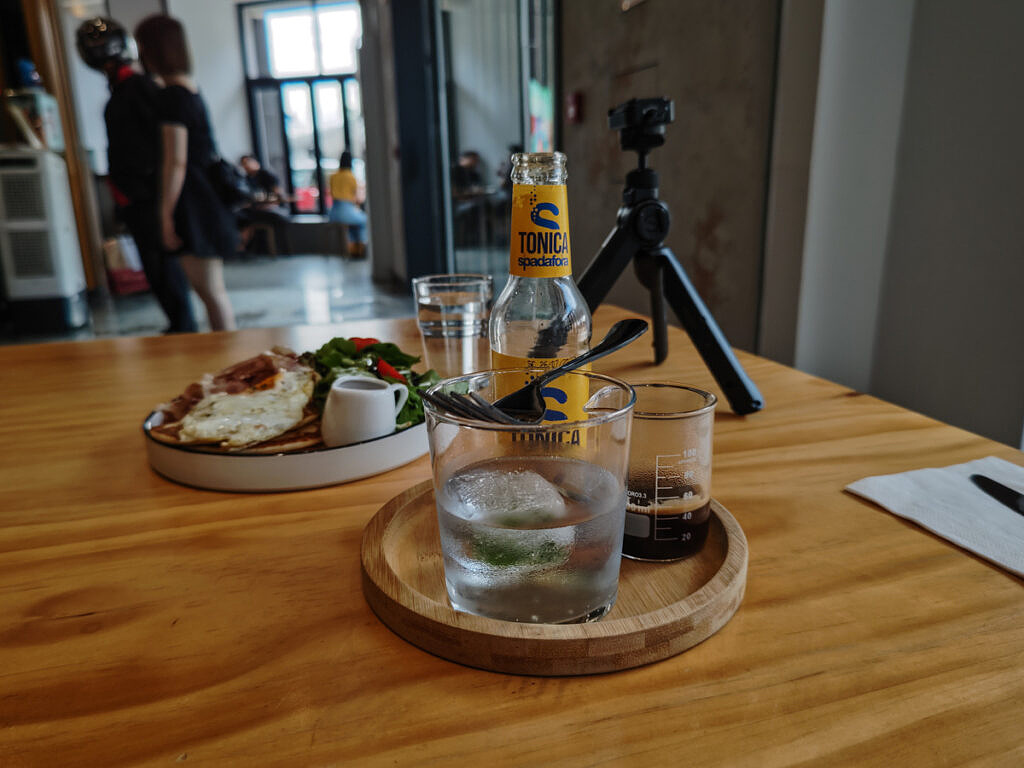 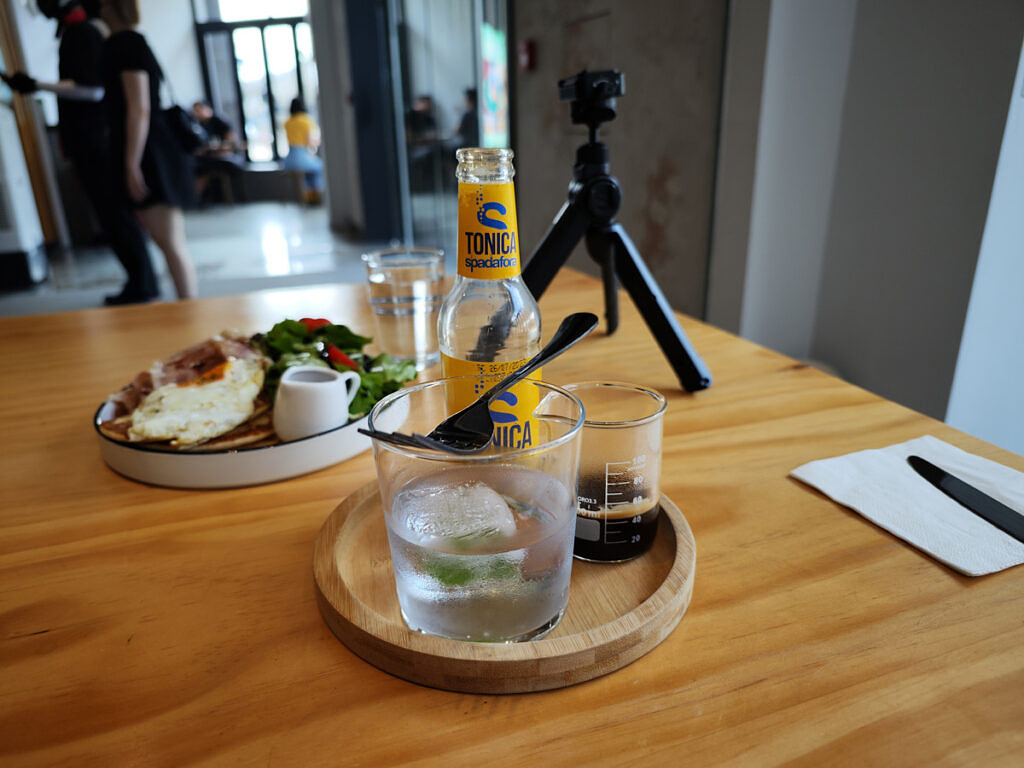 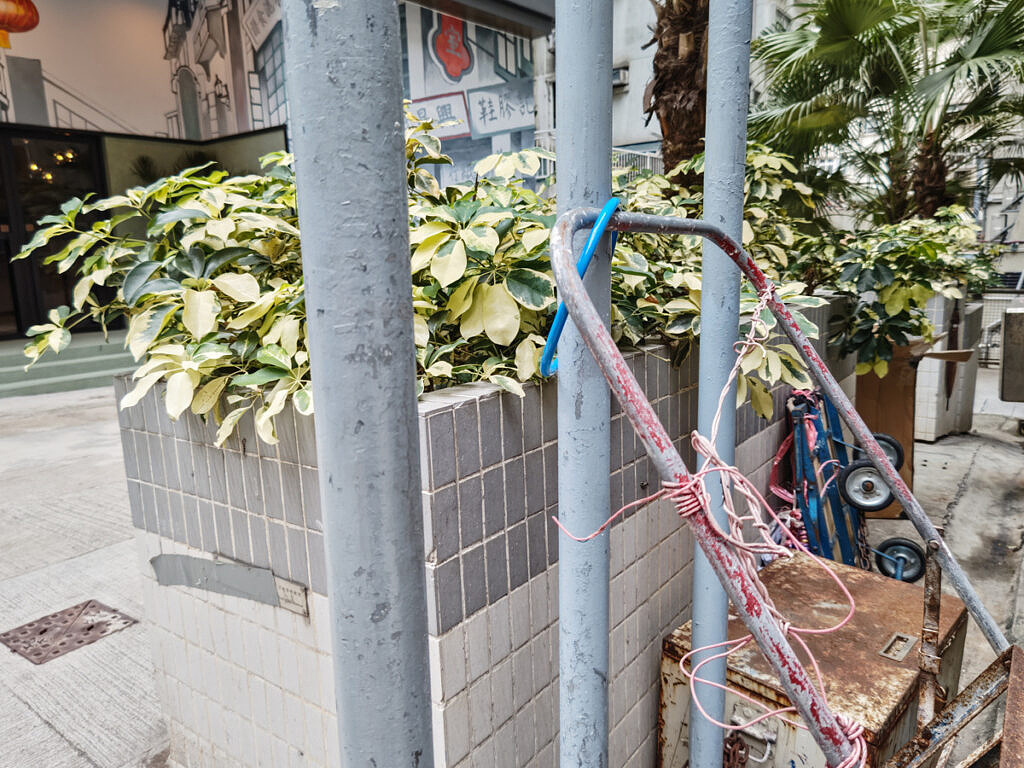 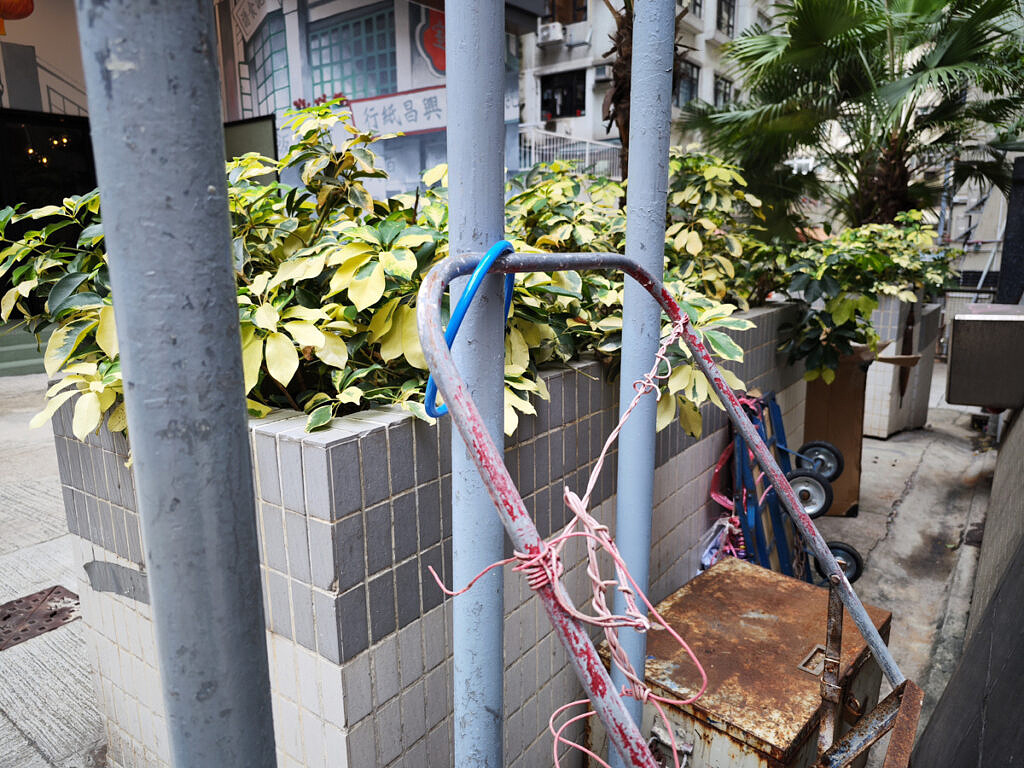 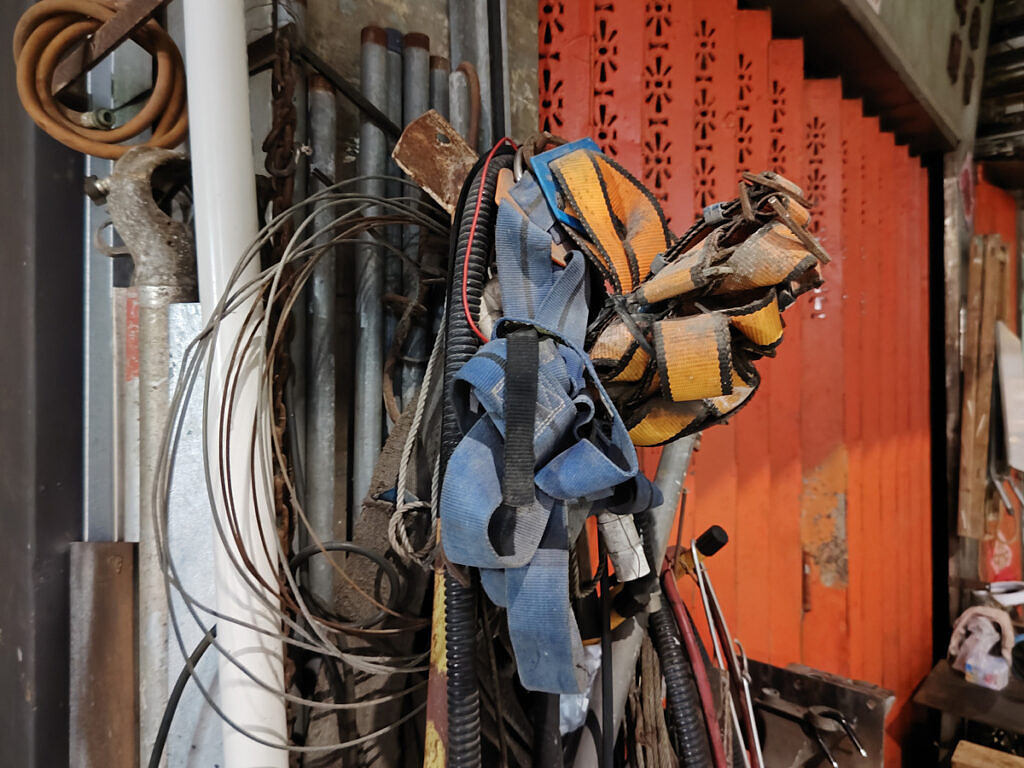 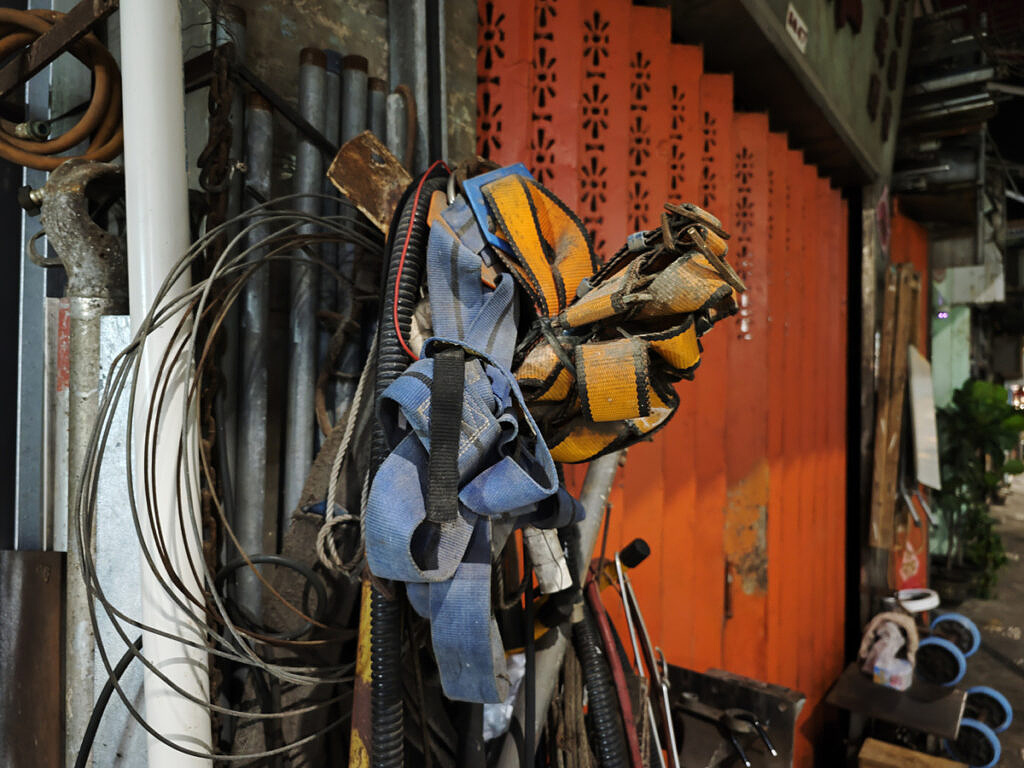 In the above photos, you can see both Sharp and Xiaomi produced great-looking photos with similar color profiles and degrees of bokeh. In the second set of the drinks and food, and the last set of the construction tools, you can see Sharp’s photos exhibits the same “depth” that Xiaomi photos have, with natural, progressive focus dropoff as we move from objects in the foreground to background. A camera with a smaller image sensor would have produced a flatter image.

But Sharp’s cameras miss every now and then, producing washed-out colors, and slightly blurrier shots due to a slower shutter speed. In the third set above, of the street posts and plant, Sharp’s colors and sharpness are soft compared to Xiaomi’s.

Moving to low-light photos, the Sharp Aquos R7 will turn on light mode automatically much earlier than the Xiaomi 12S Ultra. This explains why the first set of the French wine bar looks so different. Sharp’s shot is artificially enhanced via night mode, but as a result, the colors are too warm and don’t look natural. Xiaomi’s photo looks not only much closer to the real-life scene, it’s just a more pleasing shot. 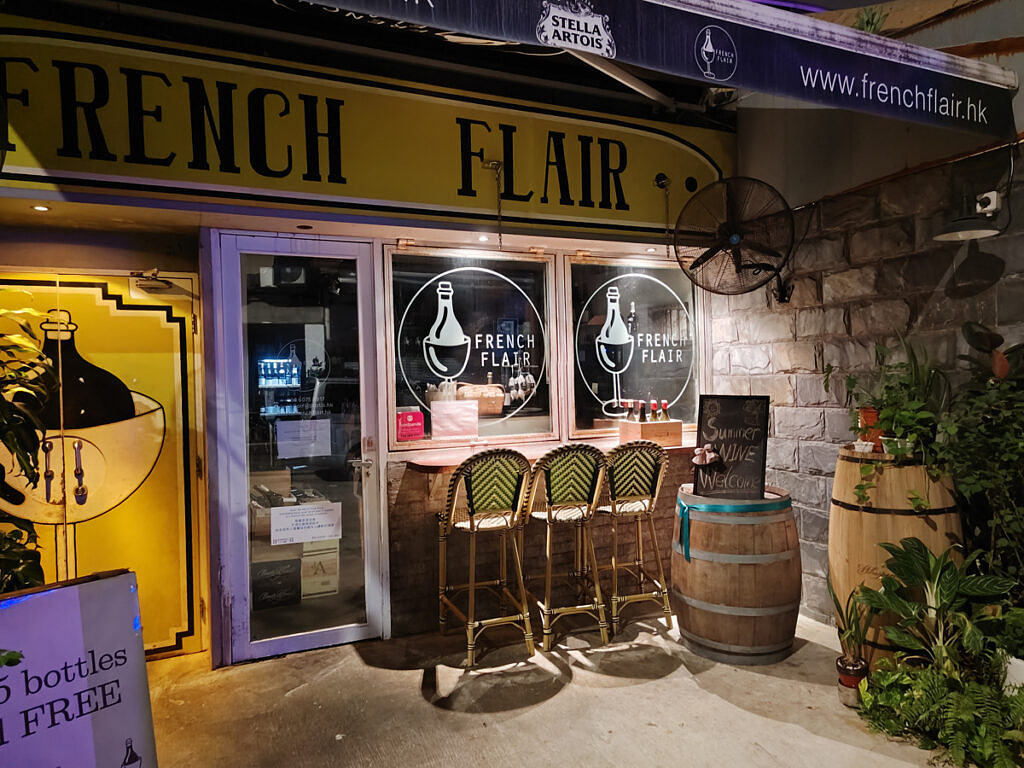 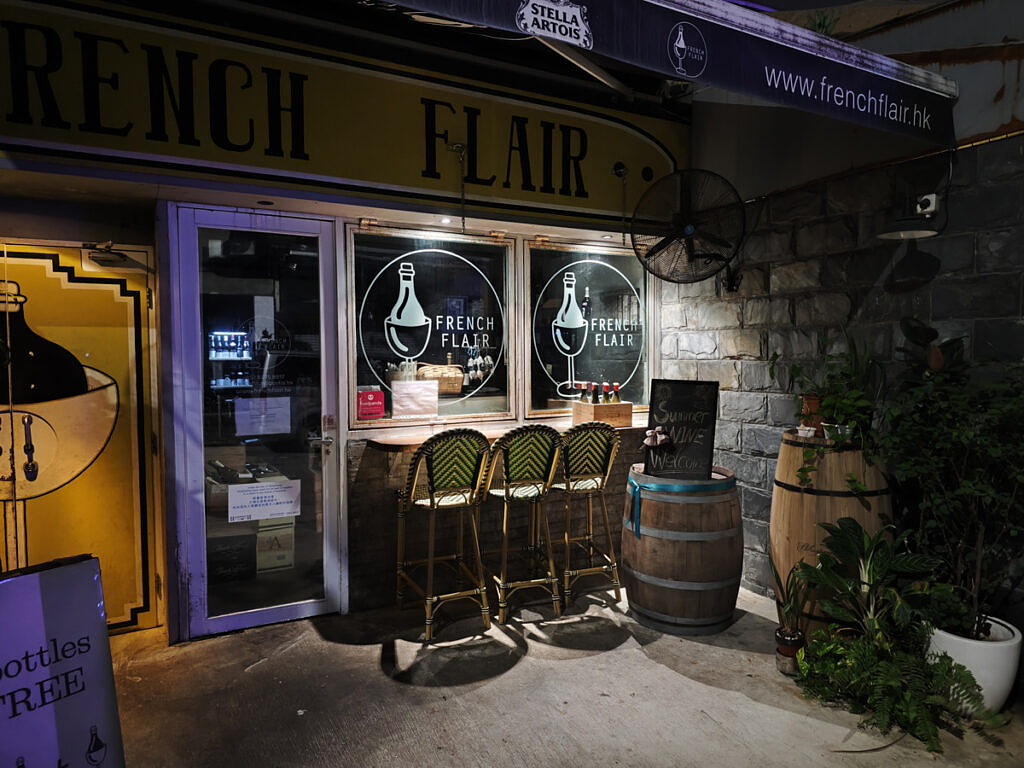 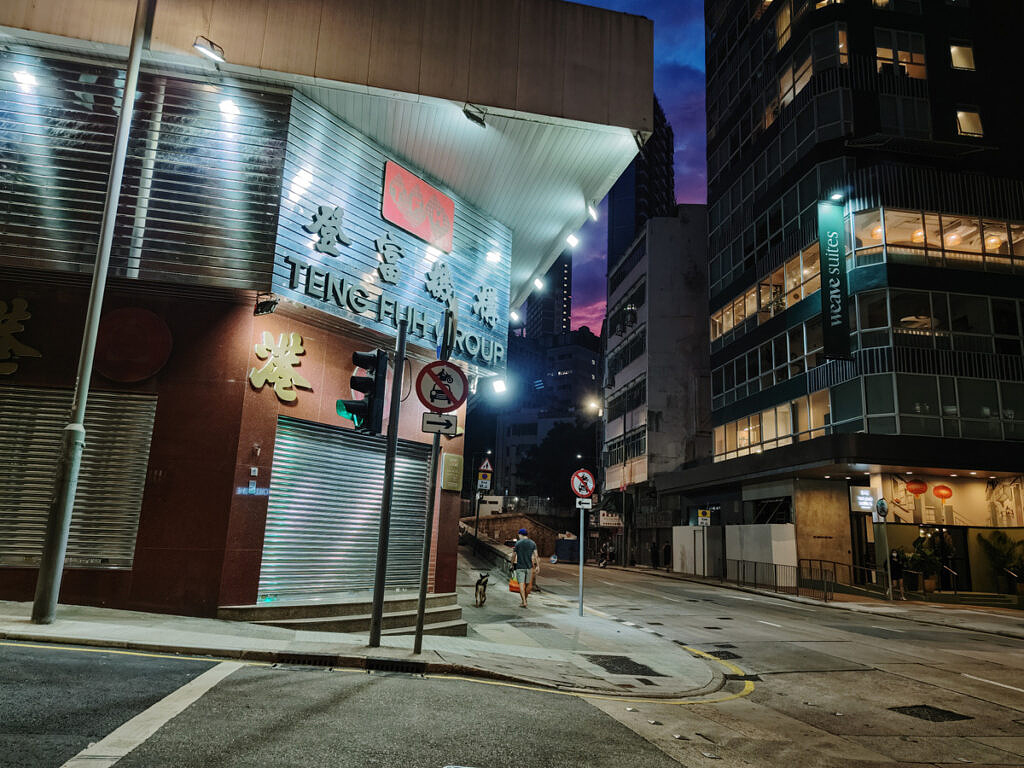 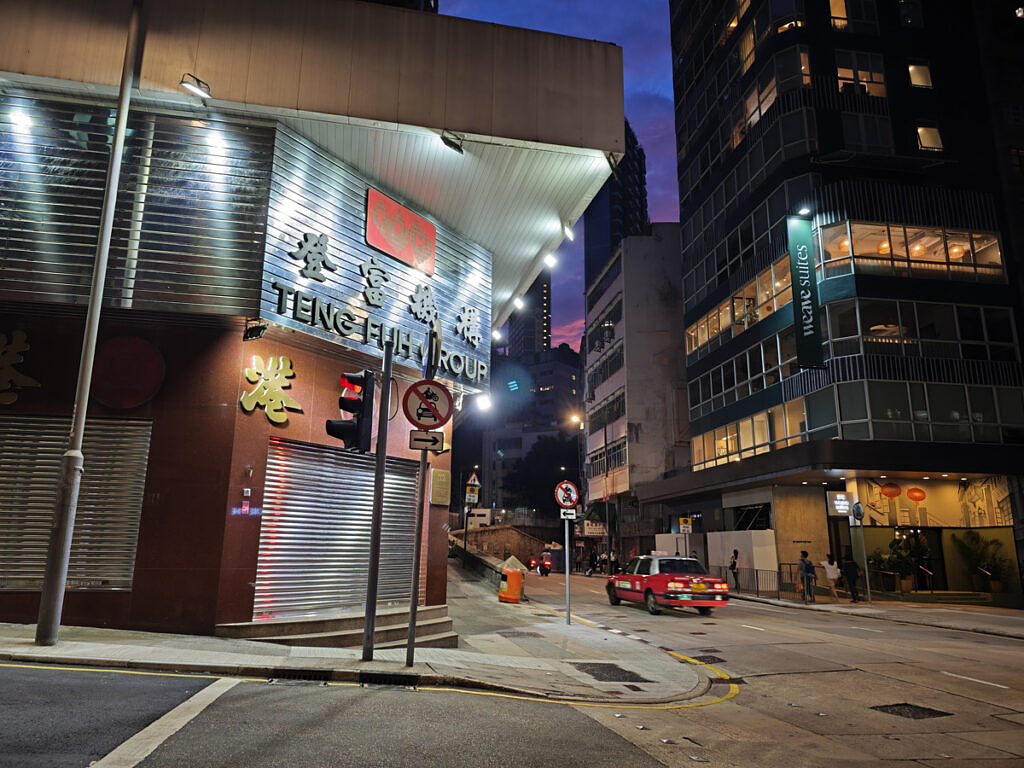 The second set is a virtual tie, both cameras produced beautiful shots, although we can see Xiaomi’s HDR exposes the lights in the building in the right frame just a tad better. In another set below, we can see similar photo quality outside of the first set, in which night mode again played a factor. I do like my skin tone better in Sharp’s selfies, but the photo is noticeably softer on details. 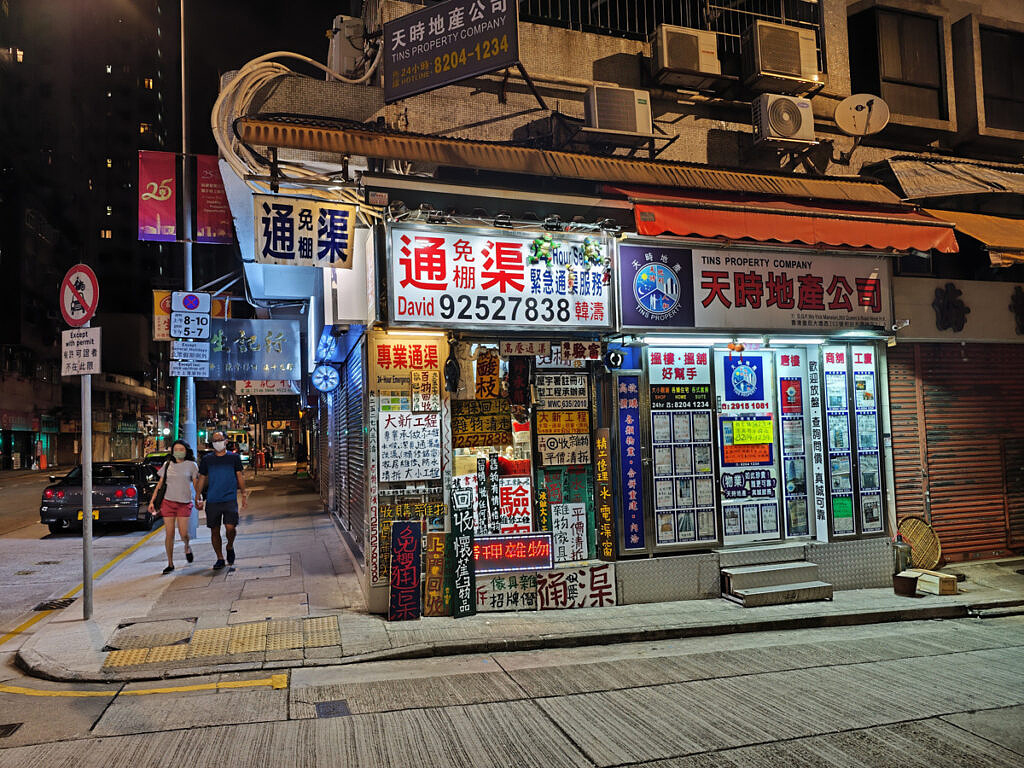 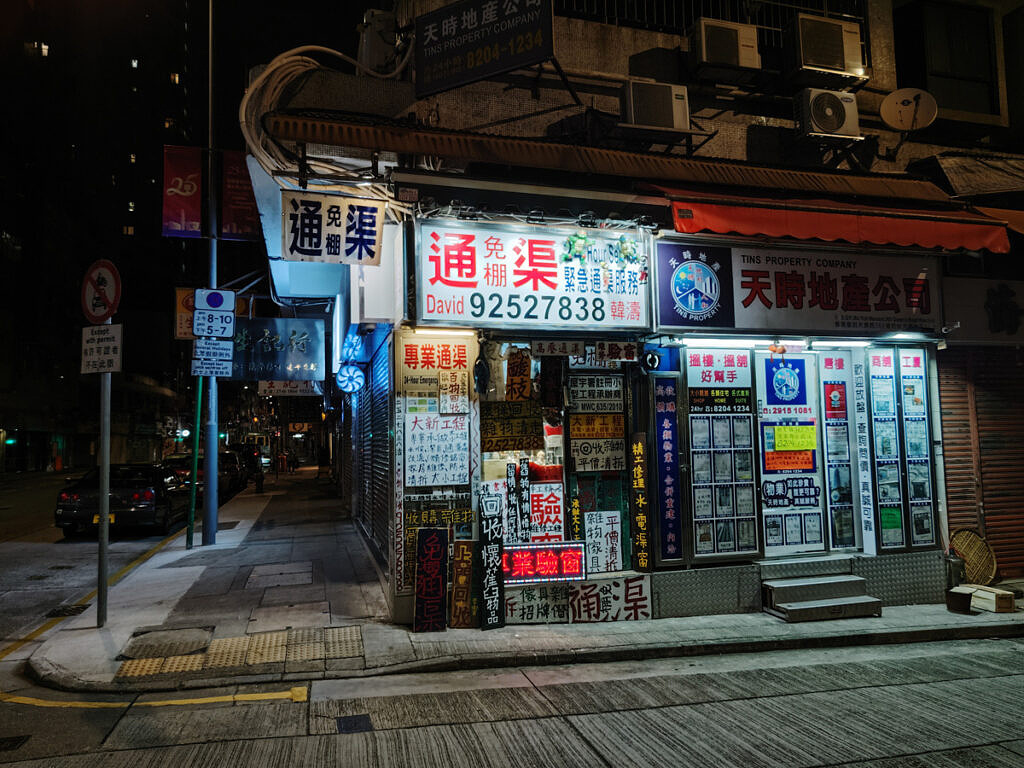 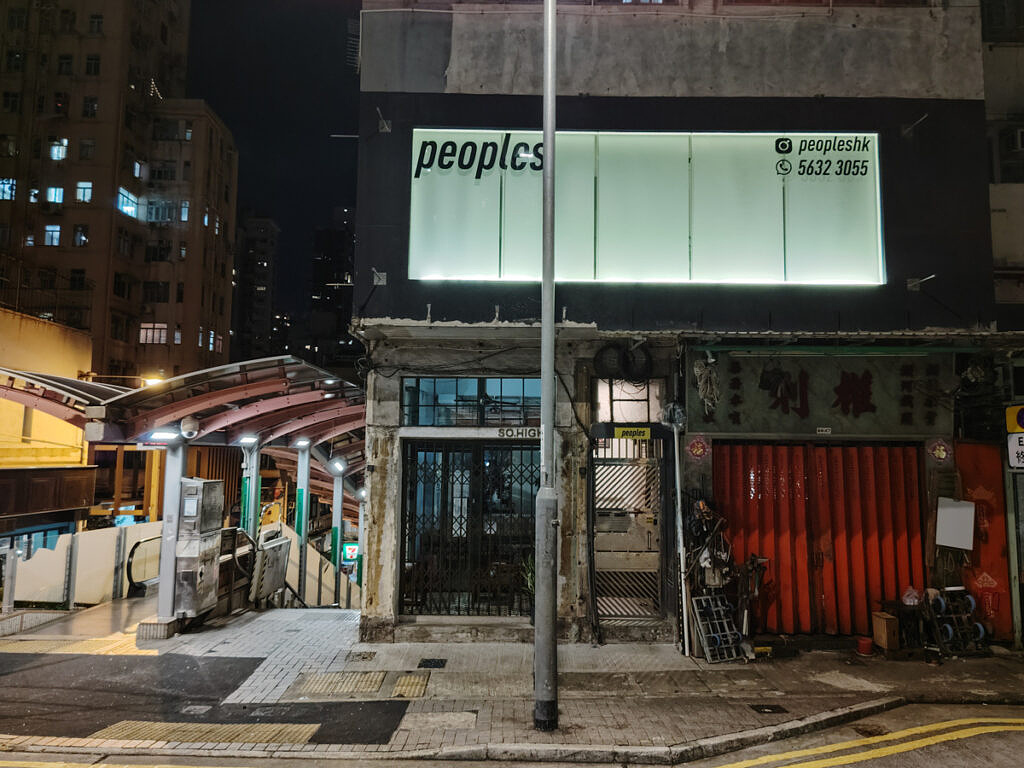 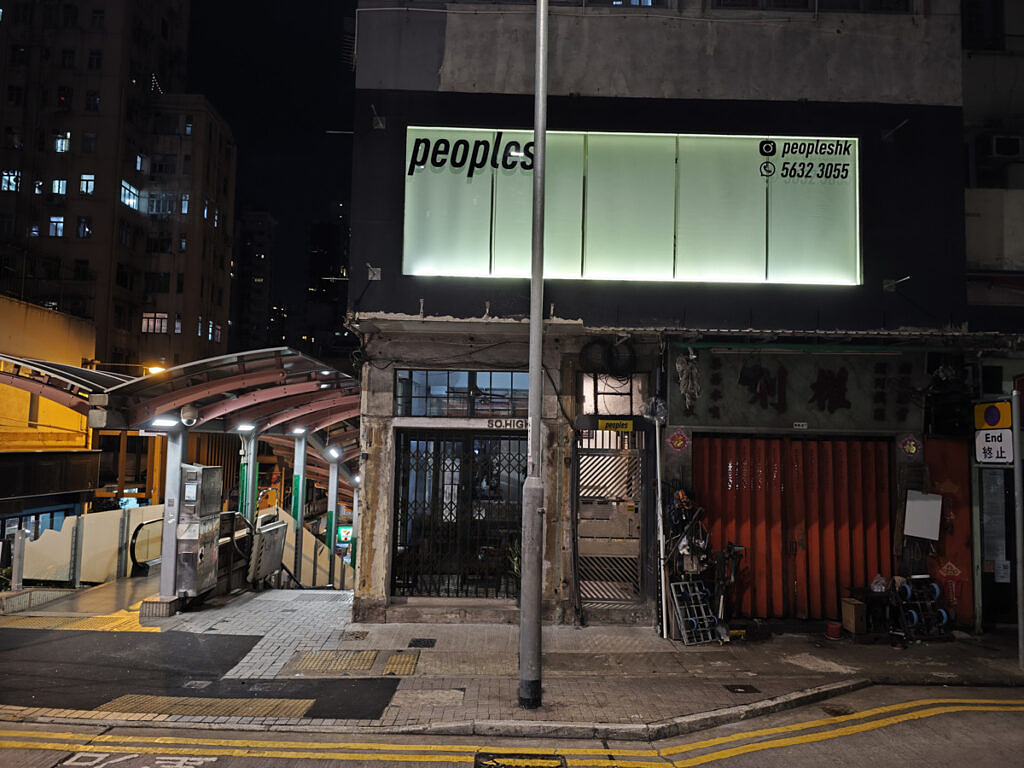 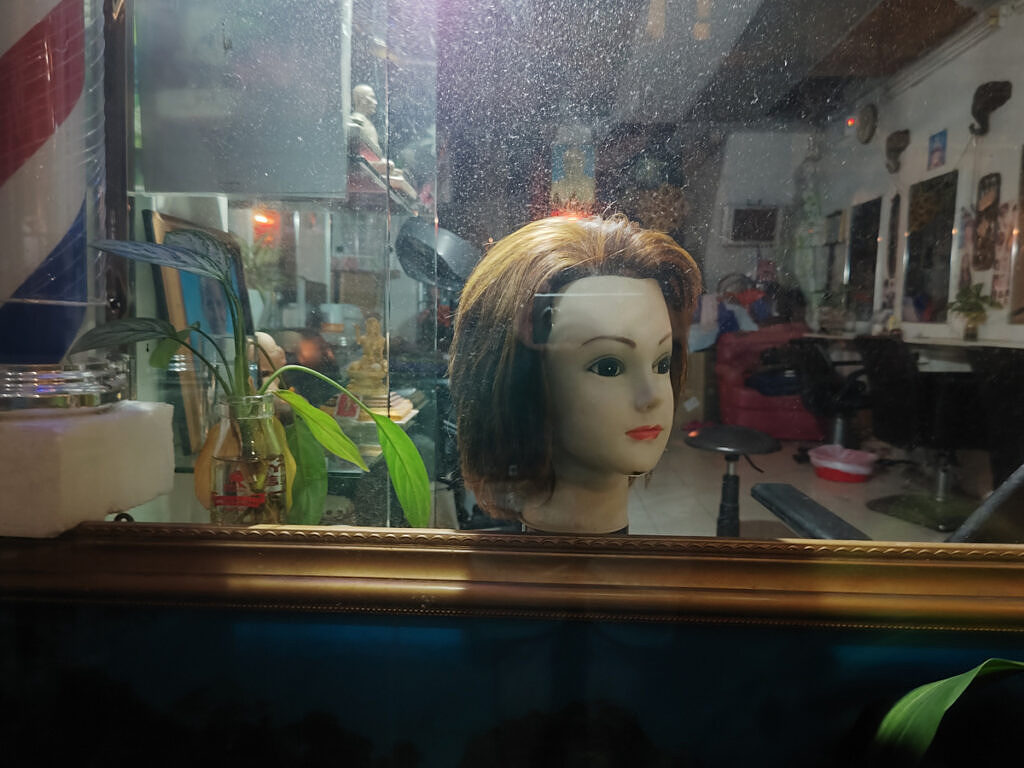 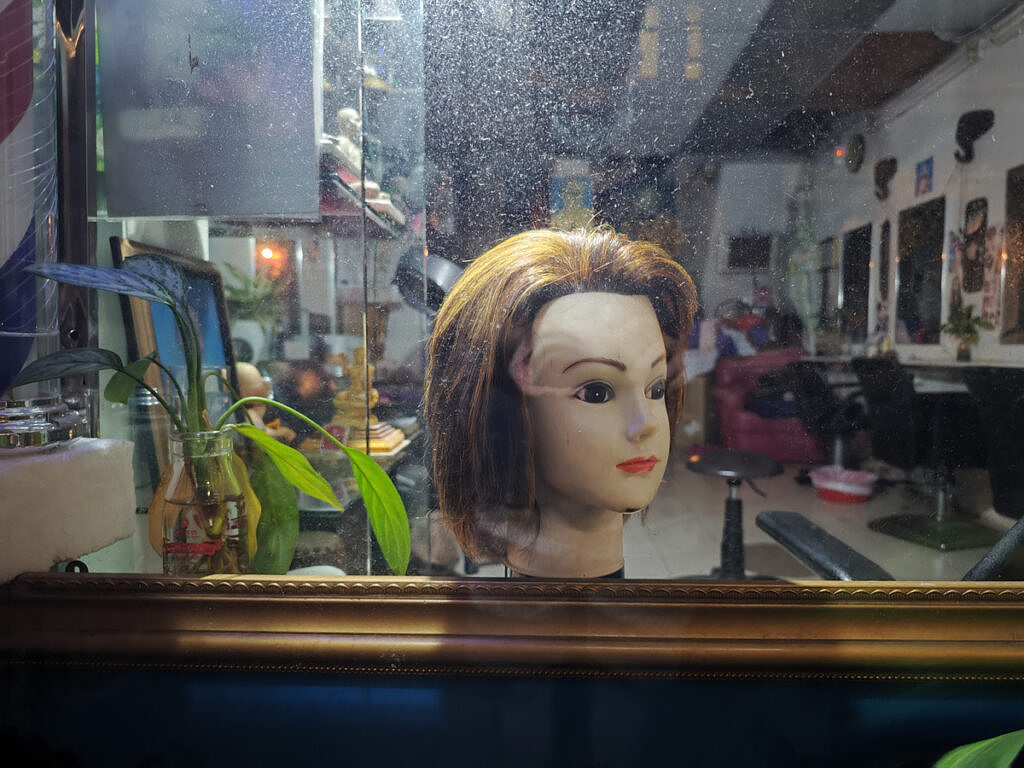 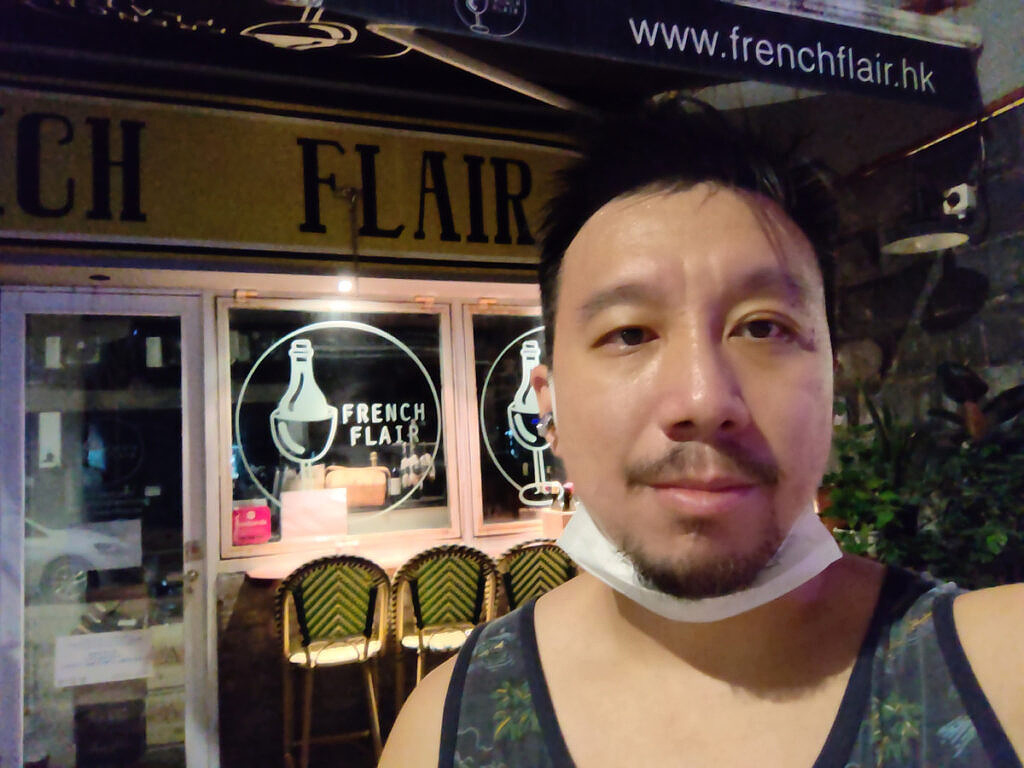 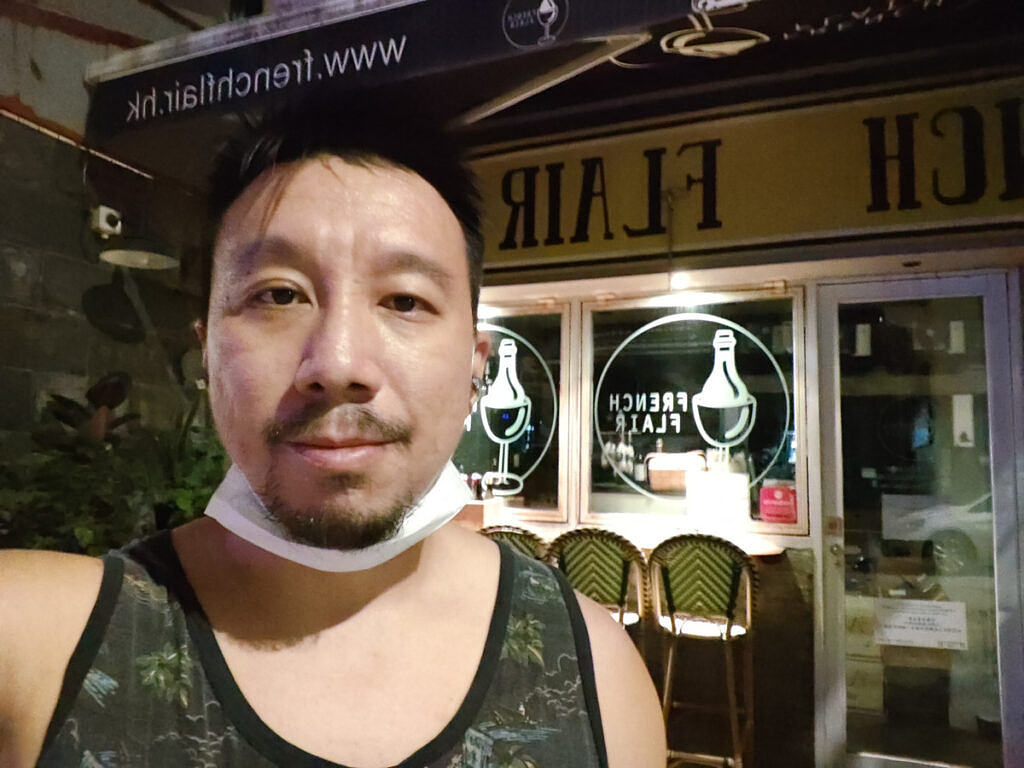 Overall, Sharp’s camera is really good and produces shots with shallow depth-of-field and that heavy bokeh look that makes it feel more like a real camera photo. The shutter speed is noticeably slower than Xiaomi 12S Ultra, and the lack of an ultra-wide or zoom lens means the system is still a bit lacking overall, however.

The Aquos R7 runs Android 12 with Sharp’s Android skin on top. Aesthetically speaking, the Android skin doesn’t stray too far from how Android looks until you dive into the menu, that is. That’s when you see this cartoonish settings page designed to teach those new to the phone how to take advantage of all the software features.

Most of these special features that Sharp made a whole cartoon illustration for are just rather common features like a dedicated game mode, or using finger gestures to grab screenshots.

You can assign specific refresh rates for specific apps, including motion smoothing in video, which in my opinion should never be used. There are a few bloatware apps that come with the phone, including Amazon Prime and Japanese apps from carrier Softbank and other Japanese firms. The homescreen and notification panel looks a bit like Pixel’s version of Android, with wide oval shortcut toggle buttons and a Google Search bar at bottom of the screen that cannot be removed.

Animations are buttery smooth as mentioned, but it’s hard for me to see the difference 240Hz and 120Hz. And if you’re wondering if using the phone at 240Hz hurts battery life, yes it absolutely does.

Despite the 5,000 mAh battery, the Sharp Aquos R7’s battery life was less than stellar during my testing, offering about just four to four-and-half hours of screen-on time per day. If I take the phone out all day, it can go about 10-11 hours before the battery dips below 5%. It doesn’t help that Sharp used the older Snapdragon 8 Gen 1 SoC instead of the more efficient Snapdragon 8 Plus Gen 1, which has managed to give the likes of the Asus Zenfone 9 and Xiaomi 12S Ultra superb battery life.

The packaging also doesn’t include a charger or charging cable, and due to an almost complete lack of English marketing material, I do not know the official wattage the Sharp Aquos R7 can be charged at. Using my MacBook’s 96W USB-C charger, I was able to charge the Aquos R7 from 0% to 100% in a little under an hour. 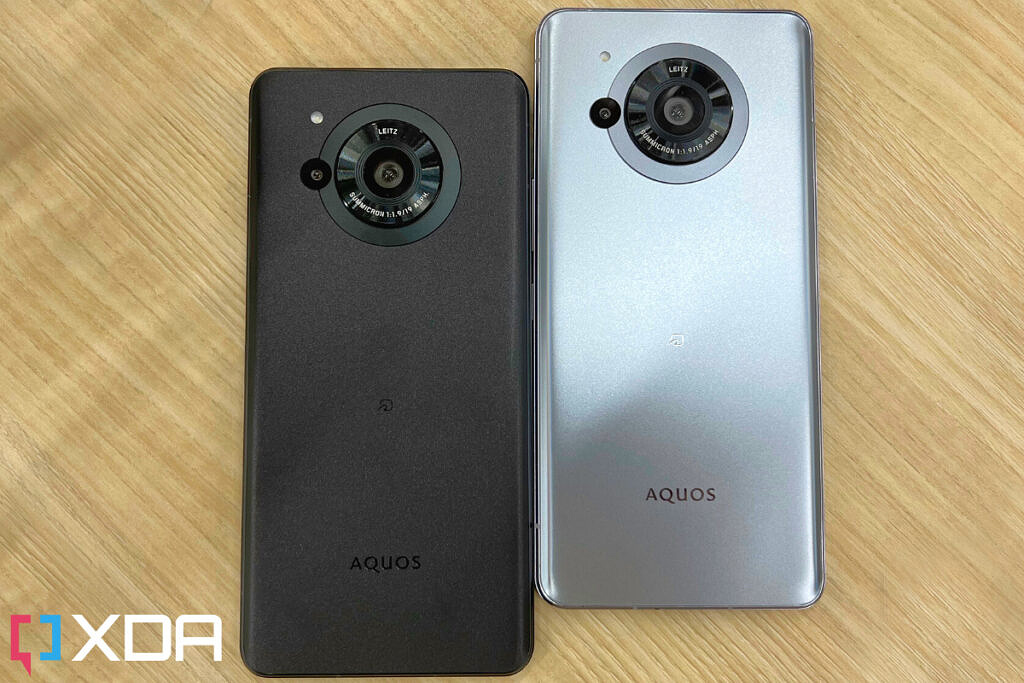 In terms of regular smartphone use, the Sharp Aquos R7 performed absolutely fine (except for the mediocre battery life). Apps launched without issues, the stereo speakers sound loud and full, and haptics are even solid, unlike the mushy mess of last year’s Aquos R6. Because the phone is for the Japanese market only, I was unable to get 5G in Hong Kong where I tested the phone — and I doubt any reader outside of Japan would be able to get 5G connectivity either.

Sharp Aquos R7: Should you import this phone?

The Sharp Aquos R7 is a very interesting phone that brings a superb 1-inch camera that, through sheer image sensor size alone, differentiates itself from most phone cameras on the market. The display is also technically brilliant, even if you won’t be able to notice where it’s superior to a “lesser” 120Hz panel.

However, even more so than the China-only Xiaomi 12S Ultra, the Sharp Aquos R7 is a very niche phone that most readers should not consider. Even if you were to import, the Xiaomi 12S Ultra is just a better option, as it’s lower in price, has a better processor, and a better overall camera system. 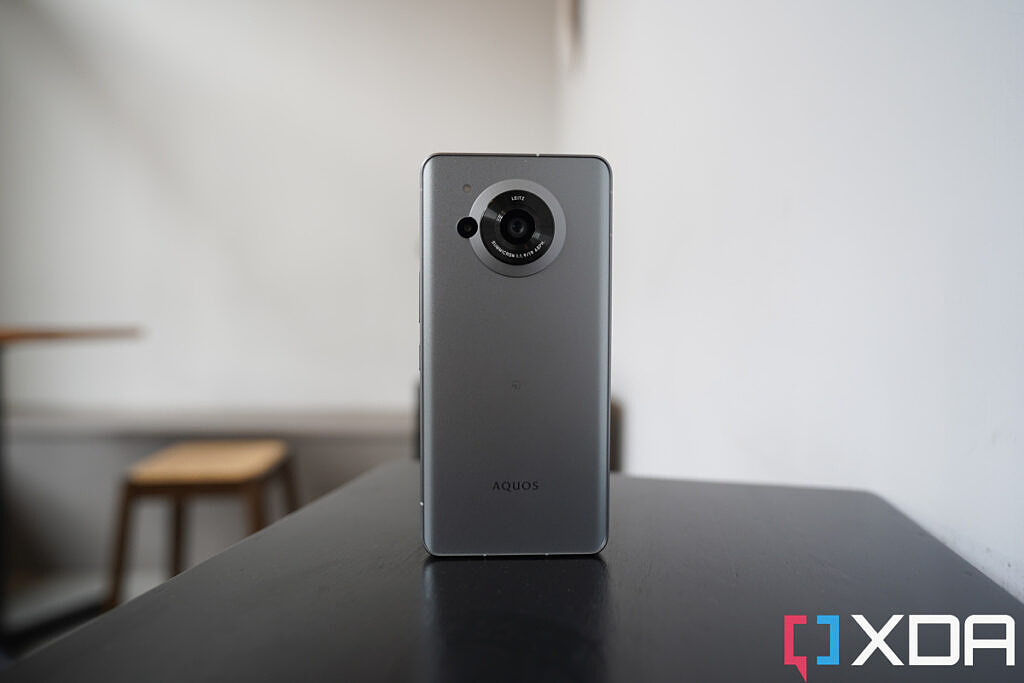 But this doesn’t matter, does it? As mentioned at the beginning, Sharp doesn’t seem to care about marketing its phones outside of Japan, nor does it seem to care too much about overall sales numbers. Japan is essentially an iPhone country (iPhones have a near 65% market share in the country, and this figure jumps much higher in Tokyo from my own personal anecdotal experience ). Even beloved local giant Sony’s phones are a distant, distant second place (10.8% market share). Sharp’s 1.77% in Japan (and virtual zero % anywhere else) really make the phones beyond obscure.

Japan has always been a land of quirky, unique gadgets, and the Sharp Aquos R7 fits that definition more than an actual phone that mainstream consumers should consider.