Google debuted the Tensor in the Pixel 6 series late last year — a semi-custom high-end chipset with Google’s special hardware sauce slathered on top of it.

Although the Pixel 6 series didn’t quite boast best-in-class flagship performance, it still offered plenty of power and impressive machine learning capabilities. Now, the mid-range Pixel 6a is also using the Tensor chipset, but would it be better if Google created a Tensor Lite processor for the Pixel A-series instead?

The arguments for a mid-range Tensor SoC

Now, it sounds rather counter-intuitive as a powerful high-end processor is usually a great thing to have in a smartphone. Google Tensor does indeed fit the bill and is a very capable SoC. But there are a few reasons why Google should perhaps consider cutting things down somewhat for future Pixel-A phones.

For one, you only need to look at the Pixel 6a to realize that Google seems to be prioritizing the use of the Tensor chipset above all else. Sure, you’re getting a high-end processor, but this comes at the expense of several other features. High refresh rate? Gone. Fast wired charging? Nope. More competitive camera hardware? Forget about it. A more current version of Gorilla Glass? Nope, you have to make do with Gorilla Glass 3.

Flagship processors are expensive. By opting for a less capable but possibly cheaper Tensor processor, Google could potentially spend money and resources on these aforementioned aspects of a mid-range Pixel’s design. Alternatively, Google could take the cheaper route, as it did with the Pixel 4a, and slash the asking price. A Pixel 7a at $399 would be a more palatable deal than the $449 Pixel 6a.

A cheaper, mid-range Tensor could allow Google to spend money on other features or pass the savings on to consumers.

There’s also a small argument to be made that the Pixel 6a isn’t fully exploiting the Tensor chipset in the same way that the Pixel 6 series did. Sure, you’ve got the face unblur and Magic Eraser camera features as well as offline voice typing, but you’re also saying goodbye to some camera features like Motion Mode. There’s also a lower resolution and slower refresh rate display than the Pixel 6 Pro, requiring less GPU power to drive. If the A-series isn’t going to leverage all the flagship features enabled by the Tensor chip, why use the full-fledged chip in the first place?

Going back to the drawing board for a mid-range processor would also allow Google to address some of the Tensor’s shortcomings more quickly than with a yearly launch cycle. For instance, we previously covered the Pixel 6 range’s significant reception issues that may well now plague the 6a as well. Our Pixel 6a review found that the device ran hot too. Mid-range chips, by their more frugal nature, tend to run cooler and with less battery drain than flagship processors. Google could potentially offer a smaller battery with the same screen on time, or provide longer endurance with the same battery capacity. This also opens the door for a more compact mid-range Pixel phone, in line with pocket-friendly Pixels of yore.

The Tensor chipset is actually related to the Samsung Exynos family. It’s designed and manufactured by Samsung and uses Arm CPU cores and an Arm GPU. It even features the same modem as the Galaxy S21 series. It stands to reason that any mid-range Tensor processor would share a similar foundation.

Google’s original chipset opted for a rather eclectic octa-core CPU design, featuring two Cortex-X1 cores, two older Cortex-A76 cores, and four Cortex-A55 cores. That’s a high-performance setup, so Google could ditch the Cortex-X cores for a theoretical Tensor Lite processor in favor of medium and little cores (be it in 4+4 or 2+6 layouts). There are a few upsides to dropping the Cortex-X cores. They’re a bit bigger than the medium and little cores and require a bigger cache for peak performance, so there’s some silicon savings to be made and licensing costs could be shaved by removing them.

It makes sense for a theoretical Tensor Lite SoC to ditch those power-hungry Cortex-X cores, but AI silicon should still be retained.

Furthermore, Arm’s Cortex-X cores are built with performance in mind rather than battery life, generating plenty of heat. Processors without a Cortex-X, like the Dimensity 8100-Max and Snapdragon 870, show less severe throttling than we see in recent flagship processors and seem to deliver solid battery life. Arm’s latest medium core — the Cortex-A715 — would be a suitable alternative. Arm claims that the A715 can reach the same performance as the Cortex-X1, maing it a good fit to support existing flagship Pixel features. Google has shown it’s not opposed to using older CPU tech, though. A Cortex-A77, or better yet a Cortex-A78, paired with Cortex-A55 little cores would still provide plenty of performance at an affordable price point.

Google would almost certainly use an Arm GPU in a theoretical mid-range processor, with the current Tensor SoC using an Arm Mali-G78 MP20 GPU. There are good reasons to shrink the shader core count, though; gaming isn’t a top priority in the mid-tier, and GPU cores take up a lot of silicon space and therefore cost. Alternatively, a more recent mid-tier Arm graphics core, such as the Mali-G610 or Mali-G615, is more performant and power efficient. Arm’s recent mid-range GPUs are the same fundamental designs as its flagship GPUs, mainly differing in terms of shader core count. So while switching to mid-range graphics and reducing the number of shader cores would result in a performance hit compared to flagship silicon, it should still provide decent performance for advanced games.

Mid-tier silicon isn’t just about performance and cost, it could also free Google up to build a more compact handset.

The modem, however, is an area ripe for improvement. The original Tensor uses an external 5G modem to support some of the best features, but external modems typically consume more power and have a larger footprint than an integrated modem. Moving to a less capable but integrated modem would save power and component costs, but with a few drawbacks for peak speeds and 5G futureproofing. Still, do you really want 10Gbps speeds and other fringe features in lieu of better battery life and lower costs in a mid-range phone?

Either way, a mid-range Tensor SoC with a less impressive CPU, scaled-back GPU, and integrated modem would result in a design that might be less capable than the original Tensor. But these cutbacks would free up silicon area on a Tensor Lite chip, resulting in a smaller design with better battery life and fewer concerns about overheating. Aside from the obvious benefits of a longer-lasting, cooler running phone, it could also allow Google to try new things in terms of the phone’s design with battery and cooling constraints lifted somewhat. That could mean a thinner design, a more compact phone, or something like a clamshell foldable. It could also lower manufacturing costs, as more chipsets can be produced from the same silicon wafer.

The upsides outweigh the downsides 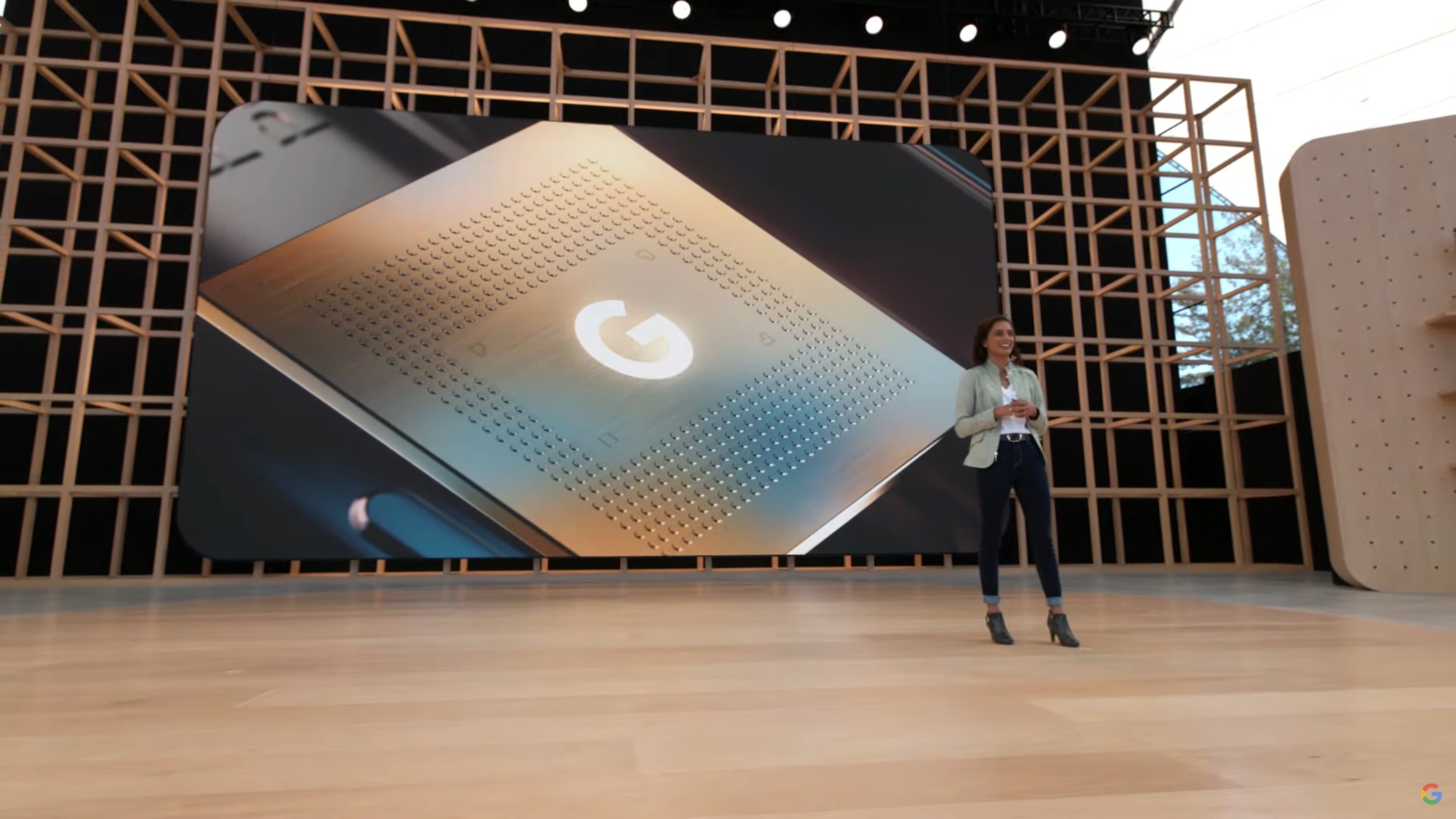 That’s not to say a mid-range Tensor processor for the Pixel A series would be without any drawbacks, as there are some advantages to using a high-end SoC instead.

Continuing to use the previous year’s flagship Tensor processor gives Pixel A phones plenty of power and better performance than their rivals. And this power ensures smooth performance in general and a fluid experience when playing advanced games, securing bragging rights for Google along the lines of Apple’s iPhone SE. A flagship Tensor chip in a Pixel A phone also simplifies matters for Google when it comes to porting flagship Pixel features to the Pixel A series down the line, as well as simplifying the development process for keeping its phones updated.

As we found with the iPhone SE, flagship silicon can be overkill in a mid-range smartphone.

There’s also a question of whether Google would save any money by switching to a mid-range Tensor chip. It’s possible the company is using the flagship Tensor chipset because it already has plenty of stock. Plus, a new chip would require additional costs in terms of research, development, and starting up production.

Nevertheless, there are clearly significant benefits to using a mid-range Tensor processor. Between a potentially cheaper price tag, a more optimized mid-range feature-set, a cooler chip, and a more battery-friendly phone, the upsides are obvious. Plus, mid-range doesn’t have to mean under-powered, as today’s best mid-range processors can take the fight to older flagship SoCs.