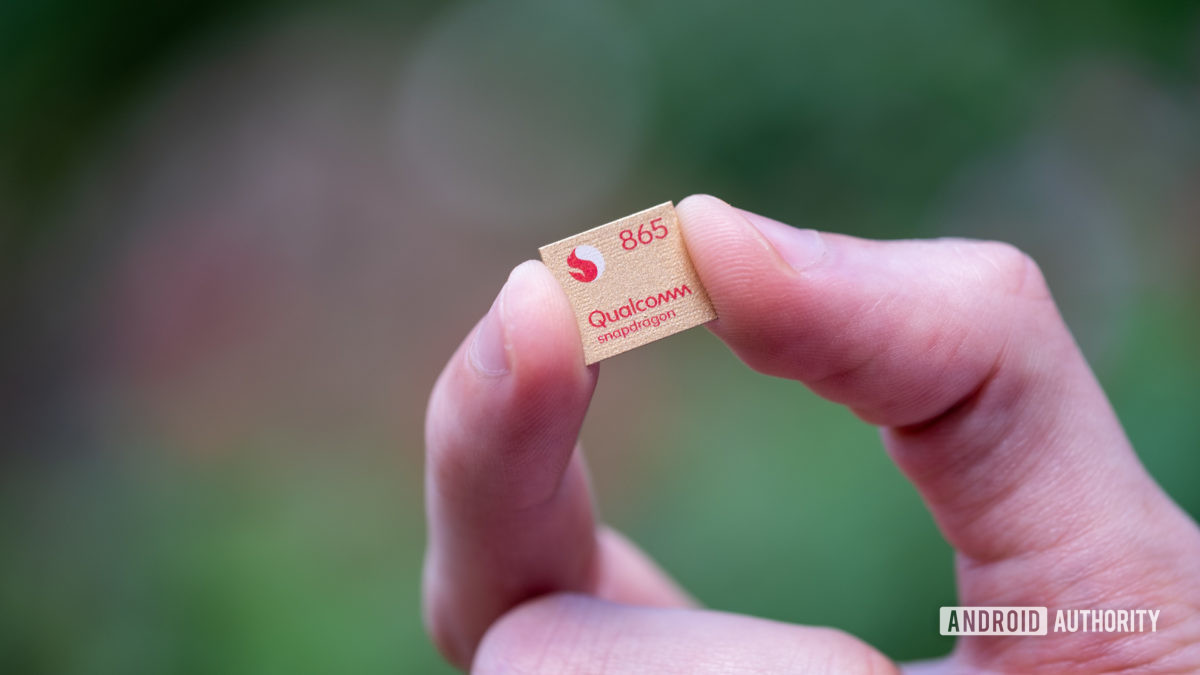 Qualcomm’s Snapdragon processors are the most ubiquitous SoCs in the Android smartphone space. Samsung uses Snapdragon for its Galaxy S line in the US and Korea, and it also powers devices from LG, OnePlus, and essentially every OEM making flagship-grade phones that doesn’t also make its own silicon. There’s a very high chance that you’re reading this on a device using a Qualcomm Snapdragon processor right now.

Snapdragon chips aren’t just found in expensive flagship smartphones though. There’s a whole portfolio of processors built for handsets at various price points. Performance and features differ a fair bit between these models, so let’s break down how the company’s latest SoCs compare and what capabilities you should expect. 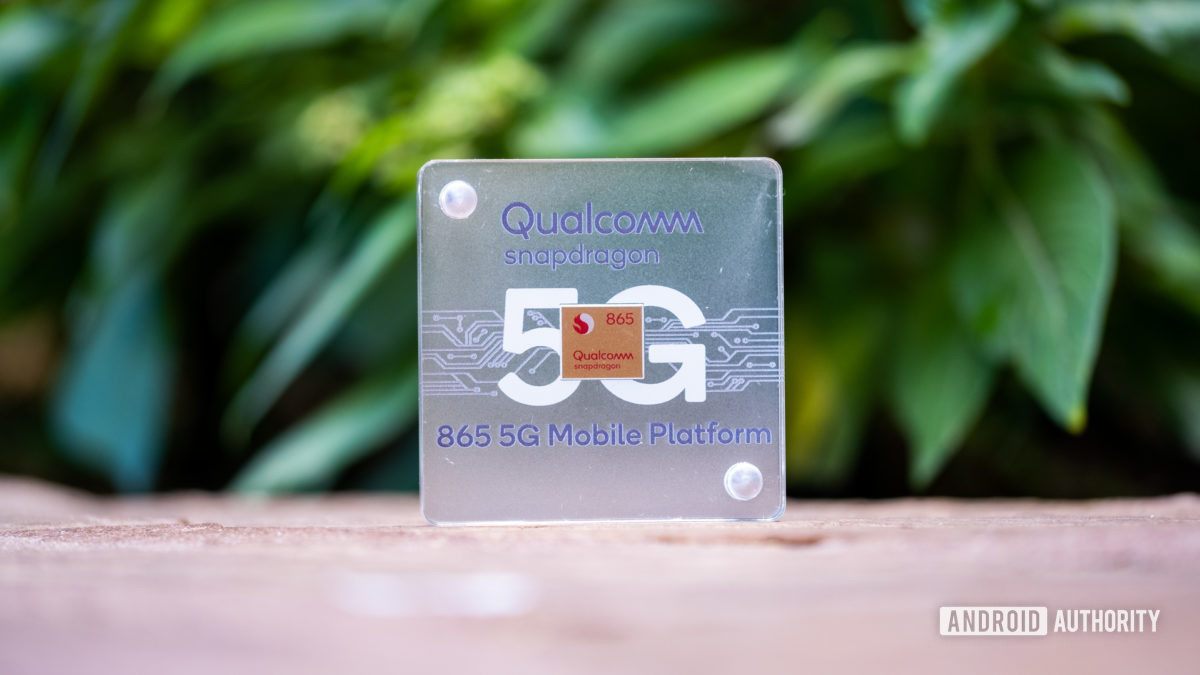 Looking for the very best Qualcomm smartphone processor? Then you want the Snapdragon 865, the firm’s latest and most powerful chipset. Much like its predecessor, the new chipset sports a tri-cluster semi-custom CPU arrangement, featuring one powerful 2.84Ghz Cortex-A77 core, three less powerful but still very capable 2.4Ghz Cortex-A77 cores, and four low-powered but efficient Cortex-A55 cores. Qualcomm’s Adreno graphics hardware also tends to lead the industry in terms of sheer power and capabilities, and the 865’s Adreno 650 continues that trend.

However, the company has invested heavily in other bits of silicon in its chipsets, such as the GPUs, modems, and image signal processors for cameras. Speaking of camera technology, this is Qualcomm’s first chipset to support 8K video recording, joining Samsung’s Exynos 982X series and Exynos 990. 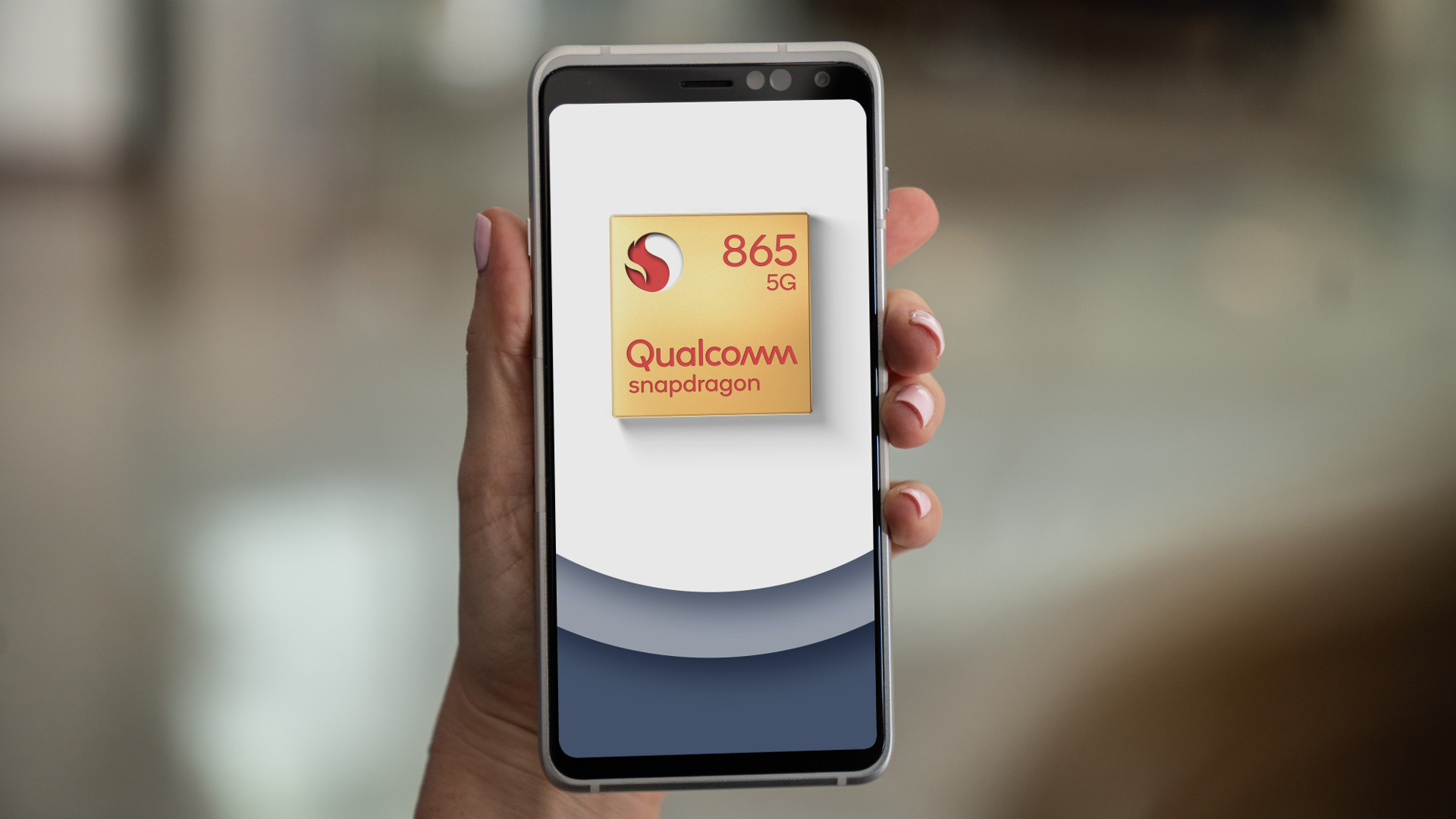 https://www.youtube.com/watch?v=Ic8nMpGWFd0&feature=emb_title We saw the first 5G phones emerge earlier in 2019, but 2020 promises to be the year when 5G devices truly go mainstream in many markets. The newly announced Snapdragon 865 processor is expected to …

The Snapdragon 865 is also 5G-enabled, supporting both mmWave and sub-6Ghz standards. It’s not the first 5G flagship chipset from the brand though, as last year’s Snapdragon 855 series also offered next-generation connectivity. Both the 855 series and the 865 offer external 5G modems though, unlike some rivals. This generally means more power consumption compared to a processor with an integrated 5G modem.

Qualcomm isn’t the only company making flagship processors, with rival chipsets including the Samsung Exynos 990, Huawei’s HiSilicon Kirin 990, and MediaTek’s Dimensity 1000. But it’s generally considered the top dog in terms of features and brand name, although other competitors generally have plenty to offer too. 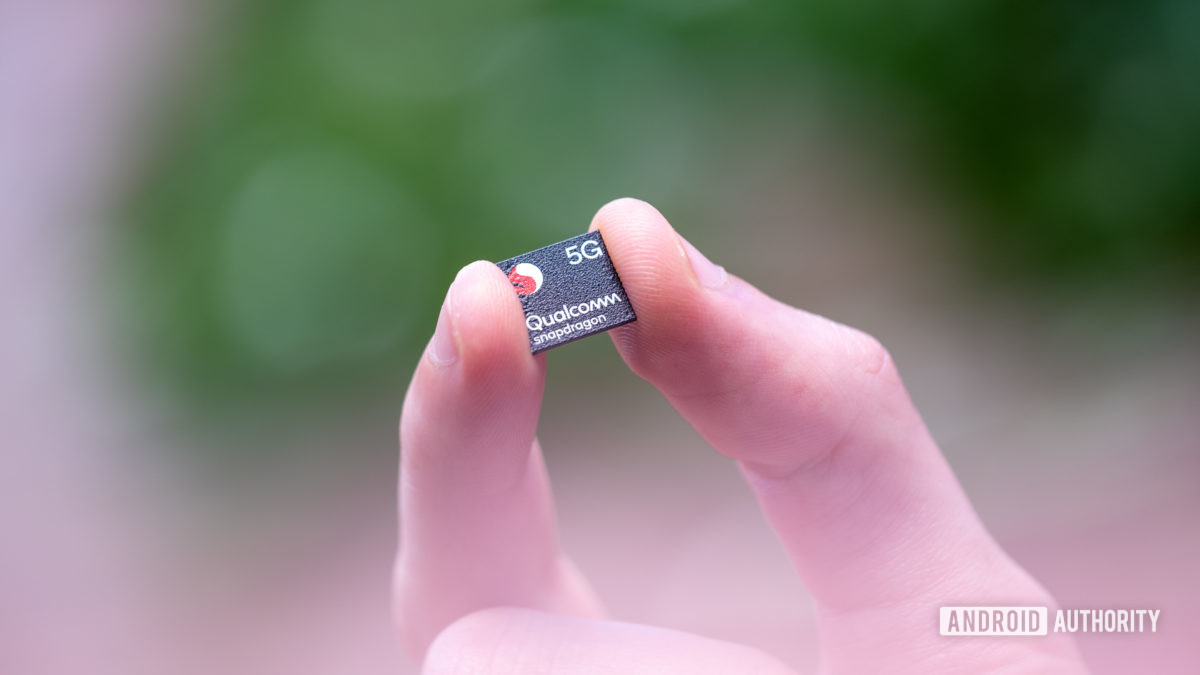 Qualcomm’s Snapdragon 700 series isn’t quite as straightforward as its flagship 800 series. This is due to the sheer number of them, as well as the lower end chips crossing into the 600 series.

The Snapdragon 700 series is essentially an upper mid-range family of processors, with the Snapdragon 765 series being the most capable of the lot. This is Qualcomm’s first mid-range 5G family, supporting both mmWave and sub-6Ghz flavors of 5G. It also offers a similar triple power domain CPU design as the flagship processors, albeit in a 1+1+6 layout rather than 1+3+4 seen on the flagship SoCs.

Aside from the addition of 5G and a tweaked CPU layout, the Snapdragon 765 series also stands out from other 700-series processors due to its beefier Adreno 620 GPU. The 765 family also sports a tiny 7nm manufacturing processes, on par with flagship chipsets. A smaller manufacturing process generally means a more power-efficient design when everything else is equal.

The Snapdragon 765 series still has a few things in common with the Snapdragon 730 series and Snapdragon 720G, which are next on the totem pole in terms of power and capabilities. We’ve got octa-core CPUs featuring two powerful Cortex-A76 CPUs and six Cortex-A55 cores, and powerful Spectra image signal processors for high-resolution imaging.

Mediatek chip guide: All you need to know about MediaTek processors 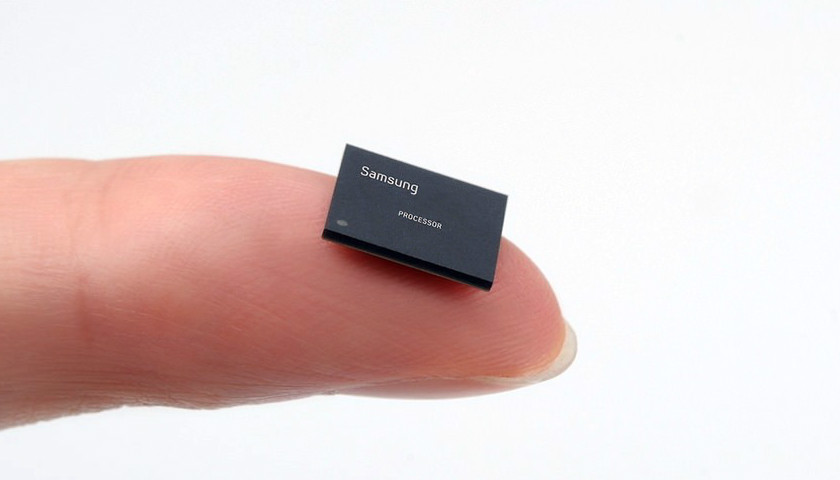 Samsung Exynos guide: What you need to know about Samsung’s processors

These aren’t the only Snapdragon 700 series chips, as the series debuted with 2018’s Snapdragon 710 (with the Snapdragon 712 being a mild upgrade). These two chips still offer a 2+6 CPU core layout, but use older Cortex-A75 cores instead of the Cortex-A76 seen in newer 700 series SoCs. So expect the new chipsets to edge out these ones when it comes to single-core performance, but you’re still getting good performance either way.

The Snapdragon 712 and 710 also offer inferior GPUs to the aforementioned stablemates, so gaming performance won’t be quite as smooth. Still, these GPUs are pretty powerful and should be able to handle most advanced games well enough.

The Snapdragon 700 range might lack the CPU and GPU power of the flagship Snapdragon 800 family then, but it has a few features in common with the top-end silicon nonetheless. You’re still getting capable Hexagon DSPs for better machine learning, Quick Charge 4 or 4+ support, and Bluetooth 5.0 or 5.1.

Furthermore, all of these aforementioned chipsets support 192MP snapshots, although they top out at a far lower resolution for multi-frame processing (e.g. HDR, night mode). You won’t get 4K/60fps or 8K here either, but 4K at 30fps is basically guaranteed at this tier.

The Snapdragon 670 and 675 offer powerful Cortex-A75 and A76 CPU cores respectively, paired with low-power Cortex-A55 cores. You can also expect solid GPUs (albeit inferior to the 700 series), Bluetooth 5 support, and Quick Charge 4+ capabilities. The 670 and 675 also deliver the 700 family’s support for features like 4K recording, 192MP snapshots, and 48MP photos with multi-frame processing.

Moving down, we also have the Snapdragon 665, which is a mild improvement over 2017’s Snapdragon 660. Both of these chips use much older CPU cores (four Cortex-A73 paired with four Cortex-A53 cores), and less capable GPUs on paper. So expect general performance, gaming, and camera performance to lag behind the Snapdragon 670 and 675. In fact, the Snapdragon 665 and 660 top out at 48MP snapshot support (i.e. without multi-frame processing such as HDR), so don’t hold your breath for 64MP or 108MP cameras with these processors.

Qualcomm has also recently launched the Snapdragon 662, essentially being a Snapdragon 665 clone with Bluetooth 5.1 capabilities and HEIF support. The latter means better quality pictures with no file size increase over previous formats, or the same quality at half the file size.

Otherwise, the bread and butter of Qualcomm’s 600-series is the Snapdragon 636 and 632. These processors target a lower price point than previously mentioned 600-series silicon, and also bring big cores to the table (four Cortex-A73 and four Cortex-A53). The 636 still offers a fast modem and Quick Charge 4, which the Snapdragon 632 lacks. Either way, both of these chips use Adreno 500-series GPUs, making them less adept at gaming than more recent Snapdragon 600 series chips.

The Snapdragon 636 and 632 chipsets really mark the cross-over point between mid-range and low-end capabilities. But they still sport those ever-important big CPU cores, which means general performance (e.g. system navigation, launching/loading apps) shouldn’t be an issue. 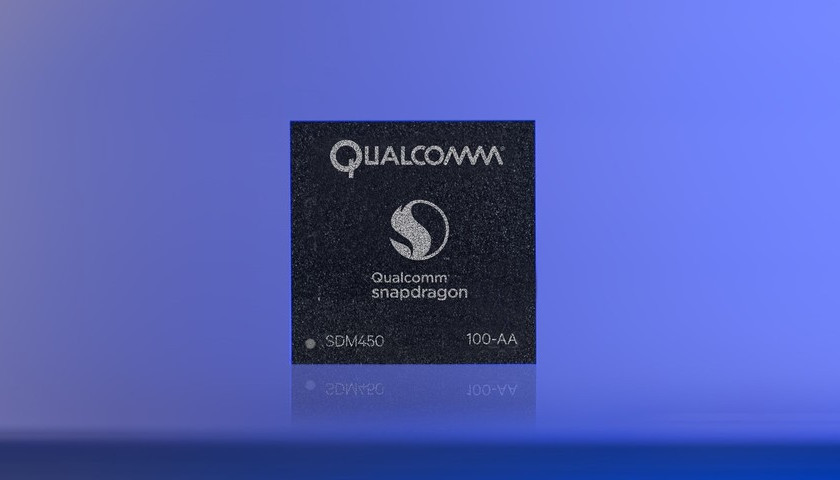 Now we come to the least capable Snapdragon series (aside from the now dormant Snapdragon 200 family), designed for entry-level smartphones. But there’s good news here, as the latest Snapdragon 400 chipset is actually a massive improvement.

The new Snapdragon 460 has a lot in common with the Snapdragon 662, including heavyweight CPU cores (four Cortex-A73 and four Cortex-A53), the same GPU, HEIF support, Bluetooth 5.1, and even 48MP multi-frame capture capabilities. The only real downside is that it’s only expected to appear in phones at the end of 2020.

Otherwise, the Snapdragon 450 and 439 are the main 400-series chips you’ll find in phones today. These offer octa-core designs based on low-powered Cortex-A53 cores, very modest LTE speeds, and unspectacular Adreno 500-series GPUs. In other words, phones powered by these chips are more likely to struggle with advanced games and everyday system performance. Their own major saving grace is that they’re pretty power-efficient owing to 14nm and 12nm manufacturing processes respectively.

The least capable chipset in the Snapdragon 400 family is the Snapdragon 429 though. It halves the core count to just four power-sipping Cortex-A53 cores, tops out at HD+ screen resolution (no 1080p here), and supports two 8MP cameras or one 16MP sensor. It’s not all bad though, as there’s still Quick Charge 3.0 support, and Bluetooth 5 capabilities. Just don’t expect triple cameras or good performance in 3D games.

The Snapdragon 400 series does the basics well enough, such as calling, social media, WhatsApp, and web browsing. But those wanting good gaming performance, the fastest charging, the latest Bluetooth standard, and the best cameras should look elsewhere.

That’s all for our Qualcomm Snapdragon SoC guide! Let us know your thoughts on the silicon giant’s portfolio in the comments.