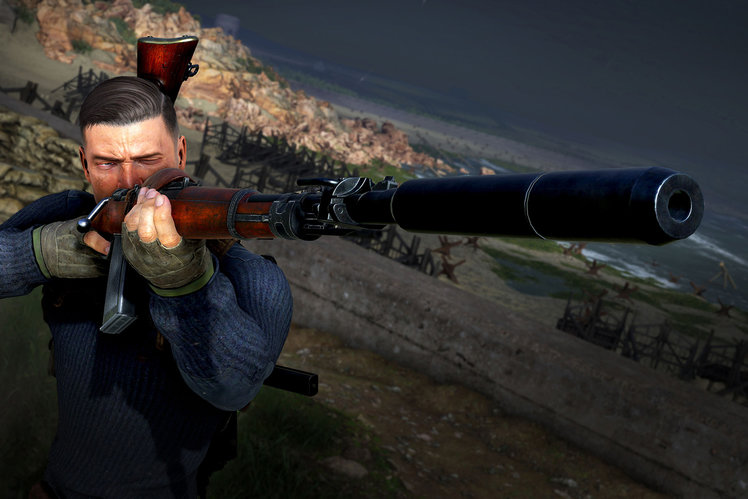 UK publisher Rebellion is a growing company, expanding into books and even TV and film in recent times. But the owner of 2000ad is also a highly experienced indie games studio, with a steady output of quality cult titles that serve a die-hard fanbase and capture a fair few new followers along the way.

There’s perhaps a no better example of this than with the Sniper Elite series – a different, distinctly British take on a third-person shooter, and one that has garnered great praise throughout its 17-year tenure. From us included.

Now, we’re about to be treated to the fifth main outing for Karl Fairburne and his highly polished weaponry, and we’ve had the chance to spend a couple of hours in one of its missions to give you our initial impressions.

While Sniper Elite 4 was set in Italy, this latest chapter takes us to France, as another major Nazi threat emerges. Fairburne makes contact with the French Resistance, and, together, they uncover and must foil Operation Kraken – or the war will be lost for the Allies.

To be honest, we didn’t learn much more of the story in our hands-on preview session, with a short cutscene and a quick explainer our only port of call before being thrust into the action.

That meant we spend quite a while stumbling upon enemy checkpoints and guard posts on our way to the goal – a chateau containing documents on the Axis operation. It generally ended in death and multiple respawns.

However, we soon got back into the swing of sneaking around and picking off enemies using silent methods, such as a suppressed pistol or knife. There was little noise cover to speak of, so using the sniper rifle generally ended in swarms of soliders rushing to our position. We also attempted at least three routes before finding one that got us the closest before discovery.

Even then, when we finally reached the manor house proper, we ended up in a good old gunfight on the outer skirt, and that gave us the best view of the enhanced kill cams in SE5.

The series is renowned for its gruesome x-ray zooms when an enemy is shot from afar, and this latest certainly holds no punches. The graphics have been tweaked somewhat between generations, not least because this will be the first game released natively for PS5 and Xbox Series X/S, so you really do get an even more visceral look at the insides of your targets before they rapidly become their outsides.

One thing we will note, though, is that Sniper Elite 5 will be a cross-platform release and, as such, the graphical embellishments for the newer consoles seem to be reined back – else the PS4 and Xbox One versions would struggle. Still, this is a fine-looking game that credits the series, and we’re eager to check out later levels for variety.

We did notice more foliage and detail than in the last game, but we don’t want to comment too much on the graphical stability, as we were playing a cloud-streamed version over Parsec. It looks nice, though, and we’ll be able to collect some more thoughts upon the game’s full release.

In with the new

As well as graphical tweaks, there are a few new features along for the ride. Weapons customisation is one, which we didn’t really get to explore in any note during the hands-on (having bludgeoned our way through the loadout screen initially). It’s certainly a welcome addition, though, as you can swap different elements of your rifle, for example, such as stock and barrel.

There’s also now the option to go into a first-person mode when aiming a pistol or SMG, which makes targeting a little easier.

Movement has more options, too, with multiple ways to climb or slide your way around the vast open-world levels. And that sums up our experience with Sniper Elite 5 at this stage – variety.

There appear to be so many more ways to accomplish your goal this time around, which not only rewards different gameplay styles, but also encourages replay. Add on the many different game modes, including up to 16-player PVP and four-player co-op in the survival mode, and it’s definitely one to keep an eye on.