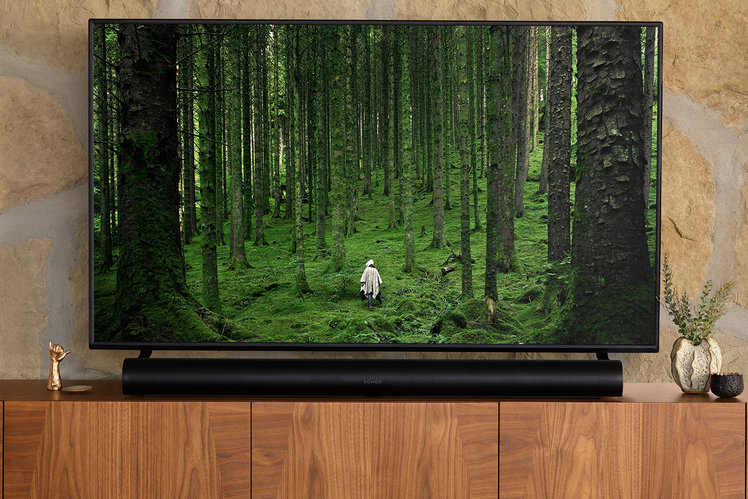 Sonos is not one for racing new products out for the sake of it. Its Playbar, for example, has ruled the roost for seven years, being its only full-fledged soundbar in that time.

The Sonos Beam arrived in the meantime, but is more meant for smaller TVs and rooms, giving you a better alternative than the speakers on your flatscreen rather than cinematic experience. So, a replacement to the Playbar is long overdue.

That’s where the Sonos Arc comes in. But it doesn’t just replace the Playbar, it brings so many new bells and whistles to the party that it is an altogether different beast. One with Dolby Atmos – a first for the company – to deliver a virtual surround-sound experience from the single ‘bar.

Putting its tech and audio prowess to one side for a minute, the Sonos Arc is a sleek looking soundbar that matches the aesthetic of the company’s One and Move standalones.

It is long – almost the length of a modern 55-inch flatscreen TV – but more subtle than its predecessor, with a plastic alloy build and grille to front and sides. Even the logo fades away when you’re not staring directly at it, whichever finish you choose (there’s black or white, nothing more outlandish than that). 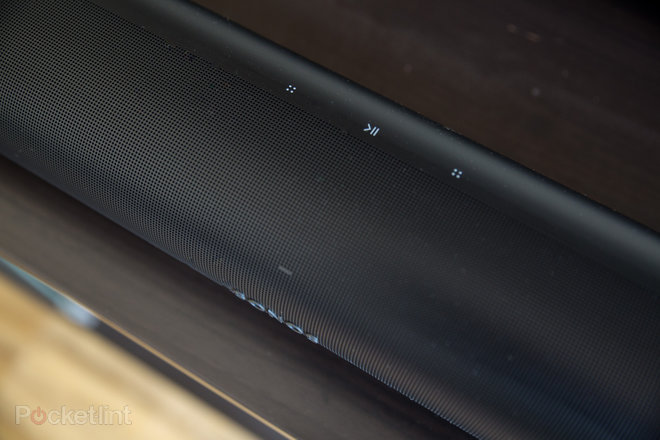 We particularly like that there are no contrasting flourishes in the design, as there’s nothing worse than catching a soundbar out of the corner of your eye while watching an intense moment in a film. Unlike children, speaker systems – and especially soundbars – should be heard and not seen. The subtlety of Sonos’ bar ensures that is the case, whether it’s wall-mounted or laid flat on a TV stand.

There are a few touch buttons on the top for play/pause and volume adjustment, but the Sonos app is so simple to use we couldn’t see ourselves bothering with them. Plus, as it is HDMI eARC-enabled, you can mainly control the soundbar through your TV remote for general use.

The only other distinguishable icon on the bar itself is a microphone symbol, indicating that it is voice-enabled, with support for both Amazon Alexa and Google Assistant. You can tap it to turn on/off the listening mode – signified by a small LED light.

Around the rear, hidden in an alcove, there are connections for power, HDMI and Ethernet. That’s it. 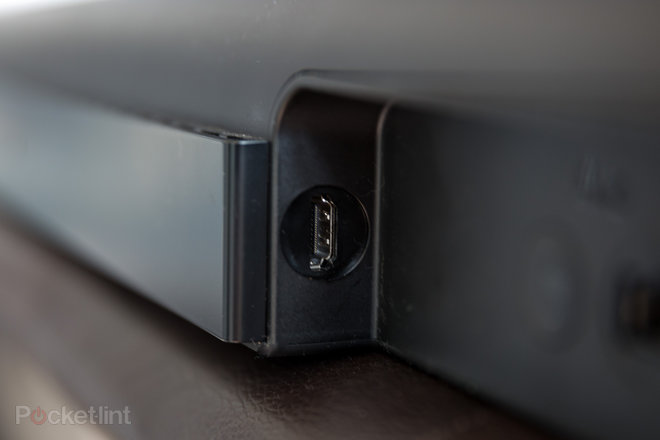 Those not wanting to connect the Arc through HDMI will be pleased to know that a digital optical audio adapter is included in the box, but that will effectively disable any Dolby Atmos support, as that requires hooking it up to an HDMI eARC/ARC port on a compatible TV. You’ll still get very effective multichannel surround sound, just not Atmos.

Also missing (if setup using the optical connection) will be the ability for full automation through your TV’s remote control. There is an infrared (IR) sensor, so you can set your remote to also adjust volume, but that’s a less elegant solution than using HDMI CEC (standing for Consumer Electronics Control) between TV and Arc. It also emits automated audio sync between them.

Still, if it’s all you’ve got then that’s fine – you’re still getting a superb sound system and are future-proofed to boot.

Plus, while there are plenty of TVs with at least one ARC-enabled HDMI port, only more recent models support Dolby Atmos decoding or passthrough. Even fewer support the full HDMI eARC standard, so it’s possible you might consider the soundbar with an eye on upgrading your TV somewhere down the line. 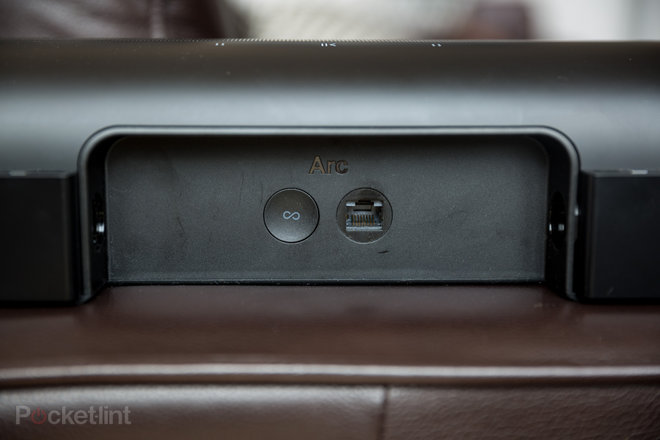 As well as 10/100 Mbps Ethernet for wired network connection, single-band (2.4GHz) Wi-Fi is available too.

As well as Dolby Atmos – which we’ll come to in a bit – the Sonos Arc is quite a step up over the Playbar when it comes to features.

Support for Amazon’s Alexa and Google Assistant is wholly welcome, for starters, implementing in similar fashion to Sonos One and Move.

The Arc has a four far-field microphone array built in that detects voice from a fair distance. We walked around a decent sized living room, even stepped outside for a moment, and it could still hear and recognise our voice.

Both services are setup through the Sonos app and, subsequently, their own individual applications on iOS and Android, so once complete act exactly as they would on any other supported device.

You can only use one assistant, having to disable the other if you swap, but it’s great to be given the choice. And, depending on Amazon and Google’s compatibility, it means you can play and control music by vocal command, across streaming services, and your own digital library.

You can also technically use your Arc to control your TV, if it too is Alexa and/or Google Assistant-enabled.

Apple AirPlay 2 is also supported by the soundbar, to present the cleanest possible audio sent wirelessly from an iPhone, iPad or Mac. And, Sonos’ Trueplay audio tuning during setup ensures that the output matches your surroundings through very simple instructions.

Of course, the Arc’s biggest, most attractive feature is that it is a Sonos speaker.

Sonos has provided an integrated, connected multiroom solution for many years, and has refined the experience over time. Today it is compatible with all the big music streaming services, including Spotify, Apple Music, Amazon Music, Deezer, Tidal, and more. There is also Sonos Radio, the brand’s own free service with ad-supported stations and curated playlists, so even if you aren’t a member of a third-party platform, you will still have plenty to listen to. 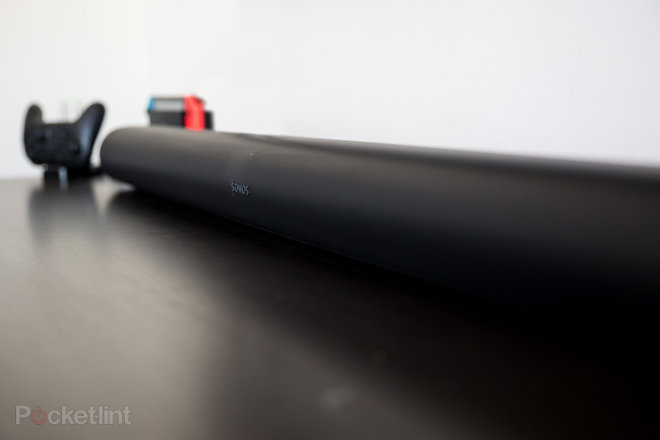 As Sonos products also connect wirelessly to each other, through your home network, you can sync the same songs playing on your Arc to, say, a Sonos Five speaker in another room, for example. You can group multiple speakers together and have them all play the same music. It’s great for house parties, that’s for sure.

Alternatively, you can use the interoperability to hook up a couple of Sonos One speakers to work as rear speakers, using your Arc as the front, centre and height channels. And adding a Sub for extra bass is made as simple as possible.

A decent feature set is all well and good, but the most important aspect of a soundbar is the sound itself. And the Arc does not disappoint when it comes to spatial performance. 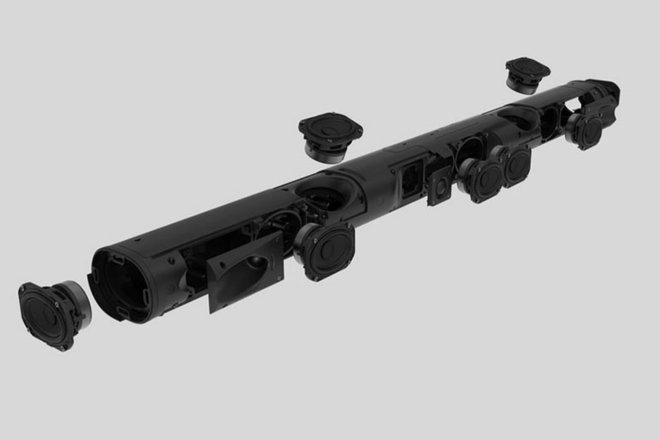 It effectively presents a virtual 5.0.2 soundfield with Atmos engaged, 5.0 when not. Dedicated centre, left and right channels provide the front-facing effects. Two other channels angled at either end of the bar provide virtual surround, while a pair of additional drivers point upwards to reflect Dolby Atmos height channels off the ceiling and back to the listening position.

There are eight woofers and three tweeters in all, each with its own Class-D digital amplifier, and when all are working in unison it presents a wall of sound that belies the simple, thin form factor.

We advise pairing the Arc with the Sonos Sub, as that will put extra growl into the bass, but we’re already impressed with the overall effect when it’s playing solo, including low frequencies.

As we’ve mentioned above, you can also add a pair of additional Sonos speakers for true rears/surrounds, but the reason why many invest in a soundbar is for its simplicity. Unless you are a true home cinema buff, you’ll already be impressed with the Arc’s out-of-the-box experience.

We tested the Arc using the latest Sonos software (Sonos S2) and several sources. We also used a Philips OLED754 TV, which has Dolby Atmos processing on board and passthrough – which we activated.

This allowed us to play a few Netflix shows that come with Atmos sound, plus several 4K Blu-rays: The Rise of Skywalker, John Wick 3 and Ready Player One. The second John Wick sequel is an especially good check disk for Dolby Atmos, with rain effects utilising the height channels throughout the first few scenes. 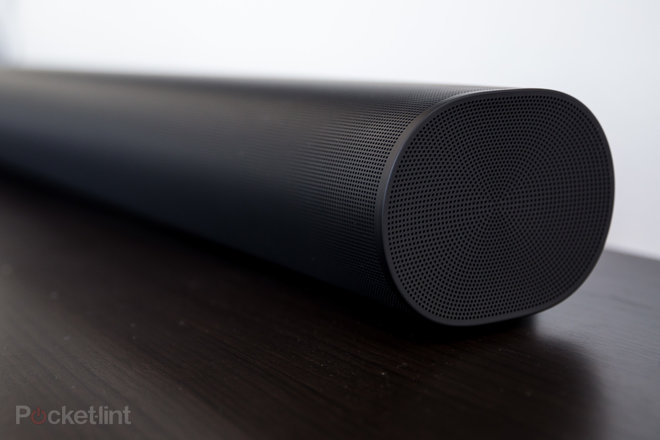 Perhaps the best test came via our Xbox One X. The Dolby Access app for the console (plus the One S) comes with a great collection of game and movie trailers featuring Atmos mixes, plus a few of Dolby’s own demo clips. They each gave the Sonos Arc a great workout, which it passed with flying colours. It provides a wall of sound, with clear precise spacing, even at extreme volumes.

When listening to the Arc you get an impression of audio above the seating position, plus a widening of the soundscape. But you also get a bold, cinematic presentation that seemingly comes straight from the TV screen. Having a dedicated centre also allows for clean vocal tracks.

In music terms, we couldn’t test any specialist Dolby Atmos tracks via streaming as this is a feature yet to be adopted by the new software – it is coming though. However, listening to high-res mixes of Price’s Purple Rain and The Rolling Stones’ You Can’t Always Get What You Want streamed over Tidal perfectly illustrated the bar’s ability with mid and high frequencies. Even bass response is more than acceptable for music playback.

You are still likely to want a separate Sub to get the most from genres utilising sub-bass – d&b and dubset heads, that’s you – but even without that additional cost the Arc’s neutral tones are a great starting point for all genres.