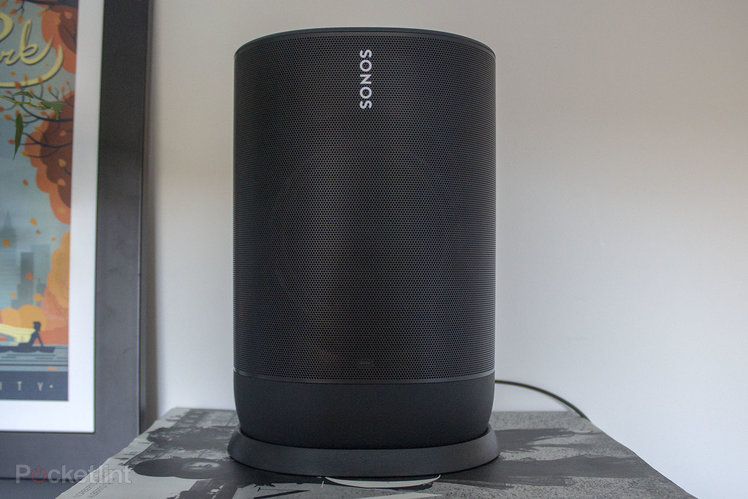 Sonos offers multiple speakers within its portfolio, but as great as they are, none had been portable, none had been water-resistant, and none had offered Bluetooth audio support. The Sonos Move, however, changed all of that.

While Sonos previously focused on offering speakers designed for the home that require mains power and use a mesh Wi-Fi network to talk to each other, the Sonos Move was the first portable Bluetooth smart speaker marking the beginning of Sonos outside of the home.

Move was first, but since its release, there is also now the smaller, and more portable Sonos Roam to consider if you’re in the market for a Bluetooth Sonos speaker. You can read our full Sonos Roam review separately, but here we are focusing on the larger, more powerful, Sonos Move.

Sonos plays close attention to design and all its latest speakers – from the 2015 Play:5 to the Sonos Arc – share similar design features, like capacitive touch controls, black and white colour options and plastic detailing. 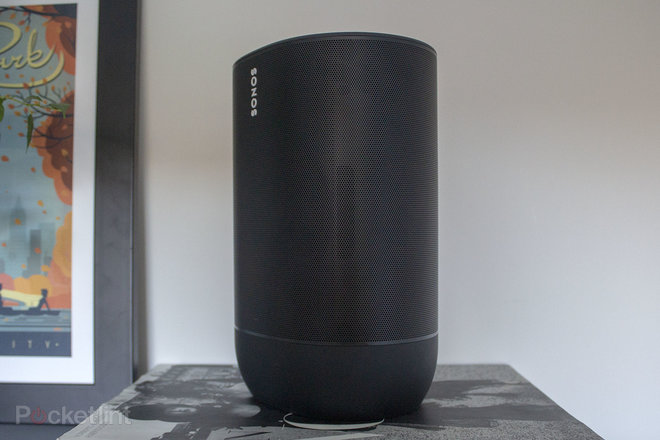 The Sonos Move has the same design ethos as these newer Sonos speakers, with rounded edges, capacitive controls and an almost identical top to the Sonos One – albeit oval shaped and with repositioned controls – but it raises the stakes when it comes to durability.

While the design of the Sonos Move clearly resembles the Sonos portfolio, it offers an IP56 water and dust resistance and it is one tough little cookie – although it’s not actually that little. Sonos says the Move can withstand pretty much every obstacle life might throw at it, whether that be sand, water or a drop on concrete, and while we didn’t fancy testing the last of those, it’s clear this speaker is able to hold its own.

To achieve this, the bottom of the device is silicone with a clear coat of paint over the top to deter dust. Everything inside has been considered, too, from a custom-made polycarbonate basket case reinforced with glass for the mid-woofer, to the colour of the Move itself – it is Shadow Black and not just plain, absorbant black to take UV exposure into account. We had it outside in 25C with the sun shining directly on it for several hours but it didn’t feel too hot as a result. There’s a Lunar White model too, which are the same colour offerings as the Sonos Roam. 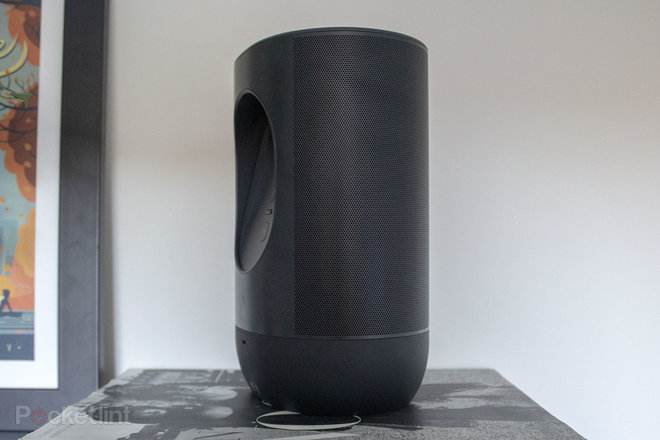 As we say, though, this portable speaker is not small. It’s wider and taller than the Sonos One and it weighs a hefty 3kg – so you’ll need a pretty decent-sized backpack to lug it around. The point is that you can bring it wherever you want, whether that’s your garden, the beach or a camping trip. At this scale we suspect it’ll be nearer to the home, for a garden party, while the smaller Sonos Roam is more suited to the park or beach.

On the rear of the Move is a Wi-Fi/Bluetooth toggle switch, a power button and a pairing button – the last of which all Sonos speakers except the Roam offer. The buttons are all positioned on an inward slant that allows for the convenient integrated handle – which is built into the design, rather than a separate strap or handle – to exist within this design format.

When the Sonos Move is on its Loop Dock charging cradle it looks like any other Sonos speaker and blends into the home. You’d never know it was portable from the front, giving it an element of surprise about it. If you’re thinking about buying a permanent in-home Sonos speaker but might want to occasionally take it out and about then we can see why this design makes perfect sense, though the same can definitely be said for the Roam too. 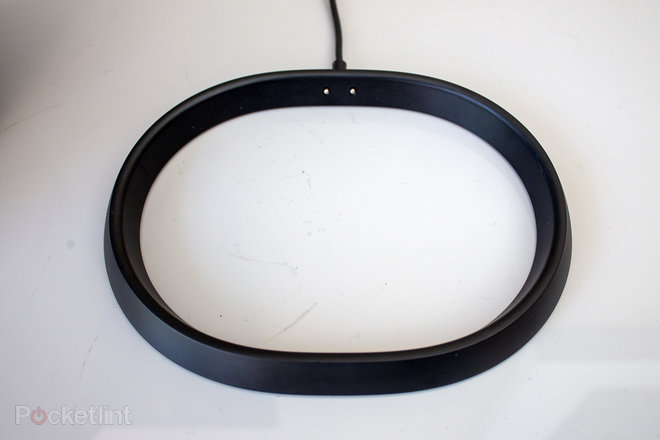 A USB Type-C port sits below the integrated handle and the buttons, as well as two charging pins below that for the Loop Dock – which the Sonos Move snaps into place on. 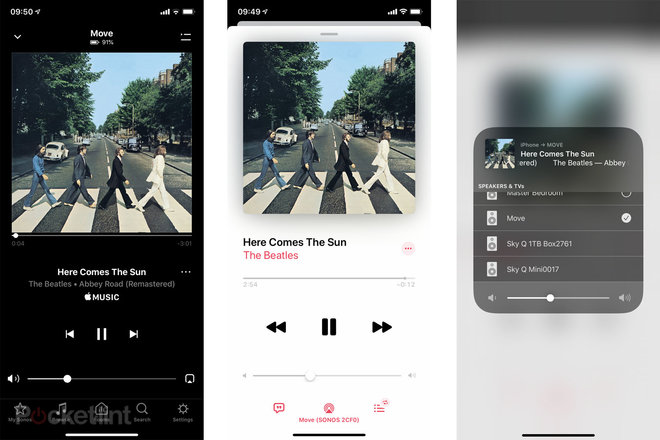 The Sonos Move also supports Apple’s AirPlay 2 – as per the Roam, Arc, Beam, One, Play:5, and the Sonos One SL (the voiceless version of the Sonos One) – which allows for easy streaming from an Apple device without the need to open the Sonos app. It’s quick, convenient and it offers Apple users integration with Siri for voice control too.

The Wi-Fi/Bluetooth toggle switch on the rear of the Sonos Move allows users to switch the speaker between modes – something the Roam does automatically. When the Move is ready to pair, the LED light on the top flashes blue then goes solid blue when pairing is successful. We paired our Apple iPhone 11 at the time of review with it in a matter of seconds and switching between the two modes is virtually instant, making it pain-free, even if the Roam does make this element more seamless. 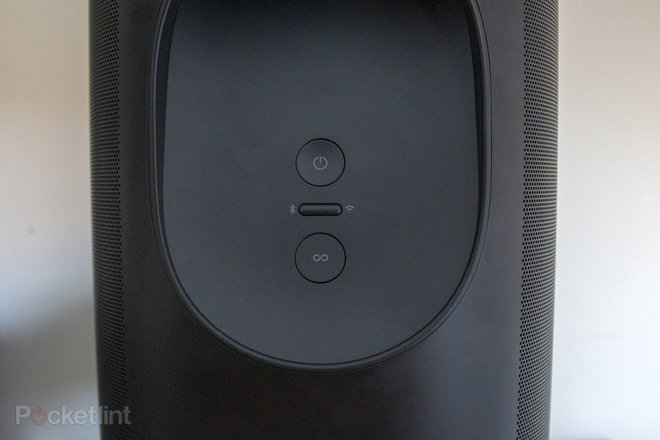 The power button, meanwhile, allows users to switch the Sonos Move off entirely, otherwise it will stay in a low power mode when not being used – useful for quick wake-up if it’s grouped with another Sonos speaker or an alarm is set, for example.

The Sonos Move functions as a typical Bluetooth speaker when in Bluetooth mode, allowing users to send music to it via a paired device, as you would the Ultimate Ears UE Megaboom 3, for example. In Bluetooth mode, the Move isn’t controlled via the Sonos app, with the control shifted to your device and the streaming service you are using instead.

Sadly, you can’t use two Sonos Move speakers in a surround setup, as you can with all other Sonos speakers except the Sonos Roam, which also doesn’t offer the feature. Read our Sonos tips and tricks to learn more about the features offered by the Sonos system as a whole.

The Sonos Move also offers a feature called Automatic Trueplay. Trueplay is a software feature Sonos introduced with the Play:5 in 2015 and it allows users to tune their Sonos speakers according to its surroundings using an Apple iOS device. You can read all about it in our seperate feature.

Automatic Trueplay uses the four built-in microphones on the Sonos Move to listen to the sound produced by the speaker and tune it automatically according to its surroundings, making for a much simpler process than the original (where you had to walk around the room waving your iOS device up and down slowly, yep, really). 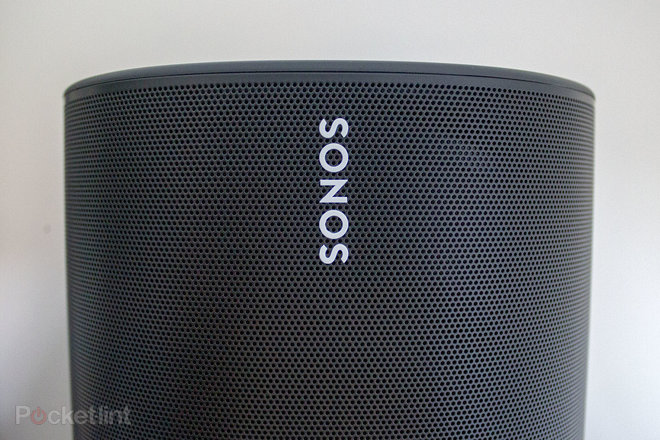 The Automatic Trueplay feature was introduced on the Move to combat the issues of moving a speaker from outside to inside and still ensuring it sounds good. An accelerometer helps the Sonos Move detect when it has been moved, allowing it to adjust itself within around 30 seconds to what it deems as the best for its new surroundings. You can turn it off in the Sonos app if you don’t want it though.

Additionally, the Sonos Move supports Google Assistant and Amazon Alexa voice control. As with the One, Beam, Arc and Roam, which offer the same control, you can’t have both assistants setup at the same time – but you will be able to switch between them as you please, as well as turn the microphone off (an LED light on the top of the Move indicates when the microphones are on). You can also choose to have Alexa on one compatible Sonos speaker and Google Assistant on another if you want.

When the voice assistants are setup, you get almost all the same features you would an Amazon Echo or Google Home or Nest speaker device, bar a couple, meaning you’ll be able to ask Alexa or Google anything you like, such as set a timer or alarm, control compatible smart home devices, or find out about your day or commute. 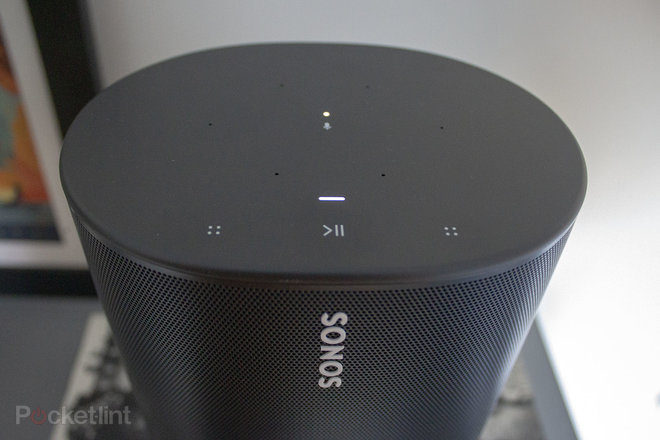 Voice control is only available when in Wi-Fi mode (AKA standard Sonos mode), but don’t mistake this for only when docked on the Loop Dock. For us, we get Wi-Fi in our garden at home and therefore we could use Google Assistant on the Move in the garden during a BBQ with friends, which was great.

The Sonos Move has a downward-firing tweeter at the top of the speaker, coupled with a mid-range woofer inside. For those wondering why the company has used a downward-facing tweeter, Sonos told us it was to achieve evenly dispersed sound; there’s what the company calls a Wave Guide inside to enable this to happen. 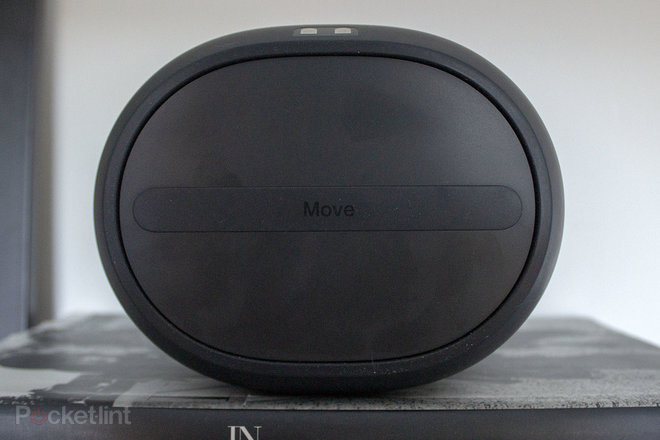 Based on our experience at review and continued experience, the Sonos Move offers a great sound quality for its size and the sound is evenly dispersed. It’s on the bassy side, which is typical of Sonos speakers, but we see that as a good thing compared to other portables that can’t deliver in this regard.

There’s plenty of volume too – which you definitely need when outdoors – and the Move copes well with mid-range, treble and vocals. You don’t get as wide a soundscape as per the Play:5, but the Move sounds better than the Sonos One to our ears. That gives you an idea of its positioning in the range. It’s also more powerful than the Roam, which you would expect.

Sonos claims the battery will deliver 10 hours of music playback. We had the Sonos Move outside on Wi-Fi, on mid-volume for four hours and we only managed to drain the battery to 80 per cent, so we suspect this figure is based on use at louder volumes, thus you might get more out of it. 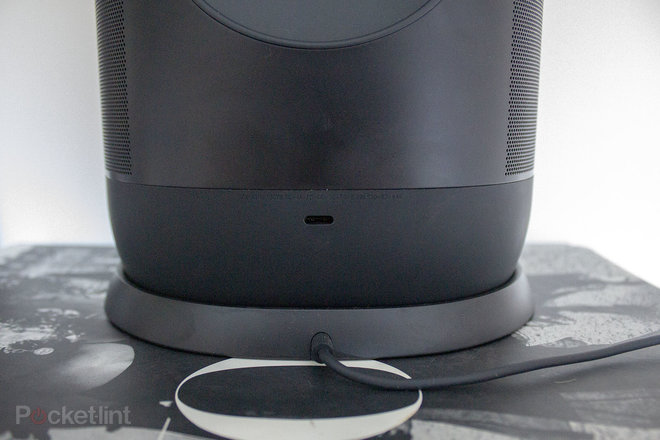 The battery can be replaced too – it will last around 900 charging cycles, which is around three years on average – after which it is recommended to replace it to continue to get longevity out of the device. Sonos offers a battery replacement kit that allows you to do this yourself.