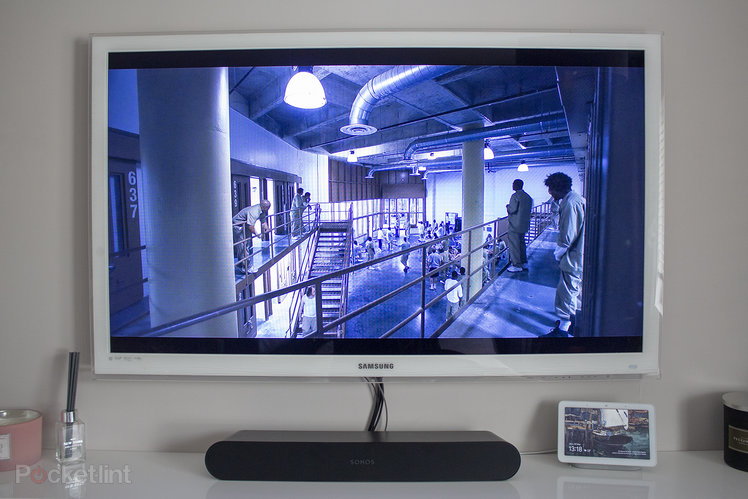 Sonos already had the top-end Sonos Arc and mid-range Sonos Beam (2nd Gen) for soundbar searchers to consider. Now, the Sonos Ray has joined the portfolio.

It’s the first option at the budget end of the scale we’ve seen from the company. And while all three share similar design language and feature sets, the Ray does naturally miss out on a couple of things.

Do you compromise too much by opting for the Sonos Ray, or could this compact, entry-level soundbar be just the addition you need to your home? Here’s our verdict.

The Sonos Ray takes design cues from the rest of the company’s portfolio, offering black and white colour options, a Sonos logo in the centre of the speaker grille and a sleek and premium build quality overall. 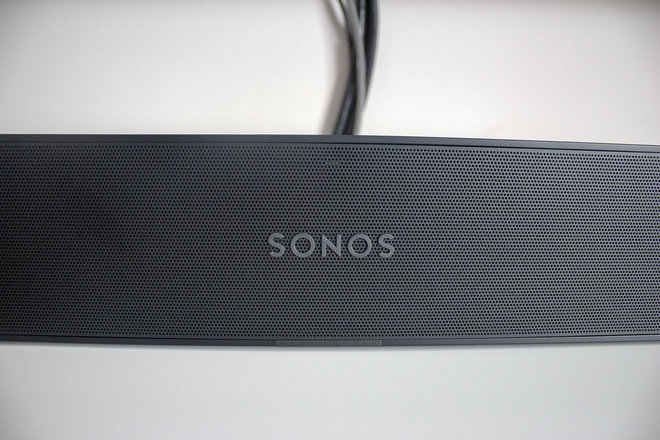 It’s small and compact like the Sonos Beam – more compact, actually – but it features angled sides and the speaker grille is only present at the front of the Ray, rather than wrapping around the sides and the back like the Beam and Arc. That small size, and the fact that only the front needs to be exposed, means you can tuck the Ray within a TV cabinet shelf, for example, though you can also opt to wall hang it or place it on top of a shelf, say.

If you have a large TV, the Ray does look a little out of place alongside it – whether it’s hung on a wall or sitting on a cabinet beneath. You need a TV that is smaller than a 55-inch, really, else it looks a little lost. We tested it with a 47-inch TV, and it looked great with that size.

There are small rubber feet at the bottom of the Sonos Ray, like the other Sonos soundbars, and there’s also a small cutout in the centre at the bottom for the IR sensor, allowing you to use your TV remote to control the volume. 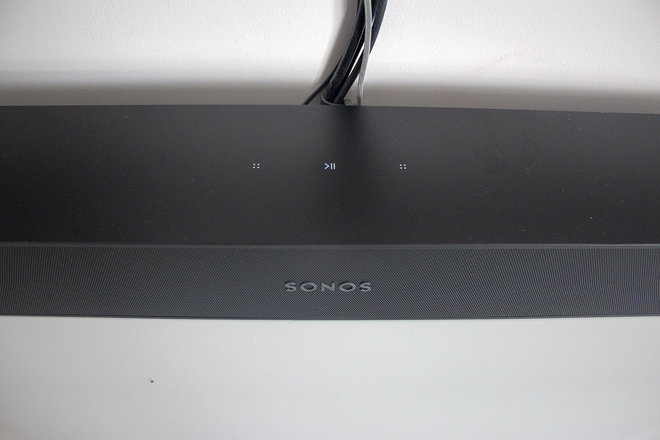 On the back is where you’ll find the usual ports, connections and pairing button. The Ray opts for optical only, though, so there’s no HDMI – more on that below – and you’ll find it next to an ethernet port and power socket. On the top of the Ray are the same capacitive controls that feature on the Beam and Arc, with an LED light sitting within the speaker grille at the front to indicate the status of the Ray.

The Sonos Ray looks great overall, in our view. Although it’s the cheapest soundbar in the company’s lineup, it by no means looks like it. You might compromise on a few features, but you don’t compromise on build quality or design, so Sonos fans won’t be disappointed on that front. 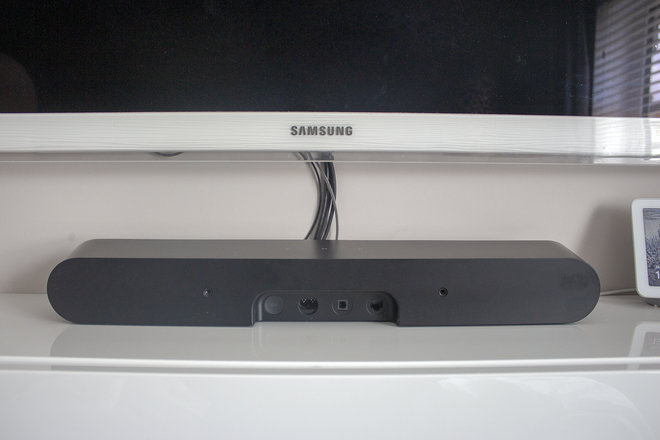 There’s also no microphone here, so you don’t get access to Google Assistant or Amazon Alexa support, and the Ray doesn’t natively offer support for the Sonos Voice assistant, either. That said, you can still control the Ray through another Sonos speaker that does have Google Assistant, Amazon Alexa or Sonos Voice (like the Sonos One, for example), or a third-party smart speaker like the Amazon Echo.

Aside from those missing features, the Ray does everything you would expect from a traditional Sonos speaker. The beauty of Sonos soundbars is that they don’t just enhance your TV sound, but they work brilliantly as standalone speakers when the TV isn’t on, too, so you get two-in-one.

The Ray also offers features like Sonos Trueplay, allowing it to tailor the sound specifically to the room it’s in – well worth the three minutes it takes to complete – and there’s also support for over 100 music streaming services, as well as Sonos Radio. 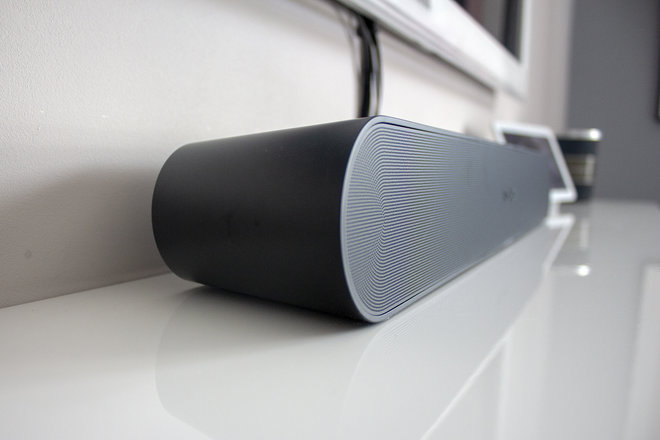 Other standard features include the ability to adjust the equaliser (EQ) settings to suit your preferences, play different or the same music across various Sonos speakers at the same time, as well as set alarms.

There’s support for Apple AirPlay 2, as well, and a couple of extra functions, like Speech Enhancement and a Night Mode feature. The Ray also has NFC onboard for super quick setup, which means it’s a matter of minutes to get it working with your TV and the Sonos app. It’s very much a plug and play soundbar, especially thanks to the optical connection.

The Sonos Ray has a pair of mid-woofers, a pair of tweeters and split waveguides that project the sound wall-to-wall, with one projecting out of the front and the other out to the side. There are also Class-D digital amplifiers under the hood and a bass reflex system. 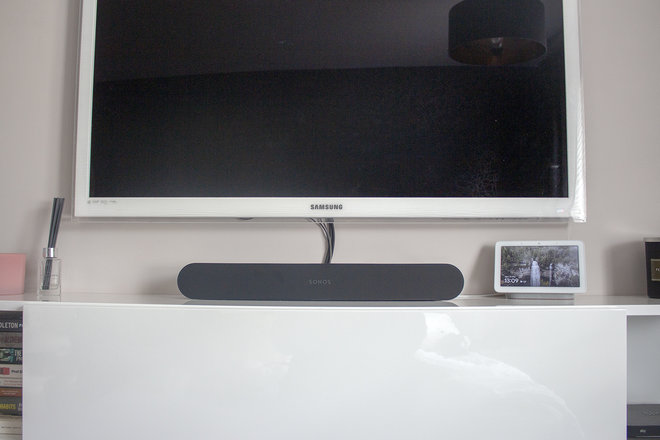 As we mentioned up top, all the acoustic elements are set across the front of the Sonos Ray, rather than wrapping around the sides. This results in a soundstage that isn’t as wide or impressive as its siblings’, with the sound emitted from the Ray being much more direct. That’s not to say the Ray doesn’t still sound great for its size and price, though.

As the Beam does, it struggles a little at lower volumes, but the three speaker array still does an excellent job at enhancing a TV’s sound, as well as performing brilliantly as a standalone speaker, too.

We tested the Sonos Ray by watching some standard shows, like the Bold Type and The Staircase, but we also watched a couple of films, including No Time To Die, and the Ray really enhances the action scenes, whilst doing a great job at delivering speech with clarity. 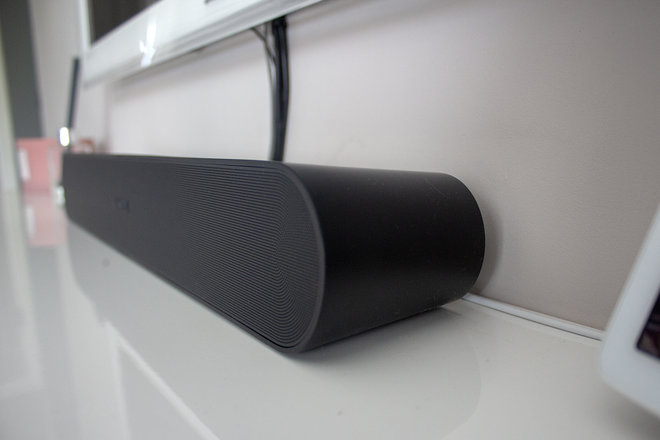 In terms of music, we tested the Sonos Ray with plenty of tracks, and it does a great job overall. It will easily fill a medium-sized room, and it copes equally well with high voice tones as it does with low bass frequencies. While we’d recommend stepping up to the Beam for a proper living room setup, the Sonos Ray provides enough punch for a secondary one.

Add a couple of Sonos One or One SL surrounds and the Sonos Sub to the Ray and you’ll be very pleasantly surprised by the experience this compact soundbar is able to deliver.