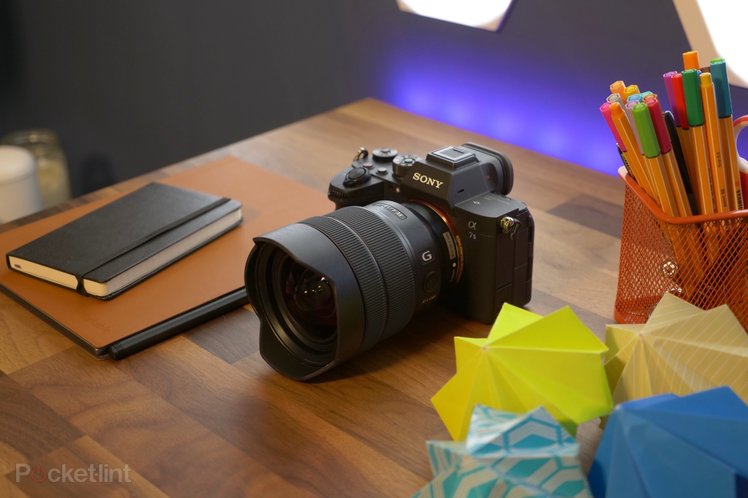 Sony has grown a legion of fans for its growing number of Alpha system cameras. Whether it’s the ultra compact A6000 series or a full-frame A7 series, there’s something for everyone. But it’s videographers who’ve turned more towards Sony’s mirrorless full-frame bodies in recent years – and it’s easy to see why when looking at the Alpha A7S III.

Spec wise, this third-generation ‘S’ model offers some incredible capabilities, with particular focus for video and low-light performance. Rather than go all-out on the pixel count, the A7S III opts for bigger pixels on a quality sensor. But does that limit its appeal?

Sony was among the first manufacturers to put a full-frame sensor in a compact mirrorless body (the original A7, from back in 2013, was revolutionary for its size). And while many manufacturers have since followed suit and Sony – with its own A7C – has made an even smaller one, the size of the A7S III makes it hugely practical to carry around. It’ll fit into most camera carriers, even with a lens on it. 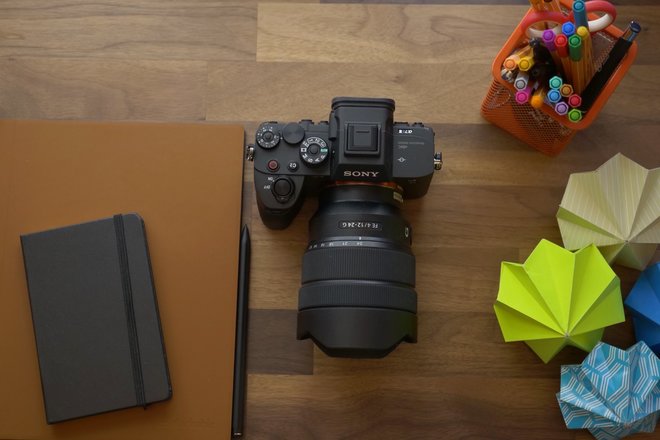 The body weighs about 700g with a battery and memory card in it, but – of course – that weight goes up once you attach a lens. We were testing with the 12-24mm G Master lens, which is pretty bulky and weighty, but not so much that we got really tired from shooting with it handheld.

A lot of the A7S III’s buttons are well positioned, including the switch-ring around the shutter button at the top of the grip. There’s a dedicated red movie ring for shooting video, plus an exposure gain adjustment ring, a custom function button, and the shoot mode select dial.

The shoot mode dial has to be unlocked by pressing the button in the middle before turning, which adds a bit of security, but also frustration if you’re used to just turning the dial to quickly change between movie mode and one of the photo modes.

The other questionable decision is the position of the menu button. Most buttons on the back of the A7S III are within easy thumb reach. But not the menu button. That’s way off to the other side, on the left side of the viewfinder, meaning you have to use your other hand to dive into the menu system to adjust and change features and settings. 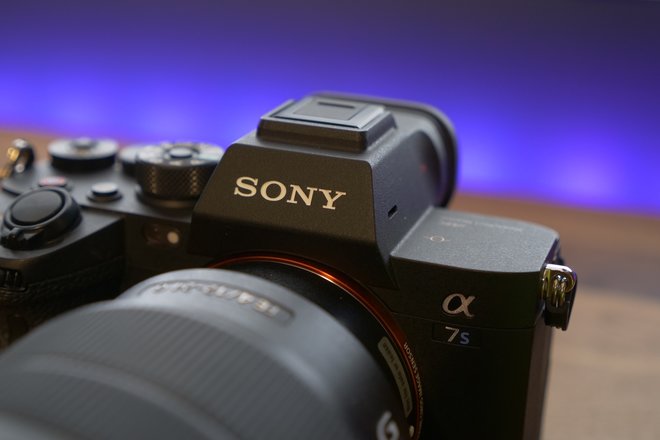 There are plenty of customisable function buttons. Four, in fact, which are super useful when you want quick access to essential functions like changing the autofocus area or changing the white balance. Having that autofocus selection mode is super useful, especially if you want to use the joystick to manually pick a small area to focus on. Just for those times when the super smart autofocus engine doesn’t quick pick the right area.

Like a number of Sony’s recent cameras, the A7S III has a proper flip-out touchscreen too. It makes that little monitor way more useful and versatile. It enables better framing at awkward angles and – as importantly – makes shooting to camera easier whether handheld vlogging or when shooting with the camera on the tripod. You can focus and frame without having to go behind the camera or having your view obstructed like on the older models.

If you’re just starting out making video, it’s unlikely you’d look at the A7S III right away, especially as the price point is enough to make your eyes water (it’s several thousand at launch – and we doubt that’ll drop much). But for the seasoned pro or someone wanting to up their game, it’s easy to see the appeal.

It may not look like it from the outside, but there’s a tonne of flexibility here when it comes to connecting additional gear like microphones and monitors. Not only do you get a 3.5mm input for microphone, the hotshoe with the right adapter attached (note: sold separately) can be used to power an XLR adapter for plugging in ‘proper’ microphones too. 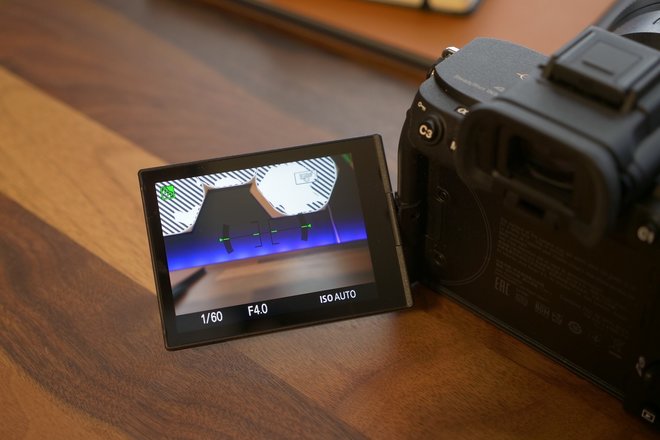 Using the HDMI you can connect the A7S III’s output to an external recorder/monitor (with 16 bit Raw output), plus you have the ability to record proxy files simultaneously while capturing at your desired resolution and bitrate. That means your computer workflow load times should be faster, because you already have the proxies to hand, your desktop shouldn’t have to generate them for you.

That’s without listing all the bitrate, colour profile, resolution and frame-rate options available. And there are many (it’s worth having a look at Sony’s detailed breakdown in the A7S III’s full specifications). You can shoot in S-Log3, S-Gamut3 or Cine gamut profiles, so that your video matches the colour profile on your professional camera and allows you to colour grade it to your heart’s content, including the ability to shoot in HLG for HDR workflows.

Sony has equipped the A7S III with a 12-megapixel sensor, which is in stark contrast to the much higher resolution 61-megapixel full frame sensor on the A7R IV. The reason: to feature enough pixels to effectively capture full 4K resolution video, but also to enable much better low-light performance. The bigger the sensor diodes (in effect the ‘pixels’), the more light it can draw in. And it works.

Shooting in tricky situations with little light, using mostly street lights outside after sundown, still enabled us to take decent, sharp images completely handheld. Of course, part of this is down to the built in 5-axis stabilisation – which is great, but not infallible, so if we didn’t quite hold the camera steady enough then some images still came out with a little blur.

Switching the camera into auto mode, the default in our night time shoot was for the camera to select ISO 12,800 – which is rather high – but the sensor still managed to capture an impressive amount of range (at f/4 and a 2/5-second exposure), revealing the clouds in the sky and even silhouettes of hills miles in the distance. It’s not completely image-noise-free, but the results are more grain-like, at an acceptable level, and doesn’t result in the destruction of detail.

Testing with the 12-24mm G Master lens also meant we got to try one of Sony’s most recent wide-angle lenses. It’s not the most versatile lens in the world, but we found it more than usable for our regular close-up product shooting for our YouTube channel. It did struggle to focus when too close, but otherwise is a great tool to have in the studio.

Being able shoot practically unlimited 4K/50p footage meant we never had to worry that the camera would overheat. The redesigned heat dissipation inside the body means the A7S III never struggles – which is a step change from earlier Sony video-focused cameras. The result is smooth, sharp and detailed video with great colour. Rolling shutter seems to be a thing of the past too.

Further helped by that stabilisation – which introduces a 1.1x crop, but can be switched off for full-frame access – it’s easy enough to shoot handheld and keep things smooth and steady. For the times it gets a bit janky when our hands weren’t as steady as we’d like them to be, the resulting shakiness was minimal and easy to fix in post-production with Final Cut’s one-click stabilsation tool.

And for those times where we’d accidentally over-exposed and ended up with highlights that were overexposed, we were able to drop those brightness levels down for to retain detail and surface texture without any hassle. It’s a very forgiving camera.

For those of you who don’t shoot much beyond 60 frames per second, but need 4K for detail and 10 bit for colour grading and detail, the A7S III is more than capable, although the highest bitrate and frame-rate recording does require you to use Sony’s new CFExpress Type A card (also known as XQD). The rest can be recorded internally on UHS-II SD cards.

While it might not be the perfect camera for those looking to creat big, high-resolution images that are great for cropping into, the A7S III still takes great shots in daylight too. Colours are lovely, the depth of field on offer is sublime. Close-ish shots of plants revealed some stunning smooth bokeh.

Battery performance is strong for a camera this powerful too. It uses one of Sony’s new FX100 batteries – which is good for about 510 shots or 80-95 minutes of video recording, depending on whether you use the viewfinder or LCD monitor. Plus, you can charge it via the USB-C port on the camera, so you could take a Type-C cable and a battery pack to refill while on the move.

Sony’s strength for the past couple of years has been autofocus and tracking and – until the recently announced A1 – the A7S III was the epitome of that effort. It has 759 phase-detection AF points, meaning almost the you can select to focus pretty much anywhere within the frame. What’s more, it combines with 425 contrast detection points, making focusing really quick and accurate. 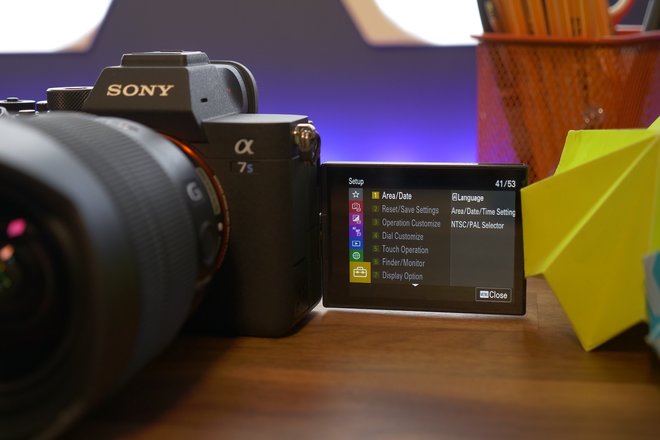 Whether we left it to automatically focus on people’s or pet’s eyes, or manually chose the spot we wanted to focus on, it was really quick and tracking was so smooth and responsive we rarely saw it hunting when we took video footage into the edit suite. It does it with such efficiency pretty much all the time.

Digging into the settings you can choose whether you want it tracking a human eye or an animal eye, or whether you want to prioritise a specific eye, or to let the camera decide (it’s actually pretty clever and will choose whichever is closest by default, and does so without fail).

There are a lot more options in the settings menu, and while colour coding and reorganising things has made Sony’s software easier than it used to be, it can still be a bit overwhelming at times. There’s just so much there to get a handle on. You could easily spend an hour just going through the various options and trying to remember where it all is.