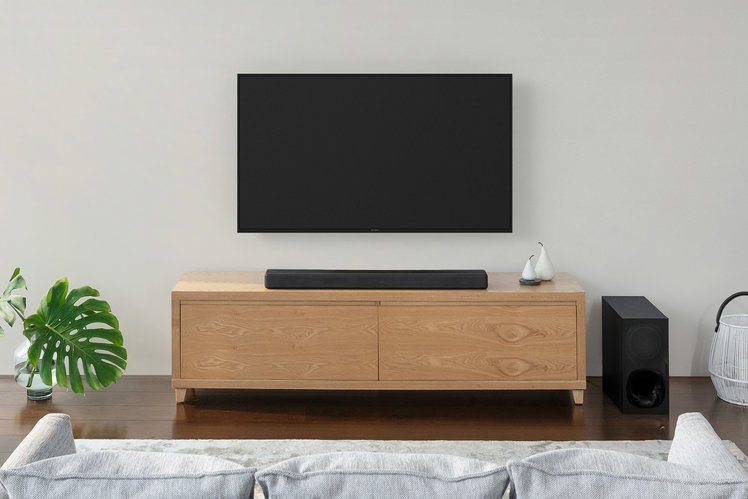 ‘Dolby Atmos’ is appended to so many products now – from TVs to smartphones – that it’s maybe worth reminding ourselves what ‘true’ Dolby Atmos is all about. It’s an object-based audio format, designed to offer height as well as width and depth to a soundfield. So if you’ve been to a Dolby Atmos cinema then you know the remarkable sensation of sound moving above you, as well as from behind or from alongside. It’s about matching audio movement to video movement as accurately and convincingly as possible, thus immersing you even more fully in the action.

In the home, of course, putting loudspeakers in the ceiling of your TV room can be problematic – which is why so many Dolby Atmos-enabled products settle for attempting to deliver the impression of overhead sound. This is almost always by using your ceiling to reflect sound fired upwards towards it – and so soundbars like Sennheiser’s Ambeo and Sonos’ Arc, and TVs like Panasonic’s HZ1500 OLED, feature upward-firing speakers in an attempt to bring some sensation of height to your home cinema sound.

But just because a product says Dolby Atmos somewhere, that’s no guarantee at all of truly immersive sound. All it means, really, is that the product is capable of accepting and deciphering a Dolby Atmos signal – and a Dolby Atmos signal can be upscaled as far as 24.1.10 (24 surround channels, one subwoofer, 10 overhead channels) or downscaled all the way to mono (one speaker).

Really, what do you want from the design of your soundbar’n’subwoofer combo? A ‘bar that doesn’t get in the way of your TV and a subwoofer that’s wireless so it can be parked out of the way somewhere convenient, right? And in the HT-G700 that’s exactly what Sony has delivered – so that’s a big fat tick in the positives column.

At less than 6.5cm high, the soundbar isn’t about to foul the bottom of your TV screen (unless it’s one of those daft designs that sits very low on its feet). At a touch under a metre wide, it doesn’t look too big under TV screens of less than 50-inches and it doesn’t look lost under bigger screens (until they get up over 65-inches). The soundbar’s hard plastic chassis doesn’t feel all that luxurious when compared to, say, Harman Kardon’s similarly priced Citation Multibeam 700 – but then a hard plastic chassis doesn’t tempt cats into using your new soundbar as a scratching post, as they inevitably must with the Kvadrat wool-clad 700.

The subwoofer’s no more indulgent to the touch. But then most people will be keeping it out of sight, so the rough exposed particle-board at the rear actually makes a little more sense than the glossy black surround of the reflex port below the driver at the front.

There are two cutaways at the back of the soundbar. One is occupied by a figure-of-eight mains connection, the other with a digital optical input, USB input (for firmware updates only), and a couple of HDMI sockets. The sight of both HDMI in and HDMI out is very welcome, especially as the output is eARC enabled. 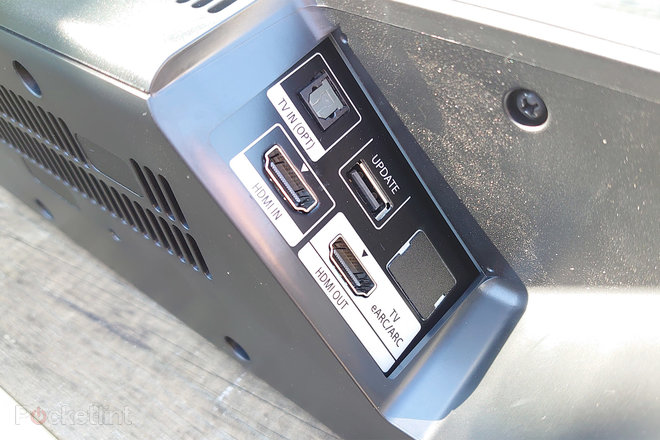 So getting audio information on board the Sony is straightforward enough. Once it’s there, it’s decoded and served to three full-range ‘racetrack’ drivers – they’re elliptically shaped (45mm x 100mm) and are charged with delivering the entirety of the frequency range from the very top down to where the wireless subwoofer takes over. Each receives 100 watts of Class D amplification, which in any domestic situation ought to be adequate.

What the Sony doesn’t feature is any kind of upward-firing source of sound, nor any angling of its drivers to attempt to extend the width of its sound. Instead of using physical means to give the impression of surround-sound – and Sony claims the HT-G700 can mimic a full-on 7.1.2 Dolby Atmos set-up – it’s relying on digital sound processing to extract the sensation of seven surround channels, plus a couple of overhead channels, all from three forward-facing drivers.

And this is where Sony starts to pile on the florid language a little. ‘Immersive AE’, for example, is actually a combination of Sony’s ‘Virtual Surround Engine’ and ‘S-Force Pro Front Surround’ technologies – and it’s ‘Immersive AE’ that intends to add virtual height and width to the sound coming from the soundbar.

The subwoofer, of course, has a much easier time of it. It too has 100 watts of Class D amplification on board, but after that it’s basically just a 16cm bass driver (augmented by a forward-facing bass reflex port) designed to fill in at the bottom of the frequency range. And, of course, no home cinema enthusiast ever paid any attention to where the low frequencies are coming from – they just want to hear (and, ideally, feel) them. 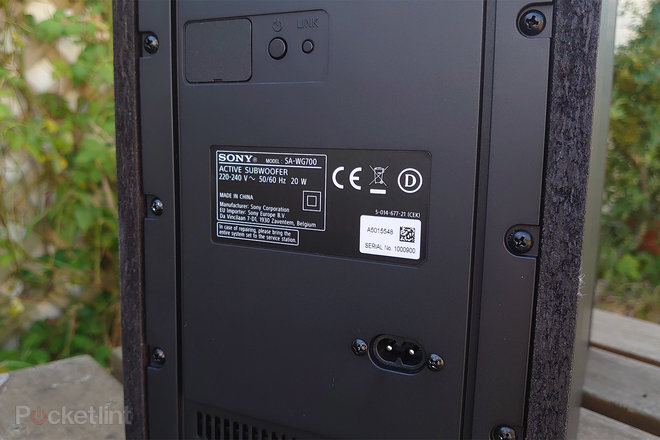 As far as music is concerned, there’s the opportunity of using Bluetooth 5.0 connectivity as well as the physical inputs. AAC is catered for, so Apple iOS devices can join in, but strangely there’s no aptX or, even more strangely, no sign of Sony’s proprietary LDAC codec for higher-end streams.

This is not a smart speaker. It’s not even mildly intelligent. There’s no Wi-Fi, no Ethernet socket – so there’s no network compatibility and, as a result, no control app or voice control. What there is, though, is a full-function remote control that covers every eventuality. 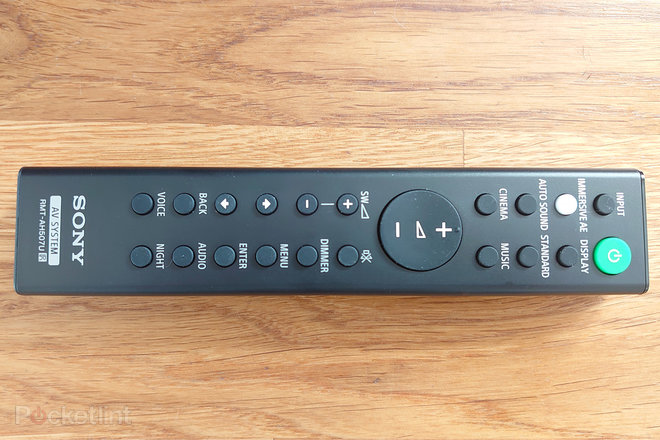 The HT-G700’s setup menus are narrower and deeper than is ideal, but the handset is logical enough to make navigating them reasonably straightforward. Happily, the ‘volume up/down’ rocker is front-and-centre – and every other control is arranged in a pretty clear manner. Really, about the only thing that’s missing is some backlighting for when you’re enjoying the full lights-down home cinema experience.

There’s also an extremely brief dot-matrix display on the front of the ‘bar, just to the left of centre. Have the patience to wait for it to scroll and it’s easy enough to ascertain what the Sony is up to.

At this sort of money, it’s not enough for the HT-G700 to offer a worthwhile upgrade on the sound from your average television – it’s just a jumping-off point. But, happily, the Sony clears this first hurdle, and in decent style. 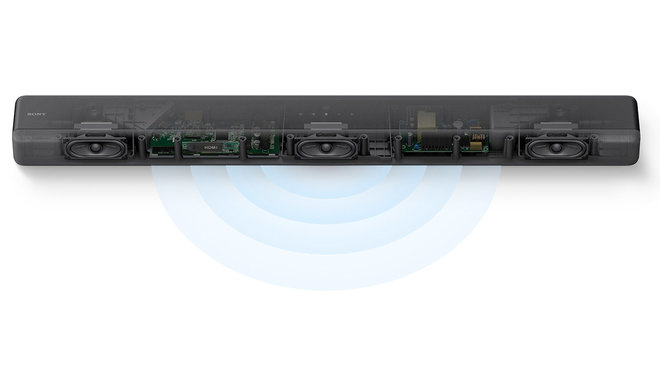 It’s altogether a more forthright, beefier and more dynamic listen than pretty much any TV that doesn’t command a premium price because of its upgraded audio system. There’s far greater scale of sound than any mainstream TV can muster, greater presence and much more low-end activity. If all you want a soundbar for is to make your TV sound impoverished, the Sony can do that for you.

Mind you, any half-decent soundbar can do this too. And it’s not as if the Sony is a flawless performer. There’s something of a disconnect between the soundbar and the subwoofer, a definite concavity in that area of the frequency range where the handover takes place. The subwoofer itself is quickly revealed as rather monotonal, with little inclination to differentiate between low-frequency information – it’s short of detail and texture, and so just thumps along. At least it’s decently rapid while it does so, though.

The soundbar, meanwhile, isn’t perfectly sorted when it comes to tonality – those full-range drivers deliver the highest frequencies a little edgily, and the louder you play the harder that top-end becomes until it’s bordering on abrasive.

And when you line up some Atmos content – a Netflix Dolby Atmos/Dolby Vision stream of Taylor Swift’s Reputation Stadium Tour, for example – the Sony struggles to make good on its claim of ‘cinematic surround sound’. There’s no doubt the sound it presents is considerably larger than the soundbar it’s coming from – it’s altogether taller and wider. But though Sony’s website suggests you’ll hear ‘sound from all directions’, that’s simply not the case. 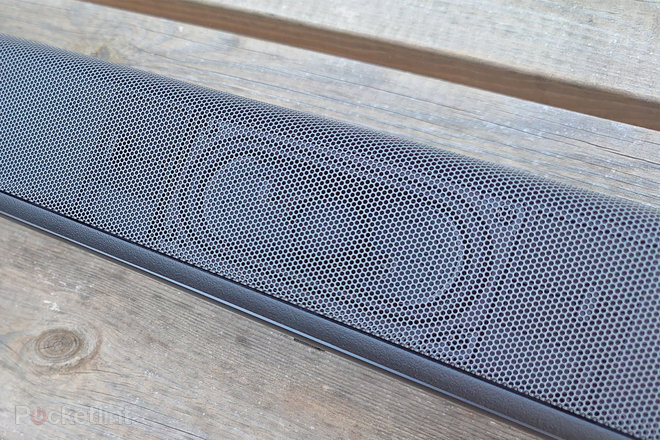 Everything that happens, happens in front of you. There’s scant suggestion of surround sound, let alone an overhead element. Effects are steered quite markedly across the front three drivers, the additional width to the sound is always welcome, and the middle driver does good work with centre-channel information: dialogue is brisk, coherent and easy to follow. There’s a good level of detail to the Sony’s presentation, too.

Switch to music, switch off all the fancy-pants processing to give the HT-G700 a chance of delivering a convincing stereo sound, and there’s quite an enjoyable directness to the way music is presented. The Sony has the advantage of any number of similarly priced soundbars when it comes to staging and focus, but its uneven tonality is never far from being its defining characteristic.