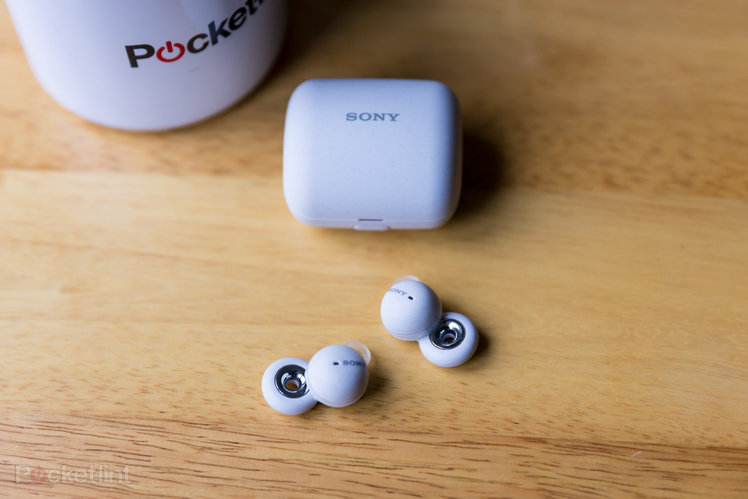 Since the advent of stable, low latency Bluetooth we’ve seen multiple form factors when it comes to headphones and, specifically, earbuds. There have been neckbands and true wireless earpieces of all shapes and sizes. However, they all share something in common: they are each designed to block the outside world to present the best isolation with which to enjoy your music.

Not so the Sony LinkBuds. These are primarily designed to let external noises in; for the wearer to be constantly aware of their surroundings. They are anti-active noise cancelling (ANC) earbuds, if you like, offering the opposite to others on the market, such as the Sony WF-1000XM4 earphones, by leaving a gaping hole where a traditional bud would plug into your ear.

Beyond the initial “eh?” reaction we’ve warmed to the idea of LinkBuds. In fact, having tested them for a period, we even found ourselves fond of the concept.

Part of the reason is that they seem perfectly suited to the new form of working in which many of us have found ourselves. 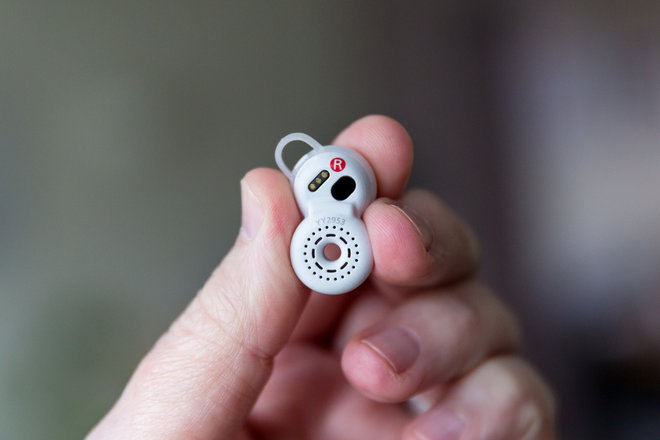 The LinkBuds are extremely light and comfortable in the ear, so capable of being worn for long periods. You can just leave them in your ears as you go about your daily business, which is ideal for hybrid or home working, running or any other activity where you need to hear the world around you.

The comfort comes because they do not have an eartip like conventional buds. Audio comes via an open driver design, with minute holes around a ring that project sound into your ear just by being placed in the inner lobe. A small silicone “fitting supporter” nestles in the top part of the ear to keep each bud in, but that’s as intrusive as it gets.

There are multiple supporter sizes in the box, so you can chop and change to find the best that fits you. We found a combination of two sizes (a different one for each ear) worked best for us. It meant the LinkBuds stayed in our ears at all times, including when walking, light jogging or even rapid head shaking (not a sport, but always a good test).

Each earbud weighs just a fraction over 4 grammes, so you barely even notice they are in. They are also made from matte plastic derived from old car parts (far more comfortable than that description may suggest) so are as environmentally responsible as they are practical. Both are IPX4 rated for water, sweat and dust proofing. 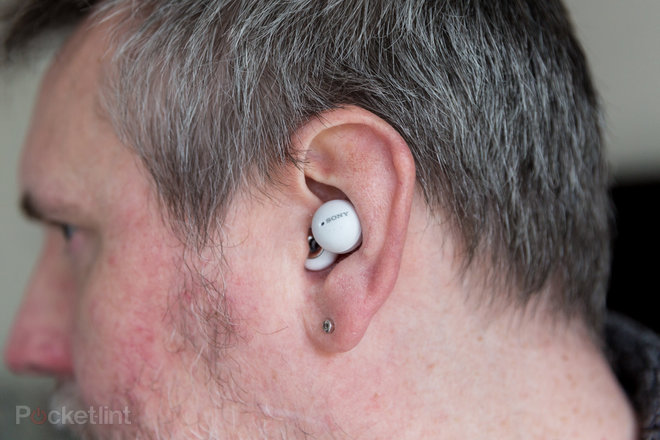 As well as the open ring driver, each LinkBud sports a wearing sensor and battery charge point. The charging case is equally small and neat – considerably smaller than most we’ve seen to date – and also made from the same recycled materials.

As with Sony’s other true wireless headphones, setting up the LinkBuds is simple.

They support Google’s Fast Pair and Microsoft’s Swift Pair technologies, to easily pair to Android devices and Windows PCs respectively. We had no trouble recognising them on an iPhone 13 Pro Max too. 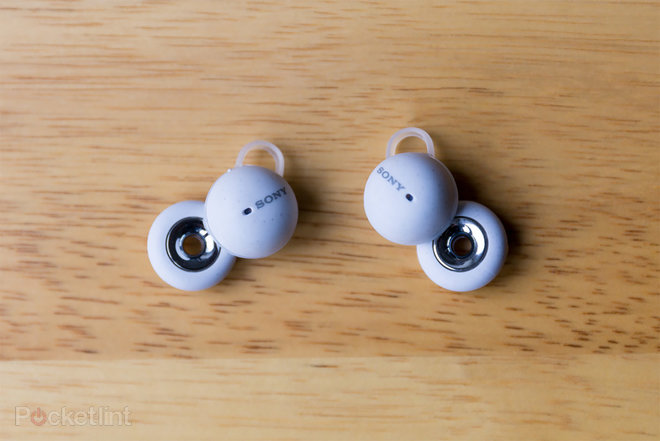 The Sony Headphones app then takes over the hard work, first analysing your ear shape and optimising the experience for 360 Reality Audio tracks provided by several different providers.

The app also updates the firmware, if needed, and presents several different features, including an equaliser (EQ), the ability to switch the Bluetooth connection between prioritising stability or sound quality. There is also a slider for DSEE, Sony’s proprietary upscaling technology that makes lesser bitrate tracks sound better. Some might prefer cleaner, untouched audio, but we have to say that DSEE improves the output for us.

Other options in the app include adaptive volume control. Although there is no adaptive or active noise cancellation, if you engage automatic volume control the volume will raise and lower depending on the ambient noise around you. Music will get significantly louder if you are on a busy train or concourse, for example, then soften again when the outside world is quieter.

You can also turn on “wide area tap”, which will allow you to tap your cheek near each bud (rather than the bud itself) to activate different user-set controls. Otherwise, they are so tiny that it can get quite fiddly.

One last feature to mention is “speak-to-chat”. This will pause music or audio playback when you talk. It starts again after the conversation is finished. Again, this can be turned on or off. 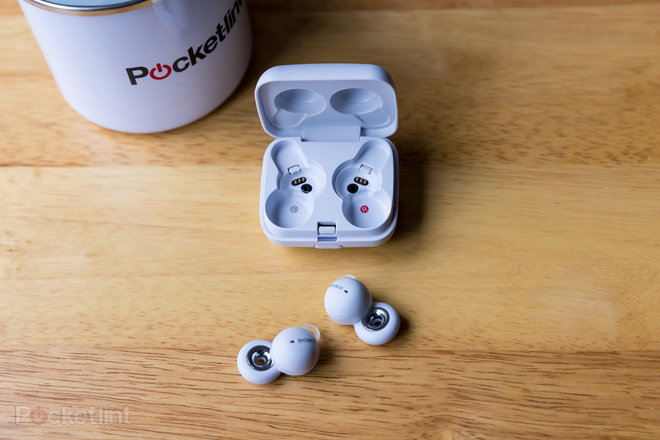 As we’ve mentioned above, the LinkBuds have a wear sensor that will stop playback when you remove them. We often find with earbuds that it’s best to turn this functionality off, as movement can shift them fractionally in our ears and we experience stutter. The same is true here. It might not be the case for everyone as it depends mainly on ear shape, but it’s good to have the option anyway.

Google Assistant and Alexa are supported through their respective wake words, with Siri also available when assigned to a tap, and the buds are Spotify Tap-enabled too.

As the charging case is more compact than most, it does come with a smaller battery. The earbuds carry up to a claimed 5.5-hours of use with a further 12-hours in the case. We’ve only fully charged the case the one time during testing and the manufacturer battery times, based on our week of on-off use, appears likely. 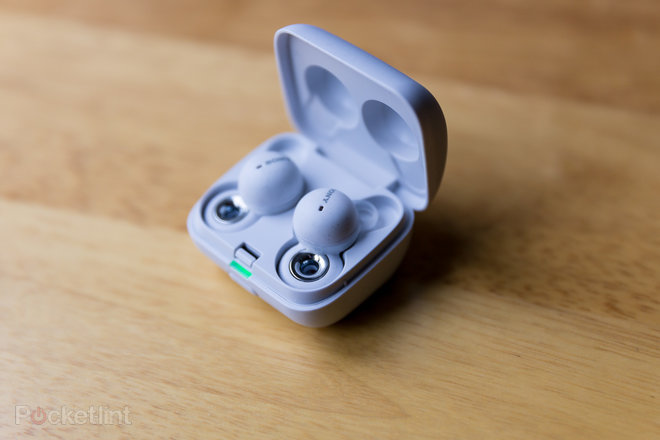 The sound performance will likely be more divisive though.

Each bud incorporates a 12mm open ring driver which provides very decent music playback when the outside world is largely quiet. In fact, thanks to the design and lack of ANC processing, we’d argue that the LinkBuds provide a lovely tone to tracks at mid-to-high volumes. Open-backed headphones have often been preferred by audiophiles, after all.

Liam Gallagher’s acoustic version of Stand By Me offers decent spacing and clarity, while the bassier notes of Future Island’s For Sure resonate in your ear canals as they should. Perhaps even more impressively, every breath of Billie Eilish’s vocal performance on No Time To Die is clear and precise.

Where things get a little wobbly is when you’re trying to watch video on a mobile device when travelling.

We tested the earbuds in the back of a long taxi ride and on a London Tube train and, even at high volumes, struggled to hear dialogue over the hum of traffic or train tracks. Music punched through just fine – not as well as ANC equivalents, but sounded good enough – it was just the subtleties that got a little murky, which affected video watching more. 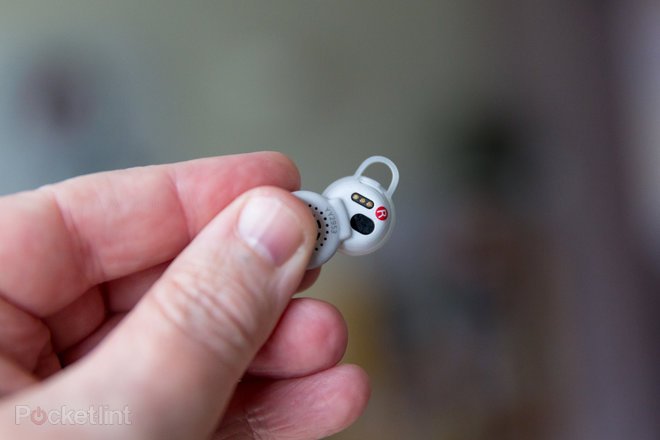 Home working is a different kettle of fish, of course. It’s unlikely you’ll have a Northern Line tube train rattling through your home office space. And so, for Zoom conversations, we found the LinkBuds to be perfect. The microphones are backed up by some clever AI algorithms too, so your voice comes through crystal clear.

It’s important to hear the doorbell ringing, kids screaming and any other household distractions you need to engage with too. This is perhaps where the LinkBuds shine the most and what ultimately convinced us of their worth.