The Sony Xperia 1 II was launched in February as a flagship phone powered by Snapdragon 865 SoC and 8GB RAM. However, the device will soon get a higher 12GB RAM variant. The upgraded RAM version of the Sony Xperia 1 II was leaked some time ago. It is already out in a special configuration in Taiwan. Now, Sony is also rumored to be bringing a new variant of its smartphone to the global market on October 30.

Ahead of its global debut, the 12GB RAM version of the Sony Xperia 1 II has just visited the popular benchmark platform Geekbench to give us some information about the smartphone. Based on the Geekbench listing, the device comes with the Sony XQ-AT42 model number again claims 12GB of RAM. Moreover, it also has the motherboard mentioned as Kona, which is none other than the Qualcomm Snapdragon 865 chipset. 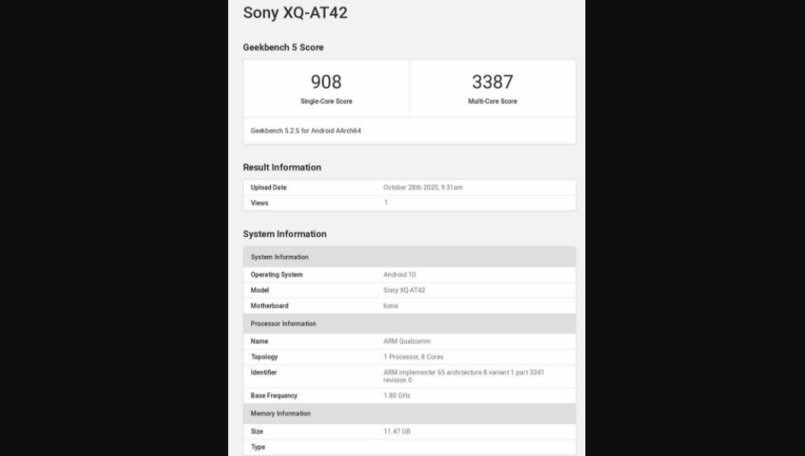 There’s also Android 10 as an operating system and what’s more interesting, Geekbench reveals that the 12GB RAM version of the Sony Xperia 1 II has better performance when compared to the 8GB RAM edition. According to the listing, the new model managed to score 908 on single-core and 3387 on the multi-core test. Compared to the 8GB RAM variant, which in single-core and multi-core test, each scored 895 and 3,225, respectively.

Regardless of the RAM upgrade, it seems that the new version of the Xperia 1 II would be the same. It still maintains a high aspect ratio of 21:9 by packing this 6.5 OLED panel that offers 4K HDR resolution. The screen has also been coated with Gorilla Glass 6 by supporting a 90Hz refresh rate. It also comes with Motion Blur Reduction and an 8-megapixel camera at the top for taking selfies or video calls.

There’s also a 12-megapixel primary camera on the back with Dual PD AF and OIS support. It is paired with a 12-megapixel ultrawide camera, a 12-megapixel telephoto, and a 3D ToF sensor. Meanwhile, to keep it running, there is a 4,000 mAh capacity battery.