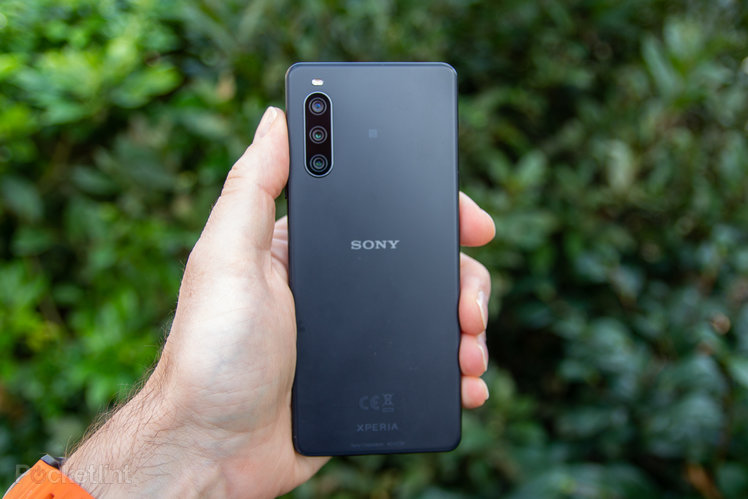 Sony’s smartphone lineup has slimmed down over recent years, leaving us with a flagship device – the Xperia 1 – a compact version of that flagship – the Xperia 5 – and this, the Xperia 10.

The Xperia 10 is designed as a mid-range device, carrying Sony Mobile’s hallmark design with a 21:9 display, sombre build and aiming to bring that Sony experience to those on a slightly lower budget.

Sony has found a groove as far as design goes, meaning that the Sony Xperia 10 IV doesn’t look hugely different to the Xperia 10 III. The sides are slightly flatter and there’s no longer a Google Assistant button, but that’s about the only difference.

There’s a change to the materials, with a plastic back this time around rather than glass, although you’re unlikely to be worried about that, as this phone is now a little lighter than it was before.

Importantly, it still carries an IP65/68 rating, meaning its well protected against dust and water ingress, which isn’t always the case for a mid-range phone. However, at this price, you’d expect it to be. 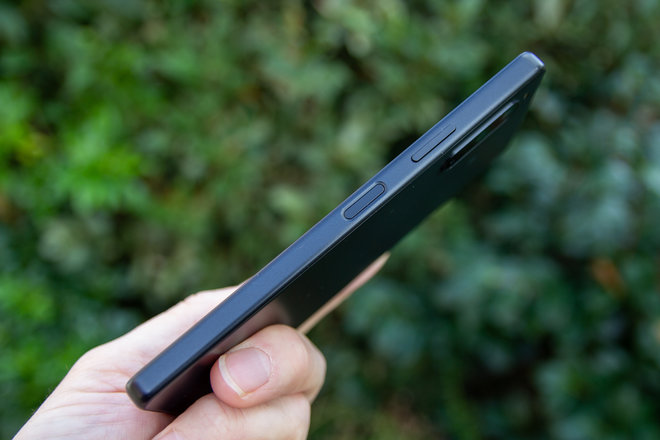 As normal for Sony devices, there’s a 21:9 display – which we’ll talk about in a bit – but that gives this phone a tall, slim, design. There’s no notch as the front camera sits in the slim bezel above the display, while the frame of the phone carries a fingerprint scanner and a 3.5mm headphone socket alongside the normal power and volume buttons.

Sony also hasn’t gone overboard with the camera, so it’s pretty much flush to the rear of the phone, meaning that this slim slab is more compact than some that really want to show off the camera. 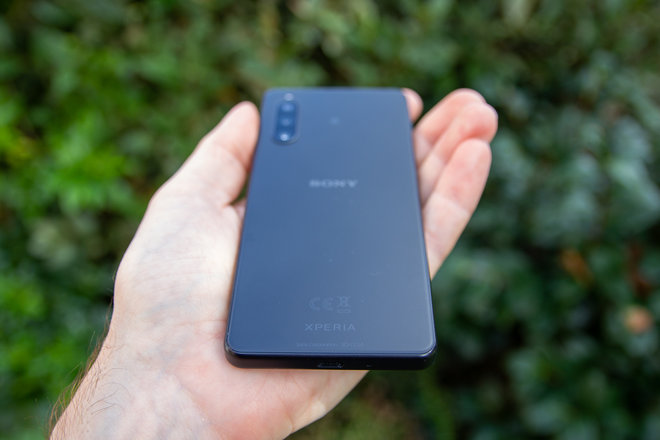 The speakers are built into the edges of the display, and look pretty slick — however, only the bottom speaker is used as the loudspeaker. That means there’s no stereo on offer here and the audio suffers overall as a result.

That is, unless you’re using headphones, because there’s support for LDAC – Sony’s high-res wireless codec – that works with compatible headphones to give you higher quality wireless music.

If you like consistency, then you might like the Xperia 10 IV display as it hasn’t changed much since the previous iteration. Again, it’s a compact device with that interesting aspect, which makes it stand apart from the rest of the market.

So too, do the fairly static specs. Sony has boosted this display, so it is brighter than before, but you might have to nudge it up and down a bit because it’s sometimes a little slow to respond. 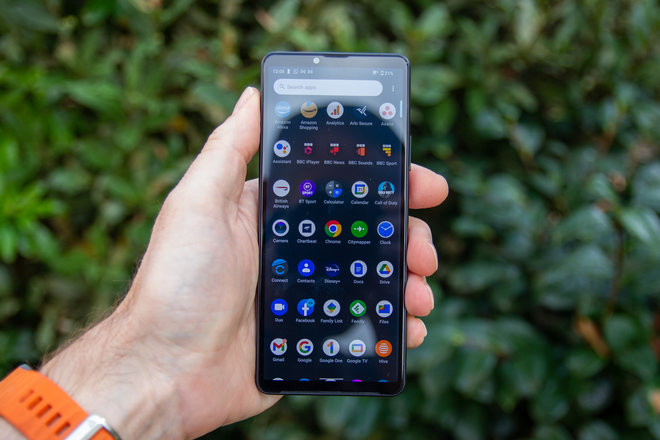 Speaking of being slow, the refresh rate still sits at 60Hz, while most rivals are 90 or 120Hz. That’s not an absolute deal breaker, because you’ll only really notice the benefits of a faster refresh rate when you compare this device to something with a 90 or 120Hz display – but it’s now very much the norm and a little disappointing at this price point.

The display is otherwise great. It’s bright and vibrant, with great colours, although there’s no sign of HDR support. On this size of display that probably doesn’t matter, as it won’t make a huge difference to your overall viewing experience. 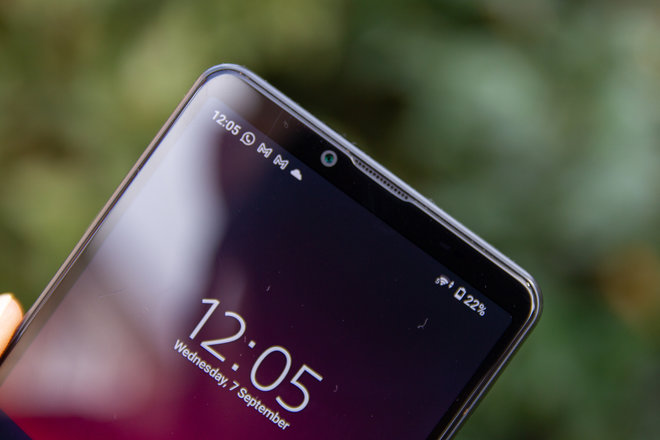 The 21:9 aspect suits some movie content really well, reducing some of the black bars, but does leave this compact phone a little narrow. Compare it to a more conventional aspect compact device – like the Zenfone 9 – and you have a little more space for things like the keyboard.

For us, it’s slightly too cramped for fast text input, resulting in more mistakes – but that might not be the case for all users.

On the hardware front, Sony hits a couple of interesting points. There’s a microSD card slot for expansion of the internal storage, which is definitely worth having.

But Sony has chosen to stick firmly to mid-range hardware with the Snapdragon 695 5G. That means you can access those 5G networks with the promise of faster downloads, but we found the overall connectivity to be poor. We found the Wi-Fi connection to be sluggish at times – in locations that other phones have no problem with – and we also found this phone to register weak signal strength on the mobile network too, out of character with other devices we’ve tested. 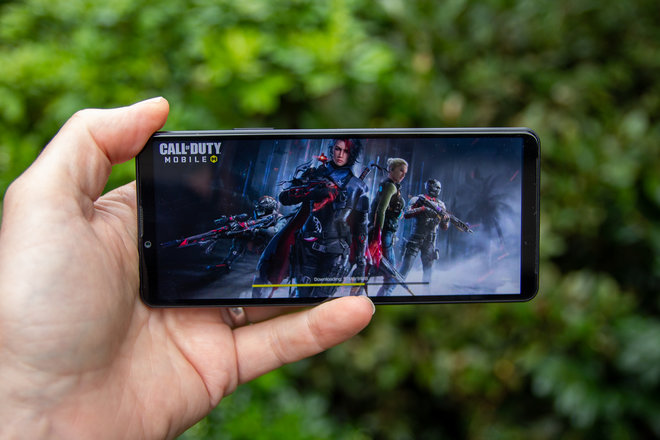 That puts something of a dampener on proceedings and with a number of phones in this segment using Snapdragon 700 Series hardware instead, the Xperia 10 IV feels a step behind.

That might not bother you if your interest is in basic tasks, but it’s a poor choice for gamers (it’s too small and too underpowered) and even with Sony’s leaning towards wanting to offer a great camera experience, the camera is pretty slow too. With all that said, you can fire up most games and get involved, but on a screen this small and without a proper gaming mode, you’ll find yourself frequently swiping out of games as there’s no way to block navigation touches. 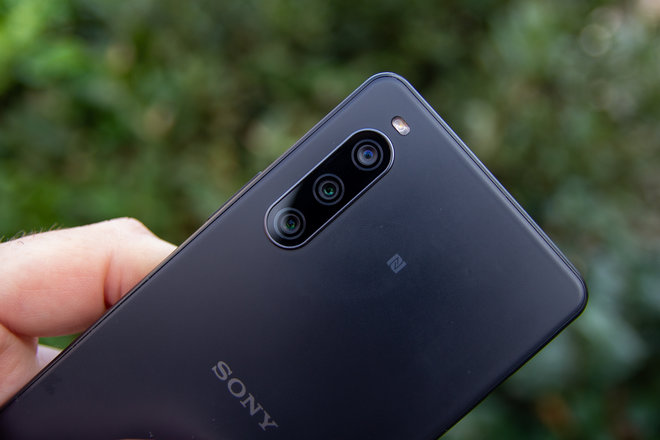 There’s a flipside to having a lower-power phone and that’s battery life. The 5000mAh capacity is pretty capacious for a phone this small and the result is that the Xperia 10 IV will happily last for 2 days with conservative use.

It’s rare to end the day with it needing to charge, so it might appeal to those wanting a device more focused on communication.

There’s a triple camera on the rear of the Xperia 10 IV and there’s something fairly rare here – the inclusion of a 2x optical telephoto lens. Most mid-range phones forego this lens, in preference of a cheap macro lens.

But glancing across the specs reveals a lot about the makeup of this camera. You’ll note that Sony is using a lot of small sensors here, while rivals – like the Oppo Reno 8, which is available for the same money – offers a much larger sensor.

We’ve mentioned the slightly sluggish performance of the camera in the hardware section, but this is another Sony phone that doesn’t like heat: try to shoot video in sunny conditions and you might find it quickly reduces itself to a stuttering mess, with a notification that the phone is too hot.

The main camera works ok in good light, but it doesn’t cope well with HDR scenes and doesn’t do justice to any sort of highlight, frequently over-exposing. Move indoors or into lower light conditions and things fall off a cliff, resulting in soft images that lack contrast, poor white balance and plenty of noise. There is a night mode that’s slightly better than the normal camera, taking longer exposures and it’s definitely worth using in those conditions.

The ultrawide doesn’t fair much better and is terrible in low light, while the telephoto manages to save a little detail you’d lose if it was digital but still suffers from the same limitations as the rest of the camera. There’s also a different colour tone between the lenses, getting progressively warmer as you move through them.

The advantage that the 2x telephoto offers is that when you use the 10x digital zoom, it’s coming from that lens, so it’s only really a 5x magnification – and better than rival digital zooms taken from the main camera.

The front camera gives low contrast, washed-out, photos, and the portrait mode is simply terrible. Sony hasn’t quite nailed this on its flagship devices, and the same problem exists here, with exceptionally poor edge detection resulting in portrait photos having a sort of halo around the subject before getting to the blurred background.

Overall, it’s hard to endorse this as a camera phone – the inclusion of the telephoto lens in this position is a rarity, but the experience overall is poor, especially at this asking price.

The Xperia 10 IV launches on Android 12 and will receive two Android OS version updates during its lifetime, finishing on Android 14 in 2024. This is joined by 3 years of security updates that will see it through to 2025.

These support levels are pretty much the bare minimum you’d expect, with a company like Samsung now offering pretty much double that, making its mid-range phone the Galaxy A53 5G a solid alternative. 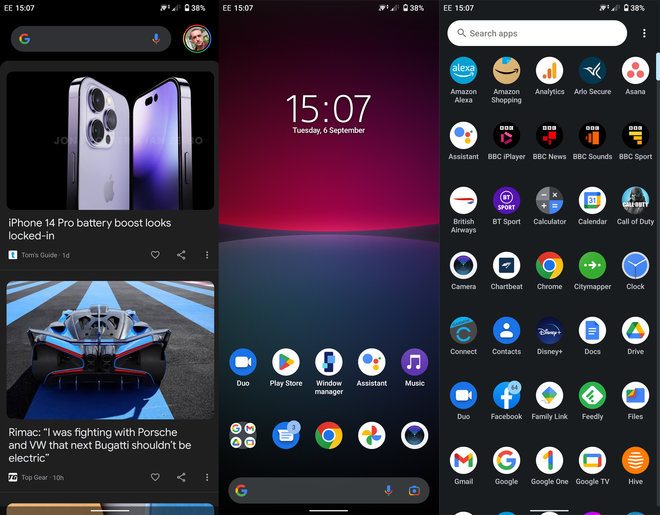 Sony has cleaned up its software offering over the past few years and the Xperia 10 IV benefits from that, giving you the option of avoiding much of the pre-installed bloatware that Sony would like you to use. You’ll still be left with things like Sony’s Music app, LinkedIn and Facebook though, none of which can be uninstalled.

But generally speaking the experience is pretty good, while there’s a lack of power to deliver a smoother experience, we didn’t find any other problems with the software itself.

It’s also worth mentioning that there’s nothing in the box except the phone – not even a charging cable.