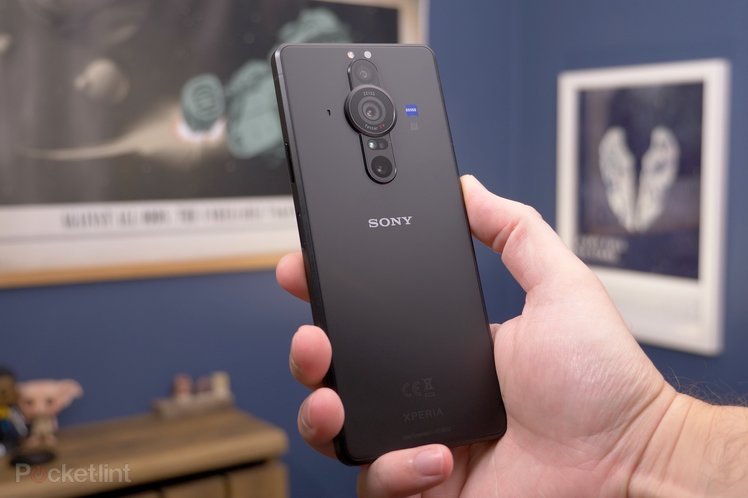 It’s safe to say that Sony doesn’t exactly follow the crowd when it comes to designing and building smartphones. It follows the beat of its own drum, focusing on the devices with points of difference rather than necessarily the mass market.

With the Xperia Pro-I, the phone-maker set out to offer a photography and videography tool for those with professional experience. But will this approach alienate too many people and, indeed, does it even make sense in a phone format?

For a good while now, Sony’s approach to design has very much been centred around the ideas of simplicity, clean lines and practicality – often sticking with features long since abandoned by big-name smartphone markers. It’s no surprise that this same approach is clearly evident in the Xperia Pro-I. Which is, in essence, a tweaked version of the Xperia 1 iii.

That means you get a super slim, flat-bodied phone that’s very classy to look at. It feels great, too, thanks to the soft-touch matte-finish black glass on the back. To distinguish itself from its sibling, it has a subtle grooved finish around the metal edges, while the camera unit has been completely redesigned to incorporate that new sensor – which we’ll get to in more detail later.

Still, it’s a darn sight more attractive and purposeful in its design compared to most phones that have their lenses stuck in a rectangle in the corner. Its central position also gives a pleasing sense of symmetry.

For those who like old school peripherals – like wired headphones, wrist loops, straps and physical media – Sony has you covered here too. There’s a 3.5mm port for plugging in your favourite wired headphones or any other audio cable, plus a microSD card slot in the SIM tray – which you can remove without the need for an ejector tool – and even a little loop for attaching a strap.

Sony has you covered on the buttons front too, although this isn’t always brilliant. There’s a physical fingerprint sensor on the side, which is great and works well when purposefully handled, but is really easy to touch accidentally. Therefore it often registered a failed attempt to unlock the phone, meaning too often we were then forced to use the PIN code to log in instead. 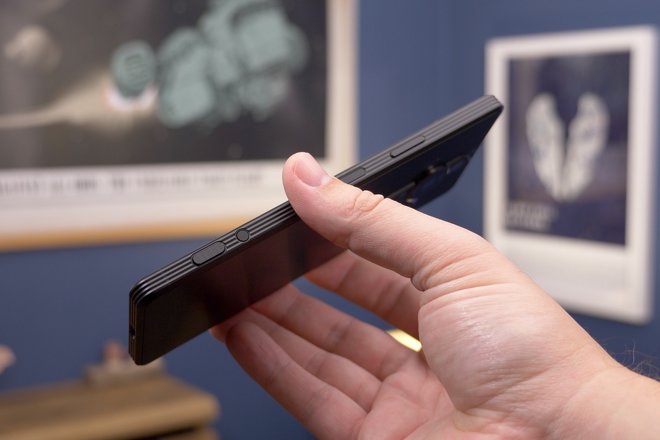 It’s a similar situation with the dedicated camera shutter button. It’s fantastic to have a button on the frame for activating the camera shutter with your fingers positioned away from the screen. It even acts like a proper shutter button, so a half press while the camera app is active will focus. The only issue is when holding a locked phone in portrait mode, it’s really easy to accidentally squeeze it with your palm and launch the camera without meaning to.

There’s lots to like though. It’s both water and dust resistant. We’re quite happy with the decision not to push the screen right to the edges on the top and bottom, too, giving a little bezel to hide the front-facing camera and the stereo speakers.

The display is another area where Sony does things a bit differently. Rather than the usual 1080p or Quad HD resolution panel, the Pro-I has a 4K resolution screen. At 643 pixels-per-inch, it’s among the sharpest resolution displays on any smartphone, plus with up to a 120Hz refresh rate, it’s among the smoothest in playback too. 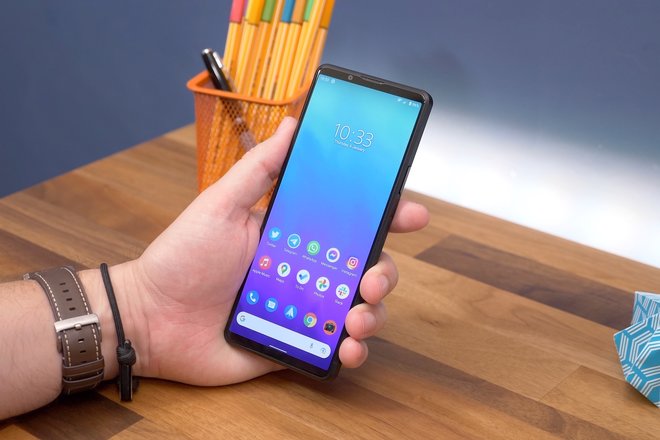 It’s a great display, offering good brightness and impressive colour gamut coverage. Similar to some of the more modern flagship screens, it offers support for over a billion colours, and – with Sony aiming at the pro market – has a ‘Creator Mode’ power, to give you 10 bit colour HDR (high dynamic range) coverage. That all sounds very fancy, but the idea is that you see movies and video as they should be seen.

For watching Netflix, Disney+ and the like, the sense you get is that the dynamic range and colours on offer are superb. It just seems really well balanced, without over saturation or contrast that’s too harsh. It’s a really good panel for consuming and creating media. 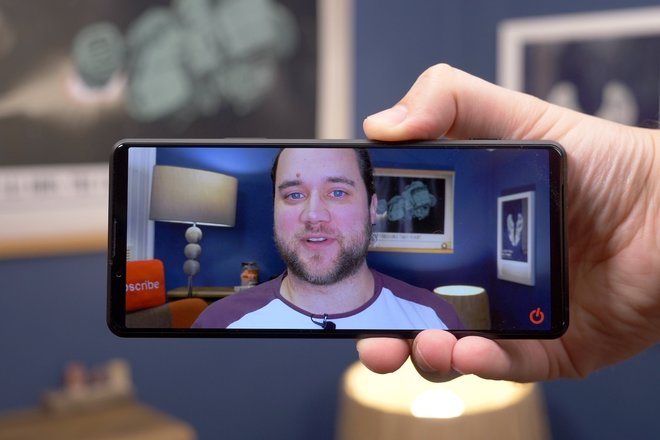 The downside, if you can call it that, is that most mobile streaming services don’t have 4K resolution support – so you don’t often get to experience the fullness of that resolution on offer. There’s also the argument that 4K seems a bit of a waste on a screen this small, as you’ll need to look very closely, not to mention the impact on battery consumption.

As phones go the Xperia Pro-I is certainly fast enough, feeling like the flagship that it is. The interface glides effortlessly under the fingers, apps open quickly, loading data without much waiting around.

However, it does get warm after a little while: play games for 20 minutes, for example, and the rear gets noticeably warmer. It’s not too hot to hold comfortably, but it feels warmer than it should. 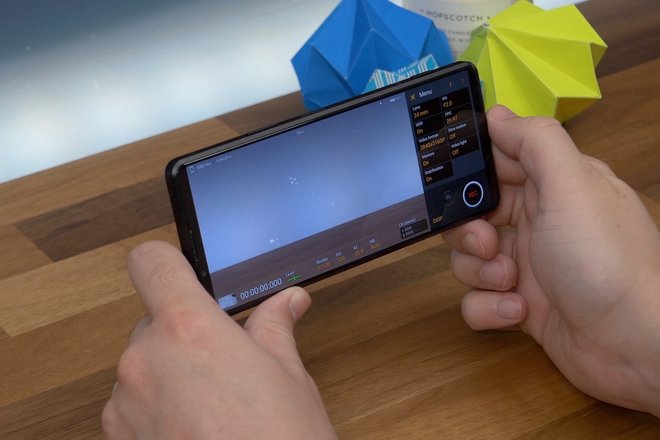 There’s nothing particularly to shout home about when it comes to battery life. It can comfortably get through the day, but will not make it through a second. No surprise given that screen specification.

Not because it’s particularly bad when you’re actually using the phone, but in our experience, its standby life is among the worst we’ve used for years. Left overnight our unit dropped more than 20 per cent, just sat there doing nothing. We never managed to identify anything specific that was draining it, but it’s really out of the ordinary, especially with Android 11’s battery optimisations.

Once emptied, it charges quickly enough and features optimised charging for night time, ensuring you have a full battery when you wake up, but without needing to charge it fast all night and in so doing lengthening the longevity of the battery. Sadly, there’s no wireless charging with this model.

Dealing with the elephant in the room first: the so-called 1.0-type sensor. If it was used in its fullest, it’d be 20-megapixel. But it’s not, it’s 12-megapixel, because Sony has cropped a window into this sensor quite heavily. 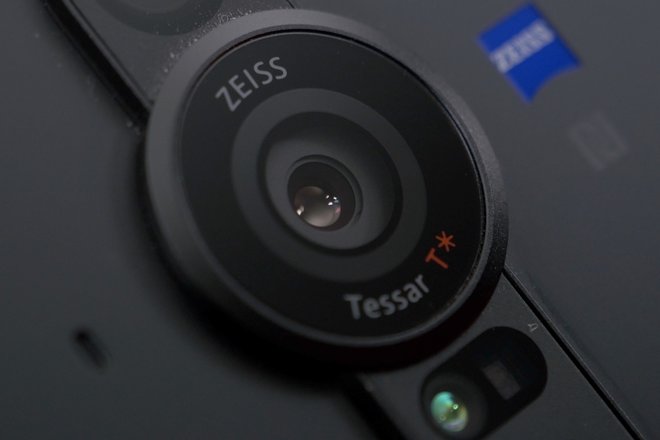 The results of the sensor as it is, however, are actually really good. Well, it’ll depend on your preferences. We like the colour profile, as results are rich yet not oversaturated, while there’s no heavy HDR effect like you’ll often find from many other smartphones.

The contrast isn’t too heavy, so you don’t get that artificial over-sharpened look. Photos have that look of ‘proper’ photographs, rather than oversaturated and contrasty images you’re used to seeing all over Instagram. That, for some, will be a great thing (and not so much for others).

Being a ‘pro camera’ means you get all the pro controls too. You can switch to Basic mode, shoot in auto and get great results in most light conditions. However, you also get all the manual controls you could need to adjust ISO sensitivity, shutter speed, and white balance.

You get those same controls for video. We particularly like to make use of the manual focus, allowing control for lovely slow pull focus shot that most phones couldn’t even dream of pulling off. The autofocus and tracking available is excellent too, with some smart eye-tracking and quick focusing in both video and photo modes.

Eye-tracking is really effective and works in a multitude of scenarios. As long as it sees an eye, it’ll lock onto that subjects automatically, even if the eye is distorted by a magnifying glass or shaped/coloured glass in front of the lens.

Sony does seem to push more towards this manual control, particularly for video, where you get three different apps to choose from for shooting. It’s not the most user friendly experience, given how this is divided up. The interface just isn’t especially intuitive either, even for someone who is used to manual controls in dedicated cameras.

Once you get over that learning curve it does mean you get a deeper understanding of how to control this phone’s camera. But in a world where machine learning and processing has the ability to do it all for us, we suspect that’s a learning curve too far for most people.

The other two cameras – the ultrawide and telephoto – take decent photos too, but the optical zoom does feel a bit lacklustre, offering only 2x zoom (at an apparent 50mm equivalent), and the image quality is noticeably poorer than from the main. It’s quite rough in terms of detail, while highlights are often slightly blown out.