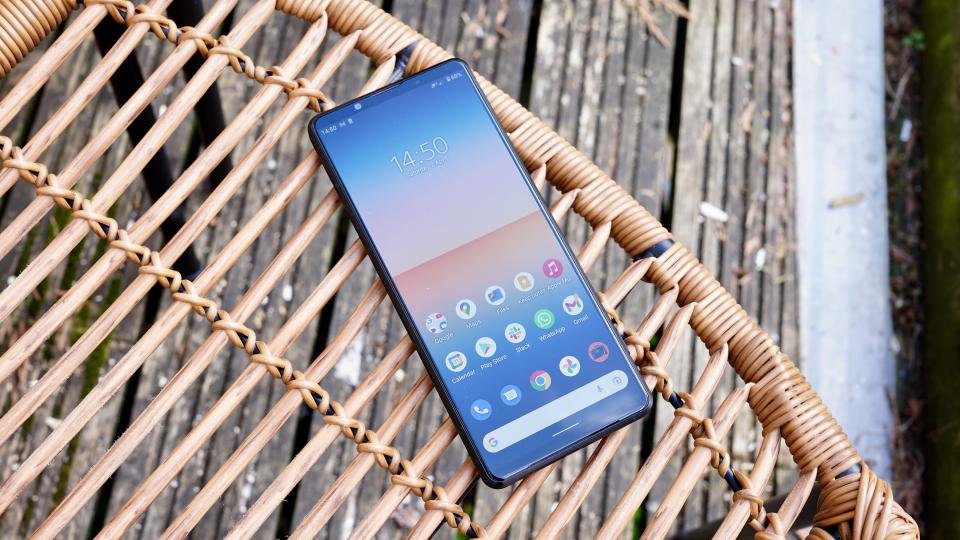 How do you follow up an extravagantly expensive, decidedly niche flagship smartphone like the Sony Xperia 1 III? If you’re Sony, you release the even more expensive and niche Sony Xperia Pro-I.

By leaning into its enthusiast heritage and embracing its pro photography credentials, Sony has created a phone that is without equal for anyone who values fine camera control above all else. For everyone else, however, there are some notable drawbacks.

Sony Xperia Pro-I review: What you need to know

The Sony Xperia Pro-I is, in a nutshell, the Xperia 1 III (£1,200) with a couple of significant tweaks. The most consequential of these come from the camera offering, which incorporates a much larger 1in main camera sensor and a surprisingly less impressive telephoto camera.

Elsewhere, the Xperia Pro-I uses a similarly squared-off and flat-edged design, albeit with a frame that’s easier to grip and a slightly reconfigured set of physical buttons on the right-hand edge. This is in keeping with its status as a photographer’s tool first and foremost. 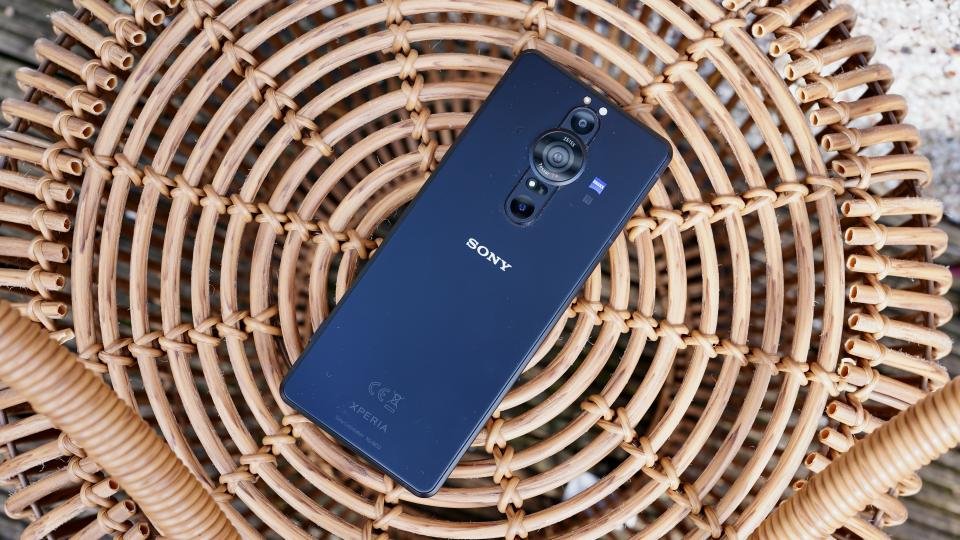 Otherwise, you’re looking at a phone that’s powered by the same Snapdragon 888 processor as its close brother, and with the same unique 6.5in 4K OLED display.

There’s the same 4,500mAh battery powering it all too, and the same 30W charger is bundled into the box. Curiously, Sony has dropped wireless charging from the package altogether, which you wouldn’t expect to see from such an expensive flagship phone.

Several months on from its low-key December 2021 debut, the price of the Sony Xperia Pro-I has dropped considerably. While it no longer costs an eye-watering £1,599, however, it’s still right at the top of the (non-foldable) flagship pricing ladder.

Given that these two rivals provide (alongside the Google Pixel 6 Pro (£548)) the best camera experiences on the market, it’s a fitting comparison.

Sony has been rocking its own freakishly tall and squared-off design language for a couple of smartphone generations now, and the Sony Xperia Pro-I largely follows suit.

It essentially resembles a beefed-up Sony Xperia 1 III, with a thicker 8.9mm body and an extra 25g for a total weight of 211g. Head-on it looks almost identical, with an enlarged forehead and chin enabling the inclusion of true front-firing stereo speakers and a completely unbroken display. This is one of precious few flagship phones not to have a notch of any kind. 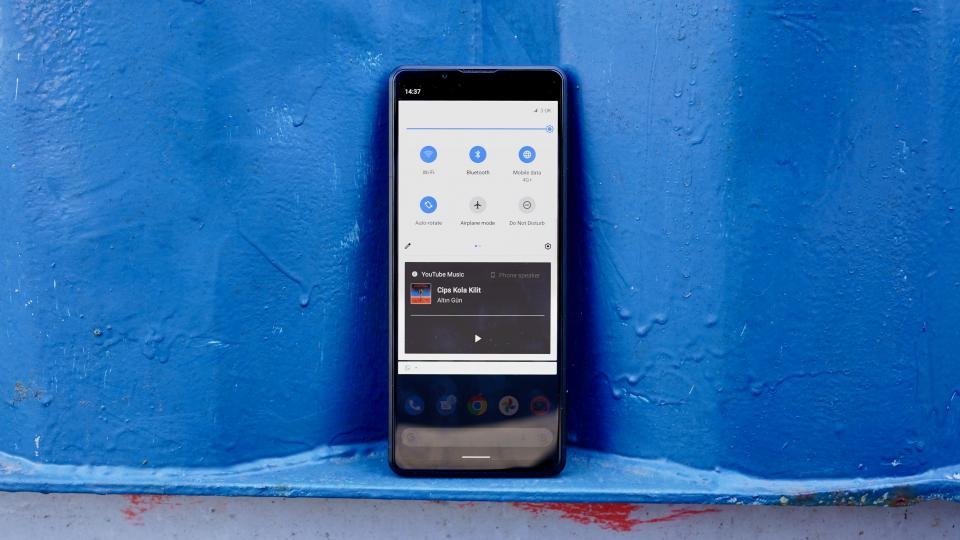 The design differences are apparent as soon as you start turning the Pro-I over in your hand. The rim of the phone drops the smooth finish of the Xperia 1 III in favour of a deeply ridged, textured aluminium finish. This makes the phone much grippier when holding it in landscape orientation as a camera, which presumably you’ll be doing a lot.

If that’s still not steady enough for you, Sony has included an anchor point for attaching a lanyard. Together with an unusually comprehensive IP65/IP68 dust-/water-resistant rating (rather than just the usual IP68) and Gorilla Glass Victus on the front, this should prove more robust than most flagship phones.

Talking of cameras, the corner-mounted lozenge of the Xperia 1 III has made way for a central module housing a vast circular main sensor. There’s no escaping it, but it doesn’t look bad by any means.

The right-hand edge is where most of the interesting stuff is happening here, with a dedicated two-stage shutter button and a video mode shortcut button positioned to the right of the volume keys and the power/fingerprint button. There’s a 3.5mm headphone jack on the top edge, too, which is rare in a flagship phone.

The Sony Xperia Pro-I gives you a generous 512GB of internal storage as standard. It also comes equipped with a microSD slot for expansion purposes, and you don’t even need a fiddly SIM tool to access it.

It shouldn’t come as any disappointment that the Sony Xperia Pro-I display is much the same as that of the Sony Xperia 1 III’s. It’s still a fine 6.5in OLED screen, and quite unlike anything else on the market from rival brands.

The main point of differentiation is a 4K resolution, which works out to 3,840 x 1,644 pixels for a pixel density of 643ppi. No non-Sony smartphone display even comes close.

Not at its maximum resolution, at any rate. It’s worth mentioning that this display doesn’t hit true 4K in many situations. For most tasks, it will output at 2,560 x 1,096 (FHD+), but when 4K video content is on the agenda (check YouTube), it will switch on those extra pixels right across its unusually wide 21:9 aspect ratio.

Perhaps a more useful way to look at it, given the Pro-I’s camera focus, is that Sony’s top phones are the only ones on the market that let you view your 4K video recordings natively.

While this is much the same display as the Sony Xperia 1 III, I found the Pro-I to be slightly less colour accurate. In Creator Mode, which targets the BT.2020 colour gamut, an sRGB gamut coverage reading of 94.7% and a gamut volume of 96.4% is similarly strong, but a Delta E of 1.79 proved slightly less accurate than expected.

It still doesn’t get very bright either, with a maximum recorded brightness of 377cd/m² with the auto-brightness setting switched off

The Sony Xperia Pro-I launched right at the tail end of 2021, which means that it was always going to be living on borrowed time with its choice of processor. The Snapdragon 888 chip that powers this phone was superseded by the Snapdragon 8 Gen 1 soon after it hit the shops, though this is backed by a generous 12GB of RAM.

An average Geekbench 5 single-core score of 1,122 and a multicore score of 3,541 suggests very little difference in CPU terms between this and the Xiaomi 12 Pro, while these are actually better scores than the OnePlus 10 Pro managed. Both of those rivals pack the newer Snapdragon 8 Gen 1.

The main difference relates to the GPU, where the Sony Xperia Pro-I is competitive in the GFXBench onscreen tests, but drops well behind the iPhone 13 Pro Max in the offscreen tests.

That’s by the by in a phone that performs so smoothly in real-world use. Far more disappointing is the Sony Xperia Pro-I’s downright mediocre battery life. I routinely found myself down to 10 to 15% at the end of a day with around four hours of screen-on time.

Most perplexing is the fact that this falls some three-and-a-half hours short of the Sony Xperia 1 III, causing me to wonder if my test unit had a duff battery or a weird software bug of some sort. Whatever the source, it’s a negative mark on the phone.

You get a 30W wired charger in the box that can get you from zero to 48% in 30 minutes, which doesn’t compare to the 67W, 80W or 120W equivalents offered by some of Sony’s rivals. More bafflingly, Sony has removed wireless charging from the equation, too, which is quite a thing to see in a four-figure flagship phone.

Though the Sony Xperia Pro-I’s camera setup looks identical to the Xperia 1 III’s at first glance – three 12MP sensors and a 0.3MP TOF 3D (depth) sensor – there are a couple of big changes here.

Most important is a completely new wide sensor, which is essentially the same huge 1in sensor as can be found in the legendary Sony RX100 point-and-shoot camera line. Not all of that sensor is accessed here, but it’s still very large as smartphone sensors go.

There’s a new telephoto onboard this time around too, though mystifyingly it’s actually a step back from the variable 2.9x and 4.4x zoom of the Xperia Pro 1 III to a disappointingly ordinary fixed 2x.

In among my regular test shots I took some identical auto-mode snaps with the Sony Xperia Pro-I, the iPhone 13 Pro, and the OnePlus 10 Pro (£800) to gauge where exactly the Sony camera fits in. Apple’s latest flagship is widely held to be the best camera phone on the market, with colours that tend towards the natural, while OnePlus’s latest is known for its zingy Hasselblad-tuned colour palette. 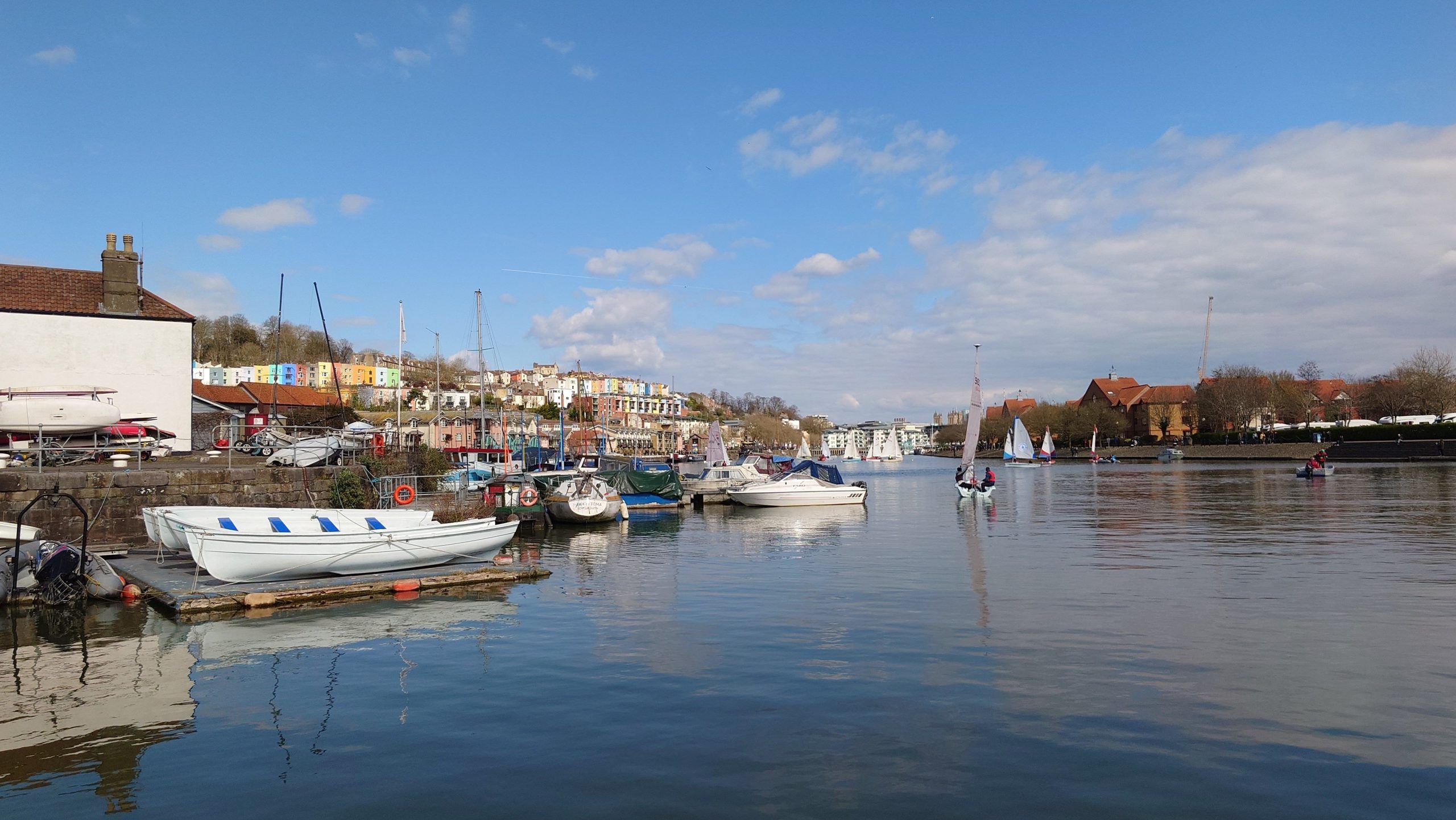 The shots I took largely confirmed those preconceptions, while the Sony shots came out altogether cooler and more natural than even the iPhone’s. Sony is known for applying minimal processing to its images, preferring to present them as neutrally as possible. That doesn’t result in so many instantly sharable shots, it has to be said, and the iPhone continues to rule the roost for sheer fire-and-forget excellence.

But Sony’s approach pays off when it comes to preserving shadow in certain HDR situations, whereas the OnePlus 10 Pro in particular evens and brightens dark areas out to a distracting degree. Viewed from another perspective, of course, you’ll lose more of the detail hidden within those shadows, and shots on the Sony can look a little murky and flat. There’s something to be said for the more natural approach, though.

It’s also the ideal approach to take if you’re willing and able to spend any time editing photos on your computer, as there’s plenty of raw material here to work with according to your taste.

Zooming right into each shot, it becomes apparent that the Sony Xperia Pro-I is much less aggressive with its sharpening than the OnePlus 10 Pro and even the iPhone 13 Pro. There’s less of that pixellated halo effect to edges and fine detail, with a markedly softer look.

In lesser (but not pitch black) lighting, the Xperia Pro-I’s large sensor and unfussy processing again lead to pleasingly natural shots that don’t try to over-brighten darker scenes. However, the lack of an out and out Night mode means that it struggles with truly dark scenarios. 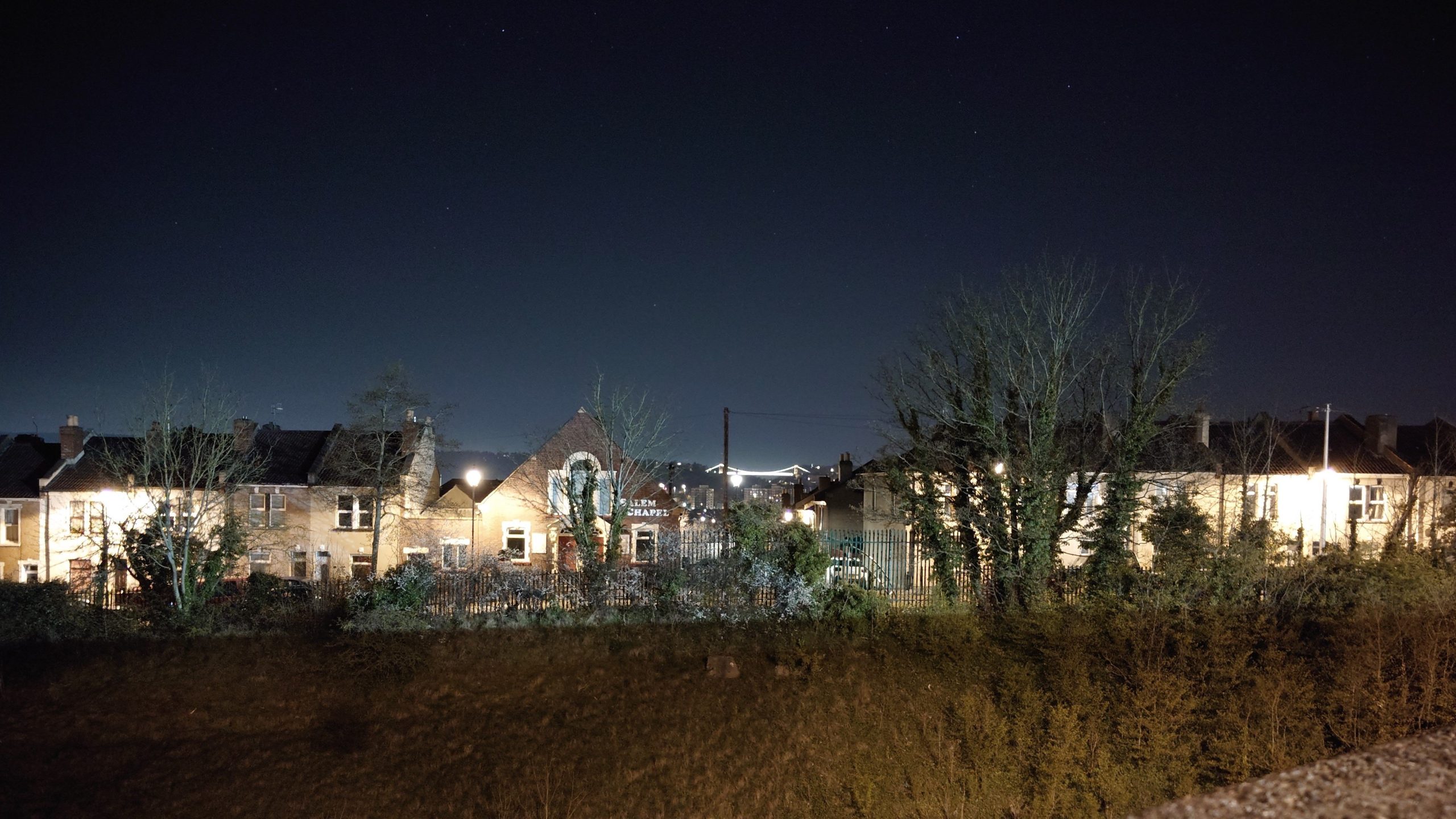 The phone’s ultrawide shots are the worst of the three phones, however, with a washed-out and overexposed look that compares badly to the OnePlus 10 Pro’s more pixel-packed sensor and the iPhone 13 Pro’s better-processed, more evenly balanced shots. 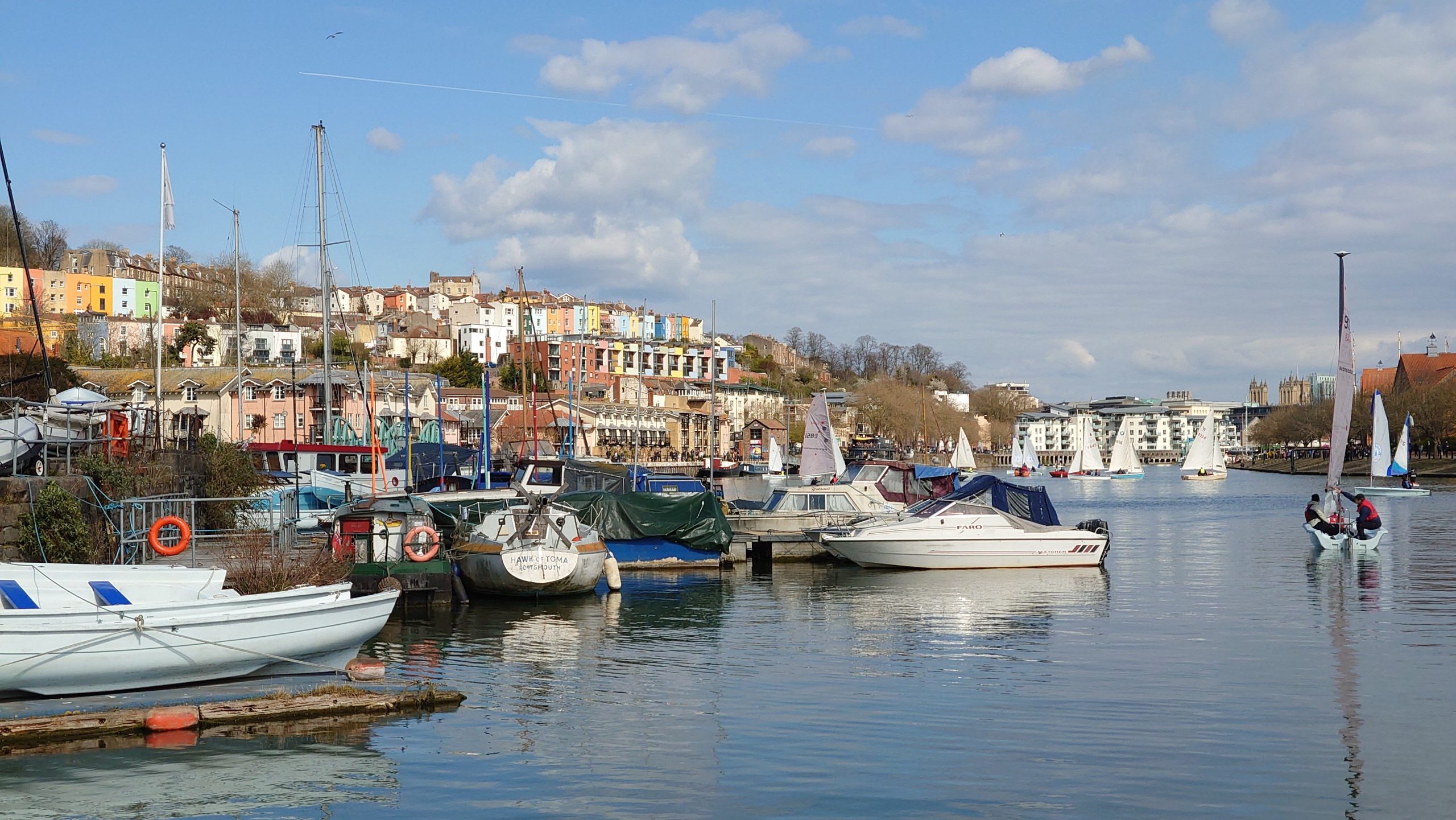 The 8MP selfie camera doesn’t yield particularly good results at all, especially compared to the iPhone 13 Pro, with a comparatively washed-out palette, pale skin tones, poor detail and a general tendency to overexpose. 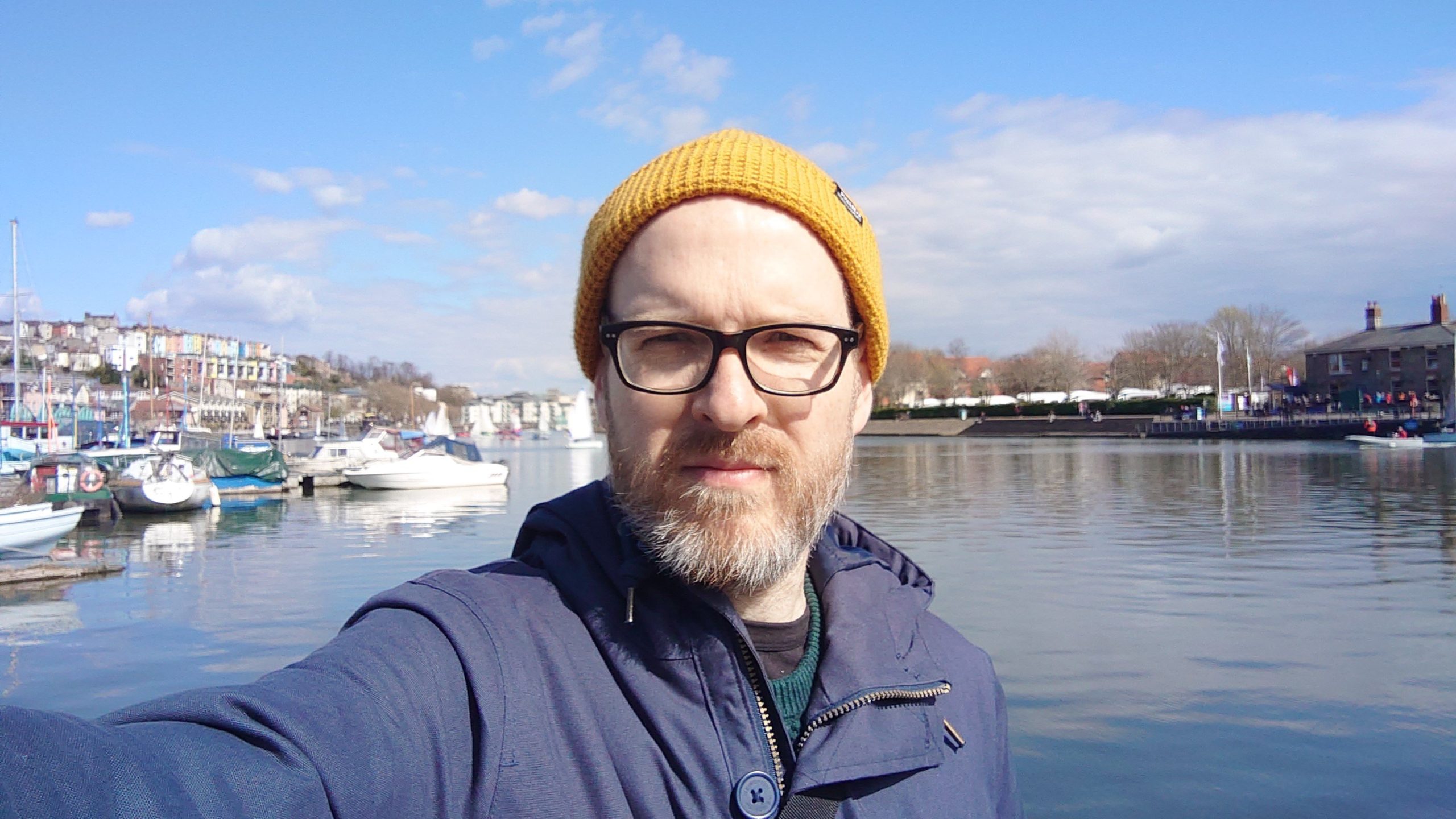 While we can compare such point-and-shoot results all day long, the simple fact is that the Sony Xperia Pro-I is set up to give you atypically extensive manual control over your shots. There’s the two-stage shutter button that makes shooting far more pleasurable, of course, but also a truly Pro-level camera app with an almost full suite of manual modes built right in.

If you’re someone who just wants to fire and forget with your photos, the iPhone 13 Pro or the Google Pixel 6 Pro remain much better bets. If you like to zoom in on the action, then the Samsung Galaxy S22 Ultra wins hands down, while pretty much any flagship rival will give you superior ultrawide results. But for photography enthusiasts who want to scale back the algorithmic assistance and get much more hands-on with how their shots look, there’s no better camera phone than the Sony Xperia Pro-I. 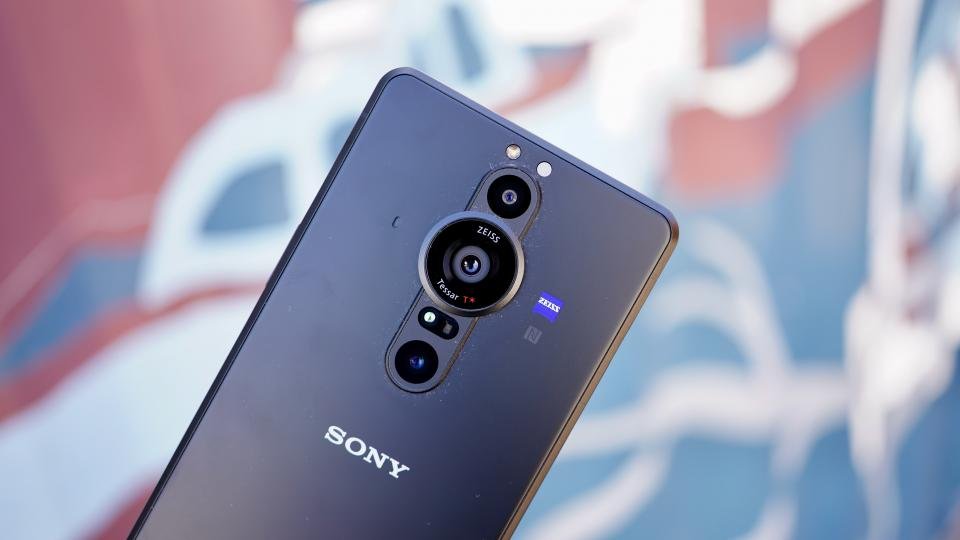 The Sony Xperia Pro-I is an expensive, high-end phone aimed at a very specific subset of users. If you’re a photographer – whether pro or avid amateur – who wishes to get more hands-on with the photography process, then you won’t find a better smartphone right now.

With its physical controls, Pro-level camera app and huge 1in image sensor, as well as Sony’s low intervention approach to image processing, the Xperia Pro-I camera is designed to give you as much control over the variables of photography as possible. This means that it doesn’t yield the best point and shoot results, however, while its telephoto and ultrawide sensors aren’t among the best.

Elsewhere the Sony Xperia Pro-I has a uniquely (one might say excessively) tall, pixel-packed display and a grippy industrial design that sets it apart from its contemporaries.

In more general terms, the phone’s processor is already outdated, its battery life pales next to its rivals, and it’s still very expensive even with a hefty discount since launch. All of which means that you really need to fit into that niche “avid photographer” class in order to make the Xperia Pro-I a recommended purchase.