Speedtest by Ookla provides free analysis of various Internet access performance metrics, and now iPhone owners can also use this app for measuring their network’s ability to stream video.

Rather than simulate video streaming, Speedtest has opted for a somewhat different approach. 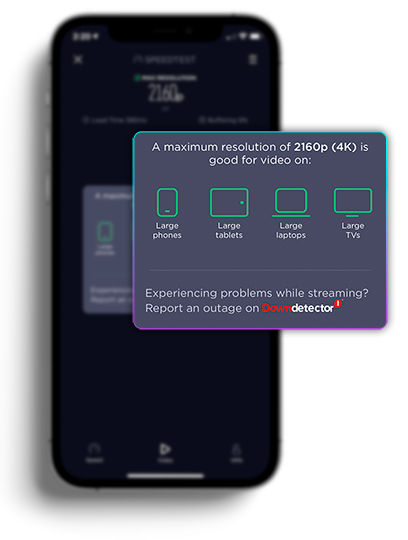 After the test has been completed, the app shows you the maximum resolution that your network can stream video in. You’ll also see recommended devices capable of smoothly rendering video streams at that performance level. This can help you decide whether to try to stream on your largest TV or if you should use your phone or tablet instead.

Video testing from Speedtest plays an actual video to specifically measure the performance of video streaming on your network at any time. An accurate video measurement requires an actual video to be played because video traffic cannot be simulated across a network.

The animation embedded below shows video testing in action.

According to the company:

If the video test finds that the video streaming quality meets or exceeds the resolution supported by your device and you are still unable to stream your video, you will have the option to continue on to Ookla’s Downdetector to see what online services are currently experiencing any issues.

This could come in handy when you’re unsure whether it’s the Netflix backend experiencing a heavy load or your naughty internet service provider throttling your connection again. “If your video test results reveal that you are frequently not able to stream well, you can use your video test history to advocate for yourself when talking to your provider,” Ookla said.

Can I use this feature?

To start a video test, touch the new Video tab at the bottom of the app. Ookla also provides Android and web editions of Speedtest as well, but the company wouldn’t say when this new feature could hit other platforms beyond stating that it’s coming soon.

→ How to configure parental controls on Netflix

Aside from the video-streaming test, the refreshed Speedtest app brings a refined user interface along with updated network and device information, server selection and more. Also, the settings interface is now found behind the sliding drawer at the bottom of the Speed tab.

Speedtest’s new video benchmark is especially relevant now that most of our content consumption has shifted from downloading to streaming. According to Ookla, internet service providers often “prioritize video traffic differently than other traffic.”

But thanks to Speedtest’s new video-streaming benchmarks, you can now precisely benchmark the video streaming performance of your internet service provider.