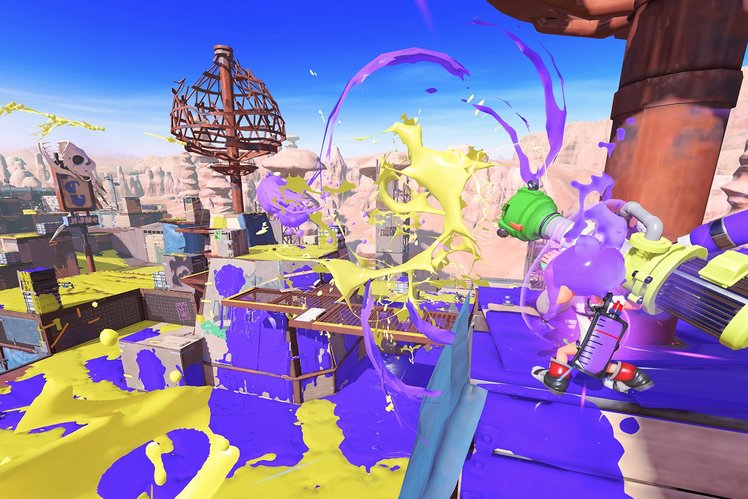 We weren’t sure it was ever going to happen, but Splatoon 3 is finally on the cusp of releasing, continuing a series that looked like it might have been finished after its excellent second game.

The third game plays a heck of a lot like more of a good thing, and that’ll be music to the ears of longtime series fans.

Splatoon 3 drops you into a new metropolis of Inklings, the squiddy kids that the series has starred from the beginning, and leaves it to you to once again make your own style of character.

You get to customise your outfits as well as pick your weapons, and then head off to explore a few different modes on offer.

The game has a single-player campaign like Splatoon 2 did, and we were really impressed by how it hooked us – so much so that we finished it in just a couple of days, over the course of probably four to six hours or so.

It’s a great introduction to the game’s mechanics and gives you chances to try out a range of weapons and abilities. Some levels are combat-focussed, and others pose more puzzling questions, but all of them were great fun to breeze through.

Throughout that campaign, you have a little companion on your back, Small Fry, who’s a little Salmonid (normally the baddies but seemingly not universally evil) that you can chuck about to open new paths or even act as a distraction in a pinch. 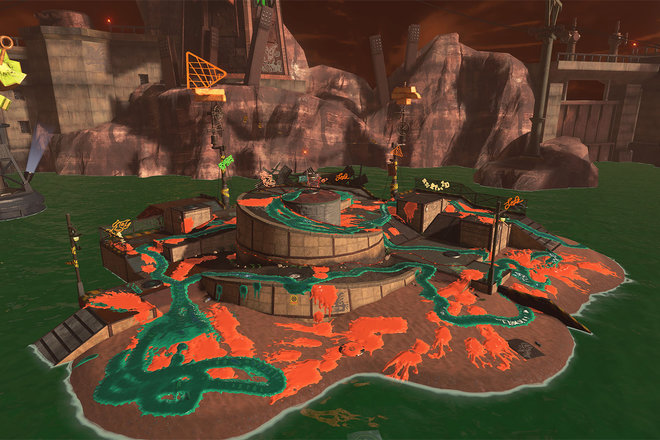 Salmon Run, the series’ co-op mode, is also back in Splatoon 3 and is very recognisable to veterans, again pitting you against waves of enemies as you attempt to gather a minimum number of golden eggs each round.

These are dropped by Boss Salmonids that drop by every so often and take a little more coordination to vanquish. There is a wide selection of these, so it’s fun adjusting your tactics to each, although a few are still complete walkovers.

Finally, the game’s multiplayer side, such a huge focus for longtime fans, is back. We’ve been hugely enjoying rounds of classic Turf War, a 4v4 battle to paint more of the map in your team’s colours, while blasting each other away if you get the chance. 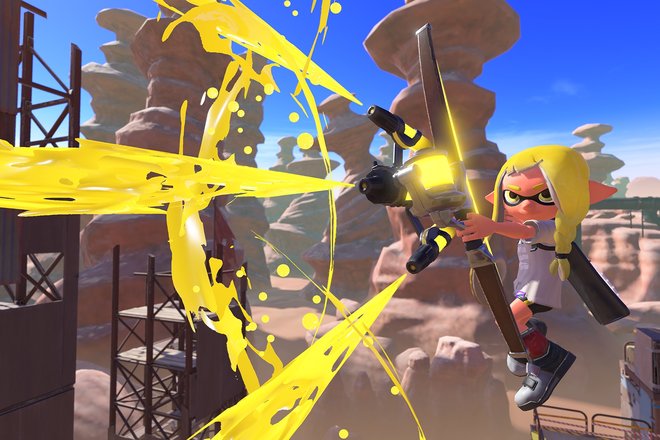 That’s a broad smattering of modes, and each feels like it offers up a rewarding loop to get hooked on, and while it isn’t necessarily an array that adds anything particularly new, it suggests that Splatoon 3 could enjoy just as much of a long tail with its players as the last game did.

A welcome addition across these modes is a lobby system that lets you choose loadouts and customise your Inkling while you wait for games, including a shooting range to let you warm up and get used to new weapons.

Sadly, between matches you have to lock your loadout in before returning to that lobby, so you do need to be on your toes to grab a brief chance to change your weapon or outfit.

Brush off the competition

Actually playing these modes feels like slipping back on a pair of comfortable shoes – the operative word here is evolution, not revolution.

That means you’re still controlling your Inkling with the left stick, and aiming your inky shots with a combination of the right stick and optional motion controls. 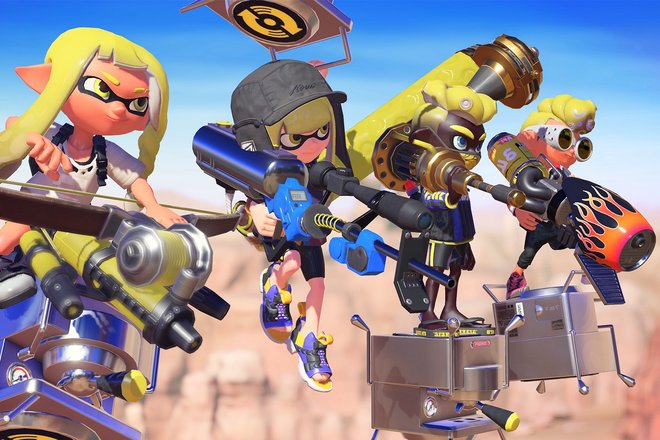 Many high-level players swear by the motion controls and get crazy results from them, but we still found them finicky enough to turn them off for a smoother ride. Your mileage may vary depending on how much muscle memory you have for other third-person shooters.

The shooting itself is just as fun and splotchy as ever, with an even-further expanded arsenal of weapons that we’ve had a good time exploring. From buckets and twin pistols to new additions like a bow, each offers a bit of a swap in playstyle that is fun to navigate.

Along with the singleplayer levels switching things up, It’s great that Salmon Run swaps your weapons between rounds, for example, to make sure you’re not in a comfort zone the entire time, while picking new special abilities also makes for a layer of tactical thinking. 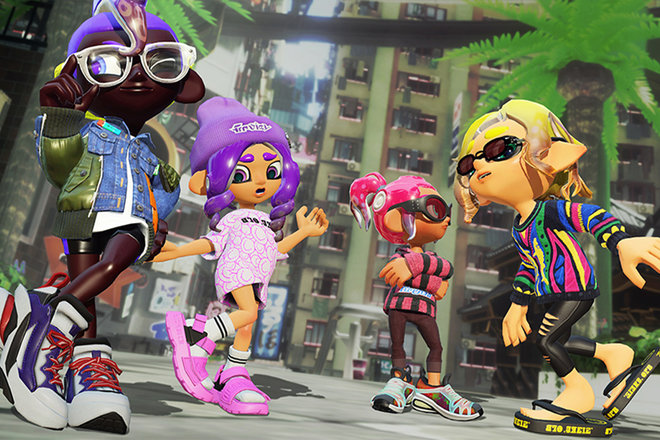 Co-op and singleplayer are both fun and zany, but it’s Turf War that continues to grab our attention, and that’s the mode we found ourselves coming back to in the windows when Nintendo made servers available.

The thrill of watching that paint meter fill up at the end of a round to see who managed to coat more of the scenery remains pretty unique. Similarly, the core conceit, that you can be just as valuable to your team if you’re splattering your surroundings or blasting away opponents, makes Splatoon 3 just as welcoming as the earlier games.

Again, this doesn’t necessarily feel brand-new or fresh, but it’s got a fresh coat of paint and is therefore as smooth and responsive as you could like.

Paint me a picture

The game also doesn’t look drastically different to Splatoon 2, we have to say, although the package of gameplay options at launch is more extensive, with maps that feel bigger on the whole. 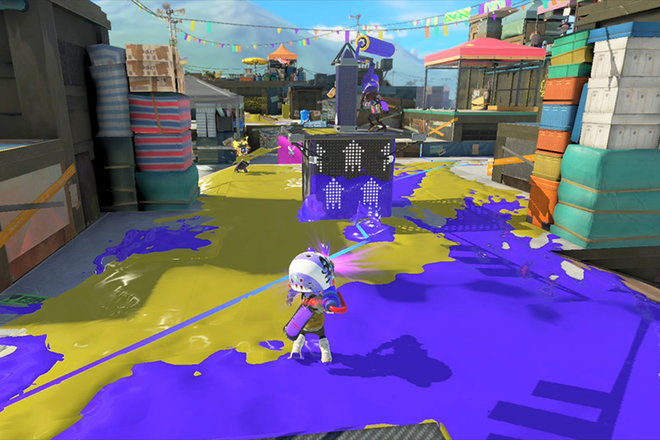 So, while fidelity doesn’t seem all that varied between releases, the devs do seem to have managed to fit more in while maintaining visual performance, which is nice.

We’ve been constantly swapping between docked and handheld play and it’s also worth pointing out that on a Switch OLED, which came out a long time after Splatoon 2 dropped, the game’s colourful paint splatters look better than ever.

The contrast and brightness that the newer display offers makes a world of difference to the handheld experience – albeit one that applies to basically every Switch game, not Splatoon 3 alone. 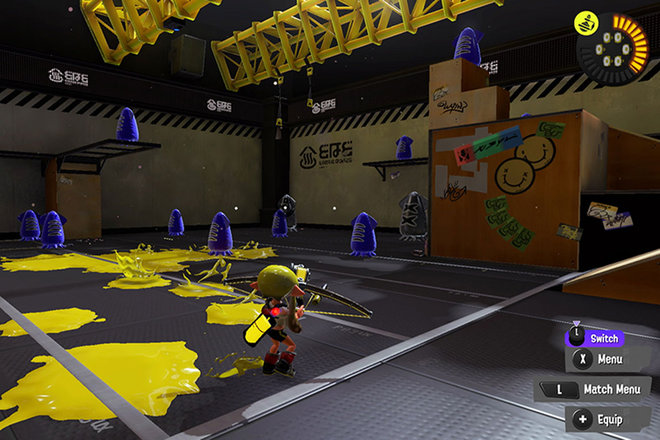 The music and sound effects are once again satisfyingly chunky and odd, with that same funky electronic vibe to the soundtrack that’ll have you bopping along as you wait for matches, and the all-important splatter effects sound simply great.

This all adds up to a really solid package on the graphical and sound side of things, which is no surprise given how solid Splatoon 2 was, but it’s nice that things are perhaps a little brighter and easier to see this time around.