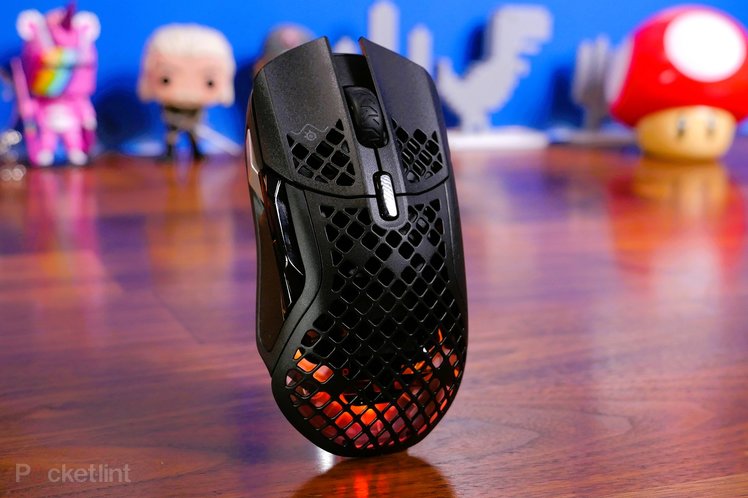 The Aerox 5 is an interesting addition to the line-up of SteelSeries mice, being an ultra-lightweight wireless option that seemingly promises it all.

On the face of it, SteelSeries has taken the already brilliant SteelSeries Aerox 3 and made it even better, with a slightly different shape, more buttons and some other highlights.

However, is it as impressive in use as it is on paper?

We’ve been testing it out over the last few weeks to find out whether it makes our list of the best gaming mice.

To look at, the SteelSeries Aerox 5 is simply another lightweight gaming mouse with holes in it. With a closer view, though, you’ll see there’s more going on here. This is a nine-button mouse with an intriguing layout and curious design.

Despite its roughly symmetrical shape, it’s actually an ergonomic right-handed mouse with a very pleasant design. There’s a slight dip on the side where your thumb rests, and this allows you to nicely nestle into it. The frame sits taller than the Aerox 3, too, which means it pushes up into your palm in a really satisfying way, and it’s easier to grip, too. 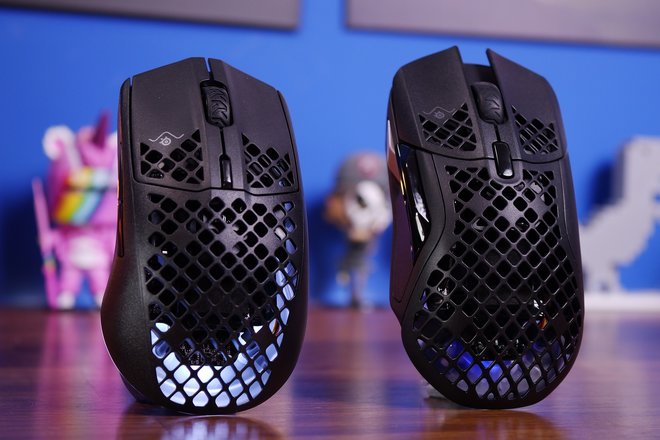 If you put the Aerox 3 and Aerox 5 side-by-side, you’ll see the frame is slightly bigger, the buttons are slightly larger and the Aerox 5 is more visually appealing. When you game with it, you really feel the difference.

If you use a claw or palm grip style, you’ll find the Aerox 5 to be comfortable and satisfying in a number of different ways.

On the side, you have five buttons within reasonable reach of your thumb (depending on your hand size), including a neat little silver switch at the front. Intriguingly, the largest of these buttons isn’t your average thumb button, but instead a custom-built up/down flick switch. Rather than pushing that in, as you would a normal button, you have to push it down towards the mouse mat or up towards the sky.

This flick switch is unusual and an oddity. It’s the one we struggled to get the hang of when using this mouse, but it could theoretically be used with your index finger, rather than your thumb. We think once you got used to it then it might be fun.

The side buttons are a bit slick, though, which could prove problematic if you get particularly sweaty or oily fingers during your gaming sessions. Still, they do jut out nicely, so they’re easy to feel and use. We certainly have no complaints about the layout.

With that said, we do tend to favour a palm grip style, and so found that this can make it a tad difficult to reach that silver front thumb button. This issue could be subjective depending on your hand size, and those with larger hands might not have an issue. 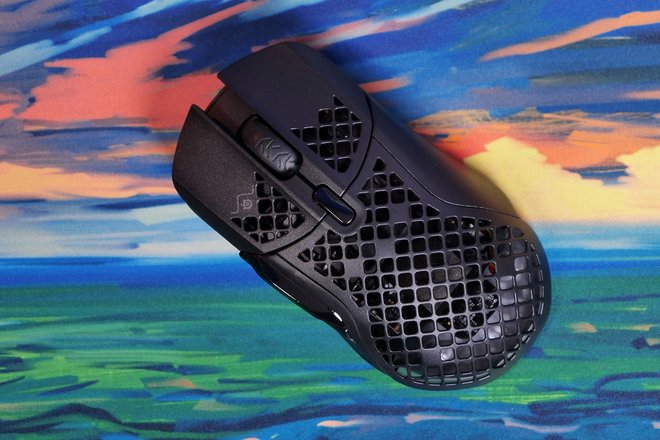 Aside from the buttons, the overall frame of this mouse is made from a black matte ABS plastic. That rough matt finish, along with the honeycomb-like design, makes it easier to grip and hold onto – even if you get hot hands.

This design also means it’s a smidge lighter than the SteelSeries Prime Wireless, though it’s far from the lightest mouse we’ve seen. At 74g, it’s reasonably lightweight, and the PTFE skates on the underside make it nice and smooth. All this translates into a mouse that’s easy to flick about, and it’s far from being taxing on your wrist.

A brilliant balance of specs

As you’d expect, the SteelSeries Aerox 5 has a decent line-up in terms of specs. It’s a wireless mouse that uses SteelSeries TrueMove Air and tops out at 18,000 CPI. We certainly found it accurate and responsive during our gaming sessions.

One interesting note is that this mouse uses next-gen Golden Micro IP54 Switches, rather than the Prestige optical magnetic switches that are used in the SteelSeries Prime line-up. So, its buttons aren’t as clicky or as durable as the ones on those other mice.

That’s quite probably because these switches are IP54-rated, which is an important part of the design of the mouse, and something that essentially means it’s built to resist wear and tear over time. 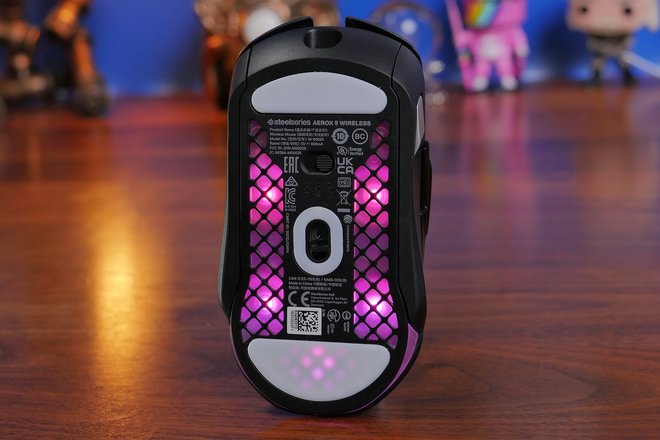 The Aerox 5 also has so-called AquaBarrier Protection, which is designed to keep the internal circuitry and hardware safe from water spills, dirt, dust ingress and more. That includes the switches, too. So, while it’s not entirely waterproof, the Aerox 5 should still stand up to your messy gaming habits or any accidents that might occur.

This mouse has Quantum 2.0 Wireless, Bluetooth 5.0 and USB-C connectivity options, as well. The Quantum wireless is 2.4GHz wireless, ensuring the strongest connection. SteelSeries says this setup includes an advanced dual-channel design, too, which ensures an ultra-low latency connection and no packet loss. So, if you want the best connection, it’s a choice between the 2.4GHz dongle and wired. 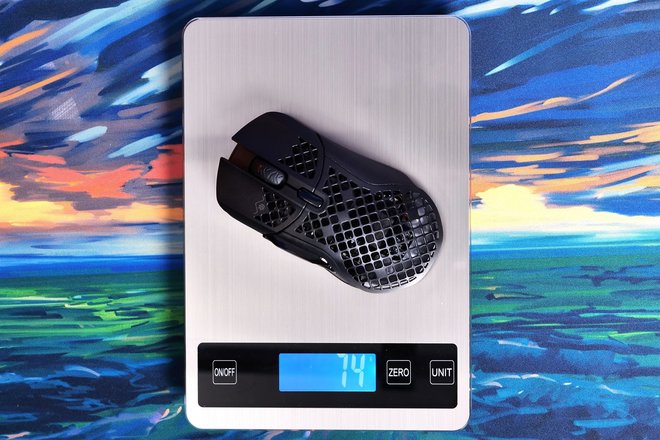 SteelSeries claims as much as 180 hours of continuous play with the Aerox 5, but that’s using the Bluetooth 5.0 connection. We found that, realistically, you’re more likely to get around 40 hours out of it over Quantum 2.0 wireless before it needs charging. At least on default settings, anyway.

There are, however, battery efficiency settings you can tweak in the SteelSeries GG software to maximise battery life. If you’re not fussed about lighting, you can also turn the RGB off entirely to improve it further.

The good news is the Aerox 5 has fast-charging capabilities, and you can game with it while it’s charging, as well. Plug in the USB-C cable and you can get as much as 40 hours of battery life from just 15 minutes of charge, which is very impressive.

The USB-C cable is super mesh, which means it’s floppy and flexible and doesn’t cause any issues when you do need to plug it in. It’s worth noting that the included 2.4GHz dongle is USB-C, as well. However, if you don’t have a USB-C port on your PC or gaming laptop, there’s no need to panic – there’s an adapter included in the box that you can use to connect the mouse via USB-A and extend the range of the dongle, too (not that you need to). 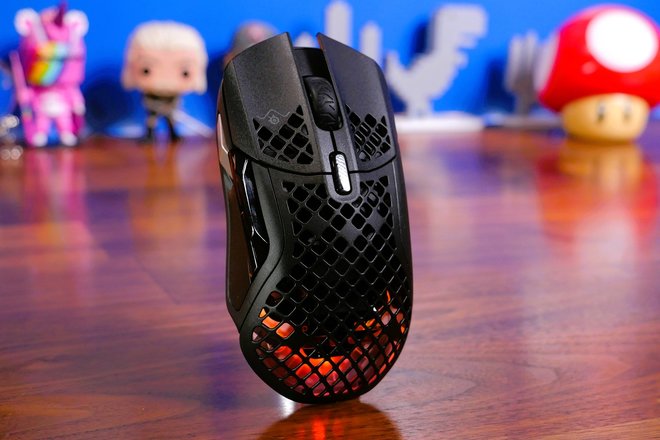 The Aerox 5 has three RGB lighting zones, along with some settings you can customise within the SteelSeries GG software. It’s far from the most impressive mouse lighting we’ve seen, but it’s still nicely customisable.

One thing we like about this is the way the lighting works. By default, it turns off when you’re moving the mouse, which is logical, as it’s mostly hidden under your palm anyway. This saves battery life from unnecessary waste. You can, however, tweak this and set it to do nifty things like reacting to button clicks.