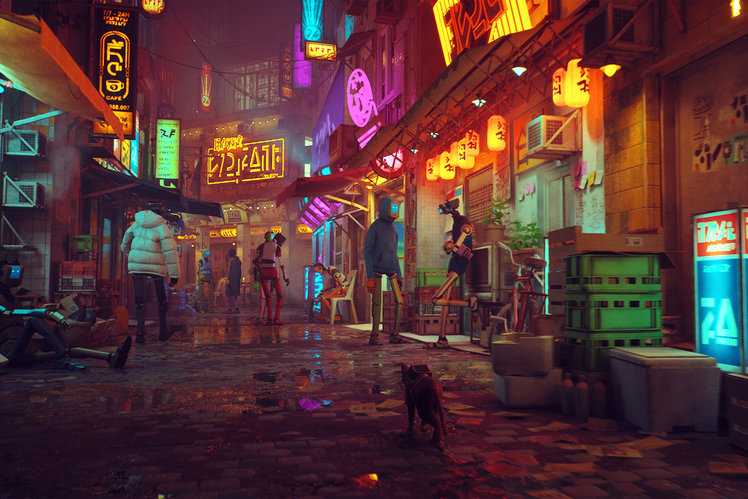 It’s refreshing when an unlikely game lights the world up with a trailer and suddenly finds itself the centre of huge interest – and that’s what Stray achieved when it was unveiled alongside the PS5 in mid-2020.

The sheer novelty that you play as a cat may account for some of that, but its visual flair and mysterious story played their part, too.

Fast forward two years, Stray is finally here. But was it worth the wait?

We’ve been playing through it in order to find out.

Stray opens with a lovely vignette, sampling the life of a ginger furball as they range around a post-apocalyptic facility of some sort with other feline friends. A tumble down into darkness reveals that they’ve been living atop a huge sealed landscape.

It’s a decayed city, divided up into layers and now populated solely by humanoid robots, left over after some sort of calamity befell humanity. Controlling this little cat, you’ll slowly try to navigate your way up and out of this huge dome, uncovering a whole robot society in the process.

The undercity areas you explore are vibrant and lived-in, from the slums at the very bottom of the dome to the metropolitan neon-lit bars of higher levels, all via kooky hippy encampments and decaying sewers. 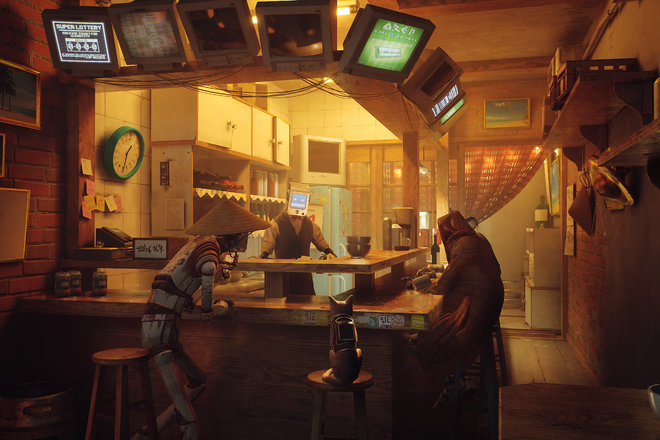 Much of the way, you’ll be threatened by the appearance of Zurks – crab-like creatures that are seemingly infecting the whole area, and are possibly at the heart of why the city was locked down in the first place.

Early in the game, you’ll help power up a drone with a personality of its own, B-12. And using them as your interpreter, you’ll talk to any robot you like to figure out a way back to the outside and your happy little cat’s normal life. 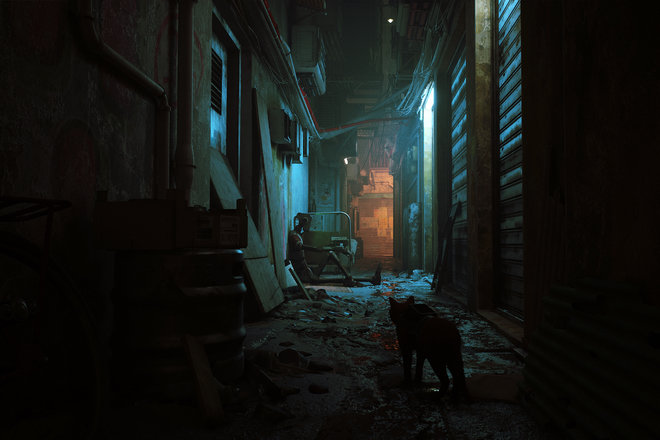 This linear journey offers some hub areas that you can explore in your own time. And, ultimately, it’s a really well-imagined world that sets its scope out fairly modestly.

There’s no voice acting to speak of, but the writing and dialogue are charming enough, while the variety of meowing noises you can make more than compensate.

The world you’ll inhabit in Stray, then, is well-painted and carefully realised, which is ideal since you’re experiencing it from such an unusual viewpoint.

It’s so refreshing to play a polished game that doesn’t put you in control of a human or humanoid character. The experience of navigating as a cat is enjoyable on a purely sensory level all on its own.

Your control scheme is actually pretty simple, though – you can run and meow whenever you like, bring out a flashlight using your drone companion and hop around by jumping on compatible surfaces, designated by a little ‘X’ prompt. 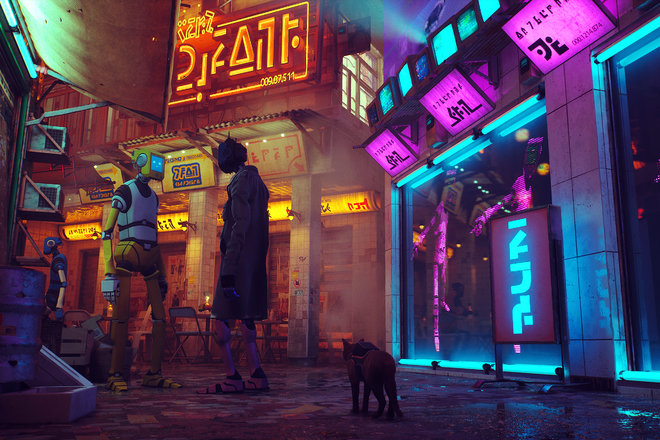 You’ll quickly learn what heights you can approach for a jump, and, within an hour or two, especially when you start exploring the open Slums area, you’ll be plotting creative and fun routes around levels and using exposed pipes and air conditioning units as your stepping stones.

None of this is particularly challenging, but it’s still fun to navigate through an environment as a cat, and you’ll find yourself almost role-playing as a slinkier personality than you might really be.

This is cleverly exploited by the constant littering of physical objects for you to knock off tables. From bottles and paint buckets to books and vases, the chaotic-but-controlled destruction a cat can wreak really is encapsulated in Stray. 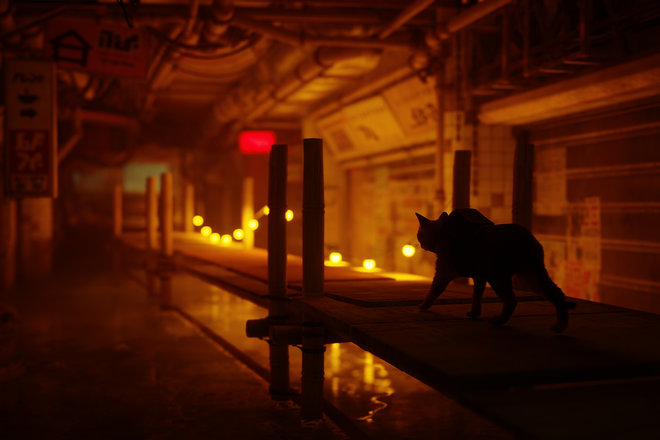 Later in the game, you’ll have to navigate stealthier sections to hide from evil robots, and the Zurks must often be herded or avoided in chase sequences. Still, the general skill requirement is nice and modest, making for a game that you can take at your own pace.

A couple of these sequences feature slightly ungenerous checkpointing, we should add, but, in most cases, it was our impatient play that was leading to failure and not any unfair mechanics.

There are a few optional collectables to hoover up for the diligent, too, but these aren’t essential. Plus, even with a completionist attitude, you won’t find that Stray holds you for any longer than five or six hours, and we’re also well in favour of its shorter run-time.

Stray is a highly impressive independent game from a technical standpoint. While the visual fidelity on show here won’t compete with something like Elden Ring for its scope, the tightly-packed environments that its developers have crafted are really dense with detail. 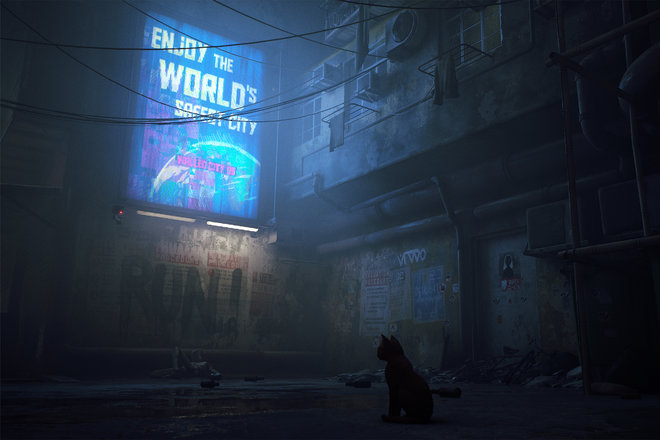 The lighting choices, in particular, are almost always sumptuous. Colourful neons and flickering electric bulbs convey the character of a location in an instant, while posters and signs light the way in a subtle, in-world manner.

When you take into account that most places let you navigate through them in more than one way, you can see entirely different sides to a location as you move back and forth through it – a resounding success for world-building.

If you zero in on specific places, you’ll see plenty of night bars and shopping streets that are easily as memorable as those in a far more ambitious game like Cyberpunk 2077. The only difference here is that these are experienced in isolation, of course, and without a voice cast of A-list actors to meet inside them. 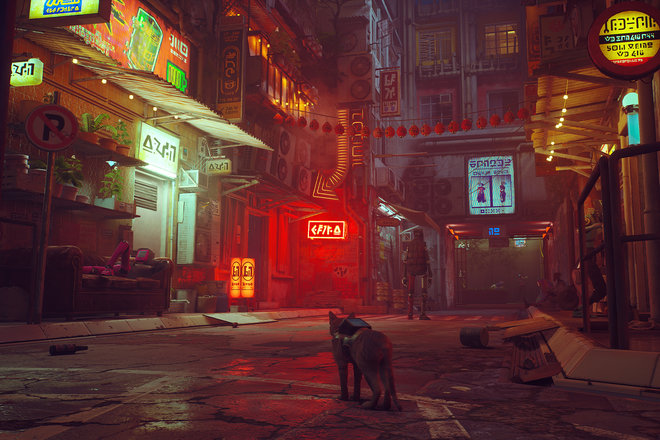 Without wishing to sound bitter, we wish more games would take this approach. There’s plenty to be said for keeping scope contained and polishing what’s there to a sheen.

The game runs nice and smoothly on PS5, with crisp visuals, and it sounds superb through a headset or speakers. Play it without a headset, and your meows actually come through the DualSense’s speaker, which is a fun touch.

We’ve had a couple of tiny glitches, and clicking your right stick to see behind you causes an odd screen flicker, but there’s nothing here to derail your sessions or spoil your fun.