When someone pushes your figurative buttons, it’s irritating by design. On the other hand, when it’s a literal button pusher like the SwitchBot Bot, it can be a real convenience. This block helps you control manually-operated devices right from your phone’s SwitchBot app.

With two distinct modes, “Pushbutton” and “Rocker Switch,” the SwitchBot Bot can work with a wide variety of buttons and rocker switches. Even with this relative versatility, though, you may still struggle to find uses for this robotic button pusher.

If you do have a need, however, the SwitchBot Bot does what it’s supposed to, but you’ll need to make an additional investment for this device to reach its full potential.

How-To Geek’s expert reviewers go hands-on with each product we review. We put every piece of hardware through hours of testing in the real world and run them through benchmarks in our lab. We never accept payment to endorse or review a product and never aggregate other people’s reviews.

Setup is as straightforward as smart devices get. In the box, you’ll receive the SwitchBot Bot with a pre-installed CR2 3V battery, a 3M sticker mount, 2 3M add-ons, and a small user manual. I simply removed the clear plastic battery isolation tab, downloaded the SwitchBot app (available for iPhone and Android), and made sure Bluetooth was enabled on my iPhone 12 Pro Max.

Since I had previously created a SwitchBot account, I then started the app and selected the “Bot DB” icon under the “Bots Nearby” heading.

In the Bot DB settings, you can set a nickname, indicate where the Bot is located, such as “Living Room” or “Bathroom,” and what device it’s associated with, such as a “Light” or “Coffee machine.” There’s also an option to set a Password, change the Mode, and set the Press-hold Time, which can delay from 0 to 60 seconds.

The Mode defaults to Press mode, which is for push buttons or one-way control switches, and causes the SwitchBot Bot’s lever to go through its full range of motion and then return to its starting point.

There’s also Switch mode, which is for push and pull switches, and causes the SwitchBot Bot’s lever to stop after moving halfway in either direction, depending on whether it receives an ON or OFF command. This mode requires the use of 1 of the 2 3M add-ons, which sticks to the push and pull switch and then loops its plastic string onto the Bot’s lever arm for extra extension or leverage.

The remaining app features allow you to set a schedule, which is useful for turning on a coffee maker at a specific time each morning, for instance, as well as checking the device’s firmware version and remaining battery life. With a single CR2 3V battery, the SwitchBot Bot will last around 600 days of daily usage.

Use Cases: Not So Straightforward

SwitchBot is clear about the types of appliances and other devices the Bot works with. The 3M adhesive on the back of the SwitchBot Bot requires more than 0.4-inches (1cm) of clearance to properly secure the device and maximize its leverage.

Although it’s recommended to install the SwitchBot Bot on a flat surface, some devices make that impossible, so it can be installed at up to a 45-degree angle if the 3M adhesive is fully secured. The SwitchBot Bot’s lever has a maximum swing-ability of 135 degrees from fully retracted to fully extended.

Despite its relative versatility, I personally struggled with finding suitable uses for the SwitchBot Bot. Either my devices had an incompatible button or switch type, secure placement would have been difficult or even impossible, or they were already automated through other means.

Of course, a lot of my devices also feature touchscreens, which the Bot is not designed for. It’s purely for mechanical switches. I was able to test it with a spare computer’s power switch, as well as a power strip’s toggle switch, and it worked well, but I have yet to find a permanent home for the SwitchBot Bot.

A Not So Optional Add-On: SwitchBot Hub

Without the addition of a SwitchBot Hub Mini, the Bot, like SwitchBot’s other devices, is limited to being controlled from the SwitchBot app only when within Bluetooth range of your phone or tablet. This works out to roughly 260-feet, or 80-meters, although this range can drop considerably depending on obstacles or other sources of interference.

As a Bluetooth to Wi-Fi gateway, the SwitchBot Hub Mini not only enables control from anywhere your mobile device has an internet connection but also allows integration with Amazon Alexa, Google Assistant, IFTTT, SmartThings, Clova, and more.

Without the SwitchBot Hub Mini and given the specifics of my home, I found I had to be on the same floor and within about 90-feet (27-meters) of the SwitchBot Bot to be able to consistently have it receive and accept my commands. Fortunately, actions added with the Schedule feature are stored locally on the device and, once programmed, do not require further intervention from the app. 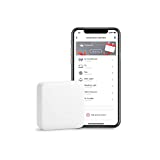 Unite your household devices under one smart ecosystem.

Should You Buy the SwitchBot Bot?

SwitchBot creates tools that help automate devices with analog functionality. Some of SwitchBot’s products, like the SwitchBot Lock, only have one use, to lock and unlock door locks. Despite its one use, this product has the advantage of most potential owners having a compatible lock for it to work with.

Unfortunately, for a device like the SwitchBot Bot, despite having virtually unlimited use cases, the reality is that it can be difficult to find a device with exactly the right conditions to allow it to work its magic. If you’re lucky enough to have a compatible device and a need to remotely control it in a way that the SwitchBot Bot can accommodate, it does work as advertised.