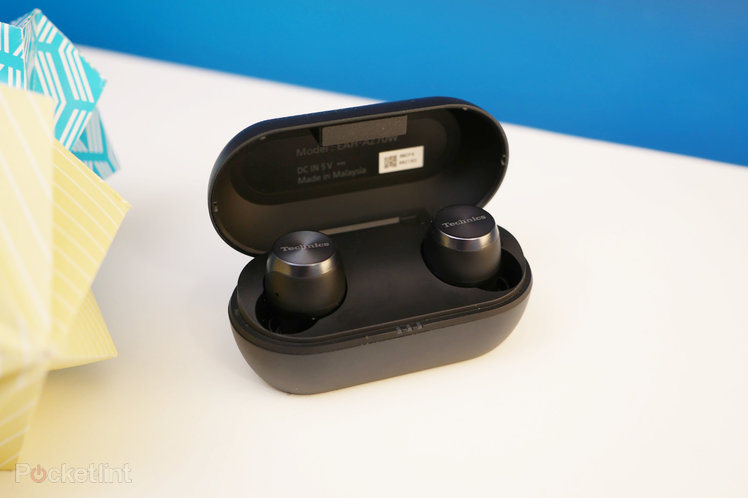 The true wireless market is heating up. Now, with virtually all the big-name players taking part, it can often be bewildering trying to decide which pair is the best. A lot of that comes down to whether you see yourself using such in-ears as more as hands-free call-makers, or tools to transport you into your own musical bubble.

For some, the pull of the Technics brand might just convince you to opt for the premium EAH-Z70W, and there are plenty of reasons why that would be a good decision. This pair is a solid choice.

In a saturated market and with such little material, it’s difficult to produce uniquely designed earbuds that stand out. It’s why we see so many Apple AirPods clones, and so many other non-descript products being launched.

For Technics, the aim was to create something stylish and premium looking, without going over the top. Something that looks like a Technics-branded product should. And the EAH-AZ70W has succeeded. 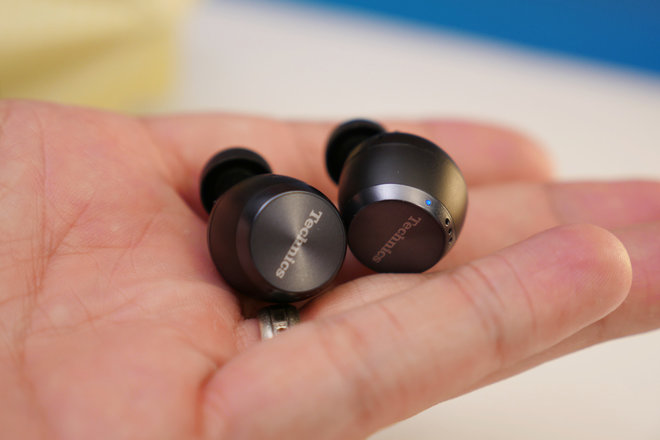 Both the earbuds feature a metallic-looking plastic cap which – in reality – are made from plastic, which only subtly contrasts with the black casing of the earbuds themselves. There’s also a white/silver model for a slightly different look.

These buds to protrude rather far outside of the ear. There’s reason for that, which is mostly down to the tech Technics wanted to fit in and the acoustic design of the internals. There is, for instance, a small acoustic control chamber behind the driver and diaphragm. There’s also a proprietary circuit board, touch-sensitive panel and the hardware required to make the built-in noise-cancelling work.

These ‘buds stay in pretty securely – although we did find that the shape wasn’t that optimally designed to snugly fit in the ear. We found ourselves often needing to slightly readjust the fit on one side. These in-ears aren’t the kind that fit so well that you can ignore them. It’s not an uncomfortable wear, just that you’ll be able to feel these ‘buds at all times. 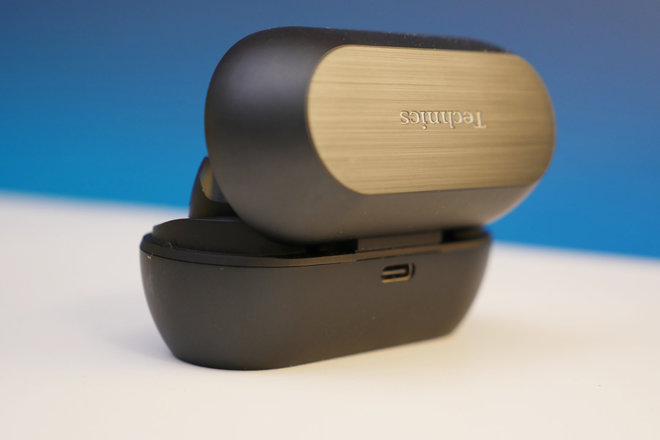 Then there’s the issue of the touch-sensitive control. With deliberate actions it works well: you can tap to play and pause the track, or press-and-hold on the right or left to either switch noise-cancelling/ambient modes or launch your phone’s smart assistant. In that regard, it’s a good tool to have. But if you ever have to adjust your hair, your glasses or the fit of the earbuds then there’s a chance you’ll brush against the touch-sensitive panel and it will pause your music.

Still, the IPX4 rating ensures these in-ears won’t die in the rain. And the overall lightweight build ensures your ears don’t feel stretched half-way to the ground. Each ‘bud forms a good seal with the ear canal too, thanks to flexible silicone tips (which also come in additional sizes).

As for the charging case, that’s a long, flattened pill-shaped carry case which fits neatly enough in a pocket. The metal plate on top is embossed with Technics’ logo and features some subtle pin-striping.

The Technics true wireless in-ears do a great job at blocking outside noise. The silicone tips seal up the outside of the ear canal’s entry really effectively. Then there’s the added bonus of the active noise-cancelling (ANC) filter to help ensure that once you have these ‘buds in your ears, and you start playing music, you’ll block out pretty much everything happening around you. 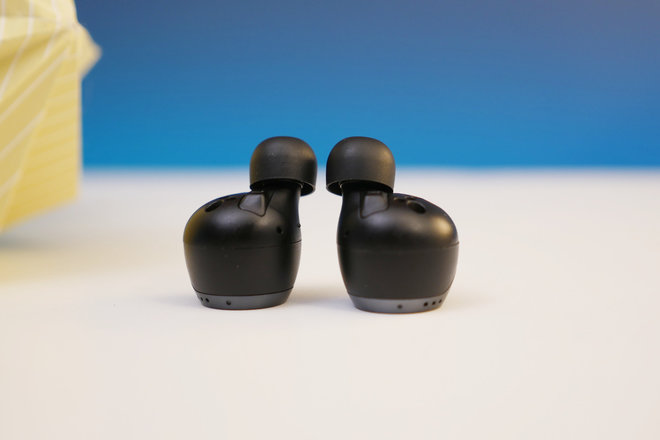 In our testing, it didn’t seem to matter what was happening around us, all we could hear was our music. Whether we were standing in a room with a washing machine deep into its spin cycle, or someone was actually trying to get our attention, we couldn’t hear a thing.

Now Technics does have a relatively basic control app that works alongside in the in-ears to customise elements, including the noise cancelling. So if you want then you can enable ambient mode to hear more of what’s going on around you. That’s useful and really effective too.

Once enabled, you can adjust how much amplification is given to the external mics, increasing how clear you want that ambient noise to be. Like the noise-cancelling, this works well, although having to open up the app on the phone in order to adjust and enable it does make the process of using it a little clunky.

While you can’t adjust the amount of noise-cancelling or ambient sound coming through directly from the earbuds, you can switch it between modes. So switch ANC to ambient sound by long-pressing the touch-sensitive panel on the right earbud, or just switch them both of by doing the same again. Essentially, long-pressing cycles between the modes. 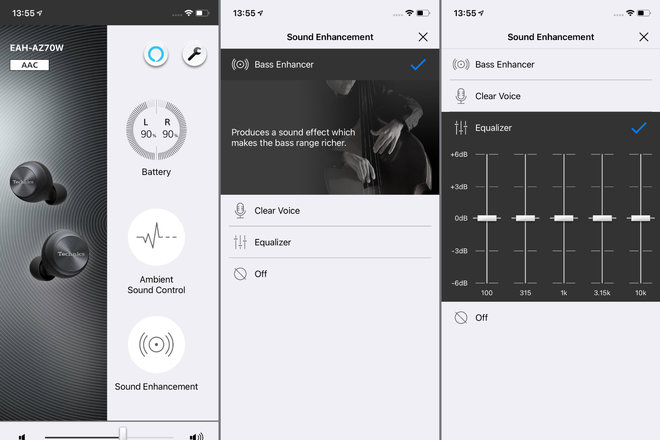 Battery wise Technics isn’t blazing a trail here. Rather, the company has settled for just enough. There’s 6.5 hours of music playback from a full charge, which is pretty decent. Including the charging case, you’ll get a total of 19.5 hours – which falls quite far short from the industry average that’s normally between 25 – 30 hours, if not more in some cases.

One thing you can be sure of with the Technics is the sound is great. Of course, sound is a very subjective thing, but there’s enough about these in-ears to make them sound a little different to some of its competition. One thing that stands out is how well really low bass is handled – but also juxtaposed nicely against some really clear, sharp vocals and high notes. 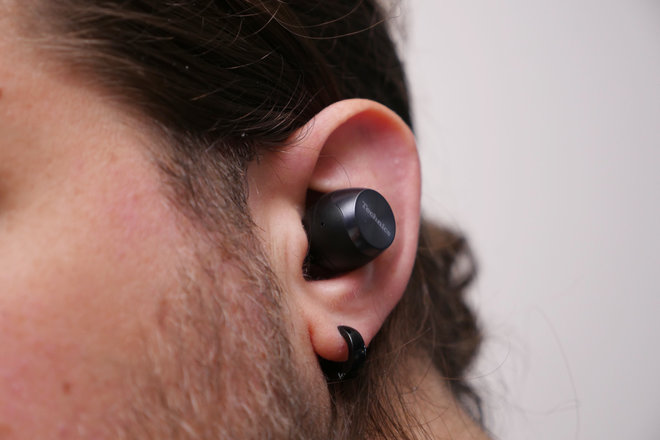 At times these hard-dynamic elements – such as the smack of a snare drum, cymbal or the ‘S’ and ‘T’ in vocals – border on sibilant, but they cut through the track to add to its dynamic appeal.

But as we alluded to at the beginning, it’s bass that really impresses here. The drivers and the design of the empty spaces inside the earbuds ensure that even your lowest bass grooves have room to breathe and sound brilliant. So whether you like listening to upbeat poppy fun like Jason Derulo’s Take You Dancing or some classic hip-hop like Hypnotize by The Notorious B.I.G, the bass is just awesome.

If we had to criticise the sound at all, we’d say these ‘buds could do a better job of lifting some of the subtleties and mids in the background. 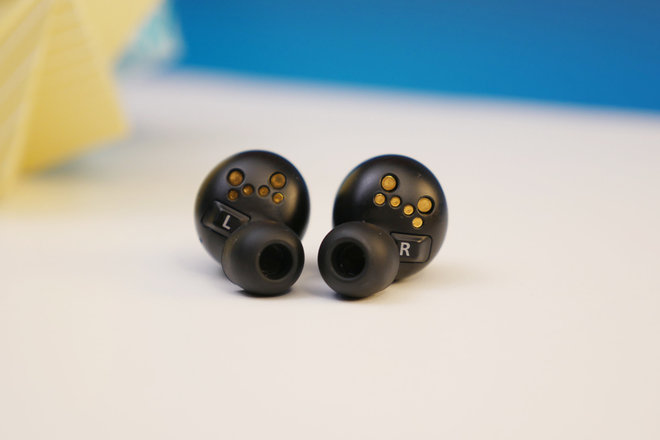 Take the Disturbed’s atmospheric and spine-tingling cover of The Sound of Silence, as an example. You get the clear and distinct vocals and plucked guitar cutting through, but the strings could be lifted a little in places. While they’re definitely there, there are times where you have to concentrate a little more than we’d like to hear some of the more subtle elements that aren’t the core parts of the track.