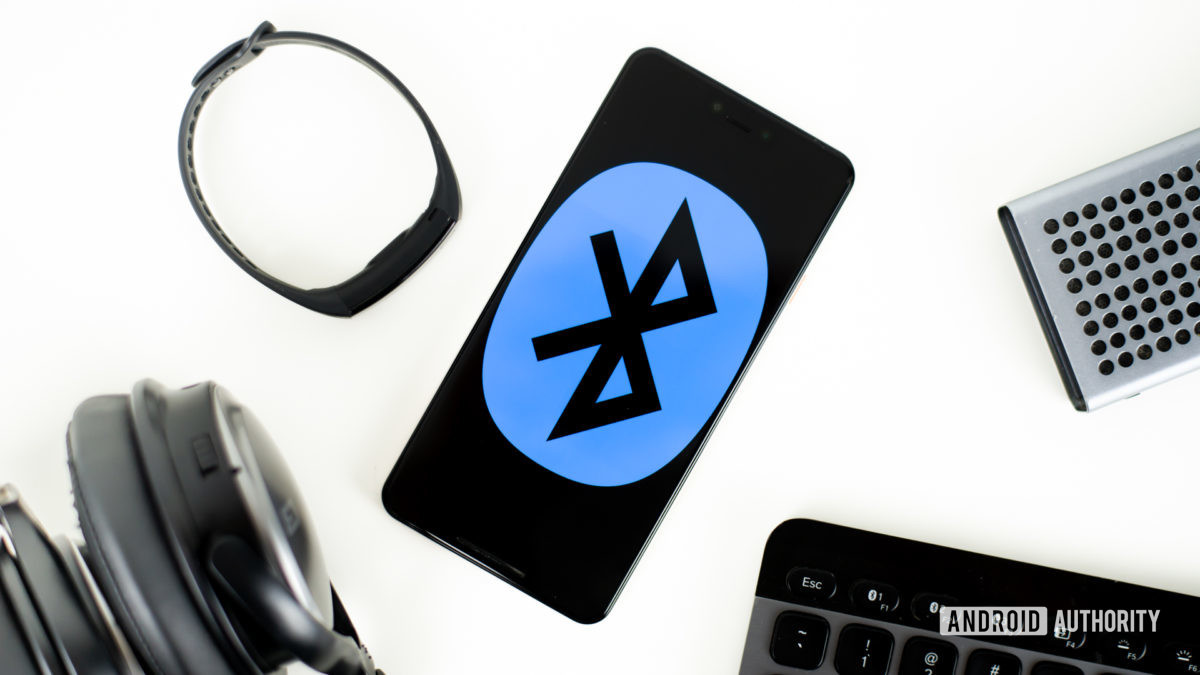 Does Bluetooth drain battery? All wireless technologies need power, but how much is a topic riddled with anecdotes and theories. Despite advancements in Bluetooth technology, it’s still a pretty common belief that you’ll get much more life out of your phone by turning off Bluetooth, Wi-Fi, NFC, and various other bits of technology when you’re not using them.

I find these old habits hard to break. Yes, I still turn Wi-Fi off when leaving the house and disable Bluetooth until I listen to music. But is that necessary in the modern age of “smart” technology? How much battery do I waste if I leave Bluetooth on while I’m not using it? What about playing music over Bluetooth? Is the battery drain higher than using speakers or wired headphones? To find the answers to these questions, we grabbed a handful of phones and ran some tests.

To get a grip on exactly how using Bluetooth impacts battery life, we picked up five different smartphones from 2020. In this test we have the Samsung Galaxy S20 Plus, Huawei P40 Pro, ZTE Axon 11, Xiaomi Poco F2 Pro, and Realme X3 Superzoom. We ran each of them through two unique scenarios and monitored the results with our in-house testing software.

The first is a typical daily battery drain scenario designed to find out if turning off Bluetooth actually saves battery. To do this, we performed two sets of tests. One test with Bluetooth off and another with Bluetooth on but idle — i.e. not connected to anything — to compare the results. The test itself consists of three cycles. The first features 90 minutes of web browsing followed by 90 minutes of sleep and then 90 more minutes of browsing. The phones then sleep for 16 hours in the second cycle to give us a good look at idle power draw. The third cycle repeats the first cycle.

The second set of tests simulates a more demanding Bluetooth specific use case and should determine how much Bluetooth impacts battery life when you’re actively using it. To simulate this, we monitored video playback for 4 hours straight, as you might do on a long flight. This series consists of a control test with Bluetooth off, Bluetooth on but no connection, and finally the video audio over Bluetooth using the basic SBC audio codec.

We locked each display brightness to 200 nits to keep the tests fair. Mobile data, NFC, and anything else was also disabled on each handset for all these tests. With the exception of leaving Wi-Fi on in the first scenario so we can web surf.

We also took averages of the results to give us a better overall look at Bluetooth battery drain. All of the graphs in this article are based on an average based on testing across the five aforementioned devices.

So… does turning Bluetooth off save battery?

Over the course of our 26-hour “typical day” test, leaving Bluetooth on consumed just 1.8% more battery compared to the test with Bluetooth off. On average, our devices consumed 49.4% of their battery during this test with Bluetooth off versus 51.2% with it left on. Extrapolating this to a full charge cycle, Bluetooth typically consumes less than 4% extra battery life. So, leaving it off might add 10 to 15 minutes of extra time for a device that typically gives five hours of screen-on time. Peanuts really.

There was a small difference between the devices we tested. The Huawei P40 Pro and Poco F2 Pro saw the biggest difference with Bluetooth on and off — a 3% difference. Meanwhile, the Samsung Galaxy S20 and Realme Superzoom recorded slightly less power drain with Bluetooth on. This is likely down to a margin of error, highlighting just how little impact Bluetooth actually has on batter life.

For a more detailed breakdown, check out the graph below: 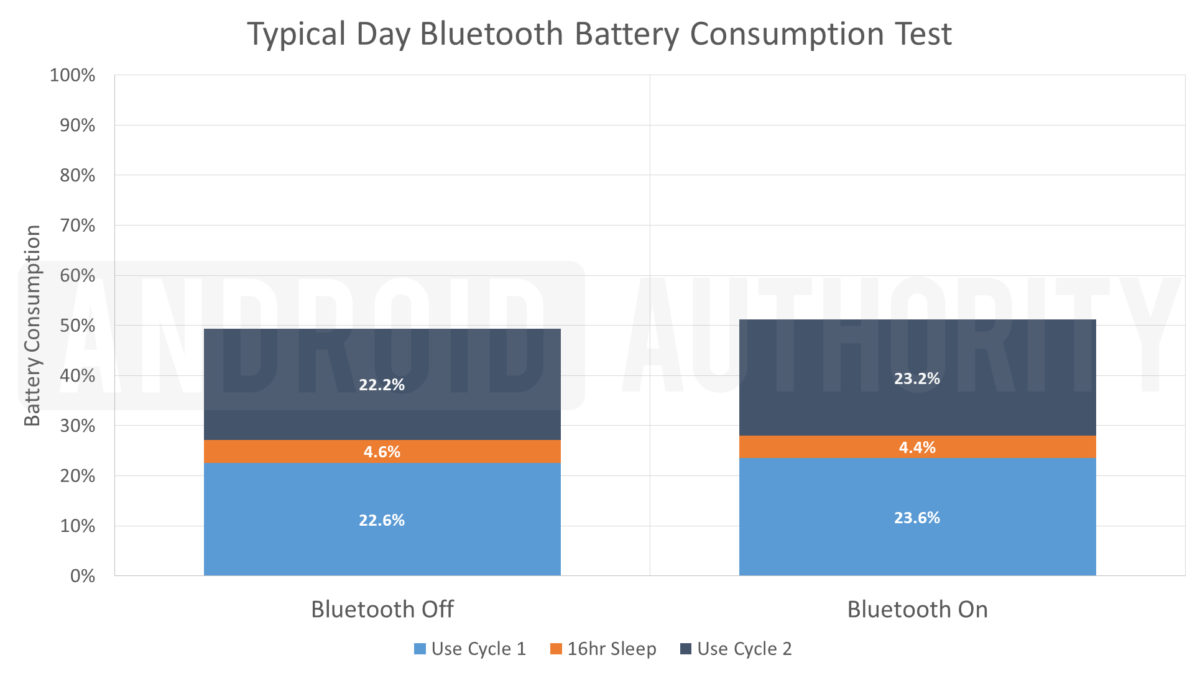 What’s noticeable here is that idle battery drain is essentially the same over a 16-hour sleep period. We can chalk the 0.2% difference up to a margin of error — regardless of whether Bluetooth is on or off. Meanwhile, on average our devices showed a quite consistent 1% difference in battery drain during our four hour 30-minute use cycle. Again, this is so small it makes practically no difference to battery life.

This highlights that modern smartphones put Bluetooth radios to sleep when not in use. They’re only awake and periodically scanning for pairable devices while your smartphone is awake. So, you really don’t need to worry about turning Bluetooth off before you go to bed.

How much battery does Bluetooth use?

So, Bluetooth doesn’t really impact battery when left on but not in use. What about when you’re actively using Bluetooth on your phone? Well, our four-hour video playback test showcases a similar battery drain difference across all five devices.

The comparison between Bluetooth off, and on but not connected reveals an average of just 1.6% more battery drain over a four-hour period. That’s still very small but indicates more power drain than our earlier test. Likely because our devices are in constant use for a prolonged period of time, so the Bluetooth radios spend less time asleep.

Extrapolated to a full charge cycle, watching video while leaving Bluetooth on but not connected increased power consumption by about 6.6% percent on average. That’s still pretty small but not nothing. However, this constant video playback scenario is highly unlikely in the real world. 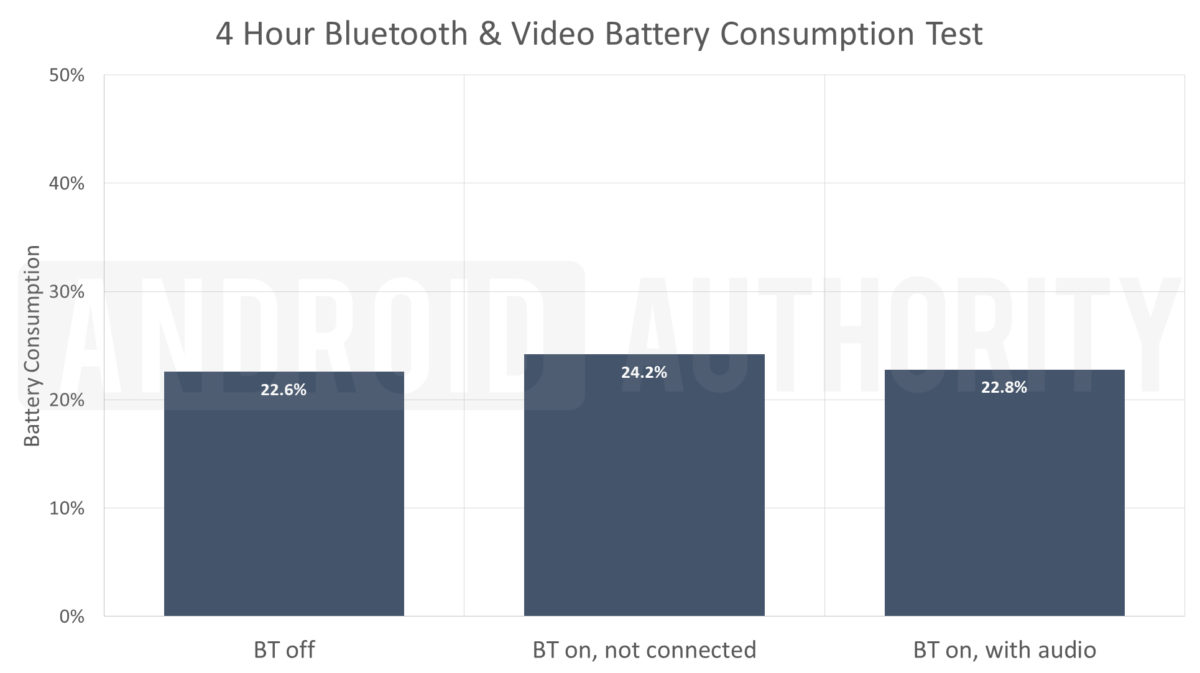 Interestingly, there’s quite a lot of variation between different smartphones. The Samsung Galaxy S20 Plus recorded exactly the same result with Bluetooth on and off. Meanwhile, the Realme X3 Superzoom is the worst affected, clocking in an extra 4% battery drain over four hours.

The reason for this discrepancy is likely down to smartphone hardware and software optimizations. The Galaxy S20 Plus’s Exynos and Huawei P40 Pro’s Kirin chips will use different radios to the other phones’ Snapdragon SoCs. Similarly, each Android software variant likely has different algorithms for Bluetooth wake-up and pairing scan intervals. No two devices will see exactly the same amounts of battery drain, but results vary from zero to negligible in any case. 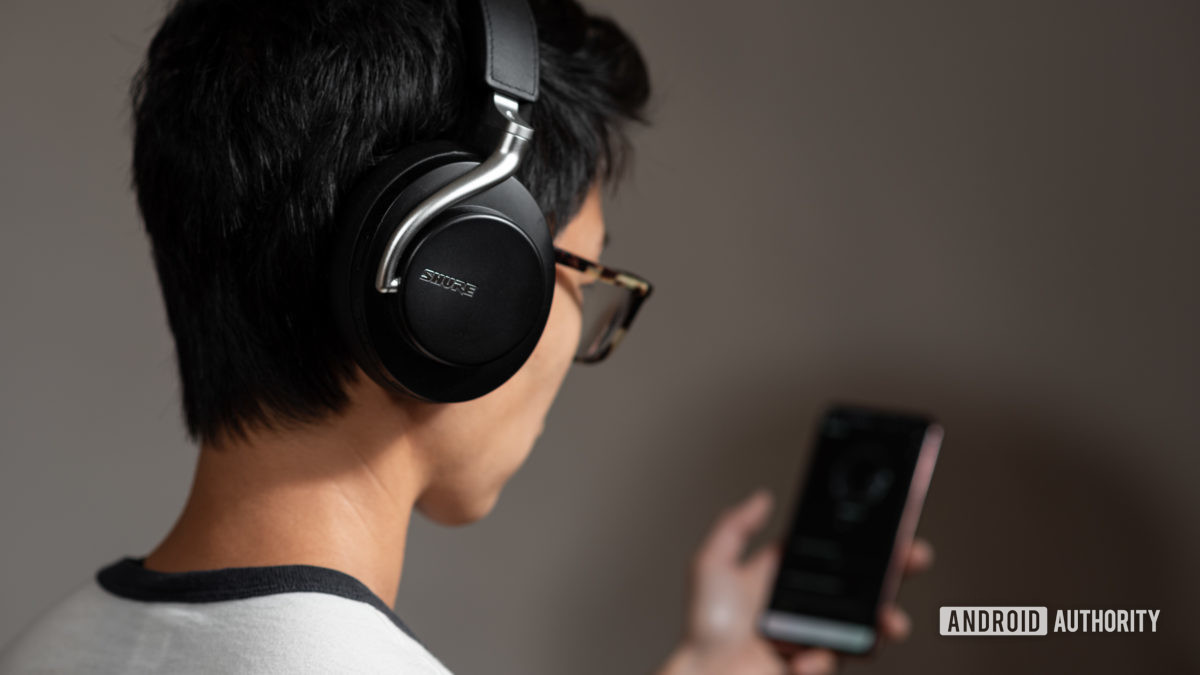 This is a seriously good question and the reason why we conducted these second tests with audio playback as the baseline use case. After all, it’s what most people use Bluetooth for these days.

The reason for this is because Bluetooth audio encoding algorithms run efficiently on digital signal processors (DSP) found inside modern smartphones — consuming very little power. At the same time, audio amplifier circuits switch off when playing back audio over Bluetooth. This balances out the power draw from the Bluetooth wireless chip. The louder you listen, the bigger this power saving becomes. 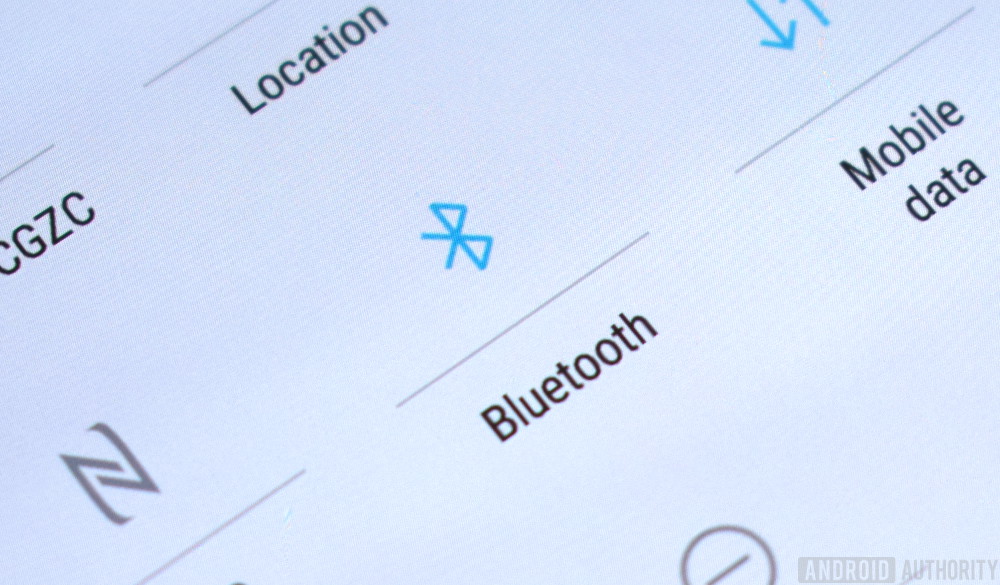 Our test is only so accurate and doesn’t take into account every possible Bluetooth use case. That said, it gives us a good look at how Bluetooth affects battery life from a big picture perspective. There are small variations in battery drain between smartphone idle and screen-on scenarios, but we’re only talking mere minutes of difference between on and off.

Importantly, Bluetooth doesn’t appear to affect battery life when phones are idle. So, it’s not going to run down your battery during long periods of inactivity or if accidentally left on overnight.

The vast majority of users won’t see any noticeable amount of extra battery drain if they forget to turn Bluetooth off. Turning it off is still a good idea to avoid connecting to unwanted devices, and if you’re super concerned about security.

But to answer our title question, Bluetooth drains very little of your smartphone’s battery. You really don’t need to worry.