We had seen this kit discreetly hidden in a video by Linus and we told you about it in this brief, indicating that we were thinking of an attempt to cool down the Peltier effect.

It is now official, in collaboration with Intel, EK WB is releasing the QuantumX Delta TEC. This is a cooling system, dedicated a priori only to Intel CPUs compatible with the LGA1200 socket. It combines a waterblock with a TEC, a Peltier-type thermoelectric cell.

But how does it work?

To sum up, a Peltier cell is composed of two 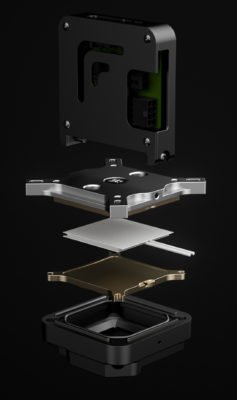 ceramic plates, one of which cools and the other heats. As you can imagine, in our case, the cold part will be in contact with the processor and the hot part with your liquid cooling loop whose role will be to absorb this heat and evacuate it.

The power of these cells, expressed in watts, differs according to the model. The higher the number of watts, the more cold you will get but the more you will have to cool the hot side. This is why the use of a liquid cooling system is preferred!

Needless to say that a good power supply will be necessary in order to use this QuantumX Delta TEC in the best conditions!

An exclusive collaboration between EK and Intel :

So obviously there are a few subtleties that we will try to summarise here. The QuantumX Delta TEC is a waterblock combined with a Peltier cell that allows the processor to be kept at temperatures below room temperature. This regulation will be done via in-house software. 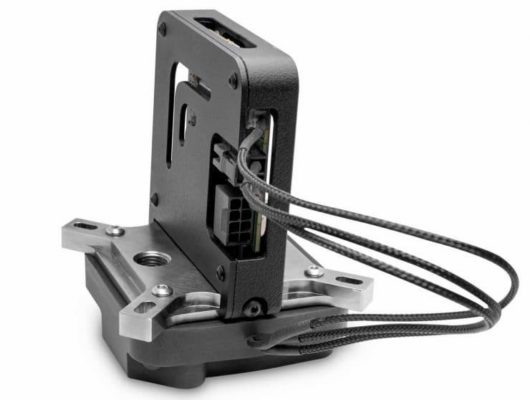 The official version is given by Edvard König, founder of EK and Kat Silberstein CEO Americas at EK :

“To do this, EK uses Intel Cryo Cooling Technology, which the company defines as a unique combination of hardware, software and firmware designed to help unleash performance.

This system is an exceptional application of cooling the processor with temperatures below room temperature using a thermoelectric cooler (TEC) plate while continuously monitoring and adjusting temperatures dynamically, achieving an ideal operating environment for sustained gaming performance. 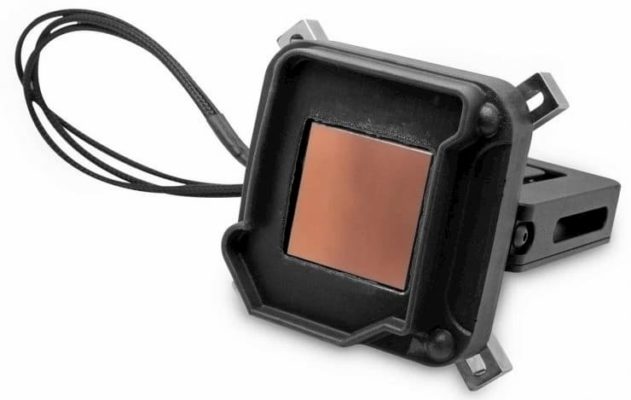 This search to “modulate” the cooling power according to the power demand on the CPU undoubtedly enables EK to better manage two fundamental problems related to the use of such a cooling system. The management module is placed vertically above the waterblock.

First of all, the design of the main block was worked on to reduce thermal condensation. It benefits from an insulating envelope so that it does not break out if the temperature of the block falls below that of the ambient temperature. An imposing radiator will be necessary to help dissipate the heat from the warm side.

The second consequence will therefore be a considerable reduction in electricity consumption, which is the weak point of these systems. The QuantumX Delta TEC will still need to be supplied with 200W via an 8-pin PCI-Express power connector.

If this innovative solution is interesting, it will be appreciated at a high price, since the official EK WB press release announces a public price of 349.90 euros, which can already be pre-ordered on the brand’s website.

der8auer already has a sample :

Our colleague der8auer is lucky enough to already have in his hands a sample that he offers you to discover on video. We will do our utmost to give you our opinion on this EK-QuantumX Delta TEC. He was able to push his 10900K at 5.6 GHz under Cinebench R15.

The post The EK QuantumX Delta TEC is official appeared first on HardwareHeaven.com.