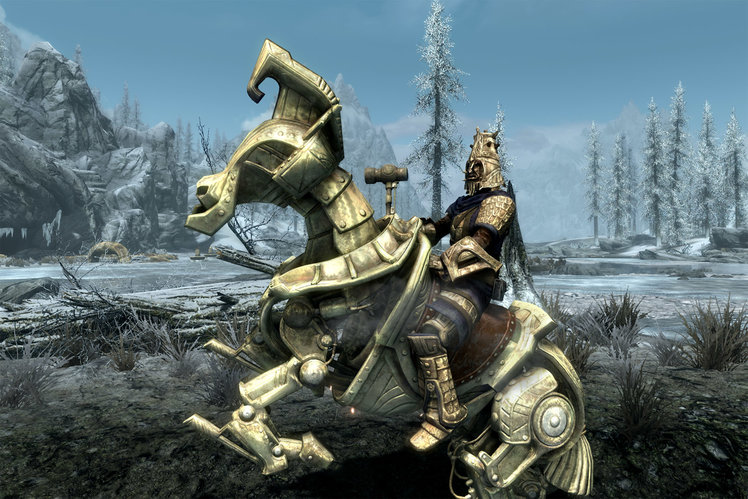 When The Elder Scrolls V: Skyrim launched back in 2011 it set the benchmark for role-playing games. Its huge gameworld, littered with fantasy characters and enemies, combined with a vast skill tree and fine-tuned levelling-up system, being altogether more novel-like in its scope.

Many players ploughed dozens of hours, days, weeks or more into the game. Because even back then it felt like more than that: almost like a second fantasy life on screen; one where you cared about listening to the characters’ stories, to the point that running errands and collecting mundane items became personal enough for it to be funas respite from all the swordplay and magic.

But that was over a decade ago. Yup, two whole console generations back, or umpteen PC graphics cards. Obviously a lot has happened in the world of gaming since (and we’ve also grown more grey hairs), so can a classic title find new life beyond the nostalgia? Well, Skyrim is a classic for a reason…

Storyline: The second time around

If you’ve never played Skyrim before then you’re in for an in-depth treat. Even if it’s a repeat play for you then, frankly, there are so many factions, missions, upgrades and potential pathways to work through that in many ways it will feel all-new once again anyway. While we’ve recalled plenty of storyline specifics on our second major playthrough, there are all manner of side missions that have felt totally fresh.

From a story perspective the non-spoiler summary is that dragons have returned to Skyrim. You, who turn out to be a Dragonborn, have to work out for what reason and purpose that is, which brings a whole adventure in developing your skills in order to continue along that mission.

Level-ups, which you’ll achieve by developing various skills through action, cover your basic trio of pillars: health, or how much of a beating you can take; stamina, which is used in portions for running and power attacks; magicka, which is the volume you have available to cast spells.

These are important because you need to think somewhat thoroughly about whether you want to go all-in on magicka and be a true mage, spread your bets across the three to be capable in various scenarios, or go full-on brute force in building health and stamina for more traditional one- and two-handed weapon attacks. 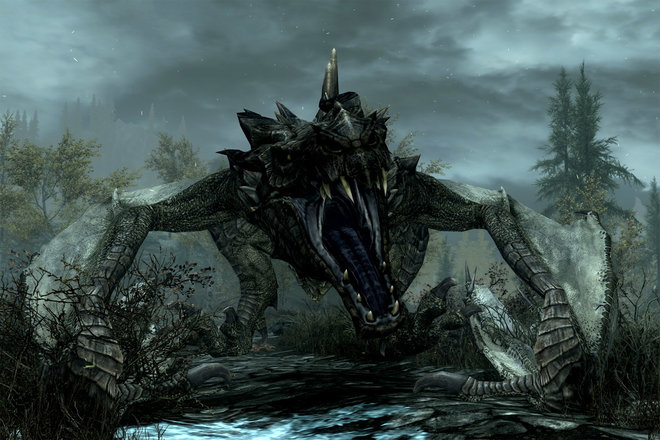 The skill tree is far more complex than the trio of pillars, and you’ll need to pay close attention to it and where to invest your level-up perks. It’s all too easy to level-up skills that seem prevalent in the early stages of the game (combat, usually), only to realise that it may have been a better idea to progress your blacksmithing or enchanting abilities sooner. There’s no turning back, so think wisely, and think outside of the box if you want to have a bit of extra fun with the game – maybe you want to be master pickpocket and lockpick, rather than the ultimate warrior.

Skyrim is truly open-world, a sprawling and mountainous landscape that, at times, can be rather tricky to navigate if you lose track of where you’re meant to be going (the Clairvoyance spell is your friend in this regard, which lights the path). Still, playing on PlayStation 5 for this review, the up-to-date graphical fidelity – running at 4K 60fps – is often eye-catching enough to just make you stop and take in the scenery. Which is no mean feat for a decade-old game that’s clearly showing its age. 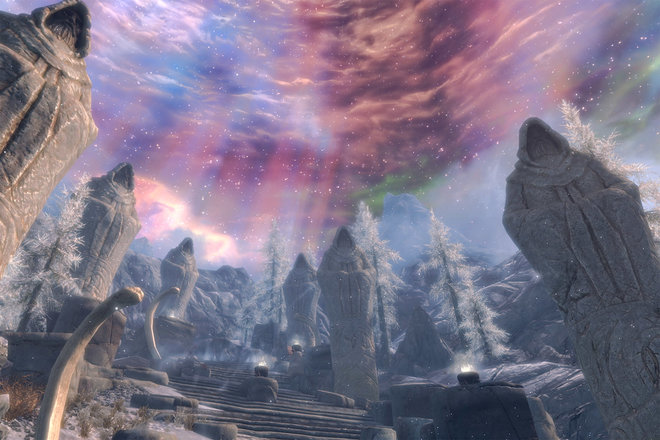 When the game was first released there was nothing on such a scale. Even now, Skyrim’s map is so large that you’ll need to scroll around it – and that’s excluding the interior maps and additional off-map areas beyond. As you uncover caves, castles, cities and much more besides they’ll populate your map – opening them for fast-travel, which is an essential to navigate such a giant landscape and finish off missions. Part of the fun is exploring, of course, which is essential – and, like a magpie, you’ll soon get addicted to searching every chest, dresser, urn and whatever else for useful loot.

We play Skyrim in first-person, but a third-person perspective is also available (the latter compulsory while on horseback). Combat in either perspective does show its age though: there’s no the finesse of blocking and attacking sequences here as you’ll find in some more modern titles. But once you’ve got on board with it – not to mention the retro controls (their mapping is initially peculiar for any first-person fan) – it’s easy to engage with and figure out your static, charge, strafe and, erm, running backwards tactics. 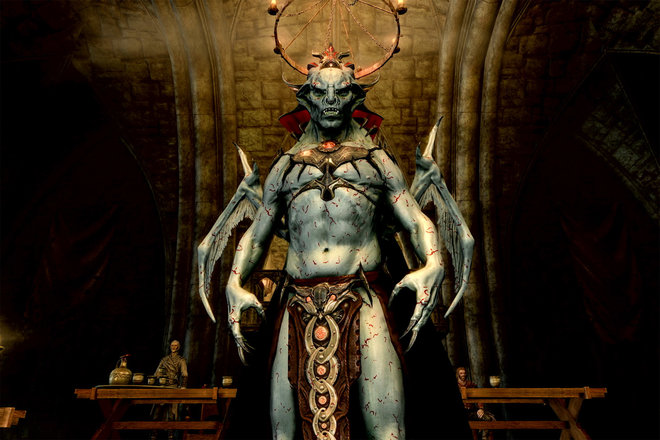 There’s no order to the way in which you have to play through the game, which further adds to the open-world nature of it. However, you’ll soon learn if you’re not really supposed to be somewhere when mighty powerful enemies dispatch you in a single strike. It can be fun to challenge this, however, by going in with an ally, potion heavy to boost your stats, dropping some scrolls to cause carnage and crossing your fingers. Our advice: save, save, save again – as you’ll want to avoid traipsing the same chunk of landscape on repeat only to get squashed by a mammoth (plus, even in this iteration of the game, stability isn’t 100 per cent: we’ve had crashes every other day, so quicksaves are an essential).

As the game develops you’ll advance your Dragonborn word of power ‘shouts’ – endemic magic that you can cast on a limited basis and which become essential in completing certain quests (impassable areas in specific catacombs or ruins, for example) – which you can expand by seeking out ancient words and dragons to slay. The two go hand in hand for reasons that become clearer as you follow the key storyline along. 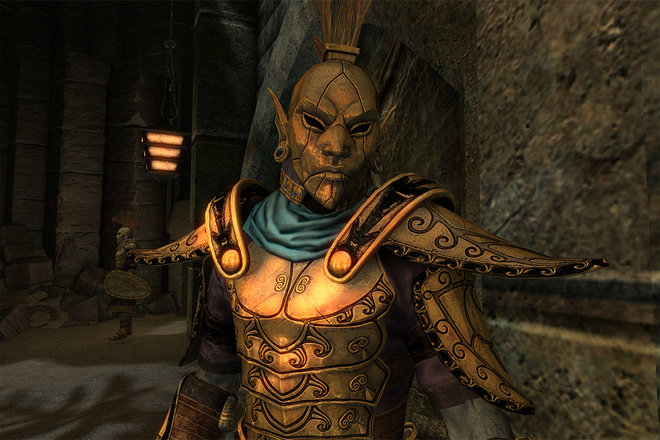 It’s yet another string to Skyrim’s extensive bow. And while it may sound complex to have such variety – level-ups for magicka, health, stamina; level-up perks for a huge skill-tree; shouts in addition to magic; alongside gigantic items lists and quest breakdowns – the game handles your progressive understanding of the importance of each in such a delicate manner than it just becomes second nature.

Our only real complaint is that the menu systems feel particularly old skool in their approach; it’s not quick to find or select some of the items you might want if you’re carrying a lot, for example, and while sub-categories (weapons, apparel, ingredients, etcetera) can help, you’ll still have so much kit on your character at any one time that navigation could have been improved. The same with quests: it’s possible to toggle their activation on or off, but many of the Misc quests lack the relevant on-map pointers, or seem to bug out sometimes. And the number of times you’ll be quick-loading the map slash items list slash quest list can get old rather fast.

The other area that pretty much sticks to the Skyrim of old is the character acting. As in, literally, Bethesda only used a handful of actors to voice the full cast. It’s rather amusing how a key shaman in one town sounds identical to an unimportant passer-by in another. Similarly, the facial models are limited, in that many character models, faces and animations are identical. That’s what 10 years does for you, though, videogame companies put a lot more work (and therefore staff time) into such nuances these days. 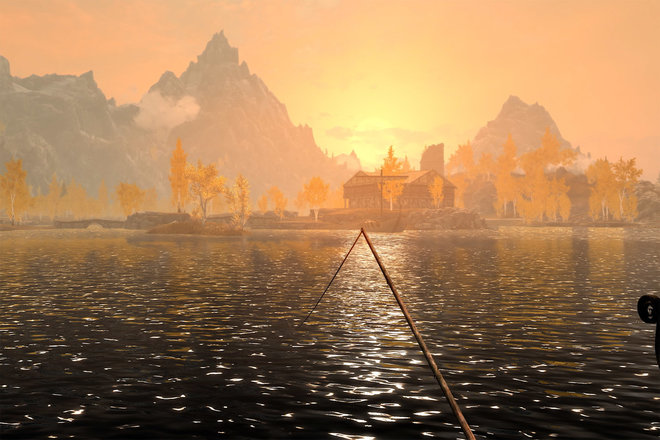 The Anniversary Edition of Skyrim is largely the same as the Remastered Edition from 2016, in that it includes all three DLC packs (Dawnguard, Hearthfire, Dragonborn), along with additions such as (optional) Survival Mode – which is a hellish version of the game for the hardcore only whereby you need to keep yourself fed, watered and well rested in order to be remotely capable – and features such as fishing, marriage, new spells, armour, alchemy ingredients, and more besides.