Windows 11 is here to help you focus. 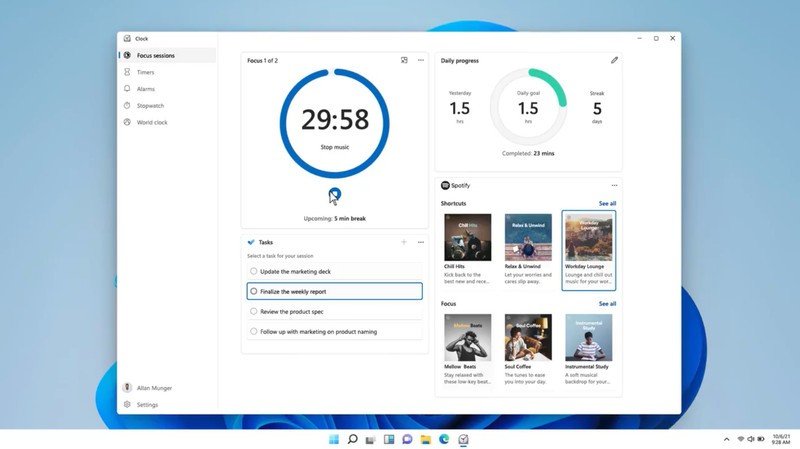 Have trouble focusing on tasks and getting work done? Windows 11 knows the feeling and has a feature built right into its Clock app to help you out: Focus Sessions. This feature will essentially merge To Do and Spotify into one efficiency-minded package within the already useful Clock app.

With Focus Sessions, you’ll be able to jam out thanks to Spotify integration, stay on top of upcoming breaks, keep track of the day’s remaining tasks, and more. The idea is to give you a period of time wherein you focus up and crush whatever task it is you need to get done.

Focus Sessions were revealed by Panos Panay, Microsoft’s chief product officer, over on Twitter. Here’s the snazzy little tweet-attached video he showed off to announce the Focus Sessions feature:

Another first look from the team…#FocusSessions on #Windows11 coming soon. This has been a game-changer for me, especially with @Spotify integration #Productivity #Creativity #WindowsInsiders pic.twitter.com/HfJh4niDiS

This is the second bite-sized announcement video Panay has released via Twitter within the past 48 hours. Just yesterday, he shared Windows 11’s new Snipping Tool with the world.

In both videos, a lot of Windows 11’s overhauled app icons were present, leaving the door wide open with potential regarding what Panay might debut. Which app do you want to see get the boppin’-music-loaded 15-second teaser treatment next? Groove?

A few of these briefly glimpsed icons might not just be visual overhauls; they might be replacements for existing default apps altogether, so strap in for a wave of changes. And be sure to keep an eye on both Panay’s Twitter as well as right here on Windows Central to see what’s next in the world of Windows 11.