It’s been a couple of months now since Google announced the Pixel 5 – Unfortunately we didn’t quite get to a timely review of the device due to other important industry coverage. Today I wanted to revisit the phone in a briefer format review, revisiting some important aspects of the phone such as performance, battery life, and add a few comments about the camera capabilities.

The Pixel 5 is a change of tactic for Google, with the company opting to go the route of a lower-cost “premium” or high mid-range component configuration, rather than setting up the Pixel 5 as an all-out flagship phone. Given the company’s product release cadence over the years, always releasing new phones towards the end of the year, just around the corner of the spring next-gen releases. This schedule had always been a disadvantage for Pixel flagships, so maybe Google’s change of strategy here to go for the mid-range is a more sensible approach.

Starting off with the SoC, as we’ve discussed it over the last few months, the big difference for the new Pixel 5 is that it comes with a “premium” range Snapdragon 765 chipset from Qualcomm, rather than using the contemporary Snapdragon 865 flagship SoC. This is undoubtedly a cost-cutting measure for Google to be able to achieve this new price point of $699 / €629.

The SoC should still be plenty performance for every-day usages thanks to the two Cortex-A76 big cores, with one of them clocking up to 2.4GHz and the other one at 2.2GHz, however it’s still going to be a notable downgrade compared to the flagship SoCs which employ both newer CPU cores as well as clocking them higher. The SoC’s Adreno 620 GPU is also going to be a key factor in the general performance of the Pixel 5, making some big gaming performance compromises that we’ll cover in more detail in the GPU section.

Google dons the Pixel 5 with 8GB of LPDDR4X memory and a singular storage option of 128GB, without any expandable storage. 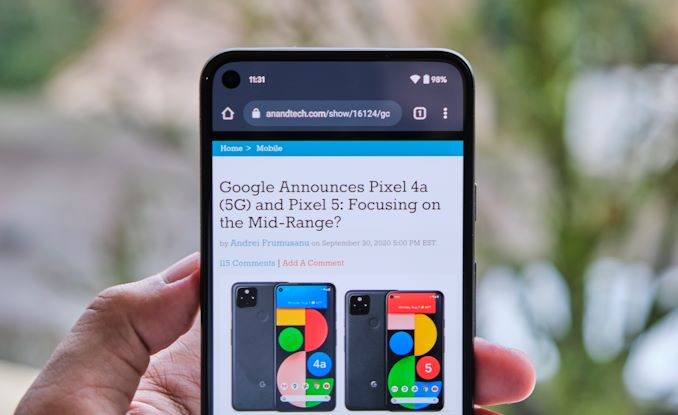