GPD, well-known for its various Windows and Android-powered consoles like the GPD Win 3, has revealed almost all the details of its next Windows-powered gaming console, the GPD WIN Max 2, and it’s looking very promising. The new model will come with upgraded Intel and AMD processors, a larger display with narrow bezels, and more.

Starting with performance, the GPD WIN Max 2 will come in Intel or AMD versions, and both are very promising in their own right. The Intel model will come with an Intel Core i7-1280P (coming from the Core i7-1195G7 in the previous model), which is Intel’s top-tier CPU for ultra-mobile PCs. This processor has a total of 14 cores and 20 threads, making use of Intel’s new hybrid architecture. There are 6 performance cores capable of boosting up to 4.8GHz, and eight efficient cores backing it up. It has a base TDP of 28W, but it can go as high as 60W. Despite the increase in TDP, the power efficiency of the hybrid architecture could result in better battery life for this new model.

That also means you can Intel Iris Xe graphics, which are mostly unchanged from the previous model. Intel didn’t make any major updates to graphics with its 12th-generation mobile processors. Still, Intel Iris Xe can deliver a solid experience in many games, as long as you’re willing to dial down some settings.

As for the AMD version, you can expect to see the new AMD Ryzen 7 6800U processor, which is also a big upgrade from the Ryzen 7 4800U that was in the original GPD WIN Max. This new processor is based on the Zen3+ architecture and it comes with 8 cores and 16 threads, plus some under-the-hood improvements compared to the previous generation. The big upgrade here is in terms of graphics, though. This processor features AMD’s latest Radeon Graphics 600M, which promises faster GPU performance than an NVIDIA GeForce MX450, a discrete laptop GPU. That should allow you to play even more modern games at higher settings, and it’s all thanks to the RDNA2 architecture, similar to what’s inside the Steam Deck.

A major upgrade with the GPD WIN Max 2 will be the display, which will come in a much larger 10.1-inch panel compared to the original WIN Max’s 8-inch screen. GPD has significantly shrunk the borders around the display, even removing space for the webcam on the bezel. The display now comes in up to Quad HD+ (2560 x 1600) resolution, though the default setting is Full HD + (1920 x 1200). Both are still an upgrade from the 1280 x 800 of its predecessor, though, so this should be good news if you want a sharper screen. As with the previous model, the display supports 10-point multi-touch and it even works with active pens with support for 4,096 levels of pressure. 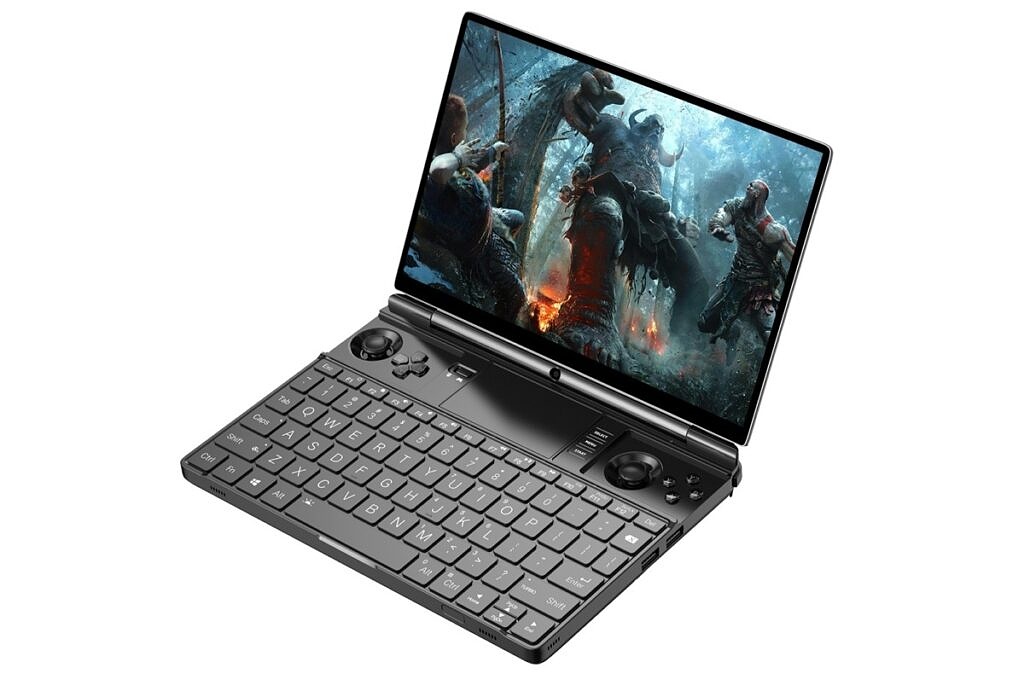 Because the bezels shrunk so much, the console isn’t that much bigger than its predecessor, even though the screen is much larger. Itt’s still slightly bigger, though, now measuring 228mm x 167mm. The previous model measured 207mm x 145mm, but it was also thicker.

Without space for the webcam on the bezel, GPD has moved it to the hinge, which is somewhat reminiscent of Nintendo’s DSi consoles back in 2009. This won’t be ideal if you’re using it like a laptop, but it should work well enough when you’re holding the console in your hands.

The larger design also makes room for a more spacious keyboard for typing, in addition to the usual Xbox-style controls, including analog triggers and sticks.

It has Thunderbolt 4 and USB4

In terms of ports, the GPD WIN Max 2 is also not lacking in at all. It has two USB Type-A ports on the side for peripherals, plus another USB Type-A port, HDMI, and two USB Type-C ports on the back. One of those Type-C ports is a big deal, though, because it now supports USB4 on the AMD models. Previously, you had Thunderbolt 4 support on the Intel model so you could hook up an external GPU or display, but the AMD version didn’t support that. With USB4, though, that should now be possible on both variants.

Another important feature is support for both microSD and full-size SD cards at the same time. If you need more storage space and you don’t want to fiddle with the SSDs, you can easily install SD cards and use that for data that doesn’t require super-high speeds.

GPD has also moved the power button to the edge of the chassis, on the front side. Not only that, but the power key now has a fingerprint reader built-in, so the laptop supports Windows Hello.

All in all, the GPD WIN Max 2 is looking like a very promising handheld Windows console. GPD has yet to say when the device will be available, or even when the Indiegogo campaign will start, but hopefully, it happens sometime soon. We also have no word on pricing information just yet.