There’s no denying how important a keyboard can be. They are one of the key (no pun intended) methods of interfacing with the computers we use for so much of our work and play. A bad or good keyboard can make or break one’s user experience accordingly, and so it’s best to put a bit of thought into the purchase of one.

There are a many choices to consider: mechanical or membrane, Cherry MX or Brown switches, chiclet or classic, wired or wireless, etc. While wired is still king for those who want minimum latency or downtime, there are a number of reasons to need a wireless keyboard:

Since I like to work and play from a living-room setup with a 55″ inch TV and eGPU and am a proud rabbit-father, I’ve been a wireless keyboard and mouse fan for years now. I’ve tried a few different options for my setup over the years, and in this article I’d like to share my thoughts regarding a Logitech K400 Plus, K830, and MX Keys wireless keyboard comparison.

This article is limited to wireless keyboards I have spent quite a bit of time using, and thus it does not include keyboards I have not personally used. There are a lot of brands out there, but I personally am a fan of Logitech for their excellent reliability and support of mice and keyboards. 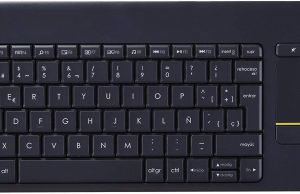 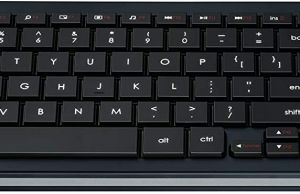 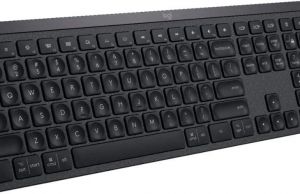 Just keep it in mind that while I play games, I’m not a competitive gamer and I’m not concerned with getting the lowest ms response time. These aren’t super-fancy high-performance gaming/RGB keyboards, but their performance is generally enough to satisfy all but competitive gamers, I think.

Debuting in 2015, the Logitech K400 Plus is not the newest keyboard around and even resembles a bit of a classic at this point. But, like all classics, it stays around for a good reason or two. In the K400’s case, it’s inexpensive, rugged, decent to type on, and has batteries (two AA batteries, unlike the internal Li-ion cells that power the K380 and MX Keys) that last for ages. If you’re looking for a non-nonsense, budget keyboard for your HTPC or even desktop, you can’t go wrong for the price — as long as you won’t always be typing in the dark.

The K400 Plus is a great no-frills HTPC keyboard.

The only thing I didn’t like about my K400 Plus was the lack of backlight. Thus, when I found myself needing a wireless keyboard after a rough moving situation left me without my belongings for more than 30 days, I bought the K830 assuming it would be a straight upgrade. Despite the higher model number, however, it turns out that the K830 was released even before the K400 Plus was — in 2014! Thus, I actually found that the user experience was considerably worse for me on the backlit K830 than the K400 Plus.

Let’s start with the positives, though. The K830 has an internal li-ion battery, and it charges with a micro-USB B cable. It’s robustly constructed, and has a rather handsome black finish, that makes it more appealing to the eye than the K400 Plus. Unfortunately, that’s where my positive impressions ended.

The biggest problem I have with this keyboard is the keys. Firstly, the actuation force (pressure required to depress a key) seems much too low, which gives the keys an extremely “mushy” throw rather than a more “clicky” one. The second problem actually compounds the first, and that is closely positioned and “jiggly” key caps with sharp edges, to boot. The result is that you (or me, anyway) will constantly end up hitting the corner of another key with your finger, which will be uncomfortable at best and introduces a typo at worst. My typing accuracy with the K830, even at night, ended up being far worse than my experience with the K400 Plus.

Still, it looks nice, is backlit, and typing itself is a highly subjective thing. But make sure you try this keyboard in person to see how well you like typing on it, or are able to return it if you buy it online and don’t like it.

Visually similar to the K400 Plus but with a blacklight, the K830 introduces more problems than it fixes.

The mushy key feedback and constant typos on the K830 drove me to quickly look elsewhere for a keyboard I could enjoy during prolonged usage. What originally led me to the K400 Plus and K830 were the integrated touchpads, but what I found was that I would almost always be using my MX Master 3 mouse, anyway. Freed from this constraint, after testing the feel of the keyboard at a local Best Buy, I decided to try replacing my K830 with the MX Keys.

The MX Keys is the most expensive option of the three (I spent just under $100 for mine), but that price tag nets you a really well-built low-profile keyboard with (what I consider) outstanding key feedback. The keys are so stable under your fingers and provide just the right amount of resistance — I can’t rave about it enough. The numpad, though not something I use daily, is something that is nice to have for data entry every now and then.

The MX Keys once again has an internal li-ion battery, charged via USB Type-C cable. With backlit usage, the battery life is claimed to be similar to the K830. But without it, the Keys will last you up to 5 months. That’s not bad at all for an internal rechargeable battery. It’s also very solidly constructed, which means it’s not so light that you might forget it’s on your lap like the K400 Plus. You’re definitely going to remember you have this slab of metal on your lap or legs.

Another area the Keys excels is its feature-set, which in this case would be its ability to control up to 3 separate devices using either the 2.4 GHz unifying dongle or Bluetooth. There are dedicated keys for this feature above the “insert”, “home”, and “page up” keys.

A very minor quibble I have is that the Keys lacks the ability to adjust volume with a single key-press when using the F-keys as their primary function (as God intended, I might add ( ͡⚆ ͜ʖ ͡⚆)). The “fn” key is also on the right-side of the keyboard, likely because of the presence of the “cmd” key for our MacOS-using compatriots. This takes a little bit of getting used to, but its position does allow for one-handed adjustment of the volume, at least.

The MX Keys is more expensive and lacks a touchpad, but its layout, feedback, and feature-set make it one of my favourite wireless keyboards I’ve ever used.

This article covers 3 of the most popular wireless Logitech keyboards, but keep in mind that there are other brands out there if you’re looking for something with a bit more flair than these options — particularly if you’re a competitive gamer. For most people though, I think one of the above keyboards will suit your use-cases quite well. The K400 Plus is the budget king, and is a fairly comfortable typing experience. At night, you’ll miss a few keys here and there, but if you aren’t doing the majority of your work at night, it shouldn’t bother you too much. The K830 is compact, backlit, and has internal rechargeable batteries, and if you don’t mind softer/mushier keys, it could be just what you’re looking for. If a built-in trackpad isn’t a requirement for you and you are okay paying closer to $100 for a keyboard, you’ll be hard-pressed finding any wireless keyboards that beat the overall package of the highly impressive MX Keys.

What’s your favourite wireless keyboard? Do you have a differing opinion one any of the products compared in this article? Let us know in the comments!

The post The search for the best wireless keyboard: Logitech K400 Plus vs. K830 vs. MX Keys appeared first on UltrabookReview.com