One particularly annoying drawback of nearly all powerful electronics is the noise generated from their required coolers. Although PC components are getting more and more efficient, the general rule still holds: a powerful PC will come with significant cooling requirements.

This typically is not a concern for gamers, as the noise generated by the PC is often overshadowed by the speakers or headphones. For users who want to build a high-performance entertainment center, however, noise can be a significant issue. When a PC is installed in the living room, it needs to be powerful enough for games, but still quiet while playing/streaming media. The same goes for users who combine their professional and gaming needs into one system or, for whatever reason, they require abundant processing power to perform their profession.

One of the major noise sources inside a PC is the power supply unit (PSU). Low-cost PSUs tend to be less efficient – losing a larger portion of their input power to waste heat – and as a result they rely on a strong flow of air rather than heatsink surface area alone in order to dissipate heat, which makes them quite loud when power requirements are high. Thankfully, improvements in PSU efficiency have been driving down the amount of waste heat (and thus noise) over the years – at least for the higher-end models. As a result, what we often find is that the higher quality (higher priced) a PSU is, the quieter it operates.

In today’s review, we are having a look at a PSU from SilverStone that puts that rule to the test: the Nightjar NJ700, a 700 Watt ATX PSU that is so efficient and well-designed so as to require no active air cooling at all. Although passively cooled PSU are as rare as hen’s teeth, we have seen several passively cooled PSUs in the past, including our recent review of SilverStone’s own Nightjar NJ450-SXL. The unique aspect of the Nightjar NJ700 is the high power output of 700 Watts, which requires an amazingly efficient design to be able to cope with the thermal losses without any active cooling.

We received the SilverStone NJ700 in an aesthetically simple but practical cardboard box. The artwork is simplistic, with a blue/gold color theme and based around a picture of the PSU itself. On the other hand, the box is sizable and with very thick exterior walls, providing ample shipping protection. 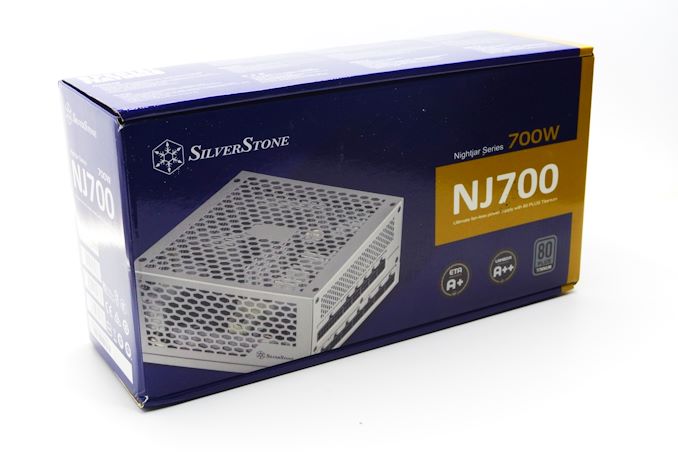 SilverStone usually goes with the bare minimum number of bundled items, but the NJ700 seems to be an exception. Inside the box, we find the mounting screws, the required AC power cable, a thorough manual, numerous cable ties, and five high-quality black/white cable straps. 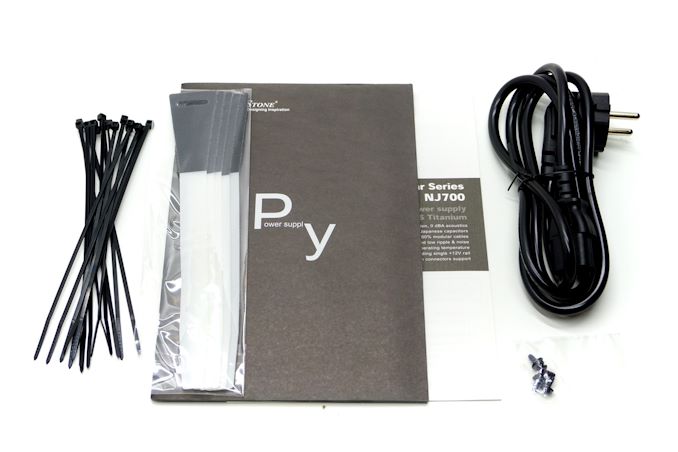 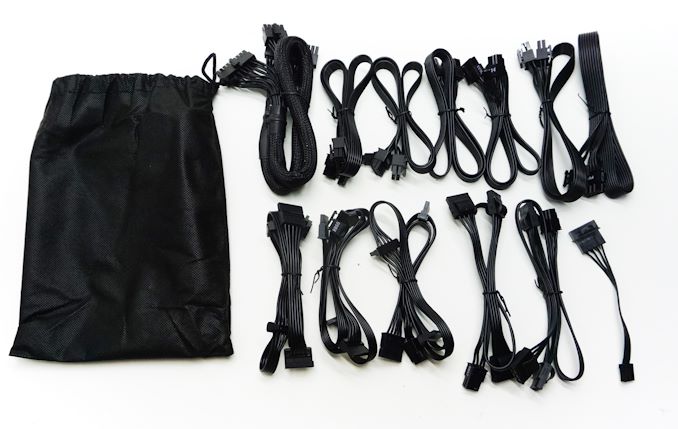 The SilverStone Nightjar NJ700 definitely is an irregular design, with all surfaces except its bottom perforated to allow for the maximum possible passive airflow. The perforation pattern alone is enough to hint the OEM behind this PSU’s creation to a seasoned expert. 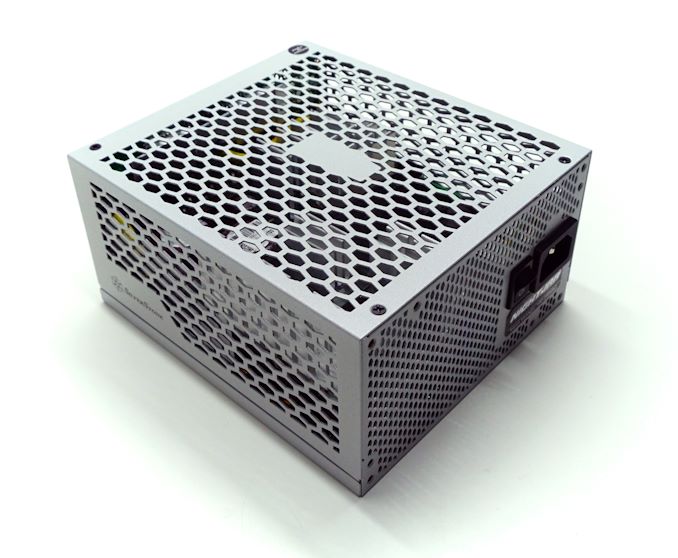 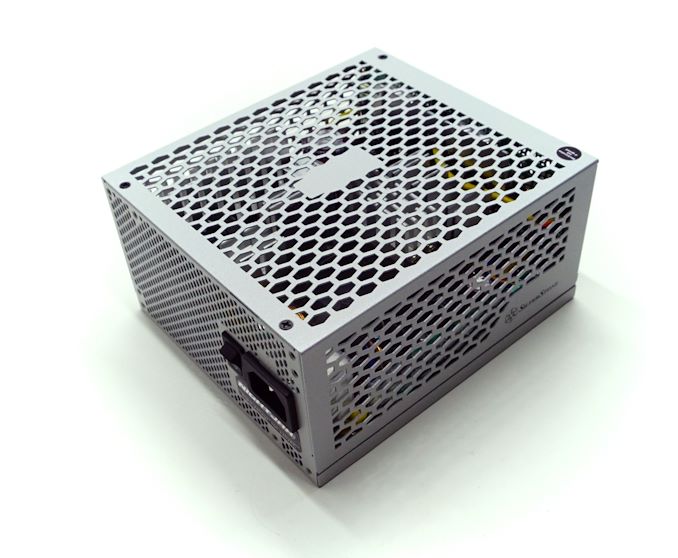 Its chassis is dimensionally close to that of an ATX unit but the NJ700 is 170 mm long, making it a bit longer than what the ATX standard dictates. Still, there should not be any clearance issues with any but the most restrictive of PC cases. Due to its thermal design, however, we would not recommend installing it inside a case with a tight PSU cover because it would essentially block any heat transfer from the unit. The NJ700 is designed so as to be installed with the vents facing upwards, letting the hot air rise and ultimately exit the case via other fans or vents. 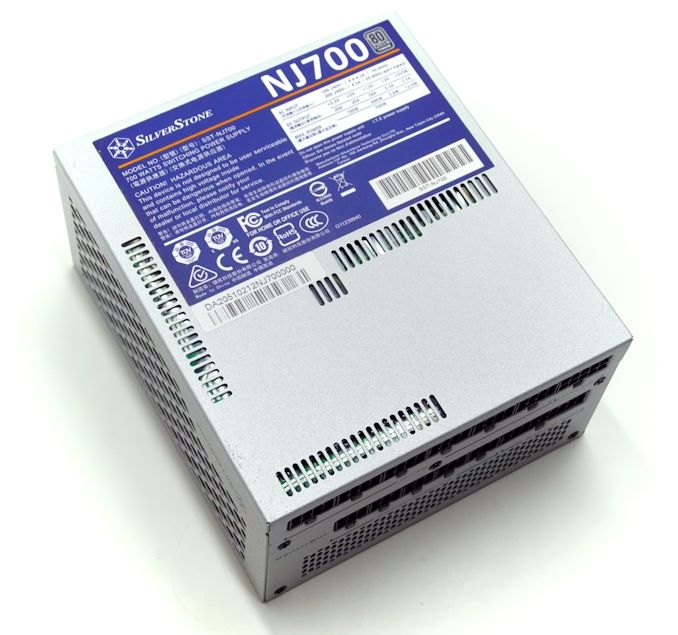 In order to leave the heatsinks unobstructed, the designer moved the sticker with the unit’s electrical specifications and certifications to the bottom side of the unit. Even there, the sticker was limited to less than half the surface area, as small vents have been placed under critical components. 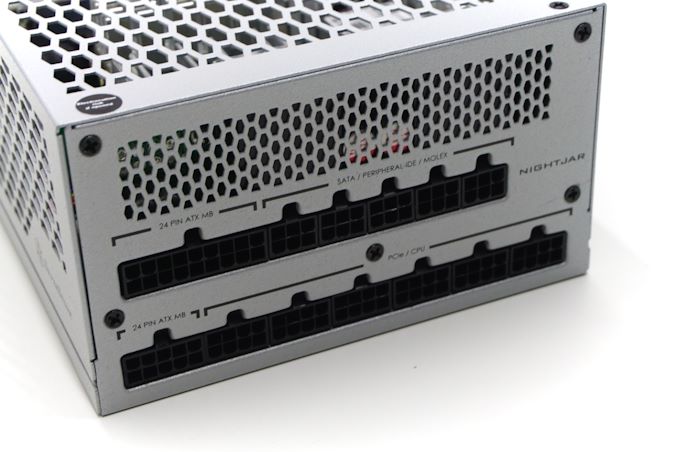 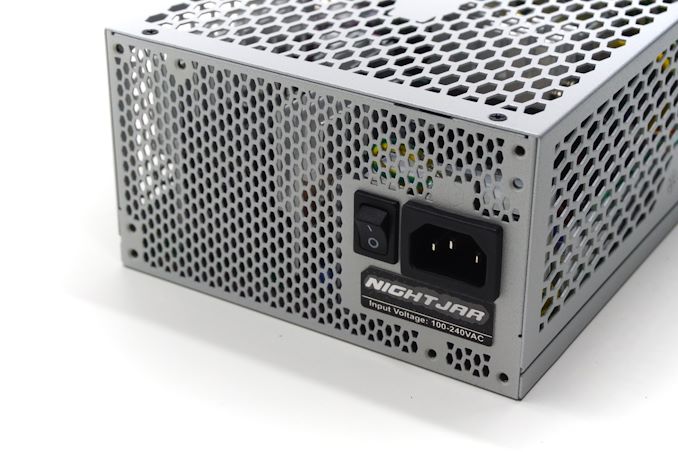 At the rear side of the PSU, we find the typical on/off switch and the AC cable receptacle. The interesting thing here is that SilverStone’s engineers placed two mounting hole patterns, allowing the mounting of the PSU to face upwards or downwards. Depending on the case that the PSU will be installed in, the user has to make an educated guess in order to ascertain the optimal orientation for effective passive air cooling. The front side hosts the connectors for the modular cables, all of which are black but are keyed and it is not possible to mix-up the connectors while attaching the cables. A basic legend is sprayed directly on the PSU’s chassis.

With no fan to talk about inside the SilverStone NJ700, we jump right away to the OEM of the platform, who is none other than SeaSonic. As we mentioned above, this is obvious to an experienced PC builder, as the external design of the PSU is, with the exception of the company’s logos, practically identical to that of the SeaSonic Prime Fanless. SilverStone usually employs Enhance for their fanless PSUs but, apparently, Enhance does not yet have a platform that can deliver this high a power output without any active cooling. 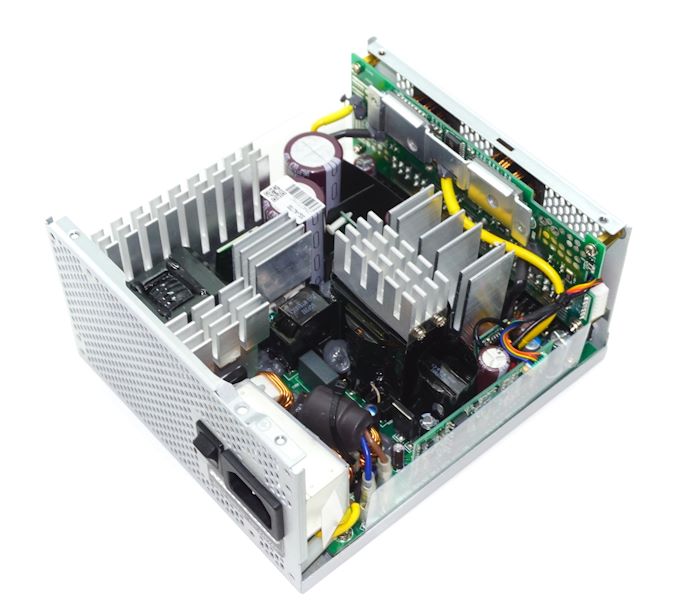 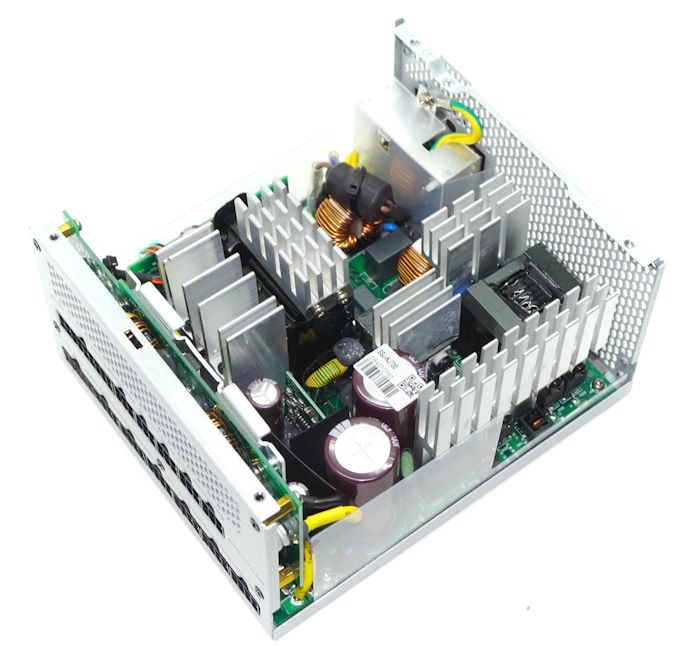 As expected from SeaSonic and for the nature of this particular design, the platform that the NJ700 is based upon is pretty much the best it could possibly be without employing cutting-edge digital electronics. That their engineers managed to squeeze 80Plus Titanium efficiency levels out of an analog design is quite a feat on its own. SeaSonic probably sticks with such designs due to their extremely high reliability and proven track record from decades of use. 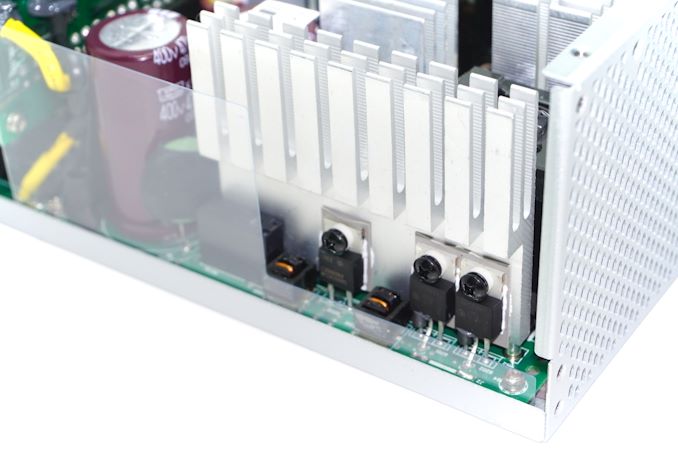 The insides of the SilverStone Nightjar NJ700 do not look much different than any other high quality 700W PSU. Even the heatsinks, though sizable, are not as substantial as one would expect from a passively cooled unit. Only the heatsink placed directly on the main transformer stands out compared to typical ATX products.

A generous filtering stage begins at the back of the AC receptacle, under a shield, with six Y capacitors, three X capacitors, and two filtering coils. There are two powerful rectifying bridges, with a sizable heatsink sandwiched in between them. There are two APFC capacitors, both made by Nippon Chemi-Con and rated at 400v/470μF each. 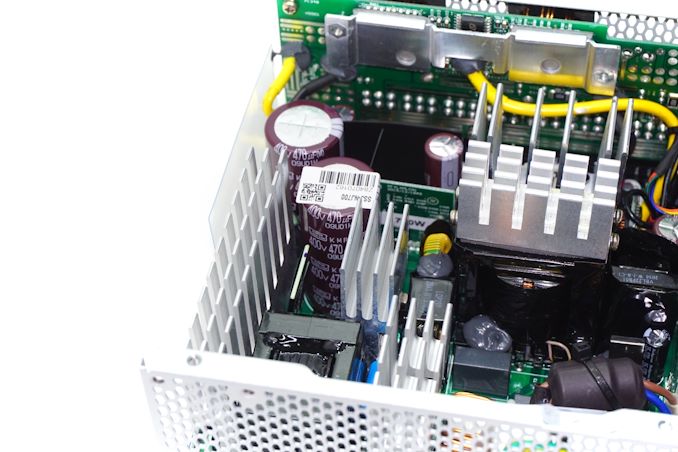 The primary side of the PSU is a standard full-bridge configuration with an LLC resonant converter. On the secondary side, four MOSFETs generate a single 12V line, with additional DC-DC converters present to generate the 5V and 3.3V lines from that. The difference is that both the four inverting transistors on the primary side and the four converting MOSFETs on the secondary side are top-tier products with extremely low drain-source resistance and gate charge, making them remarkably efficient.

Most of the secondary capacitors in the SilverStone NJ700 are polymer products made by FPCAP. A lot of them are placed on the secondary PCB that holds the connectors for the power cables for the final filtering of the DC power lines. Nevertheless, there are a few electrolytic capacitors present, one made by Rubycon and the rest by Nippon Chemi-Con, making the Nightjar NJ700 an all-Japanese affair.