Samsung updates its flagship lineup of smartphones yearly, and every year, there’s always one contentious issue: which is better, Snapdragon or Exynos? Exynos is the company’s in-house chipset that powers some of its phones every year, though nearly always, Europe is the one region guaranteed to get an Exynos chip. The U.S. tends to get a Snapdragon chip, and then it’s a toss-up in all of the other regions what chipset they’ll get. This year, India got a Snapdragon chip for the first time in the Samsung Galaxy S22 series, and like clockwork, Europe got Exynos.

As we’ve noted, it appears that retail units of the Samsung Galaxy S22 Ultra have some major problems. There were display flickering issues that have since been fixed, and performance problems too. Since publishing our article, I’ve had numerous consumers reach out to me on Twitter to say that they have had similar performance problems on their Exynos-based S22 units. I’ve even seen some users saying that it has gotten worse since the most recent update. Keep in mind as well that, at least according to renowned leaker Max Jambor, Samsung is aware of the performance problems that Exynos devices are currently facing.

To be fair to Samsung, I have also had numerous consumers tell me that they have no problems with their units. The purpose of this article is not to say that every user will have this experience, but there is a sizeable number of consumers who are complaining about the performance of their devices. I’ve now managed to get my hands on a Qualcomm Snapdragon 8 Gen 1-powered Galaxy S22 Ultra unit provided by Samsung PR in the U.S., and I put it to the test against my Exynos-powered retail unit purchased directly from Samsung Ireland. The results are probably in line with what you expected to happen.

For context, I was initially going to set up both of these devices as new to compare against each other, but I felt that any tests done would not be illustrative of an actual device that is currently in use. Benchmarks can be idealistic on an empty device with nothing installed, and people buy phones to use them beyond benchmarks, right?

Instead, developer options were utilized to prevent any background processes from running on the devices, and “don’t keep activities” was enabled on both devices. Where possible, these devices were also disconnected from the internet so that push notifications could not be received to interfere with the test. In essence, I ensured that no background processes were running, and I ensured that there was no network interference, either.

Both devices have also been updated to the latest available software versions, and build numbers and build date are below.

First and foremost, I benchmarked both devices side by side to test for differences. I ran a Geekbench 5 test on both of the Galaxy S22 Ultras that I have and asked Nils Ahrensmeier of TechnikNews to run it as well on his Exynos device.

These results already show a massive performance disparity between the Exynos variant of the Galaxy S22 Ultra and the Snapdragon variant, and even within two runs on the same unit. However, benchmarks aren’t everything, and it’s entirely possible for a phone to perform well while also not hitting the specific key indicators in a benchmark to net it a high score.

Sustained performance is one of the most important metrics to pay attention to when using a smartphone. If the sustained performance is poor, then you’ll have greatly reduced performance after what could potentially be a short period of time. I ran the test comparing both of these devices, and while both were consistent in their performance, the Snapdragon chipset was ahead the entire time. This still showed a much more reasonable outcome for the Exynos though and is not indicative of a problem in itself.

I was able to measure the peak power consumption of both of the Samsung Galaxy S22 Ultra devices in my possession while running the CPU Throttling Test. I was shocked to find that with the screen on its lowest brightness on both devices, at the peak of the test, the Exynos variant and the Snapdragon variant drained 11.84W and 7.76W respectively. That is a massive difference in power consumption and shows how inefficient the Exynos chipset can be. This means that in long-term usage, the Exynos 2200 device will have reduced battery life when under load.

To be clear, some of this is contributed to by other factors of the phone such as the screen. Nevertheless, there is a big difference in energy usage.

In my testing, I also identified a high idle drain meaning that users will experience lower standby times on Exynos devices than Snapdragon.

We’ve devised a real-world test of app launch speeds that launches a few popular apps we use each day in succession for 10 iterations. These apps are all “cold” launched on the device, meaning the app isn’t cached in memory before it’s launched. Timing is stopped when the app’s main activity first begins to draw, so there’s no waiting on content to load from the network. Thus, this test can determine how quickly a device can load an app from storage into memory, with the caveat being this test is sensitive to changes in the app and OS version. Given we are comparing two variants of the same phone though, it makes it much easier to draw direct conclusions. 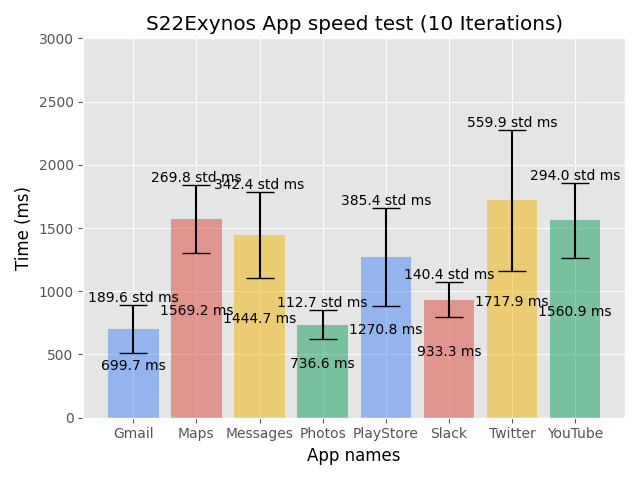 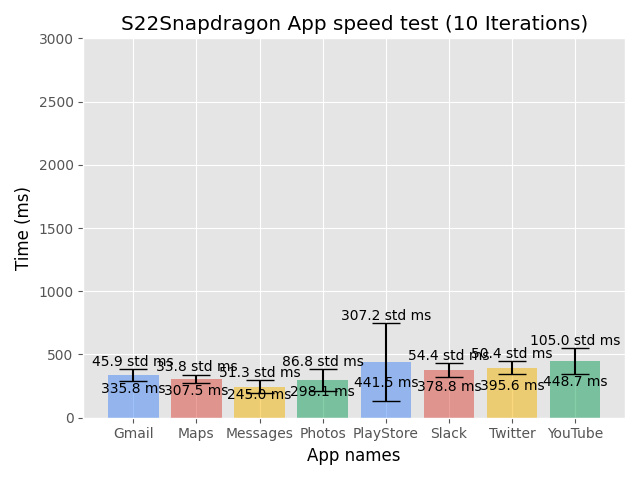 The Snapdragon device is much, much quicker to launch apps than the Exynos device. The Exynos device is one of the worst-performing devices in this metric that I have ever come across. On average, it takes apps over a full second to launch. That doesn’t sound like much, but imagine trying to do multiple things at once on your smartphone quickly? It gets grating fast when you meet every little hindrance along the way between you and your work.

Above, I’ve included a video to showcase just a few of the problems that I’ve noticed with the Exynos variant that does not exist on the Snapdragon variant. It’s included as evidence to show the real-world ramifications of some of these problems, and on both devices, I am logged into all of the same apps. I am not using either device differently than I normally would, and all of the same apps that I am logged into on the Exynos device are the same apps I was logged into on the OPPO Find N, the OnePlus 9 Pro, and the Google Pixel 6 Pro, to name a few.

All of these performance problems, from the delayed login to the UI stutters and the delayed S Pen integrations add up to form a poor experience. The phone is slow, it actively gets in the way of my work, and a software update did not improve the situation. It takes several seconds to even take a screenshot and crop it, whereas it’s a near-instantaneous process on the Snapdragon device. The Exynos 2200 experience is almost equivalent to using a budget device, with everything taking a second longer than expected from a top-tier flagship.

As I’ve already mentioned, I’ve had several users reach out to me to talk about the poor experience they have had with the Exynos 2200 variant of this device. Not one user with a Snapdragon chipset has reached out to me to complain about the same. I’m not sure if every Exynos user will have these problems, but a sizeable number certainly will. I even went so far as to try to enable high-performance mode in my battery settings but it didn’t make a difference. I’m also not seeing any signs of memory management being an issue, as there is free RAM available at all times.

In other aspects of these devices, I haven’t really noticed any differences. Cameras are close — if not on par — with each other (though I think a slight edge goes to Qualcomm from my own usage) and stabilization appears to be about the same for anything not too extreme. Walking around in Barcelona and filming works just as well on both devices, and I haven’t noticed any problems in that regard.

Exynos is important to the Android ecosystem, but this experience is unacceptable

When talking about Android smartphones, it pains me to say it, but Exynos is important. Qualcomm has a near-monopoly in the Android flagship market… though admittedly, MediaTek is catching up quickly. Having Samsung, the biggest Android OEM in the space, use its own chipsets in a significant part of its portfolio puts some pressure on Qualcomm, and in an ideal world, an equal number of users would desire an Exynos chipset as the number of users that desire a Qualcomm chipset.

It’s hard to say what the cause of these problems is. It could well be the Exynos 2200, as other Exynos in the past haven’t exactly been neck-to-neck against Snapdragon either. Or it could be that Samsung has coincidentally managed to mess up the software on Exynos variants. It doesn’t appear that Samsung has publicly given a statement to any publication about Exynos variants, as ComputerBase even says that while the company reached out, it declined to say whether an update would be coming.

In the past, like with the Exynos Galaxy S21 Ultra, gaming performance remained poor all through the product lifecycle, as the Exynos 2100 just couldn’t perform, and no amount of software updates could bring it up to par with its Snapdragon counterpart. Consequently, the Galaxy S21 Ultra failed to get a blanket recommendation as an excellent performer, because how well you could game on the device was very largely dependent on where you purchased the device from. And that is rather unacceptable considering that the phone maintained its launch price of ₹1,06,000/€1,249. 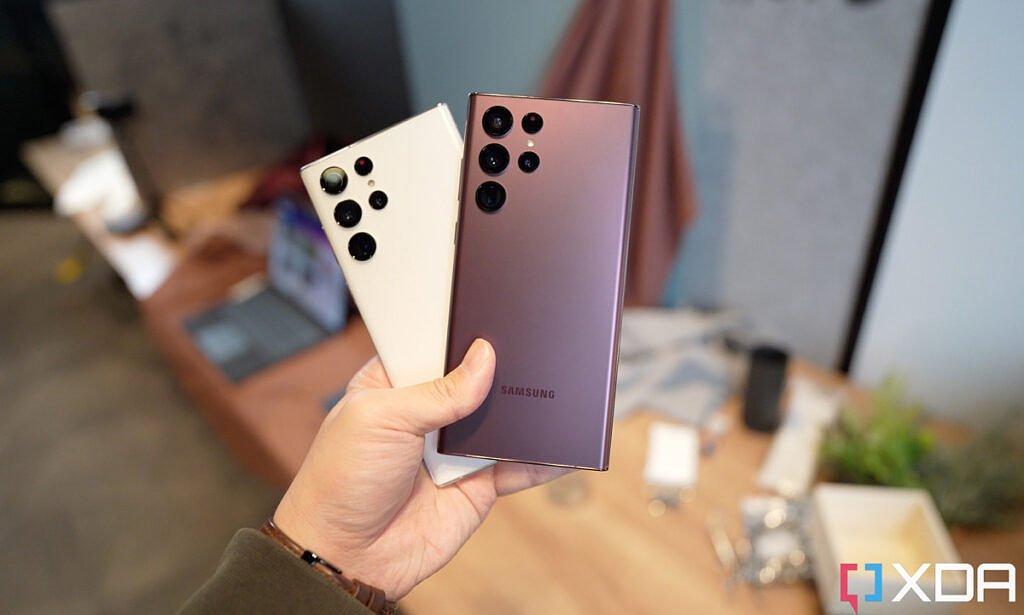 For now, the only thing I can say is to hold off on purchasing the Samsung Galaxy S22 Ultra if you live in Europe. As it stands currently, the Exynos 2200 Galaxy S22 Ultra is completely unusable as a daily driver. It’s incredibly laggy and the battery life is terrible, too. It hasn’t improved whatsoever, and I’ve had to top my phone off multiple times during the day. I find it hard to recommend a product that costs this much and performs this poorly, and I would be doing a disservice as a reviewer if I did not highlight these issues that I face on my retail unit. As long as other OEMs offer top-tier flagships that consistently perform like top-tier flagships in your region, there’s very little reason to buy the Exynos Galaxy S22 series and play a lottery of whether you will get a device that performs like a top-tier flagship. Some Exynos users get a good device, some don’t — and that’s unacceptable.

In closing, the Snapdragon Galaxy S22 Ultra and the Exynos Galaxy S22 Ultra are two entirely different smartphones in my eyes. When you buy the latest Samsung Galaxy S series smartphone, you’re buying an entirely different smartphone depending on the region that you live in. In nearly any other smartphone series, purchasing a device in one country would not mean that it would perform exceedingly better than the same device bought in another country, but that’s exactly the dichotomy that Samsung has created.

The post The Snapdragon Samsung Galaxy S22 Ultra is way better than the Exynos appeared first on xda-developers.